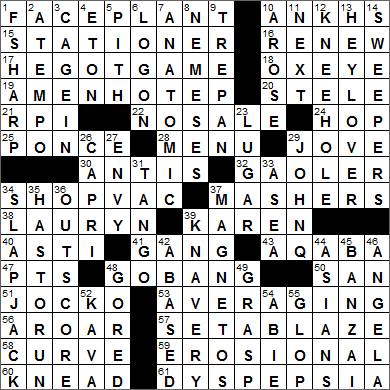 Today’s Wiki-est, Amazonian Googlies
Across
10. Signs of life : ANKHS
The ankh was the ancient Egyptian hieroglyphic character for “eternal life”. The ankh wasn’t just used in inscriptions but was often fashioned into amulets and as surrounds for mirrors (perhaps symbolizing a view into another world). The ankh is also known as “the key of the Nile” and “crux ansata” (Latin for “cross with a handle”).

15. Paper pusher? : STATIONER
“Stationery” is a noun describing writing materials and office supplies, items that are sold by a stationer. Centuries ago, a stationer was someone who sold goods from a shop or a “station”, from a fixed, stationary stall.

17. 1998 Spike Lee film : HE GOT GAME
“He Got Game” is a movie written and directed by Spike Lee, released in 1998. It is a sports drama about a high school basketball player, with a father in prison played by Denzel Washington.

18. Sunflowerlike flower : OXEYE
Oxeyes are in the daisy family of plants.

19. Royal name in ancient Egypt : AMENHOTEP
There were four pharaohs of Ancient Egypt with the name Amenhotep. The name “Amenhotep: translates as “Amun is satisfied”.

20. The Rosetta Stone, for one : STELE
Stelae (singular “stele” or “stela”) were used all over the world, sometimes as territorial markers and sometimes to commemorate military victories. In later times stelae were commonly erected as commemorative markers in graveyards or other religious sites.

Rosetta is a coastal city and port on the Mediterranean coast of Egypt. The Rosetta Stone is an Ancient Egyptian artifact of tremendous importance in deciphering Egyptian hieroglyphics. Carvings on the stone are actually three translations of the same passage of prose, one in Egyptian hieroglyphics, one in Egyptian Demotic language, and one in classical Greek. The stone was discovered by the French military during Napoleon’s 1798 campaign in Egypt. Before the French could get it back to France, the stone somehow ended up in enemy hands (the British), so it is now on display in the British Museum. Ownership of the stone is very much in dispute. The French want it, and understandably, the Egyptians would like it back.

21. Engineer’s home, for short : RPI
The Rensselaer Polytechnic Institute (RPI) is a private school in Troy, New York. The university is named after its founder Stephen Van Rensselaer who set up the school in 1824. The goal of RPI has always been the “application of science to the common purposes of life”, an objective set by the founder. Given that, the name for the school’s sports teams is quite apt: the Engineers.

29. Pantheon member : JOVE
Jupiter, also known as Jove, was the king of the gods in the Roman tradition, as well as the god of sky and thunder. He was the Roman equivalent to the Greek god Zeus.

The Pantheon in Rome was built as a temple to all the gods of Ancient Rome. Even though the Pantheon was built almost two thousand years ago, the dome at its center remains the world’s largest unreinforced concrete dome.

32. Key employer in England? : GAOLER
Both “jail” and “gaol” are pronounced the same way, mean the same thing and are rooted in the same Latin word for “cave”. The spelling “gaol” is seen quite often in the UK, although it is gradually being replaced with “jail”. The “gaol” spelling has Norman roots and tends to be used in Britain in more formal documentation.

37. Advance men? : MASHERS
“Masher” is a slang term for a man who makes persistent and unwelcome advances to women.

38. “The Miseducation of ___ Hill” (1998 Grammy-winning album) : LAURYN
Lauryn Hill is a singer-songwriter from South Orange, New Jersey who is best known as a member of the band called the Fugees (from 1994 to 1996). Off stage, Hill is known for having five children with Rohan Marley, the son of reggae icon Bob Marley. She was also in the public eye in 2010 when she served 3 months in jail for tax evasion.

39. Allen of Hollywood : KAREN
The actress Karen Allen is best known for playing Marion Ravenwood in the “Indiana Jones” series of films, opposite Harrison Ford in the title role. Some might remember her film debut, in the madcap 1978 comedy “National Lampoon’s Animal House”. Off screen, she loves knitting and has her own textile company called Karen Allen Fiber Arts. And, she also teaches yoga!

40. Moscato bianco grape product : ASTI
Asti is in the Piedmont region of northwestern Italy. It is perhaps most famous for its Asti Spumante sparkling white wine. Moscato d’Asti is produced from the same grape (Moscato Bianco) but is a much sweeter wine with a lower alcohol content. It is usually served as a dessert wine.

43. City across the border from Eilat : AQABA
The coastal city of Aqaba is the only seaport in the country of Jordan. The city lies at the very northern tip of the Gulf of Aqaba, which is off the Red Sea.

48. Game also called Five in a Row : GOBANG
Gomoku (also called “Gobang” and “Five in a Row”) is a strategy game played on a board or with pencil and paper. The game originated in Japan, and the name “Gomoku” translates as “five pieces”. It sounds like tic-tac-toe but with the goal to get five of one player’s marks/pieces in a row.

61. Upset : DYSPEPSIA
The prefix “dys-” comes from the Greek for “bad”. Example of the use of the prefix would be: dyslexia (bad + word), dyspepsia (bad + digested).

Down
1. Key that’s oxymoronic at school? : F-SHARP
The word “oxymoron” is in itself an oxymoron, as it is derived from the Greek words “Oxys” and “moros” meaning “sharp” and “stupid”.

2. At the original speed, musically : A TEMPO
“A tempo” is a Italian for “in time”. The phrase is used on a musical score to instruct a performer to return to the main tempo of the piece, perhaps after slowing down or speeding up.

4. “A Yank at ___” (Mickey Rooney film) : ETON
“A Yank at Eton” was released in 1942, and is a sequel to the 1938 comedy “A Yank at Oxford”. The film had some use as “propaganda” as the movie’s message was that “Yanks” and “Limeys” could get along. This was helpful as American forces were pouring into the UK in preparation for the invasion of Europe during WWII.

8. Fearsome foes : NEMESES
Nemesis was a Greek goddess, the goddess of retribution. Her role was to make pay those individuals who were either haughty or arrogant. In modern parlance, one’s nemesis (plural “nemeses”) is one’s sworn enemy, often someone who is the exact opposite in character but someone who still shares some important characteristics. A nemesis is often someone one cannot seem to beat in competition.

23. Longtime Indiana senator defeated in 2012 : LUGAR
Richard “Dick” Lugar served as Republican Senator representing Indiana in the US Congress from 1977 to 2013. He was the ranking member on the Senate Foreign Relations Committee, and is noted for his work to dismantle existing weapons of mass destruction all around the world.

26. Mediterranean vacation spot : CAPRI
The island of Capri off the coast of Southern Italy has been a tourist resort since the days of ancient Rome. Capri is home to the famous Blue Grotto, a sea cave that is illuminated with sunlight that’s colored blue as it passes through the seawater into the cave. Natives of Capri are known as Capriotes.

27. “Men always hate most what they ___ most”: H. L. Mencken : ENVY
H. L. Mencken was a journalist and essayist from Baltimore. Mencken reported on the Scopes trial of 1925 and was the writer who dubbed it the “Monkey Trial”.

29. Public figure? : JOHN Q
We sometimes use the term “John Q. Public” for the man in the street, the common man. The original John Q. Public was a cartoon character created by Vaughn Shoemaker for the “Chicago Daily News”.

31. “Whatever Lola Wants,” e.g. : TANGO
“Whatever Lola Wants” is a song from the musical “Damn Yankees”. “Damn Yankees” is actually yet another version of the classic German legend of “Faust”, set in Washington, D.C. in the fifties. The show was written by Richard Adler and Jerry Ross, a production that turned out to be a very successful follow-up to their prior hit, “The Pajama Game”. The future was looking really rosy for Adler and Ross but, sadly, Jerry Ross died of an obstructive lung disease only a few weeks after “Damn Yankees” opened on Broadway in 1955. He was just 29 years old.

34. Raucous card game : SLAPJACK
Slapjack is a children’s card game. Players alternately turn up cards on a pile until a jack is seen, at which point all players rush to slap a hand over the pile.

37. Alternators in some internal-combustion engines : MAGNETOS
A magneto is an electric generator that produces an alternating current, and as such can be classified as an alternator. Hand-cranked magnetos were used in old telephone systems to create a ringing signal at the other end of the line. Magnetos are also used in some gas engines to produce current for the spark plug, for example in lawnmowers and chainsaws.

39. Acts of a scalawag : KNAVERY
We’ve been using “knave” to mean a cad since about 1200, and as an alternative name for the jack in a deck of cards since the mid-1500s. “Knave” comes from the Old English word “cnafa”, a “boy, male servant”.

The American word “scalawag” meaning “rogue” was originally borrowed as a nickname for southern white people who supported reconstruction after the Civil War.

44. The Golden Horde, e.g. : ASIANS
The Golden Horde was a group of Mongols who ruled over what is now Russia, Ukraine, Kazakhstan, Moldova and the Caucasus, from the 1240s until 1502. It has been suggested that the name of the group derives from the yellow tents used by the rulers of the Golden Horde. And, the Golden Horde’s influence and rule led to the term “horde” entering the English language, via many languages spoken in Slavic Eastern Europe.

45. War cry : BANZAI!
During WWII the Japanese infantry when making mass assaults would often yell out “Banzai!”, a shout of courage, and encouragement, as they ran into enemy fire. These mass assaults became known by the Allied soldiers as “banzai attacks”. The term “banzai” is not limited to use in times of war, but is used like a toast wishing long life, as “banzai” translates into “ten thousand years”.

46. First name in European politics : ANGELA
The formidable politician Angela Merkel is the current Chancellor of Germany, the country’s head of state. Merkel is the first female German Chancellor and when she chaired the G8 in 2007 she became only the second woman to do so, after the UK’s Margaret Thatcher. Merkel grew up in East Germany under Communist rule.

52. Herbal stress reliever from Polynesia : KAVA
Kava is a plant found in the western Pacific. Its roots are used to make an intoxicating drink also called kava, which acts as a sedative.

54. “___ Baby” (song from “Hair”) : ABIE
The full name of the famed stage show from the sixties is “Hair: The American Tribal Love-Rock Musical”. This controversial work outraged many when it was first performed in the sixties as it attacked many aspects of life at the time. For example, the song “Air” is a satirical look at pollution, sung by a character who comes onto the stage wearing a gas mask. The opening lines are “Welcome, sulfur dioxide. Hello carbon monoxide. The air … is everywhere”. I’ve never had the chance to see “Hair” in a live production, but it’s on “the bucket list” …