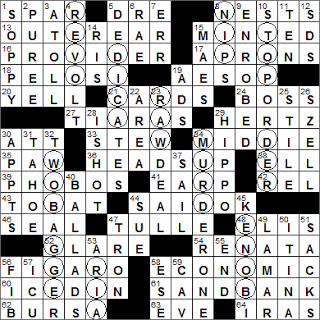 CROSSWORD SETTER: David J. Kahn
THEME: Heads Up … our themed answers contain hidden words, shown by the circled letters. The hidden words are all written UP and are often seen preceding the word HEAD:

36A. Warning appropriate for this puzzle? : HEADS UP!

Today’s Wiki-est, Amazonian Googlies
Across
5. Dr. who’s done 19-Down for Dr Pepper : DRE
(19D. Commercials : ADS)
Dr. Dre is the stage name of rapper Andre Romelle Young. Dr. Dre is known for his own singing career as well as for producing records and starting the careers of others such Snoop Dogg, Eminem and 50 Cent.

13. Auricle’s site : OUTER EAR
“Auricle” is an alternative term for the pinna, the visible part of the ear that sits outside of the head. “Pinna” is the Latin for “feather” and is used anatomically for a wing, fin or other external appendage.

18. Former House leader Nancy : PELOSI
Nancy Pelosi is a former Speaker of the House, the 60th person to hold that position. Ms. Pelosi represents a district not far from here, which covers most of San Francisco. She was the first Californian, the first Italian-American and the first woman to be Speaker of the House. As Speaker, she was also second in line, after the Vice President, to take over if President Obama could not finish his term. That made Nancy Pelosi the highest-ranking female politician in US history.

19. “The Fox and the Crow” storyteller : AESOP
“The Fox and the Crow” is one of Aesop’s Fables. In the story, a crow is eating a piece of cheese in a tree. A fox wants the cheese, and flatters the crow and goads it into singing. When the song opens its bill to let out a caw, the cheese falls to the ground and is eaten by the fox.

21. 2011 World Series champs, informally : CARDS
The St. Louis Cardinals baseball team was originally called the “Brown Stockings”, changing their name to the “Perfectos” in 1899. The new name obviously didn’t go down well with the locals, as the owners changed it one year later to the Cardinals.

29. Alternative to Enterprise : HERTZ
The Hertz car rental company was started in 1918 by Walter L. Jacobs in Chicago. He began with just twelve model T Ford cars available for rent. In 1923, the car rental operation was bought out by John D. Hertz who incorporated it into his truck and coach manufacturing company.

34. Navy student, informally : MIDDIE
A “middie” is a midshipman.

39. Moon of Mars : PHOBOS
Mars has two moons, the larger of which is Phobos and the smaller is Deimos. “Phobos” is the Greek word for “fear”, and “Deimos” is Greek for “dread”.

41. Tombstone lawman : EARP
Wyatt Earp is famous as one of the participants in the gunfight at the O.K. Corral. Earp was a city policeman in Wichita, Kansas and also in Dodge City, Kansas. Earp was also deputy sheriff in Tombstone, Arizona where the O.K. Corral gunfight took place. Years later, Earp joined the Alaska Gold Rush and with a partner built and operated the Dexter Saloon in Nome.

48. Jodie Foster and Meryl Streep, collegiately : ELIS
“Eli” is the nickname for a graduate of Yale University, a term used in honor of the Yale benefactor Elihu Yale.

The wonderful Jodie Foster got her big break in movies early in her life, playing a very young prostitute in Martin Scorsese’s 1976 film “Taxi Driver”. Sadly, her appearance in “Taxi Driver” led to her being stalked by an obsessed John Hinckley, Jr. Hinckley called Foster on the phone, sent her love letters, and followed her on campus while she was attending Yale. In 1981, Hinckley famously shot and wounded President Reagan, claiming that he believed an assassination of the President would impress Foster.

Meryl Streep has had more nominations for an Academy Award than any other actor, a tribute to her talent and the respect she has earned in the industry. I am not a huge fan of her earlier works but some of her recent movies are now on my list of all-time favorites. I recommend “Mamma Mia!” (you’ll either love it or hate it!), “Julie & Julia”, “It’s Complicated” and ”Hope Springs”.

54. Opera’s Tebaldi : RENATA
Renata Tebaldi was an Italian soprano, popular just after the end of WWII. Tebaldi had a much talked about rivalry with Maria Callas, one that was perhaps blown out of proportion in the press. Tebaldi and Callas ending up singing together in a touring company in 1951 and when asked by a reporter about the differences between the two singing voices, Callas said it was like comparing “champagne and cognac”, to which a bystander remarked “no, with Coca Cola”. The “champagne and Coca Cola” comparison was quoted in the paper, and attributed to Callas. That didn’t help …

Figaro is the central character in at least two operas: “The Barber of Seville” by Rossini, and “The Marriage of Figaro” by Mozart. The two storylines are based on plays by Pierre Beaumarchais, with one basically being a sequel to the other.

58. One of the “E’s” in E.E.C. : ECONOMIC
The European Economic Community (EEC) was also called “the Common Market”. The EEC was a NAFTA-like structure that was eventually absorbed into today’s European Union (EU).

Down
2. Food processor setting : PUREE
A “purée” is a food that has been made smooth by straining or blending. “Purée” is a French term, which I believe is now used to mean “pea soup” (more completely written as “purée de pois”). The French verb “purer” means “to strain, clean”, from the Latin “purare” meaning “to purify, clean”.

3. Bikini, for one : ATOLL
The origin of the name “bikini”, a type of bathing suit, seems very uncertain. My favorite story is that it is named after the Bikini Atoll, site of American A-bomb tests in the forties and fifties. The name “bikini” was chosen for the swim-wear because of the “explosive” effect it had on men who saw a woman wearing the garment!

10. “Buy” or “sell” directive at a specified price : STOP ORDER (giving “pothead” & “redhead”)
A stop (also “stop-loss”) order is an order to buy or sell a stock once it reaches a specific price. When that “stop price” is reached, the stop order becomes a market order and the sale or purchase is made.

12. 1960s protest grp. : SDS
Students for a Democratic Society (SDS) was an activist group in the sixties. The SDS organized the largest student strike in the history of the United States on 26 April 1968, with about a million students staying away from class that day. The “Students for a Democratic Society” name was revived in 2006 with the foundation of a new US-based student organization with left wing beliefs. Today’s SDS was founded by a pair of high school students from Greenwich Village, New York.

14. Sue Grafton’s “___ for Ricochet” : R IS
Sue Grafton writes detective novels, and her “alphabet series” features the private investigator Kinsey Millhone. She started off with “A Is for Alibi” in 1982 and is working her way through the alphabet, most recently publishing “’W’ is for Wasted” in 2009. Apparently Ms. Grafton is working on her “X is for …” novel, and has already decided that “Z is for Zero” will be the final title in the series. What a clever naming system!

15. Fannie ___ (securities) : MAES
The Federal National Mortgage Association is commonly called Fannie Mae, a play on the initialism FNMA. Fannie Mae was founded in during the Great Depression as part of President Roosevelt’s New Deal.

25. Arena entrance feature : STILE
A stile is a structure allowing people to pass over or through a fence, while at the same time preventing livestock from escaping. The derivative term “turnstile” describes a revolving structure in a wall or fence that allows the controlled passage of people.

28. “___ the Sheriff” (1974 #1 hit) : I SHOT
The Bob Marley song “I Shot the Sheriff” tells of someone who killed the local sheriff. Marley wanted to say “I shot the police”, but figured the government wouldn’t like that too much. He also stated that the song is about justice.

31. North America’s largest alpine lake : TAHOE
Lake Tahoe is up in the Sierra Nevada mountains, right on the border between California and Nevada. Lake Tahoe is the largest alpine lake in the country, and the largest lake in general, behind the five Great Lakes. It’s also the second deepest lake, with only the beautiful Crater Lake in Oregon being deeper. Given its location, there are tall casinos that sit right on the shore on the Nevada side of the state line where gambling is legal.

32. Double, in baseball lingo : TWO-BAGGER (giving “bowhead” & “egghead”)
The bowhead whale is a large whale living in Arctic and sub-Arctic waters that has a massive skull. The bowhead has the largest mouth of any living creature.

34. Certain homicide, in police lingo : MURDER ONE (giving “drumhead”)
There are two degrees of murder in US legal system, as well as voluntary and involuntary manslaughter. Basically, these are defined as:

40. “Oh! Susanna” and others : BALLADS
“Oh! Susanna” is a song that was published in 1848, written by Stephen Foster. The song is often called “Banjo on My Knee”, an understandable slip given the words of the chorus. “Oh! Susanna” came to be associated with the Forty-Niners, the miners who travelled to California in the 1849 Gold Rush. The lyrics were changed to suit the Gold rush theme with “Alabama” being replaced by “California”, and “banjo” being replaced by “washpan”.

45. Obi-Wan ___ : KENOBI (giving “bonehead”)
Obi-Wan Kenobi is one of the more beloved of the “Star Wars” characters. Kenobi was portrayed by two fabulous actors in the series of films. As a young man he is played by Scottish actor Ewan McGregor, and as an older man he is played by Alec Guinness.

47. High-tech 1982 Disney movie : TRON
Released in 1982, Disney’s “Tron” was one of the first mainstream films to make extensive use of computer graphics. The main role in the movie is played by Jeff Bridges. The original spawned a 2010 sequel called “Tron: Legacy”, as well as a 2012 TV show called “Tron: Uprising”.

49. Tennessee senator ___ Alexander : LAMAR
Lamar Alexander is one of the US Senators representing Tennessee. Alexander is a great classical and country piano player, and you can actually hear him playing on a re-recording that Patti Page made of her 1950 hit “Tennessee Waltz”.

50. Turner autobiography : I, TINA
“I, Tina” is the 1986 autobiography of Tina Turner. The book was so successful it was adapted into a movie called “What’s Love Got to Do With It?” The film version was released in 1993 and starring Angela Bassett as Tina Turner.

56. Lie a little : FIB
To “fib” is to “to tell a lie”. The term likely comes from “fibble-fable” meaning “nonsense”, itself derived from “fable”.

59. Cleveland cager, for short : CAV
The Cleveland Cavaliers are the professional basketball team based in Cleveland, Ohio. The Cavs joined the NBA as an expansion team in 1970.