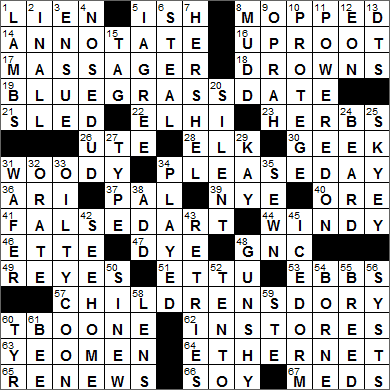 CROSSWORD SETTER: Alex Bajcz
THEME: ST to D … today’s themed answers are common phrases ending with a word starting with ST-, but that ST- has been changed to D-.

Today’s Wiki-est, Amazonian Googlies
Across
1. Collateral, of a sort : LIEN
A lien is the right that one has to retain or secure someone’s property until a debt is paid. When an individual takes out a car loan, for example, the lending bank is usually a lien holder. The bank releases the lien on the car when the loan is paid in full.

19. Romantic night in Kentucky? : BLUEGRASS DATE (from “Bluegrass State”)
Kentucky is nicknamed the Bluegrass State, a reference to the bluegrass found in abundance around the state. The state is named for the Kentucky River, which in turn may take its name from an Iroquoian word meaning “on the meadow” or “on the prairie”.

21. Vehicle in “Frozen” : SLED
“Frozen” is a 2013 animated feature from Walt Disney Studios that is based on the Hans Christian Andersen fairy tale “The Snow Queen”.

22. Textbook market shorthand : ELHI
“Elhi” is an informal word used to describe anything related to schooling from grades 1 through 12, i.e. elementary through high school.

23. Savory and sage : HERBS
Summer savory is an annual herb that is used in some cuisines of the world in the same way that we tend to use sage here in the US. There is a related species called winter savory that is a little more bitter, and that is a perennial.

26. Sport-___ : UTE
A utility vehicle is often called a “ute” for short. Nowadays one mainly hears about sports utes and crossover utes.

28. Venison source : ELK
“Venison” is the meat of a deer. In days of yore, the term applied not just to deer, but to any large game. The word “venison” ultimately derives from the Latin “venare” meaning “to hunt”.

31. Friend of Buzz in “Toy Story” : WOODY
1995’s “Toy Story” was the world’s first feature-length computer-animated movie. “Toy Story” was also the studio Pixar’s first production. The main roles in the film are Woody and Buzz Lightyear, voiced by Tom Hanks and Tim Allen respectively. Hanks was the first choice to voice Woody, Allen was asked to voice Buzz after Billy Crystal turned down the role.

34. “Come on, Doris”? : PLEASE, DAY (from “please stay”)
The actress and singer Doris Day was born Doris Kappelhoff in Cincinnati, Ohio. Day made more than 650 recordings as a singer with Columbia Records, and also appeared in 39 movies. Outside the world of entertainment, she has been an ardent supporter of animal rights. She now lives in Carmel-by-the-Sea in California, along with her many pets and stray animals that she has adopted over the years.

36. Gold of “Entourage” : ARI
Ari Gold is a fictional character in the HBO series “Entourage”. “Entourage” tells the story of a rising film star, Vincent Chase (played by Adrian Grenier), a native of New York but now learning to handle himself in Hollywood. Vincent’s Hollywood agent is Ari Gold, played by Jeremy Piven.

39. Nevada county with part of Death Valley National Monument : NYE
Nye County, Nevada is home to the Nevada Test Site that was used for testing nuclear weapons from the fifties through the nineties.

41. Counterfeit Dodge? : FALSE DART (from “false start”)
The Dodge Dart was originally produced by Chrysler from 1960 to 1976 in North America. The Dodge Dart name was resurrected in 2013 when Chrysler introduced it as a new compact passenger automobile.

48. Vitamin World competitor : GNC
General Nutrition Centers (GNC) is a retailer of health and nutrition supplements based in Pittsburgh, Pennsylvania. The company was founded in 1935 as a small health food store in downtown Pittsburgh. There are now about 5,000 stores in the US. The GNC slogan is “Live Well”.

51. “I thought you had my back!” : ET TU?!
It was Shakespeare who popularized the words “Et tu, Brute?” (And you, Brutus?), in his play “Julius Caesar”, although the phrase had been around long before he penned his drama. It’s not known what Julius Caesar actually said in real life just before he was assassinated on the steps of the Senate in Rome.

57. Fishing boat at summer camp? : CHILDREN’S DORY (from “children’s story”)
A dory is a small boat, around 20 feet long with a shallow draft, a flat bottom and a sharp bow. Dories are commonly used for fishing.

60. Pickens who’s a 33-Down : T BOONE
T. Boone Pickens is a wealthy businessman who made most of his fortune in the oil and gas industries. Pickens has donates a lot of his wealth, particularly to his alma mater Oklahoma State University. He has signed up to the Giving Pledge inaugurated by Bill Gates and Warren Buffett, and has committed to giving away half his wealth to charity.

64. Alternative to Wi-Fi : ETHERNET
Ethernet is the name given to a standardized configuration of local area networks (LANs). An ethernet cable is that one that has a connector on the end that looks like a regular telephone connector, but is about twice as wide. Ethernet dates back to the mid seventies, when it was developed by the Xerox Corporation.

66. Tempeh base : SOY
Tempeh is a soy product that originated in Indonesia. It is made from soybeans that have been partly cooked and fermented. I’ve had quite a bit of tempeh used as a meat substitute in vegetarian dishes. It doesn’t have an appealing texture to me, so I’m not a fan …

Down
6. Take home … in more ways than one? : STEAL
I guess that would be stealing something valuable and taking it home, and stealing home in baseball …

7. ___ Greene, character on “The Walking Dead” : HERSHEL
“The Walking Dead” is a horror television show that made by AMC. There are lots of flesh-eating zombies featured, so I won’t be seen “dead” watching it …

8. Harvey ___ College : MUDD
Harvey Mudd was a mining engineer, and president of Cyprus Mines Corporation. He lent his name to Harvey Mudd College, a science and engineering college in Claremont, California.

9. TV personality with the best seller “What I Know for Sure” : OPRAH
What can you say about Oprah Winfrey? Born into poverty to a single mother and with a harrowing childhood, Oprah is now the greatest African American philanthropist the world has ever known. Oprah’s name was originally meant to be “Orpah” after the Biblical character in the Book of Ruth, and that’s how it appears on her birth certificate. Apparently folks had trouble pronouncing “Orpah”, so she’s now “Oprah”.

13. Drunk’s woe : DTS
The episodes of delirium that can accompany withdrawal from alcohol are called Delirium Tremens (the DTs). The literal translation of this Latin phrase is “trembling madness”.

15. Graffiti mark : TAG
“Graffiti” is the plural of “graffito”, the Italian for “a scribbling”. The word was first used to describe ancient inscriptions on the walls in the ruins of Pompeii.

29. Big name in jewelry : KAY
Kay Jewelers is perhaps the most famous store brand owned by Sterling Jewelers. Sterling is the largest fine jewelry chain in the country, with the company’s main competitor being Zale Corporation.

33. David or Charles Koch : OIL TYCOON
Koch Industries is a huge company with diverse interests, but with the oil industry at its core. The company was founded in 1940 by Fred C. Koch. Reportedly, Koch is the second largest privately-held company in the US, after Cargill. Today Koch Industries is owned by two of Fred’s sons: Charles and David H. Koch. Famously, the Koch Brothers are known for contributing hundreds of million dollars to conservative political causes and candidates.

45. Student housing in Fairbanks? : ICE DORM (from “ice storm”)
Fairbanks is the second largest city in Alaska (second to Anchorage), and home to almost 100,000 residents in the metropolitan area. The city was founded in 1901 and is named for Charles W. Fairbanks, a senator from Indiana who served as US Vice President during Theodore Roosevelt’s second term as President.

50. Muscle-bone binder : SINEW
Sinew is another name for a tendon. Tendons are bands of collagen that connect muscle to bone. Tendons are similar to ligaments and fasciae, which are also connective tissue made out of collagen, but ligaments join bone to bone, and fasciae connect muscle to muscle. We also use the term “sinew” to mean muscular power.

59. Geneviève, for one: Abbr. : STE
St. Genevieve is the patron saint of Paris, in the Roman Catholic tradition. In the year 451CE, she led what was termed a “prayer marathon” that many believed saved Paris from being sacked by Attila the Hun.

60. ___ : Tuesday :: Odin : Wednesday : TYR
Týr is the Norse god of single combat, victory and heroic glory. According to legend, Týr showed great courage when he and his fellow gods were attempting to shackle the wolf monster called Fenrir. The wolf was tricked into accepting bindings that were actually magical ribbons of great strength. Fenrir submitted to the bonds because Týr agreed to place his hand in the wolf’s mouth, as a gesture of assurance that the ribbon was harmless. When Fenrir recognized the deceit, he bit off Týr’s hand. As a result, the god Týr is almost always depicted with only one hand.