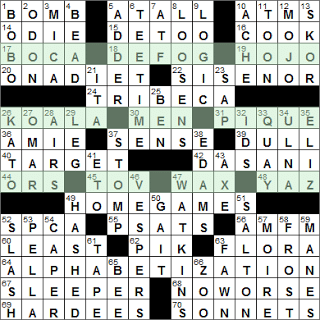 CROSSWORD SETTER: Don Gagliardo & Zhouqin Burnikel
THEME: Alphabetization … We have all of the consonants in the alphabet used, in alphabetical order, in rows 3, 6 and 9 in today’s grid:

64A. One way of ordering things, like all the consonants in rows three, six and nine ALPHABETIZATION

17. ___ Raton, Fla. BOCA
The name of the city of Boca Raton in Florida translates from Spanish as “Mouse Mouth”. There doesn’t seem to be a definitive etymology of the name but one plausible explanation is a nautical one. “Boca”, as well as meaning “mouth” can mean “inlet”. “Ratón”, as well as meaning “mouse” was also used to describe rocks that chewed away at a ship’s anchor cable. So possibly Boca Raton was named for a rocky inlet.

19. Once-popular roadside chain, familiarly HOJO
The Howard Johnson (sometimes “HoJo”) chain of hotels and restaurants was the largest restaurant chain in the US in the sixties and seventies. There are only two HoJo restaurants left now. One is in Bangor, Maine and the other is in Lake Placid, New York. I just realized that I’ve been in both those restaurants …

24. Manhattan neighborhood next to SoHo TRIBECA
TriBeCa is a clever little acronym that expands into “TRI-angle BE-low CA-nal Street”. The name was developed by local residents who basically copied the naming technique used by residents of the neighboring area of SoHo, which is short for “SO-uth of HO-uston Street”.

26. ___ bear KOALA
The koala bear really does look like a little bear, but it’s not even closely related. The koala is an arboreal marsupial and a herbivore, native to the east and south coasts of Australia. Koalas aren’t primates, and are one of the few mammals other than primates who have fingerprints. In fact, it can be very difficult to tell human fingerprints from koala fingerprints, even under an electron microscope. Male koalas are called “bucks”, females are “does”, and young koalas are “joeys”. I’m a little jealous of the koala, as it sleeps up to 20 hours a day …

31. Arouse, as curiosity PIQUE
The words “whet” and “pique” can both be used in the sense of sharpening or awaking one’s interest or desire.

40. Walmart competitor TARGET
Target Corporation was founded by George Draper Dayton in 1902 in Minneapolis, Minnesota as Dayton Dry Goods Company. Dayton developed into a department store, and the company opened up a discount store chain in 1962, calling it Target. Today Target is the second-largest discount retailer in the country, after Walmart.

Walmart (previously “Wal-Mart”) takes in more revenue than any other publicly traded company in the world. Over in my homeland, Walmart operates under the name Asda. Walmart’s worldwide headquarters are in Bentonville, Arkansas, the home of Sam Walton’s original Five and Dime. You can actually go into the original store, as it is now the Walmart Visitor Center.

Fiji Water, as you might guess, is a brand of water from the Fiji Islands. I just think that bottling water and sending it around the world is absolutely insane …

44. Where scrubs are worn, for short ORS
Operating room (OR)

48. Bosox great Carl, familiarly YAZ
Yaz is the nickname for Carl Yastrzemski, who played his whole career with the Boston Red Sox.

52. Pet lovers’ org. SPCA
Unlike in most developed countries, there is no “umbrella” organization in the US with the goal of preventing cruelty to animals. Instead there are independent organizations set up all over the nation using the name SPCA. Having said that, there is an organization called the American Society for the Prevention of Cruelty to Animals (ASPCA) that was originally intended to operate across the country, but really it now focuses its efforts in New York City.

62. Commercial ending with Water -PIK
Waterpik is a brand name of oral irrigator, a device that uses a stream of water to remove food debris and dental plaque from the teeth. There are claims made that water irrigators are more effective than dental floss.

69. Sister fast-food chain of Carl’s Jr. HARDEE’S
Hardee’s a chain of fast-food restaurants that was founded in 1960. The first restaurant was opened in Greenville, North Carolina by Wilber Hardee. Hardee’s is now owned by CKE Restaurants, which also owns the Carl’s Jr. chain.

70. Browning’s “How Do I Love Thee?” and others SONNETS

Elizabeth Barrett was a very popular poet in England in the mid-1800s. The successful poet and playwright Robert Browning was an admirer of her work, and wrote to her saying so. The two met, and began a famous courtship that led to a secret marriage that they had to hide from Elizabeth’s father.

Down
1. Common clown name BOBO
Bobo the Clown was the stage name of Chester Barnett who worked the circus circuit from the 1920s to the 1970s. Barnett gave himself the nickname “Bobo” when he was a child, using it for a persona that he adopted when he ran around the house wearing a paper bag on this head, with two holes cut to allow him to see.

3. Sheet rock? MICA
Mica is a mineral, a sheet silicate. Thin sheets of mica are transparent and are used in place of glass in certain applications. This form of mica is called isinglass, and as it has a better thermal performance than glass it is a great choice for “peepholes’ in boilers and lanterns. Mica is also used in the electronics industry, making use of its unique electrical and thermal insulating properties.

4. Rosary part BEAD
The Rosary is a set of prayer beads used in the Roman Catholic tradition. The name “Rosary” comes from the Latin “rosarium”, the word for a “rose garden” or a “garland of roses”. The term is used figuratively, in the sense of a “garden of prayers”.

5. Puff ___ ADDER
There are several species of venomous snakes that are referred to as puff adders. The so-called common puff adder is more correctly called the Bitis arietans. The most widespread snake in Africa, the common puff adder is responsible for more snakebite fatalities on the continent than any other snake.

9. Sudoku solver’s need LOGIC
Number puzzles similar to our modern-day Sudoku first appeared in French newspapers in the late 1800s. The format that we use today was created by Howard Garns, a 74-year-old freelance puzzle constructor from Connersville, Indiana and first published in 1979. The format was introduced in Japan in 1984 and given the title of “Sūji wa dokushin ni kagiru”, which translates to “the digits are limited to one occurrence”. The rather elaborate Japanese title was eventually shortened to Sudoku. No doubt many of you are fans of Sudoku puzzles. I know I am …

11. SpongeBob or Scooby-Doo TOON
SpongeBob SquarePants is a cartoon character in a Nickelodeon television series. Spongebob first appeared in 1999, and he “lives in a pineapple under the sea”. The character was created by marine biologist, cartoonist and animator Stephen Hillenburg.

13. Hershey toffee bar SKOR
Skor is a candy bar produced by Hershey’s. “Skor” is Swedish for “shoes”, and the candy bar’s wrapping features a crown that is identical to that found in the Swedish national emblem. Skor is sold in Canada as Rutnam.

23. Easy mark SAP
“Sap” is slang for a fool, someone easily scammed. The term arose in the early 1800s in Britain when it was used in “saphead” and “sapskull”. All these words derive from “sapwood”, which is the soft wood found in tree trunks between the bark and the heartwood at the center.

25. Title rat of a 1972 film BEN
“Ben” is a horror film released in 1972, about a young boy and his pet rat called Ben. “Ben” is a sequel to an equally horrific film called “Willard”, that was released the prior year and was also about a rat. The theme song to “Ben” was recorded by Michael Jackson and was a big hit for him.

26. Bruce Lee’s role in TV’s “The Green Hornet” KATO
In “The Green Hornet” television series, Kato was famously played by Bruce Lee. The Kato role has been cited as a driving force behind the increase in popularity of martial arts in the US during the sixties.

Bruce Lee was born not far from here in San Francisco although he was raised in Hong Kong, returning to the US to attend college. Sadly, Bruce Lee died when he was only 32 years old, due to cerebral edema (a swelling of the brain) attributed to adverse reactions to the pain killing drug Equagesic.

27. Longtime Sudanese president ___ al-Bashir OMAR
In response to a 2003 rebellion in the Darfur region of Sudan, the Sudanese government embarked on a campaign of ethnic cleansing against the non-Arab population in the region. Hundreds of thousands of civilian deaths ensued, and eventually Sudan’s president Omar al-Bashir was indicted for crimes against humanity by the International Criminal Court. al Bashir is still in office.

35. Part of QE2: Abbr. ELIZ
Cunard’s ocean liner the Queen Elizabeth 2 (QE2) was launched in 1967. The QE2 was taken out of service in 2008 and purchased by investment firm which is converting the vessel into a floating hotel that will be moored in Dubai.

38. Red-coated cheeses EDAMS
Edam cheese takes its name from the Dutch town of Edam in North Holland. The cheese is famous for its coating of red paraffin wax, a layer of protection that helps Edam travel well and prevents spoiling. You might occasionally come across an Edam cheese that is coated in black wax. The black color indicates that the underlying cheese has been aged for a minimum of 17 weeks.

41. D.D.E.’s charge in W.W. II ETO
General Dwight D. Eisenhower (DDE) was in command of the European Theater of Operations (ETO) during WWII.

47. New York’s ___ Glen State Park WATKINS
Watkins Glen State Park in New York State was opened in 1863 as a private tourist resort. The central attraction in the park is 400-foot gorge cut into rock by a stream known as Glen Creek. The resulting rapids and waterfalls are quite spectacular, I hear.

51. California’s ___ Sea SALTON
The Salton Sea is a lake lying directly on the San Andreas fault in Southern California. It is a rift lake, meaning that it formed as the result of ground subsiding along the fault line. The surface of the Salton Sea actually lies over 200 feet below sea level.

53. Big name in windows PELLA
Pella is a manufacturer of windows and door headquartered in Pella, Iowa, whence the company name.

57. Wavy-patterned fabric MOIRE
A moiré pattern is a phenomenon in physics, a so-called interference pattern. If you lay two sheets of mesh over each other for example, slightly offset, then what you see is a moiré pattern. “Moiré” is the French name for a textile that we know simply as “moire”. The rippled pattern of the textile resembles that of the interference pattern.

61. 3M product TAPE
The company that is now called 3M was founded as a mining venture in 1902, and used to be known as the Minnesota Mining and Manufacturing Company (hence the name “3M”).

63. Be a toady FAWN
The verb “to fawn” has a different etymology to the noun “fawn”. The Old English “faegnian” meant “to rejoice, be glad”. In particular, the Old English verb applied to a dog wagging its tail. From there “to fawn” came to mean “to court favor, to grovel”.

66. Workplace for some veterinarians ZOO
“Vet” is an abbreviation for “veterinarian”, a professional who treat animals for disease and injury. The word “veterinary” comes from the Latin “veterinae” meaning “working animals, beasts of burden”.