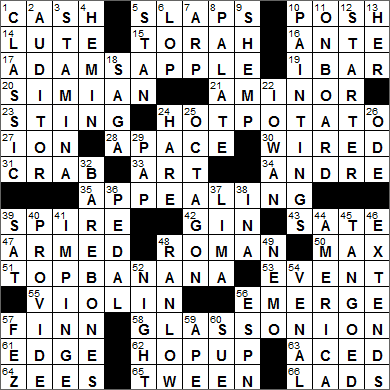 CROSSWORD SETTER: Gary Cee
THEME: Appealing … each of today’s themed answers ends with something that is peeled:

10. Sumptuously furnished : POSH
No one really knows the etymology of the word “posh”. The popular myth that POSH stands for “Port Out, Starboard Home” is completely untrue, and is a story that can actually be traced back to the 1968 movie “Chitty Chitty Bang Bang”. The myth is that wealthy British passengers travelling to and from India would book cabins on the port side for the outward journey and the starboard side for the home journey. This trick was supposedly designed to keep their cabins out of the direct sunlight.

14. Pear-shaped stringed instrument : LUTE
A lute player is a “lutenist”. A nice bit of trivia …

17. Bump on the neck : ADAM’S APPLE
The voice box or larynx is where pitch and volume of sound are manipulated when we talk. The structure called the Adam’s apple that protrudes from the human neck is formed by the thyroid cartilage that surrounds the larynx. The Adam’s apple of males tends to increase in size during puberty, so the feature tended to be associated more with males in days gone by, perhaps leading to the name “Adam’s” apple.

20. Like monkeys and 59-Downs : SIMIAN
“Simian” means “pertaining to monkeys or apes”, from the Latin word “simia” meaning “ape”.

23. What angry bees do : STING
A queen bee has a stinger, just like worker bees. When a worker bee stings, it leaves it stinger in its victim. The worker bee dies after losing its stinger as the loss rips out part of its insides. However, a queen bee can sting with impunity as the stinger’s anatomy is different.

34. Tennis champ Agassi : ANDRE
Renowned tennis professional Andre Agassi was nicknamed “the Punisher”, because of the efficiency with which he ran most of his opponents around the court. He wrote an autobiography called “Open”, published in 2009. An amazing revelation in the book is that Agassi’s famous head of hair was actually a wig for much of his playing career. Can you imagine how hard it must have been to play tennis at his level with a rug stuck on?

42. Sloe ___ fizz : GIN
By definition, a cocktail known as a Fizz includes lemon or lime juice and carbonated water. The most popular of the genre is the Gin Fizz, made from 3 parts gin, 2 parts lemon juice, 1 part sugar syrup and 5 parts soda water. There is also a variant known as a sloe gin fizz.

43. Completely gratify : SATE
“Sate” is a variant of the older word “satiate”. Both terms can mean either to satisfy an appetite fully, or to eat to excess.

51. Grand pooh-bah : TOP BANANA
The expression “top banana” is used to mean “the main guy” or “Mr. Big”. The first person to use “top banana” was supposedly Vaudeville performer Harry Steppe in 1927, who applied it to the top comic on the bill. The phrase comes from a comedy routine in which three comics struggle to share two bananas.

The term “pooh-bah” (also “poobah”), meaning an ostentatious official, comes from the world of opera. Pooh-Bah is a character in the wonderful Gilbert & Sullivan comic opera “The Mikado”. Famously, the Pooh-Bah in “The Mikado” holds many, many offices, including that of “Lord High Everything Else”.

53. 100-meter dash or shot put : EVENT
Shot put, or events like shot put, have been around for millennia, but the first events that truly resemble today’s track and field event had to come with the invention of the cannonball. Soldiers would “putt” (throw) cannonballs as far as possible in attempts to outperform each other. Shot put has been in the modern Olympic Games since day-one, with an American winning the gold in the first games in 1896, one Robert Garrett.

55. Itzhak Perlman’s instrument : VIOLIN
Itzhak Perlman is an Israeli-American violinist from Tel Aviv, and a virtuosi who I had the pleasure of hearing perform not too long ago. Little known fact: Perlman is a distant cousin of comedian Howie Mandel.

57. Huckleberry ___ : FINN
“The Adventures of Huckleberry Finn” by Mark Twain was first published in 1884, not here in the US but rather in England. The original launch planned for the US had to be delayed until 1885, because some rascal had defaced the plate for one of the illustrations, making an obscene joke. Once the problem was spotted a new plate had to be made, and 30,000 copies already printed had to be reworked to cover up the obscenity.

58. Hand-blown wine bottle that’s also the title of a 1968 Beatles song : GLASS ONION
“Glass Onion” is a 1968 Beatles song that is sort of self-referential in that there are mentions in the lyrics to earlier Beatles songs, including “Strawberry Fields Forever”, “I Am the Walrus”, “Lady Madonna” and “The Fool on the Hill”.

65. Many a middle schooler : TWEEN
The term “tween” is now used to describe preadolescence, the years between 8 and 12 years of age.

Down
5. ___ Lee of Marvel Comics : STAN
Stan Lee did just about everything at Marvel Comics over the years, from writing to being president and chairman of the board. If you like superhero movies based on the characters from Marvel Comics, then you could spend a few hours trying to spot Stan Lee in those films as he has a penchant for making cameo appearances. Lee can be spotted in “X-Men” (2000), “Spider-Man” (2002), “Hulk” (2003), “Fantastic Four” (2005), “Iron Man” (2008) and many other films.

7. Painter/poet Jean ___ : ARP
Jean Arp was a French artist renowned for his work with torn and pasted paper, although that wasn’t the only medium he used. Arp was the son of a French mother and German father and spoke both languages fluently. When he was speaking German he gave his name as Hans Arp, but when speaking French he called himself Jean Arp. Both “Hans” and “Jean” translate into English as “John”. In WWI Arp moved to Switzerland to avoid being called up to fight, taking advantage of Swiss neutrality. Eventually he was told to report to the German Consulate and fill out paperwork for the draft. In order to get out of fighting, Arp messed up the paperwork by writing the date in every blank space on the forms. Then he took off all of his clothes and walked with his papers over to the officials in charge. Arp was sent home …

9. Curly’s replacement in the Three Stooges : SHEMP
If you’ve seen a few of the films starring “The Three Stooges” you’ll have noticed that the line up changed over the years. The original trio was made up of Moe and Shemp Howard (two brothers) and Larry Fine (a good friend of the Howards). This line up was usually known as “Moe, Larry and Shemp”. Then Curly Howard replaced his brother when Shemp quit the act, creating the most famous trio, “Moe, Larry And Curly”. Shemp returned when Curly had a debilitating stroke in 1946, and Shemp stayed with the troupe until he died in 1955. Shemp was replaced by Joe Besser, and then “Curly-Joe” DeRita. When Larry Fine had a stroke in 1970, it effectively marked the end of the act.

10. “Sunflowers” and “Water Lilies” : PAINTINGS
“Sunflowers” is the name of two series of paintings by Vincent van Gogh. In the first series, the flowers are lying on the ground and in the second, more famous series painted in Arles, the flowers are in a vase. Famously, a Japanese insurance magnate purchased “Still Life: Vase with Fifteen Sunflowers” in 1987 in an auction, paying just under $40 million. This price outstripped the previous record price paid for a work of art by a wide, wide margin, one that stood at $12 million.

22. Early caucusgoer : IOWAN
The Iowa caucuses have been the first major electoral event in the nominating process for President since 1972.

24. Aesop character who lost a race : HARE
Aesop is remembered today for his famous fables. Aesop lived in Ancient Greece, probably around the sixth century BC. Supposedly he was born a slave, somehow became a free man, but then met with a sorry end. Aesop was sent to the city of Delphi on a diplomatic mission but instead insulted the Delphians. He was tried on a trumped-up charge of stealing from a temple, sentenced to death and was thrown off a cliff.

29. Easy-to-chew food : PAP
One meaning of “pap” is soft or semi-liquid food for babies and small children. “Pap” comes into English via French, from the Latin word used by children for “food”. In the 1500s, “pap” also came to mean “an oversimplified” idea. This gives us a usage that’s common today, describing literature or perhaps TV programming that lacks real value or substance. Hands up those who think there’s a lot of pap out there, especially on television …

37. Capital of Peru : LIMA
Lima is the capital city of Peru. Lima was founded in 1535 by the Spanish conquistador Francisco Pizarro, who named it “la Ciudad de los Reyes” (the City of Kings). He chose this name because the decision to found the city was made on January 6th, the feast of the Epiphany that commemorates the visit of the three kings to Jesus in Bethlehem.

44. “Sweet land of liberty,” in song : AMERICA
The patriotic song “America” is also known by its first line, “My Country, ‘Tis of Thee”. The song was written by Samuel Francis Smith in 1831, and was the de facto national anthem of the country until “The Star-Spangled Banner” was declared the official anthem in 1931. The melody of “My Country, ‘Tis of Thee” is identical with the British national anthem, “God Save the Queen”.

45. Did a stylized ballroom dance : TANGOED
The dramatic dance called the tango originated in the late 1800s in the area along the border between Argentina and Uruguay.

49. “Finding ___” (2003 Pixar film) : NEMO
“Finding Nemo” is a 2003 animated blockbuster from Pixar. The film was the winner of the Oscar that year for Best Animated Feature. Believe it or not, “Finding Nemo” is the best-selling DVD of all time and, until 2010’s “Toy Story 3”, it was the highest-grossing, G-rated movie at the box office.

54. Open to bribery : VENAL
Someone described as “venal” is open to bribery. The term ultimately derives from the Latin word “venus” meaning “for sale”.

56. Channel that describes itself as “The worldwide leader in sports” : ESPN
ESPN is the Entertainment Sports Programming Network, a cable network that broadcasts sports programming 24 hours a day. ESPN was launched back in 1979.

57. Hat with a tassel : FEZ
“Fez” is the name given to the red cylindrical hat worn mainly in North Africa, and by Shriners here in the US. The fez used to be a very popular hat across the Ottoman Empire. The etymology of “fez” is unclear, although it might have something to do with the Moroccan city named Fez.