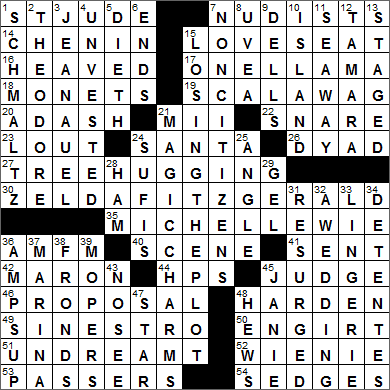 Today’s Wiki-est, Amazonian Googlies
Across
1. Patron for the desperate : ST JUDE
Saint Jude was one of the twelve apostles, who also went by the name Thaddeus. In the Roman Catholic tradition, Jude is the patron saint of lost causes and desperate cases.

14. ___ blanc (wine variety) : CHENIN
The Chenin blanc variety of white wine grape is native to the Loire valley of France, although today planted mainly in South Africa, where it also called Steen. The grape is named for Mont Chenin nears the French city of Tours.

17. A priest, not a beast : ONE-L LAMA
The poet Ogden Nash is well known for his light and humorous verse. Try this one for size:

18. “The Magpie” and “Grainstack” : MONETS
“The Magpie” is an oil painting by impressionist artist Claude Monet that can be seen in the Musée d’Orsay, Paris. It consists of a pastoral scene, with one solitary magpie perched on the top of a gate.

“Grainstack” is an oil painting by Claude Monet that can be seen in the Museum of Fine Arts in Boston.

19. Bounder : SCALAWAG
The American word “scalawag” meaning “rogue” was originally borrowed as a nickname for southern white people who supported reconstruction after the Civil War.

A “bounder” is a man deemed to be ill-bred and obtrusive. The term was originally slang in England, and probably came from the sense of someone acting outside the bounds of acceptable behavior.

20. Not much, in recipes : A DASH
In cooking, a “dash” is a very small measure, one that is often undefined. However, you can in fact buy some measuring spoons that define not only a dash but also a “pinch” and a “smidgen”, as follows:

22. Brushed instrument : SNARE
Snare drums are so called because they have a set of wire strands (called snares) stretched across the bottom surface of the drum. When the drum is struck, the snares vibrate against the bottom drumhead producing a unique sound.

23. Vulgarian : LOUT
A “vulgarian” is a person who is vulgar, but who is also wealthy and has good breeding.

26. Brace : DYAD
A brace is a pair, as in a brace of game birds that have been killed for sport.

35. 2014 U.S. Women’s Open winner : MICHELLE WIE
Michelle Wie is an American golfer on the LPGA Tour. Wie began playing golf at the age of four and was the youngest player ever to qualify for an LPGA tour event. She turned pro just before her 16th birthday …

42. Comedian Marc who recorded a memorable podcast with President Obama : MARON
Stand-up comedian Marc Maron has been hosting the podcast “WTF with Marc Maron” since 2009. The online show features interviews with comedians and celebrities. The list of interviewees is pretty impressive, and includes Conan O’Brien, Robin Williams and even President Barack Obama.

44. Some PCs : HPS
The giant multinational called HP (originally Hewlett-Packard) was founded in 1939 with an investment of $538, in a one-car garage in Palo Alto, California by Bill Hewlett and Dave Packard. The company name would have been Packard-Hewlett if Dave Packard had won a coin toss!

49. Green Lantern’s archenemy : SINESTRO
Thaal Sinestro is a supervillain in the DC Comics universe, an arch-enemy of the Green Lantern.

52. Twerp : WIENIE
“Twerp” and “pipsqueak” are both terms used for someone who is insignificant and contemptible.

54. Rush relatives : SEDGES
Sedges are a family of plants that resemble grasses and rushes. Sedges are more properly called Cyperaceae.

Down
1. Bathos : SCHMALTZ
“Schmaltz” is an informal term used to describe things that are excessively sentimental. The word comes from the Yiddish “shmalts”, which means “melted fat”. Indeed, the modern German word for fat or grease is Schmaltz, and it can be used in the same figurative way in that language.

“Bathos” is a descent from the sublime into the ridiculous. The term comes from the Greek “bathos” meaning “depth”.

2. Presidential first name : THEODORE
President Theodore Roosevelt was the first American to win a Nobel Prize in any field. He was awarded the Nobel Peace Prize in 1906 for his role in negotiating an end to the Russo-Japanese War.

3. “The Land of Painted Caves” author, 2011 : JEAN AUEL
As Jean Auel prepared her first book in the “Earth’s Children” series, she did a lot of research about the Ice Age, the setting for her stories. She went as far as taking a survival course in cold conditions, learning to build an ice cave and how to make fire, tan leather and knap stone.

4. Not yet available, as a stock : UNVESTED
An employer can contribute to an employee’s retirement plan, with “vesting” occurring over a period of time. This means that the employee has the right to an increasing portion of the employer’s contribution (usually company stock) over time. The portion that the employer can longer reclaim is referred to as the vested portion.

5. “And how ___ the wise man? as the fool”: Ecclesiastes 2:16 : DIETH
Ecclesiastes is a book in the Hebrew Bible and in the Old Testament. The term “ecclesiastes” is usually translated as “teacher” or “preacher”, although a more literal translation is “gatherer”.

8. Pigmented layer : UVEA
The uvea is the middle of the three layers that make up the eyeball. The iris is the colored part of the eye with an aperture in the center that can open or close depending on the level of light hitting the eye.

9. Some PCs : DELLS
Dell, the computer manufacturer, is named after the company’s founder Michael Dell. Michael Dell started his company in his dorm room at college, shipping personal computers that were customized to the specific needs of his customers. He dropped out of school in order to focus on his growing business, a decision that I doubt he regrets. Michael Dell is now one of the richest people in the world.

10. Christmas or Easter, for example : ISLAND
Christmas Island is an Australian territory located in the Indian Ocean. The island is so named because it was discovered by an English East India Company vessel on Christmas Day, in 1643.

Rapa Nui is the Polynesian name for what we are more likely to call Easter Island. The European name was coined by the Dutch explorer Jacob Roggeveen, who came across the island on Easter Sunday in the year 1722. Easter Island is inhabited, and is a location that is remarkably distant from neighboring civilization. The nearest inhabited island is Pitcairn Island, almost 1300 miles away.

12. Good name for a girl who procrastinates? : TAMARA
The female name “Tamara” sounds like “tomorrow”.

24. Eastern mystics : SUFIS
A Sufi is a Muslim mystic, an ascetic.

28. Croque-monsieur ingredient : HAM
The “croque monsieur” is a French dish, a baked or fried ham and cheese sandwich. Before baking, the sandwich is dipped in whipped eggs. The cheese used is traditionally Emmental or Gruyère. If the sandwich is topped with a fried egg, then it referred to as a croque madame.

33. Department store department : LINGERIE
“Lingerie” is a French term, but as used in France it just means any underwear, worn by either males or females. In English we use “lingerie” to describe alluring underclothing worn by women. The term “lingerie” comes into English via the French word “linge” meaning “washables”, and ultimately from the Latin “linum”, meaning “linen”. We tend not to pronounce the word correctly in English, either here in the US or across the other side of the Atlantic. The French pronunciation is more like “lan-zher-ee”, as opposed to “lon-zher-ay” (American) and “lon-zher-ee” (British).

34. Global warming periods? : DETENTES
“Détente” is a French word meaning “loosening, reduction in tension” and in general it is used to describe the easing of strained relations in a political situation. In particular, the policy of détente came to be associated with the improved relations between the US and the Soviet Union in the seventies.

45. Who’s “got a gun” in a 1989 Aerosmith hit : JANIE
Aerosmith is a hard rock band from Boston that formed in 1970. Aerosmith is the best-selling American rock band of all time, and holds the record for most gold albums by any American group.