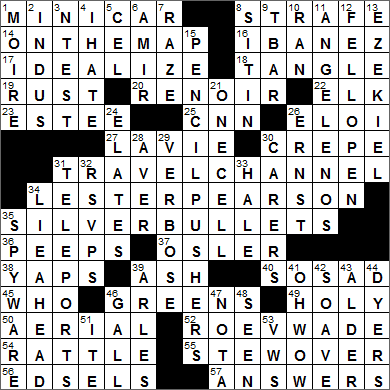 Today’s Wiki-est, Amazonian Googlies
Across
8. Subject to an air attack : STRAFE
We’ve been using “strafe” to mean an attack on a ground position from low-flying aircraft since WWII. Prior to that, the word was used by British soldiers to mean any form of attack. It was picked up from the German word for “punish” as it was used in “Gott strafe England” meaning, “May God punish England”.

16. Big name in guitars : IBANEZ
Ibanez is a brand of guitar from Japan. Ibanez guitars are named after the Spanish guitar maker Salvador Ibáñez, who plied his trade in the late 1800s and early 1900s.

20. “Girl With a Hoop” painter : RENOIR
Pierre-Auguste Renoir was a French painter, very much at the forefront of the Impressionist Movement. Renoir was a prolific artist, with several thousand works attributed to him. The largest collection of Renoirs is actually in the United States. You can see 181 of his paintings at the Barnes Foundation just outside Philadelphia.

22. Banff wildlife : ELK
Banff National Park in Alberta, Canada is located high in the Canadian Rockies and is a popular tourist destination. The town of Banff and the surrounding park were given their name in 1884 by then president of the Canadian Pacific Railway, George Stephen. He named Banff for his birthplace of Banffshire in Scotland.

23. First name in cosmetics : ESTEE
Estée Lauder was a very successful businesswoman, with a reputation as a great salesperson. Lauder introduced her own line of fragrances in 1953, a bath oil called “Youth Dew”. “Youth Dew” was marketed as a perfume, but it was added to bathwater. All of a sudden women were pouring whole bottles of Ms. Lauder’s “perfume” into their baths while using only a drop or two of French perfumes behind their ears. That’s quite a difference in sales volume …

25. Common waiting room viewing : CNN
CNN (Cable News Network) was launched in 1980 by the Turner Broadcasting System, and was the first television channel in the world to provide news coverage 24 hours a day.

26. Fictional race of the distant future : ELOI
In the 1895 novel by H. G. Wells called “The Time Machine”, there are two races that the hero encounter in his travels into the future. The Eloi are the “beautiful people” who live on the planet’s surface. The Morlocks are a race of cannibals living underground who use the Eloi as food.

27. Picasso masterpiece with a French title : LA VIE
Picasso’s 1903 oil painting “La Vie” is part of the permanent collection of the Cleveland Museum of Art.

A blintz (also “blin”, plural “blini”) is a thin pancake similar to a crêpe although unlike a crêpe, a blintz may contain yeast.

31. “Hotel Impossible” airer : TRAVEL CHANNEL
“Hotel Impossible” is a reality television show on the Travel Channel about struggling hotels. Each episode features a makeover of the hotel under the direction of hospitality expert Anthony Melchiorri, who was once the general manager of New York City’s Algonquin Hotel.

34. P.M. who won the 1957 Nobel Peace Prize : LESTER PEARSON
Lester B. Pearson was Prime Minister of Canada from 1963 to 1968. Prior to taking the nation’s highest office, Pearson won the Nobel Peace Prize for his leading role in resolving the 1956 Suez Crisis through the United Nations.

35. Miraculous solutions : SILVER BULLETS
We use the term “silver bullet” to describe a quick and effortless solution to a tricky problem. Famously, the Lone Ranger used bullets cast from silver in the cowboy series that ran on radio in the thirties, and later on television. According to 19th-century folklore, a silver bullet had magical power and was effective against werewolves, witches, vampires and the Devil.

52. Decision debated for decades : ROE V WADE
Roe v. Wade was decided in a US District Court in Texas in 1970, and reached the Supreme Court on appeal. The basic decision by the Supreme Court was that a woman’s constitutional right to privacy applied to an abortion, but that this right had to be balanced with a state’s interest in protecting an unborn child and a mother’s health. The Court further defined that the state’s interest became stronger with each trimester of a pregnancy. So, in the first trimester the woman’s right to privacy outweighed any state interest. In the second trimester the state’s interest in maternal health was deemed to be strong enough to allow state regulation of abortion for the sake of the mother. In the third trimester the viability of the fetus dictated that the state’s interest in the unborn child came into play, so states could regulate or prohibit abortions, except in cases where the mother’s life was in danger. I’m no lawyer, but that’s my understanding of the initial Supreme Court decision …

56. Corsairs and Rangers of the 1950s : EDSELS
The Edsel brand of automobile was named for Edsel Ford, son of Henry Ford. Sadly, the name “Edsel” has become synonymous with “failure”, which was no fault of Edsel himself who had died several years before the Edsel line was introduced.

Down
1. Op art pattern : MOIRE
A moiré pattern is a phenomenon in physics, a so-called interference pattern. If you lay two sheets of mesh over each other for example, slightly offset, then what you see is a moiré pattern. “Moiré” is the French name for a textile that we know simply as “moire”. The rippled pattern of the textile resembles that of the interference pattern.

2. It flows for nearly 2,000 miles in Asia : INDUS
The Indus river rises in Tibet and flows through the length of Pakistan and empties into the Arabian Sea, the part of the Indian Ocean lying to the west of the Indian subcontinent. The Indus gives its name to the country of India as “India” used to be the name of the region (which paradoxically is now in modern-day Pakistan) along the eastern banks of the river.

5. Frame from a drawer : CEL
In the world of animation, a cel is a transparent sheet on which objects and characters are drawn. In the first half of the 20th century the sheet was actually made of celluloid, giving the “cel” its name.

9. It’s a lift : T-BAR
A T-bar is a type of ski lift on which the skiers are pulled up the hill in pairs, with each pair standing (not sitting!) either side of T-shaped metal bar. The bar is placed behind the thighs, pulling along the skiers as they remain standing on their skis (hopefully!). There’s also a J-bar, a similar device, but with each J-shaped bar used by one skier at a time.

11. Kings’ supporters : ANGELENOS
An Angeleno is someone who lives in Los Angeles.

13. Book before Daniel : EZEKIEL
The Book of Ezekiel (Ezek.) in the Old Testament (OT) is a collection of the preachings of the prophet Ezekiel.

21. Amoeba feature : ONE CELL
An ameba (or “amoeba”, as we spell it back in Ireland) is a single-celled microorganism. The name comes from the Greek “amoibe”, meaning change. The name is quite apt, as the cell changes shape readily as the ameba moves, eats and reproduces.

26. Lubitsch of old Hollywood : ERNST
Ernst Lubitsch was a German-American movie director. He arrived in Hollywood in 1922 from Germany, hired as a director by actress and producer Mary Pickford. The list of Lubitsch’s films includes “Lady Windermere’s Fan” (1925), “The Shop Around the Corner” (1940) and “Heaven Can Wait” (1943).

32. Says one can make it, say : RSVPS
RSVP stands for “répondez s’il vous plaît”, which is French for “please, answer”.

33. Well : HALE
“Hale” is an adjective meaning “healthy”. Both the words “hale” and “healthy” derive from the the Old English “hal” meaning healthy.

35. Means of obtaining private information : SPYWARE
Spyware is software that is installed on a computer to gather information without the owner’s knowledge. Nasty stuff …

39. Name in many van Gogh titles : ARLES
Quite a few years ago now, I had the privilege of living just a short car-ride from the beautiful city of Arles in the South of France. Although Arles has a long and colorful history, the Romans had a prevailing influence over the city’s design. Arles has a spectacular Roman amphitheater, arch, circus as well as old walls that surround the center of the city. In more modern times, it was a place Vincent van Gogh often visited, and where he painted his famous “Cafe Terrace at Night”, as well as “Bedroom in Arles”.

42. Italian wine : SOAVE
Soave is a dry white wine produced in the area around the city of Verona in northeast Italy.

51. Ending with Manhattan : -ITE
The island we know as Manhattan was inhabited by the Lenape Indians when the first Europeans explorers arrived in the area. According to the logbook of one of the officers on explorer Henry Hudson’s yacht, the island was called “Manna-hata” in the local language, from which the modern name derives.

53. Bugs on the road : VWS
VW stands for Volkswagen, which translates from German into “people’s car”. The original Volkswagen design was the Beetle and was built under a directive from Adolf Hitler, who wanted a cheap car built that ordinary people could afford to purchase. He awarded the contract to engineer Ferdinand Porsche, whose name (paradoxically) would forever be associated with high performance, expensive cars. The Beetle was the official name of the VW model released in North America, but it was usually referred to as a “Bug” here in the US, and a “Beetle” elsewhere in the world.