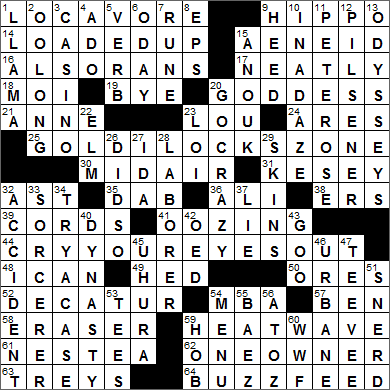 Today’s Wiki-est, Amazonian Googlies
Across
1. One inclined to patronize a farmer’s market : LOCAVORE
A “locavore” is someone who limits his or her diet to food that is produced locally, often within 100 miles of its point of purchase. There’s a great memoir by the author Barbara Kingsolver that discusses the experiences of her and her family with the locavore lifestyle called “Animal, Vegetable, Miracle: A Year of Food Life” An excellent read …

9. Cetacean’s closest relative : HIPPO
Cetaceans are mammals who have adapted to life in water. Examples of cetaceans are whales, dolphins and porpoises. The cetaceans’ nearest relative still living on land is the hippopotamus, with divergence having taken place about sixty million years ago.

15. Old epic recounting wanderings : AENEID
“The Aeneid” is Virgil’s epic poem that tells of the journey of Aeneas, a Trojan who traveled to Italy to become the ancestor of all Romans. “The Aeneid” begins with the words “Arma virumque cano …”, which translates as “I sing of arms and of a man …”

19. It leads to early advancement : BYE
The word “bye”, as used in sport, originated in cricket. A bye is a run scored due to an error by the wicketkeeper (similar to a catcher in baseball) when he fails to stop a ball bowled by the bowler (like a pitcher in baseball). Later the word “bye” in sport came to mean the position of a player in a tournament who is left without a competitor when the rest have drawn pairs. In these commercial times, those byes tend to be awarded to the best (seeded) players, so that the most popular players always advance past the first round of competition.

21. Longtime Princess Royal : ANNE
Anne, Princess Royal was born in 1950 and is the only daughter of British Queen Elizabeth II. Princess Anne has been in the public spotlight for many things, including her success as an equestrian. Princess Anne was the first member of the British Royal Family to have competed in an Olympic Games. Her daughter Zara Phillips continued the tradition and competed as a member of the British equestrian team in the 2012 Olympic Games. Zara’s medal was presented to her by her own mother, Princess Anne.

“Princess Royal” is the title given to the eldest daughter of a British monarch.

25. Region around a star “just right” for habitable planets : GOLDILOCKS ZONE
The potentially habitable zone around a star is known as the “circumstellar habitable zone” (CHZ). It is the region where planets exist with an atmospheric pressure sufficient enough there to be liquid water on the surface. The CHZ is also known as the Goldilocks zone, from the fairy tale. Goldilocks chose the porridge, chair and bed that was “just right”, and the CHZ is “just right” for supporting life … maybe.

32. Puerto Rico is on it year-round, for short : AST
Atlantic Standard Time (AST) is four hours behind Greenwich Mean Time and one hour ahead of Eastern Standard Time. The list of locations that use AST includes Puerto Rico and the Canadian provinces of New Brunswick and Nova Scotia.

36. Subject of a museum in Louisville, Ky. : ALI
“The Muhammad Ali Center” is a museum in Ali’s hometown of Louisville, Kentucky. The center was opened in 2005 and explores the life of the champion boxer and features exhibitions that reflect Ali’s core values.

Chino is a twill cloth most often used to make hard-wearing pants. The pants have come to be referred to as chinos. Chino cloth was originally developed for use by the military, but quickly became popular with civilians.

49. “I knew a man Bojangles and ___ dance for you …” (1968 song lyric) : HE’D
“Mr. Bojangles” is a 1968 song written and recorded by country music singer Jerry Jeff Walker. Walker tells us that the song is not a reference to the stage and film star Bill “Bojangles” Robinson.

52. Naval hero with five U.S. counties named for him : DECATUR
Stephen Decatur was a naval officer from Maryland who served with distinction in the US Navy in a career that included the 1812. In 1804, Decatur became the youngest captain in the history of the Navy. His career, and life, came to an untimely end when he was killed in a duel with a fellow officer in the navy.

57. Big ___ : BEN
Big Ben is the name commonly used for the large bell in the Clock Tower of the Palace of Westminster (aka the Houses of Parliament). Big Ben’s official name is the Great Bell, and there is some debate about the origins of the nickname. It may be named after Sir Benjamin Hall who oversaw the bell’s installation, or perhaps the English heavyweight champion of the day Benjamin Caunt.

61. Beverage brand with three leaves in its logo : NESTEA
Nestea is a brand of iced tea made by Nestlé. “Nestea” is a portmanteau of “Nestlé” and “tea”.

63. Long hoops shots : TREYS
A trey of clubs, for example, is a name for the three of clubs in a deck of cards. The name “trey” can also be used for a domino with three pips, and even a three-point play in basketball.

64. Presenter of many listicles : BUZZFEED
BuzzFeed is an Internet media company that was founded in 2006 in New York City.

Down
1. A baby one is called a cria : LLAMA
Cria is the name given to baby llamas, and similar creatures such as alpacas. “Cria” is a Spanish word for baby.

3. House of cards? : CASINO
The “casino” originated in the 1700s, first describing a public room for music or dancing. The name “casino” is a diminutive of “casa” meaning “house”.

6. Jazz singer whose surname came from pig Latin : O’DAY
Anita O’Day was the stage name of the jazz singer Anita Colton. She chose the name as “O’Day” is pig Latin for “dough”, a slang term for “money”. O’Day had problems with heroin and alcohol addiction leading to erratic behavior, and earning her the nickname “The Jezebel of Jazz”.

7. Tolkien character : RUNE
A rune is a character in an alphabet that is believed to have mysterious powers. In Norse mythology, the runic alphabet was said to have a divine origin.

J. R. R. (John Ronald Reuel) Tolkien was an English author, best known by far for his fantasy novels “The Hobbit” and “The Lord of the Rings”. Although Tolkien lived in England and was a professor at Oxford, he served for many years as an external examiner at my old school, University College Dublin in Ireland.

8. They’re longer than singles, briefly : EPS
An extended play record (EP) contains more music than a single, but less than an LP.

11. Appropriately named Reds legend : PETE ROSE
Pete Rose was a talented baseball player who holds the record for all-time Major League hits. In recent years of course his reputation has been tarnished by admissions that he bet on games in which he played and managed.

12. Brew named for a Czech city : PILSENER
Pilsener (also pilsner or pils) is a pale lager. The name “pilsener” comes from the city of Pilsen, now in the Czech Republic. It was in Pilsen, in 1842, that the first bottom-fermented lager was produced. A bottom-fermented beer is much clearer that a top-fermented beer, and has a crisper taste. The “top” and “bottom” refers to where the yeast gathers during the brewing process.

13. Long, trying trips : ODYSSEYS
“The Odyssey” is one of two epic poems from ancient Greece that is attributed to Homer. “The Odyssey” is largely a sequel to Homer’s other epic, “The Iliad”. “The Odyssey” centers on the heroic figure Odysseus, and his adventures on his journey home to Greece following the fall of Troy. We now use the term “odyssey” to describe any long series of adventures.

15. Aimée of film : ANOUK
Anouk Aimée is a French film actress. Aimée’s most famous film outside of France is probably the internationally successful 1966 French hit “A Man and a Woman”, in which she played the female lead.

23. Rule, in Rennes : LOI
Rennes is the capital city of the Brittany region of France, and is also the administrative capital of the department known as Ille-et-Vilaine.

27. Mount with the Cave of Zeus : IDA
Accounting to mythology, Zeus was born in a cave at Mount Ida, the highest peak on the island of Crete.

28. September honoree : LABORER
Labor Day is a federal holiday observed every year on the first Monday in September. The tradition of honoring workers with a holiday started in Boston in 1878, when a day of observance was organized by the Central Labor Union, the major trade union at the time. There was a bloody dispute in 1894 between labor unions and the railroads called the Pullman Strike, which led to the death of some workers when the US Military and US Marshals were instructed to maintain order. President Grover Cleveland submitted a “Labor Day” bill to Congress which was signed into law just six days after the end of the strike. The introduction of a federal holiday to honor the worker was a move designed to promote reconciliation between management and unions after the bitter conflict.

32. The discovery of penicillin, e.g. : ACCIDENT
The antibiotic called penicillin was discovered by Alexander Fleming in 1928. He noted that a blue-green mold growing in a Petri dish produced a substance that inhibited the growth of Staphylococcus bacteria, which was growing on the same substrate. The mold was Penicillium notatum, and Fleming named the antibiotic penicillin after the mold.

40. Bourbons, e.g. : DYNASTY
The House of Bourbon is a royal house in Europe that ruled France right up until the French Revolution. Famous French kings such as Louis XIV and Louis XVI all belonged to the House of Bourbon.

42. Time magazine’s “scholarly Everest,” for short : OED
The “Oxford English Dictionary” (OED) contains over 300,000 “main” entries and 59 million words in total. It is said it would take a single person 120 years to type it out in full. The longest entry for one word in the second edition of the OED is the verb “set”. When the third edition was published in 2007, the longest entry for a single word became the verb “put”. Perhaps not surprisingly, the most-quoted author in the OED is William Shakespeare, with his most quoted work being “Hamlet”. The most-quoted female author is George Eliot (aka Mary Ann Evans).

45. 2009 and ’13 sci-fi role for Zoë Saldana : UHURA
American actress Zoe Saldana played the Na’vi princess in “Avatar”, and Uhura in the 2009 movie “Star Trek”. Saldana seems to pick the right movies, as she is the only actress to have three different films in the top twenty at the box office for three consecutive weeks (“Avatar”, “The Losers” and “Death at a Funeral”).

46. Refined : URBANE
We use “urbane” today to mean something courteous or refined. Back in the 1500s the term was used in the same way that we now use “urban”. Those townsfolk thought they were more sophisticated than the countryfolk, and so the usage evolved.