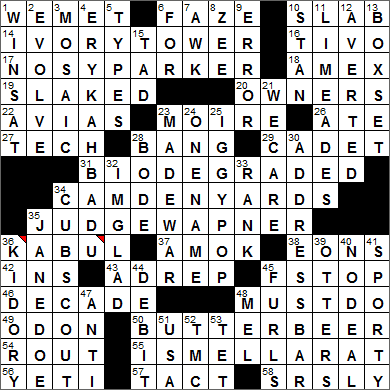 Today’s Wiki-est, Amazonian Googlies
Across
14. Neocon’s target of derision : IVORY TOWER
In modern usage, an ivory tower is an environment focused on education and intellectual pursuits while isolated from the practicalities of everyday life. The term is often used to describe academia. “Ivory tower” originated in the Song of Solomon in the Bible with the the line “Your neck is like an ivory tower”.

By definition, a neoconservative (neocon) is a former left-aligned politician who has moved to the right and supports the use of American power and military to bring democracy, liberty, equality and human rights to other countries.

16. Prepare for a later showing, maybe : TIVO
TiVo was introduced in 1999 and was the world’s first commercially successful DVR (Digital Video Recorder).

18. Major name in cards : AMEX
Amex is short for American Express. In dollar terms, there are more transactions conducted in the US using the Amex card than any other card.

19. Satisfied : SLAKED
“To slake” is to satisfy a craving, as in slaking one’s thirst.

22. Pumas alternative : AVIAS
The Avia brand name for athletic shoes was chosen as “avia” is the Latin word for “to fly”, and suggests the concept of aviation. Avia was founded in Oregon in 1979.

23. Wavy fabric pattern : MOIRE
A moiré pattern is a phenomenon in physics, a so-called interference pattern. If you lay two sheets of mesh over each other for example, slightly offset, then what you see is a moiré pattern. “Moiré” is the French name for a textile that we know simply as “moire”. The rippled pattern of the textile resembles that of the interference pattern.

27. Part of STEM, for short : TECH
The acronym STEM stands for the disciplines of science, technology, engineering and mathematics. An alternative acronym with a similar meaning is MINT, standing for mathematics, information sciences, natural sciences and technology.

35. Arbiter of 1980s TV : JUDGE WAPNER
Joseph Wapner is a retired judge who was the first person to star in the reality show “The People’s Court”. With Wapner on the bench, the first manifestation of “The People’s Court” ran for almost 2,500 episodes, from 1981 to 1993. Prior to gracing our TV screens, Judge Wapner served for 18 years on the Los Angeles County Superior Court.

37. Hectically : AMOK
The phrase “to run amok” (sometimes “to run amuck”) has been around since the 1670s and is derived from the Malay word for “attacking furiously”, “amuk”. The word “amok” was also used as a noun to describe Malay natives who were “frenzied”. Given Malaya’s troubled history, the natives probably had good reason for that frenzy …

38. Mountains have grown over them : EONS
Geological time is divided into a number of units of varying lengths. These are, starting from the largest:

45. Setting for Ansel Adams : F-STOP
Varying the f-stop in a lens varies how big the lens opening (the aperture) is when a photograph is taken. Smaller apertures (higher f-stop values) admit less light, but result in a greater depth of field (more of the photograph is in focus).

46. Tony Blair’s period as British P.M., e.g. : DECADE
Tony Blair was Prime Minister of the United Kingdom for ten years, from 1997 to 2007. Blair led his Labour Party from the left, more to the center, helped along by the phrase “New Labour”. Under his leadership, Labour won a landslide victory in 1997, and was comfortable elected into power again in 2001 and 2005. Blair stepped down in 2007 and Gordon Blair took over as prime minister. Labour was soundly defeated at the polls in the next general election, in 2010.

56. Legend of climbing expeditions : YETI
A yeti is a beast of legend, also called an abominable snowman. “Yeti” is a Tibetan term, and the beast is fabled to live in the Himalayan regions of Nepal and Tibet. Our equivalent legend in North America is that of Bigfoot, also known as Sasquatch. The study of animals whose existence have not yet been substantiated is called cryptozoology.

57. “The ability to describe others as they see themselves,” per Lincoln : TACT
Abraham Lincoln was the 16th President of the US, elected in 1860 as the first president from the Republican Party. Lincoln’s electoral support came almost exclusively from the north and west of the country, winning only two out of 996 counties in the Southern slave states. Lincoln led the country through Civil War, and then was assassinated in 1865 just a few days after Robert E. Lee surrendered his army of Northern Virginia. President Lincoln was succeeded in office by Vice President Andrew Johnson.

Down
3. “Navicella” at St. Peter’s, for one : MOSAIC
The “Navicella” was a large mosaic on a wall in the Old Saint Peter’s Basilica in Rome. With the title translating as “Little Ship”, the Navicella depicted Jesus walking on the water, as described in the Bible’s Gospel of Matthew. The mosaic was virtually destroyed during the construction of the new Saint Peter’s Basilica in the early 1600s, although fragments have been incorporated into a new work that is on display in the new building.

4. “Love of My Life (An Ode to Hip Hop)” Grammy winner : ERYKAH BADU
Erykah Badu is the stage name of Erica Wright, an American “neo-soul” singer. Badu gained some notoriety in March of 2010 when she shot a scene for a music video in Dallas. In the scene, she walks to the spot where President Kennedy was assassinated, removing her clothes until she is nude, and then falls to the ground as if she has been shot in the head. For that stunt she was charged with disorderly conduct.

5. B and O, e.g. : TYPES
The most important grouping of blood types is the ABO system. Blood is classified as either A, B, AB or O, depending on the type of antigens on the surface of the red blood cells. A secondary designation of blood is the Rh factor, in which other antigens are labelled as either positive or negative. When a patient receives a blood transfusion, ideally the donor blood should be the same type as that of the recipient, as incompatible blood cells can be rejected. However, blood type O-neg can be accepted by recipients with all blood types, A, B, AB or O, and positive or negative. Hence someone with O-neg blood type is called a “universal donor”.

7. Aviary cry : AWK!
An aviary is a large cage that houses birds. “Avis” is Latin for bird.

15. Modicum : TAD
Back in the 1800s “tad” was used to describe a young child, and this morphed into our usage of “small amount” in the early 1900s. The original use of “tad” for a child is very likely a shortened version of “tadpole”.

21. Clichéd company slogan : WE CARE
“Cliché” is a word that comes from the world of printing. In the days when type was added as individual letters into a printing plate, for efficiency some oft-used phrases and words were created as one single slug of metal. The word “cliché” was used for such a grouping of letters. It’s easy to see how the same word would become a term to describe any overused phrase. Supposedly, “cliché” comes from French, from the verb “clicher” meaning “to click”. The idea is that when a matrix of letters was dropped in molten metal to make a cliché, it made a clicking sound.

24. Something Rihanna and Madonna each have : ONE NAME
The singer Rihanna was born and grew up on the island of Barbados and moved to the US when she was 16-years-old to pursue a singing career. “Rihanna” is her stage name, as she was born Robyn Rihanna Fenty. The name “Rihanna” is derived from the Welsh name “Rhiannon”.

25. “I Wanna Be Your Dog” vocalist : IGGY POP
Iggy Pop is a punk rock performer from Muskegon, Michigan. When he was in high school, he was a drummer for a local band called the Iguanas, and so was given the nickname “Iggy”.

35. Woman of mystery? : JANE DOE
Although the English court system does not use the term today, “John Doe” first appeared as the “name of a person unknown” in England in 1659, along with another unknown, Richard Roe. The female equivalent of John Doe is Jane Doe, with the equivalent to Richard Roe being Jane Roe (as in Roe v. Wade, for example).

39. Some pups : OTTERS
The fur of the sea otter is exceptionally thick. It is in fact the densest fur in the whole animal kingdom.

51. “Royal Pains” network : USA
“Royal Pains” is a medical drama that has aired on the USA network since 2009. The storyline revolves around a “concierge doctor” named Hank Lawson, a doctor who provides medical support to residents of a resort community in the Hamptons.

52. Showtime affiliate : TMC
The Movie Channel is owned by Showtime, which in turn is subsidiary of CBS. The channel’s name is often abbreviated to “TMC”, although this is informal usage.

53. Occasion for gifting red envelopes : TET
The full name for the New Year holiday in Vietnam is “Tet Nguyen Dan” meaning “Feast of the First Morning”, with the reference being to the arrival of the season of spring. Tet usually falls on the same day as Chinese New Year. One of the traditions observed at Tet is the gifting of money in red envelopes from elders to children.