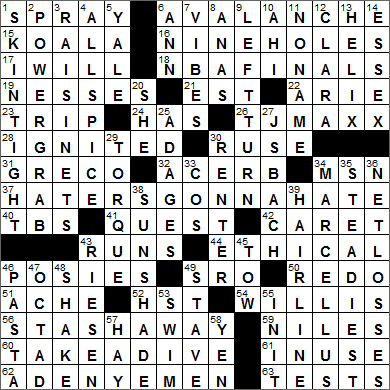 Today’s Wiki-est, Amazonian Googlies
Across
15. One with a pouch : KOALA
The koala bear really does look like a little bear, but it’s not even closely related. The koala is an arboreal marsupial and a herbivore, native to the east and south coasts of Australia. Koalas aren’t primates, and are one of the few mammals other than primates who have fingerprints. In fact, it can be very difficult to tell human fingerprints from koala fingerprints, even under an electron microscope. Male koalas are called “bucks”, females are “does”, and young koalas are “joeys”. I’m a little jealous of the koala, as it sleeps up to 20 hours a day …

19. Promontories : NESSES
A “ness” is a headland or promontory. The term comes from Old Norse and has the same roots as the word “nose”.

21. What most adjectives end in? : -EST
Adjectives indicating the “most” are superlative adjectives, and usually have the suffix “-est”.

26. Competitor of Kohl’s : TJ MAXX
T.J. Maxx is a chain of department stores in the US, with outlets in Europe as well. Over in the UK however, the stores are known as T.K. Maxx.

34. It launched Hotmail in ’96 : MSN
My research shows that Hotmail was indeed introduced in 1996, but Microsoft didn’t acquire the service until the following year. Soon after the acquisition in 1997, Microsoft made Hotmail part of its MSN group of services.

41. Indiana Jones was on one : QUEST
In the “Indiana Jones” series of films, Dr. “Indy” Jones is played so ably by Harrison Ford. Dr. Marcus Brody is also played ably by the veteran English actor Denholm Elliott.

42. Input signal? : CARET
The character known as a caret was originally a proofreading mark, used to indicate where a punctuation mark was to be inserted. “Caret” is Latin for “it lacks”.

46. Florists’ creations : POSIES
The word “posy”, meaning a bouquet of flowers, comes from the word “poesy”, which was a line of verse engraved on the inner surface of a ring. The jump to “posy” came with the notion that the giving of flowers was a form of language in itself. A posy can also be called a nosegay or a tussie-mussie.

52. Korean War leader, for short : HST
The initial “S” in the middle of the name Harry S. Truman (HST) doesn’t stand for anything. The future-president was named “Harry” in honor of his mother’s brother Harrison “Harry” Young. The initial “S” was chosen in honor of young Harry’s two grandfathers: Anderson S-hipp Truman and S-olomon Young.

Korea was occupied by the Japanese military from 1910 until Japan surrendered at the end of WWII in 1945. While the UN was working towards a trusteeship administration for Korea, the Soviet Union managed the Korean Peninsula north of the 38th parallel and the US managed the south. The UN’s plans came to nothing as the Cold War dictated the establishment of the two separate states of North Korea and South Korea. North Korea invaded the South in 1950, leading to the Korean War. After three years of fighting, the border between the two states became the demarcation line between the two military forces on the day the Armistice Agreement was signed. That line runs diagonally across the 38th parallel, and is better known as the Korean Demilitarized Zone (DMZ).

54. 1987 Emmy winner for “Moonlighting” : WILLIS
Actor Bruce Willis started to hit the big time when he got a lead role in the comedy detective series “Moonlighting” in the late eighties. Willis was born in Germany, where his father was stationed while serving in the US Army. Willis’ mother was German.

59. One of TV’s Crane brothers : NILES
In the sitcom called “Frasier”, Niles Crane is the brother of the title character Frasier Crane. Fraiser is played by Kelsey Grammer and Niles is played by David Hyde Pierce. Frasier was originally intended to be an only child in the show’s storyline, but the producers decided to add a brother when they noted the remarkable similarity in appearance between David Hyde Pierce and Kelsey Grammer.

62. Where the U.S.S. Cole was attacked in 2000 : ADEN, YEMEN
The USS Cole is a guided missile destroyer with a homeport in Norfolk, Virginia. The Cole fell victim to a suicide attack in 2000 by Al-Qaeda bombers who detonated an explosion on a boat close to the navy vessel while it was at anchor in Aden. 17 of the Cole’s crew members were killed in the attack, which blew a hole in the port side of the ship.

Down
3. Alternative to Goobers : RAISINETS
Raisinets are chocolate-covered raisins produced by Nestlé. They are often sold in boxes in movie theaters.

4. Jamaican jerk chicken seasoning : ALLSPICE
The spice known as “allspice” was given its name in the early seventeenth century as it flavor was said to resemble a combination of cinnamon, nutmeg and cloves. In fact, allspice is made from dried berries of the Pimenta dioica tree.

6. ___ Dunham, Barack Obama’s mother : ANN
Barack Obama, Sr. was first married at the age of 18 in his home country of Kenya, and had two children during that marriage. He left his wife and children back in Kenya when he enrolled in the University of Hawaii in 1959 as the school’s first African foreign student. There Obama met Ann Dunham in a Russian language course. The two entered into a romantic relationship and Dunham became pregnant. Obama told Dunham that he was divorced from his first wife (not true), and the pair were married on Maui in 1961. Six months later, Barack Obama II was born, destined to become the 44th President of the United States. The couple divorced in 1964. After the divorce, Dunham was able to marry Lalo Soetoro, a Javanese surveyor who she met while he was studying for a masters degree at the university. Soetoro returned to Indonesia in 1966, and Dunham joined him there the following year with her 6-year-old son. Barack Obama spent four years in Indonesia before returning to Hawaii to live with his grandparents.

8. Santa ___ (weather phenomena) : ANAS
The Santa Ana winds are the very dry air currents that sweep offshore late in the year in Southern California. Because these air currents are so dry, they are noted for their influence over forest fires in the area, especially in the heat of the fall. The winds arise from a buildup of air pressure in the Great Basin that lies between the Rocky Mountains and the Sierra Nevada. Under the right conditions, that air spills over the peaks of the Sierra Nevada and basically “falls” down the side of the Sierra range, heading for the ocean. As the air falls it becomes drier and heats up so that relative humidity can fall to below 10% by the time it hits the coast.

10. Bigeye, on some menus : AHI
Yellowfin and bigeye tuna are usually marketed as “ahi”, the Hawaiian name. They are both big fish, with yellowfish tuna often weighing over 300 pounds, and bigeye tuna getting up to 400 pounds.

12. Santa ___ : CLARA
The Santa Clara Valley, just a few miles from me at the south of San Francisco Bay, is better known as “Silicon Valley”. The term “Silicon Valley” dates back to 1971 when it was apparently first used in a weekly trade newspaper called “Electronic News” in articles written by journalist Don Hoefler.

25. Many clichés : ADAGES
“Cliché” is a word that comes from the world of printing. In the days when type was added as individual letters into a printing plate, for efficiency some oft-used phrases and words were created as one single slug of metal. The word “cliché” was used for such a grouping of letters. It’s easy to see how the same word would become a term to describe any overused phrase. Supposedly, “cliché” comes from French, from the verb “clicher” meaning “to click”. The idea is that when a matrix of letters was dropped in molten metal to make a cliché, it made a clicking sound.

27. Mass master, in brief : JS BACH
Perhaps the most famous mass in classical music is J. S. Bach’s “Mass in B minor”, fittingly completed just before he died. It was one of the last of Bach’s compositions, although much of the music was composed earlier in his life.

29. Force on a nut : TORQUE
Torque can be thought of as a turning force, say the force needed to tighten a bolt or a nut.

Marcus Claudius Marcellus was a Roman consul and military leader who is famous for capturing the Sicilian city of Syracuse after a protracted siege. One person who died in the siege was the Greek mathematician, inventor and astronomer Archimedes.

43. German chocolate brand : RIESEN
Riesen is a chocolate that is produced and sold in Germany, and is also sold here in the US. Riesen introduced a recipe for a hot chocolate drink in 2007. The recipe calls for melting the chocolate candy over heat in a saucepan, then adding one cup of milk per candy piece. Sprinkle nutmeg to taste.

49. Wooden pail part : STAVE
A wooden barrel or pail is constructed using vertical staves made of wood that are bound together by wooden hoops.

58. Some foreign reserves : YEN
The yen replaced the ryo as the unit of currency in Japan in 1871.