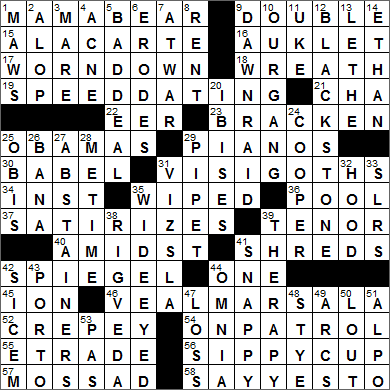 Today’s Wiki-est, Amazonian Googlies
Across
1. One of a trio in a children’s story : MAMA BEAR
The story of “Goldilocks and the Three Bears” was first recorded in 1837, in England, although the narrative was around before it was actually written down. The original fairy tale was rather gruesome, but successive versions became more family-oriented. The character that eventually became Goldilocks was originally an elderly woman, and the three “nameless” bears became Papa Bear, Mama Bear and Baby Bear.

15. Lacking any sides : A LA CARTE
On a restaurant menu, items that are “à la carte” are priced and ordered separately. A menu marked “table d’hôte” (also called “prix fixe”) is a fixed-price menu with limited choice.

16. Puffin relative : AUKLET
Auklet is the name given to several small auks found on around the coasts of the North Pacific.

18. Prize at the top of a maypole : WREATH
A maypole is a tall pole used in various folk festivals in Europe, usually taking place in early to mid-summer. The pole is often used for a maypole dance in which men and women circle while holding ribbons attached to the top of the pole.

21. Start of many a dance routine : CHA-
The cha-cha-cha (often simplified to “cha-cha”) is a Latin dance with origins in Cuba, where it was introduced by composer Enrique Jorrin in 1953.

23. Large fern : BRACKEN
The fern known as bracken is one of the oldest ferns in the world. Fossil records have been found of bracken that lived over 55 million years ago.

29. Things bench players need? : PIANOS
What was remarkable about the piano when it was invented, compared to other keyboard instruments, was that notes could be played with varying degrees of loudness. This is accomplished by pressing the keys lightly or firmly. Because of this quality, the new instrument was called a “pianoforte”, with “piano” and “forte” meaning “soft” and “loud” in Italian. We tend to shorten the name these days to just “piano”.

30. Pandemonium : BABEL
We use the word “babel” now to describe a scene of confusion, lifting the term from the biblical story of the Tower of Babel. The Tower was built in the city of Babylon, and the construction was cursed with a confusion of languages due to the varied origins of all the builders.

31. Sackers in the sack of Rome, A.D. 410 : VISIGOTHS
The East Germanic tribe called the Goths has two main branches, called the Ostrogoths and the Visigoths. The Visigothic capital was the city of Toulouse in France, whereas the Ostrogoth capital was the Italian city of Ravenna just inland of the Adriatic coast. It was the Visigoths who sacked Rome in 410 CE, heralding the fall of the Western Roman Empire.

37. Treats as in “South Park” or “Doonesbury” : SATIRIZES
“South Park” is an adult-oriented cartoon series on Comedy Central. I don’t do “South Park” …

When cartoonist Garry Trudeau was deciding on a name for his comic strip in 1970, he opted for “Doonesbury”. He combined “doone”, which is slang for a “genial fool”, and the last syllables in “Pillsbury”, the family name of Trudeau’s roommate while he was at Yale.

42. Clothing company whose mail-order catalog debuted in 1905 : SPIEGEL
Spiegel is a company that sells women’s clothing and accessories, and which has a famous catalog sales business. The company was founded way back in 1865 by Joseph Spiegel as a home furnishings retail outlet in Chicago.

46. Trattoria entree : VEAL MARSALA
A trattoria is an Italian restaurant. In Italian, a “trattore” is the keeper of an eating house.

52. Saggy and crinkled : CREPEY
Something described as “crepey” has a wrinkled surface, looks like crepe paper.

55. Fidelity competitor : E*TRADE
E*Trade is mainly an online discount brokerage. It was founded in 1982 in Palo Alto, California, and I used to drive by its headquarters almost every day. The company is now run out of New York City. E*Trade produces those famous Super Bowl ads with the talking babies staring into a webcam.

57. Spy group : MOSSAD
The national intelligence agency of Israel is known as Mossad, which is short for HaMossad leModiʿin uleTafkidim Meyuḥadim (Hebrew for “Institute for Intelligence and Special Operations”).

2. Like some rabbit ears : ALOP
I had to go to one of my two huge volumes of the OED to find the definition of “alop”. It means “lop-sided”. A lovely word …

3. Certain dam : MARE
There are lots of terms to describe horses of different ages and sexes, it seems:

A dam is a female parent, especially of four-footed domestic animals such as horses.

10. Shorts popular in the 1920s and ’30s : OUR GANG
Hal Roach made a whole series of comedy shorts with “The Little Rascals”, also known as “Our Gang”. This very likable bunch of kids included Spanky and his kid brother, Porky. Porky had a speech impediment so he couldn’t pronounce “Okay, Spanky” very clearly and it came out as “Otay, Panky”.

11. It might be picked for a song : UKE
The ukulele (“uke”) originated in the 1800s and mimicked a small guitar brought to the Hawaiian Islands by Portuguese immigrants.

12. “The Great” magician whose signature trick was the “floating light bulb” : BLACKSTONE
The Great Blackstone was the stage name of magician and illusionist Harry Blackstone. Blackstone was a big name during WWII and appeared in many USO shows.

13. River of myth where one drinks to forget : LETHE
The Lethe is one of the five rivers of Hades in Greek mythology. All the souls who drank from the river Lethe experienced complete forgetfulness. The Greek word “lethe” means “oblivion, forgetfulness”.

20. Birds in hieroglyphics : IBISES
The ibis is a wading bird that was revered in ancient Egypt. “Ibis” is an interesting word grammatically speaking. You can have one “ibis” or two “ibises”, and then again one has a flock of “ibis”. And if you want to go with the classical plural, instead of two “ibises” you would have two “ibides”!

24. Cask maker : COOPER
A cooper is a craftsman who makes wooden vessels, such as barrels.

25. Eastern ties : OBIS
The sash worn as part of traditional Japanese dress is known as an obi. The obi can be tied in what is called a butterfly knot.

26. Eric of “Hulk” : BANA
Eric Bana is an Australian actor who enjoyed a successful career in his home country before breaking into Hollywood playing an American Delta Force sergeant in “Black Hawk Down”. A couple of years later he played the lead in Ang Lee’s 2003 movie “The Hulk”, the role of Dr Bruce Banner. More recently he played the Romulan villain Nero, in the 2009 “Star Trek” movie.

29. Lab vessel : PIPET
A pipette (also “pipet”) is tool used in a lab to transport an accurately measured volume of liquid. Back in my day, we would suck up the liquid into the pipette by applying our mouths to the top of the instrument. This could be quite dangerous, as one ended up with a mouthful of something unsavory if one lifted the top of pipette out of the liquid too soon. Nowadays, things are much safer.

31. Hungarian hunting dog : VIZSLA
The Vizsla is a breed of sporting dog that originated in Hungary. The first Vizsla dogs, a mother and two of her pups, arrived in the US from Rome in 1950.

33. Some photog purchases : SLRS
SLR stands for “single lens reflex”. Usually cameras with changeable lenses are the SLR type. The main feature of an SLR is that a mirror reflects the image seen through the lens out through the viewfinder, so that the photographer sees exactly what the lens sees. The mirror moves out of the way as the picture is taken, and the image that comes through the lens falls onto unexposed film, or nowadays onto a digital sensor.

38. Ancient collection of Sanskrit hymns : RIG VEDA
The Rig Veda is a collection sacred hymns that is one of the four canonical texts of Hinduism known as the Vedas.

43. ___-Novo (capital on the Gulf of Guinea) : PORTO
Porto-Novo is the capital city of Benin in West Africa. Porto-Novo may be the capital of the country but it isn’t the biggest city, and it isn’t even the most economically important. That honor goes to the city of Cotonou.

51. Brand with a Gravy Cravers line : ALPO
Alpo is a brand of dog food first produced by Allen Products in 1936, with “Alpo” being an abbreviation for “Allen Products”. Lorne Greene used to push Alpo in television spots, as did Ed McMahon and Garfield the Cat, would you believe?