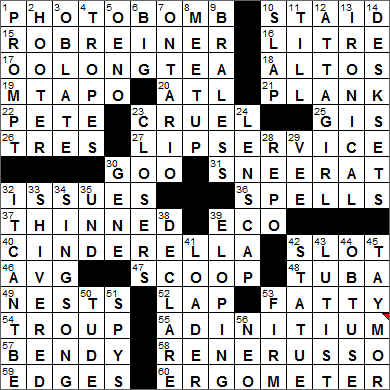 Today’s Wiki-est, Amazonian Googlies
Across
1. Drop-in shot? : PHOTOBOMB
Photobombing is the act of intruding during the taking of a photograph as a practical joke. The term has gotten a lot of usage in recent years due to the proliferation of smartphone cameras. Collins English Dictionary named “photobomb” as Word of the Year for 2014.

10. Button-down : STAID
Something described figuratively as “button-down” is very conventional and unimaginative. The idea is that someone opting for a shirt with a button-down collar might be described as conventional.

15. Emmy-winning sitcom actor of 1974 and ’78 : ROB REINER
The great director and actor Rob Reiner first came to prominence playing “Meathead”, Archie and Edith Bunker’s son-in-law in “All in the Family” (for which he won Emmy Awards in 1974 and 1978). Since then, Reiner has directed a long string of hit movies including, “The Princess Bride”, “Stand by Me”, “This Is Spinal Tap”, “When Harry Met Sally”, “Misery” and “A Few Good Men”.

16. Reading volume : LITRE
On the other side of the Atlantic we use the French spelling for measurements that originated in French, so “metre” for “meter” and “litre” for “liter”.

Reading is the county town of Berkshire in England. It is a major railroad junction, and the site of a renowned monastery and a prison. Reading Prison was where American actor Stacy Keach spent 6 months in 1984, convicted of smuggling cocaine into the UK.

18. Some voices : ALTOS
In choral music, an alto (plural “alti”) is the second-highest voice in a four-part chorus made up of soprano, contr(alto), tenor and bass. The word “alto” describes the vocal range, that of the deepest female singing-voice, whereas the term “contralto” describes more than just the alto range, but also its quality and timbre. An adult male’s voice (not a boy’s) with the same range as an alto is called a “countertenor”.

20. Locale of the Falkland Isls. : ATL
The Falkland Islands are in the South Atlantic Ocean, about 300 miles off the coast of Argentina. The Falklands have been claimed as an overseas territory by various European nations, with the British having the most persistent claim from the northern hemisphere. Understandably perhaps, nearby Argentina has claimed ownership of the islands for centuries. The dispute between Britain and Argentina came to a head in 1982 when Argentine forces invaded the Falklands. It took weeks for a British expeditionary force to arrive in the area, but they emerged victorious after some explosive air and naval battles that resulted in the death of 255 British and 649 Argentine military personnel.

22. Sessions of Congress : PETE
Pete Sessions is a Republican member of the US House of Representatives from Texas. Pete is the son of former FBI director William S. Sessions.

25. Force in W.W. I and II : GIS
The initials “G.I.” stand for “Government Issue” and not “General Infantry” as is often believed. GI was first used in the military to denote equipment made from Galvanized Iron and during WWI, incoming German shells were nicknamed “GI cans”. Soon after, the term GI came to be associated with “Government Issue” and eventually became an adjective to describe anything associated with the Army.

36. Breaks one’s word? : SPELLS
One spells out a word by breaking it into individual letters.

40. Kind of team : CINDERELLA
In the world of sports, a “Cinderella Story” is a situation in which a competitor or team is far more successful than is reasonably expected. The term is a reference to the “Cinderella” fairy tale.

48. It has a solo near the end of “An American in Paris” : TUBA
The 1951 film “An American in Paris” was inspired by the delightful symphonic tone poem of the same name written by George Gershwin in 1928. Gershwin also wrote the music for the film, with lyrics by his brother Ira. The musical is chock full of famous tunes including “I got Rhythm” and “‘S Wonderful”. At the end of the movie there is a very unique dance sequence featuring the stars, Gene Kelly and Leslie Caron. The dance lasts a full 16 minutes, choreographed to Gershwin’s original “An American in Paris” composition.

49. Swallows things? : NESTS
Swallows are remarkable birds at least in one aspect. Swallows, and the related martins, have evolved so that they can feed while flying, snapping up insects in mid-air.

54. Bobby who wrote “Route 66” : TROUP
Bobby Troup was an actor, pianist and songwriter. As a composer, he is best known for writing the R&B song “(Get Your Kicks on) Route 66”. As an actor, he is best known for playing neurosurgeon Dr. Joe Early in the 1970 TV show “Emergency!” Troup appeared in “Emergency!” with his wife Julie London, who played head nurse Dixie McCall.

58. She played Natasha in 2000’s “The Adventures of Rocky and Bullwinkle” : RENE RUSSO
The lovely and very talented actress Rene Russo is a native of Burbank, California. Russo went to highschool (with actor/director Ron Howard), but dropped out in tenth grade. At seventeen, she was given the opportunity to train as a model and within a very short time appeared on the cover of “Vogue”. As her modelling jobs slowed down in her early thirties, Russo made a career change and studied theater and acting. I am so glad she did, as Rene Russo is one of my favorite actresses …

“The Adventures of Rocky and Bullwinkle” is a live-action/animated movie released in 2000 inspired by “The Rocky and Bullwinkle Show” TV show from the late fifties and early sixties. Rocky and Bullwinkle are in cartoon form in the film, whereas other characters are played by actors. The lead roles are Fearless Leader (Robert De Niro), Boris Badenov (Jason Alexander) and Natasha Fatale (Rene Russo).

60. Stress test apparatus : ERGOMETER
An “ergometer” is an exercise machine that measures the amount of work performed by the person exercising.

Down
2. Schnoz : HOOTER
“Schnoz” is a slang term for a nose, particularly a large one.

3. Shaped like Saturn : OBLATE
Something that is described as having an “oblate” shape is spherical, slightly depressed at top and bottom, just like the Earth for example. A more extreme example of an oblate shape is an M&M.

Saturn is readily visible from Earth with the unaided eye, but we need some help to see the planet’s famous rings. Galileo was the first person to see Saturn’s rings, when he turned his primitive telescope towards the night sky in 1610. However, he misinterpreted what he was observing and assumed that the rings were in fact two smaller planets located at either side of the larger Saturn.

4. Recurrent themes : TROPES
A “trope” is a figure of speech, from the Greek word “tropos” that has the same meaning.

5. Vintner’s prefix : OENO-
In Greek mythology, Oeno was the goddess of wine, giving us “oen-” as a prefix meaning “wine”. For example, oenology is the study of wine and an oenophile is a wine-lover.

7. It’s superior to Superior : ONTARIO
The province of Ontario lies to the north of (is superior to) Lake Superior.

8. Rendezvous : MEETUP
A rendezvous is a meeting, from the French “rendez vous” meaning “present yourselves”.

10. Come-on comeuppance : SLAP
To receive one’s “comeuppance” is to get one’s just deserts, an unpleasant consequence for one’s actions. The term likely comes from the concept of being told to “come up” to a higher authority for judgment.

11. One holding notes : TILL
What we usually call a cash register here in North America, we mostly call a “till” in Ireland and the UK. I haven’t heard the word “till” used much here.

29. Flight pattern : VEE
Apparently geese fly in a V-formation for a couple of reasons. One is that it makes for efficient flight and conserves energy. The leading bird gets no advantage, but every following bird gets to “slipstream” a little. It has been noted that the lead bird drops to the back of the formation when he/she gets fatigued. It’s also thought that the flock can stick together more easily when in formation, so it is more difficult to lose someone along the way.

30. Something passed down the line : GENE
A gene is a section of a chromosome that is responsible for a particular characteristic in an organism. For example, one gene may determine eye color and another balding pattern. We have two copies of each gene, one from each of our parents, with each copy known as an allele.

The Hanseatic League was a confederation of merchant guilds and market towns that stretched along the Northern European coast from the 13th to the 17th centuries. Also known as the Hansa, the league is remembered today in company names like “Lufthansa”, the airline (translating as “Air Hansa”).

41. FedEx employee, at times : LOADER
FedEx began operations in 1973 as Federal Express, but now operates very successfully under it’s more catchy abbreviated name. Headquartered in Memphis with its “SuperHub” at Memphis International Airport, FedEx is the world’s largest airline in terms of tons of freight flown. And due to the presence of FedEx, Memphis Airport has the largest-volume cargo operation of any airport worldwide.

45. Julie with two Tonys for “The Lion King” : TAYMOR
Julie Taymor is a director of movies, and of opera and theater productions. Taymor’s best known work is the stage musical “The Lion King”. She also directed William Shakespeare’s “Titus Andronicus” on the stage, and brought the play to the big screen as the 1999 feature film “Titus”.

51. 1974 film with three stars in its title : S*P*Y*S
“S*P*Y*S” is a 1974 comedy starring Elliott Gould and Donald Sutherland as two men mistaken as spies and targeted by the KGB. With all those asterisks in the film’s title, one has to assume the movie was intended to capitalize on the success of the 1970 Gould/Sutherland vehicle called “M*A*S*H”.

56. Sci-fi character who takes the red pill rather than the blue one : NEO
Neo is the character played by Keanu Reeves in “The Matrix” series of films. One of Neo’s actions is to to choose a red pill over a blue pill. The blue pill would have allowed him to remain in the Matrix, a fabricated reality. The red pill led to his escape into the real world, and a much more difficult life.