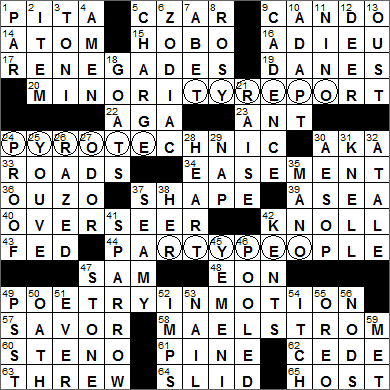 CROSSWORD SETTER: Kathy Wienberg
THEME: Poetry in Motion … each of today’s themed answers contains the letters POETRY all in a row, but scrambled. We have POETRY IN MOTION:

49A. Sublime physical performance … or a hint to this puzzle’s circled letters : POETRY IN MOTION

20A. 2002 Tom Cruise sci-fi film : MINORITY REPORT
24A. Related to fireworks : PYROTECHNIC
44A. They know how to have a good time : PARTY PEOPLE

Today’s Wiki-est, Amazonian Googlies
Across
1. Bread with a pocket : PITA
Pita is a lovely bread in Middle-Eastern and Mediterranean cuisines. Pita is usually round, and has a “pocket” in the center. The pocket is created by steam that puffs up the dough during cooking leaving a void when the bread cools.

5. Ivan the Terrible, for one : CZAR
The Grand Prince of Moscow Ivan IV became known as Ivan the Terrible. The name “terrible” is a translation from Russian, and perhaps creates the wrong impression about the man. The Russian word is “Grozny”, which is more akin to “strict” and “powerful” rather than “cruel” or “abominable”.

15. Down-on-his-luck wanderer : HOBO
No one seems to know for sure how the term “hobo” originated, although there are lots of colorful theories. My favorite is that “hobo” comes from the first letters in the words “ho-meward bo-und”, but it doesn’t seem very plausible. A kind blog reader tells me that according to Click and Clack from PBS’s “Car Talk” (a great source!), “hobo” comes from “hoe boy”. Hoe boys were young men with hoes looking for work after the Civil War. Hobos differed from “tramps” and “bums”, in that “bums” refused to work, “tramps” worked when they had to, while “hobos” traveled in search of work.

19. Copenhageners, e.g. : DANES
Copenhagen is the largest city and the capital of Denmark. I have never visited Copenhagen, but I hear it is a wonderful metropolis with a marvelous quality of life. The city is also very environmentally friendly, with over a third of its population commuting to work by bicycle.

20. 2002 Tom Cruise sci-fi film : MINORITY REPORT
“Minority Report” is an entertaining 2002 Steven Spielberg film that is loosely based on a short story of the same name by Philip K. Dick. It’s a sci-fi movie set in 2054 and starring Tom Cruise as a Chief of PreCrime, someone who hunts down criminals based on foreknowledge provided by psychics.

22. ___ Khan : AGA
Aga Khan is a hereditary title of the Imam of a large sect within the Shi’a Muslim faith. The current Aga Khan is Shah Karim al-Hussayni, who has held the position since 1957.

23. “___-Man,” 2015 superhero movie : ANT
In the Marvel universe, the original Ant-Man was a scientist who used a drug to change his size, becoming small in scale while increasing his strength. Ant-Man featured in a 2015 superhero film, with Paul Rudd in the title role.

33. All of them lead to Rome, in a saying : ROADS
The expression “all roads lead to Rome” is used to mean “whatever way we do this, we’ll get the same result”. The phrase has been used since the 1100s and probably even earlier than that. The expression arises because the ancient Roman road system had all major roads radiating from Rome like spokes on a wheel.

34. Right of way, at law : EASEMENT
In the world of law, an “easement” is the right given to an individual to make limited use of someone else’s real property. Usually this is a right of way, allowing someone to cross the property.

36. Greek liqueur : OUZO
Ouzo is an aperitif from Greece that is colorless and flavored with anise. Ouzo is similar to pastis from France and also has a flavor like sambuca from Italy.

47. Smith who sang the theme for “Spectre” : SAM
Sam Smith is a singer from London. I think that the only thing I’ve heard of his is the theme song from the 2015 James Bond movie “Spectre”, which is called “Writing’s on the Wall”.

58. Violent vortex : MAELSTROM
A maelstrom is a violent or turbulent situation, or a very large whirlpool. “Maelstrom” is derived from the name of a notorious whirlpool located off the northwest coast of Norway.

60. Note taker : STENO
Stenography is the process of writing in shorthand. The term comes from the Greek “steno” (narrow) and “graphe” (writing).

65. Rio de Janeiro, for the 2016 Olympics : HOST
Even though the 2016 Olympic Games is a “summer” competition, it will be held in Rio de Janeiro in the winter. As Rio is in the southern hemisphere, the planned date of the opening of 5th August 2016 falls in the local season of winter. The 2016 games will also be first to be held in South America, and the first to be hosted by a Portuguese-speaking country.

Down
2. Agenda listing : ITEM
“Agenda” is a Latin word that translates as “things to be done”, coming from the verb “agere” meaning “to do”.

3. Tennille of pop music’s Captain & Tennille : TONI
The seventies singing duo known as Captain & Tennille was made up of husband and wife Daryl Dragon and Toni Tennille. Early in 2014, Tennille filed for divorce from Dragon after 39 years of marriage. Sad to see that …

4. “So be it!” : AMEN!
The word “amen” is translated as “so be it”. “Amen” is said to be of Hebrew origin, but it is likely to be also influenced by Aramaic and Arabic.

6. It starts with Aries : ZODIAC
Aries the Ram is the first astrological sign in the Zodiac, and is named after the constellation. Your birth sign is Aries if you were born between March 21 and April 20, but if you are an Aries you would know that! “Aries” is the Latin word for “ram”.

7. Assist with a heist, say : ABET
The word “abet” comes into English from the Old French “abeter” meaning “to bait” or “to harass with dogs” (it literally means “to make bite”). This sense of encouraging something bad to happen morphed into our modern usage of “abet” meaning to aid or encourage someone in a crime.

11. El ___ (weather phenomenon) : NINO
When the surface temperature of much of the Pacific Ocean rises more that half a degree centigrade, then there is said to be an El Niño episode. That small temperature change in the Pacific has been associated with climatic changes that can stretch right across the globe. El Niño is Spanish for “the boy” and is a reference to the Christ child. The phenomenon was given this particular Spanish name because the warming is usually noticed near South America and around Christmas-time.

12. Bambi, for one : DEER
The 1942 Disney classic “Bambi” is based on a book written by Felix Salten called “Bambi, A Life in the Woods”. There is a documented phenomenon known as the Bambi Effect, whereby people become more interested in animal rights after having watched the scene where Bambi’s mother is shot by hunters.

25. “___ got mail” : YOU’VE
The iconic phrase “You’ve got mail” was first used by AOL in 1989. The greeting was recorded by voice actor Elwood Edwards. Edwards has parlayed his gig with AOL into some other work. He appears in an episode of “The Simpsons” as a doctor who says the line “You’ve got leprosy”. Edwards also worked as a weatherman for a while and got to use the line “You’ve got hail” …

28. Valentine symbol : HEART
Saint Valentine’s Day was chosen by Pope Gelasius I in 496 AD to honor various martyrs with the name Valentine. However, the saint’s’ day was dropped by the Roman Catholic church in 1969, by Pope Paul VI. Try telling that to Hallmark though …

30. Creator of “The Tortoise and the Hare” : AESOP
Aesop is remembered today for his famous fables. Aesop lived in Ancient Greece, probably around the sixth century BC. Supposedly he was born a slave, somehow became a free man, but then met with a sorry end. Aesop was sent to the city of Delphi on a diplomatic mission but instead insulted the Delphians. He was tried on a trumped-up charge of stealing from a temple, sentenced to death and was thrown off a cliff.

31. Mournful ring : KNELL
The word “knell” is used for a solemn ring from a bell, often associated with death or a funeral. “Knell” comes the Old English “cnell” and is probably imitative in origin, sounding like a peal from a large bell.

32. Dickens’s “___ of Two Cities” : A TALE
“A Tale of Two Cities” by Charles Dickens is the most printed book that was originally written in English. The two cities in the title are London and Paris.

37. Sordid : SEAMY
We’ve used “seamy” to mean “the least pleasant, the worst” since the 1600s. The idea comes from the seamed side of a sewn garment being the less attractive.

41. Fictional pirate who shares his name with a bird : SPARROW
Captain Jack Sparrow is the protagonist in the “Pirates of the Caribbean” series of movies. Sparrow is of course played by Johnny Depp. Depp has said that he based his portrayal of Sparrow partly on the Rolling Stones guitarist Keith Richards. I could believe that …

42. Smallville family : KENTS
Superman was sent to Earth in a rocket as a child by his parents who were living on the doomed planet of Krypton. On Earth he was discovered by the Jonathan and Martha Kent, farmers who lived near the fictional town of Smallville. The Kents raised the infant as their own, giving him the name Clark.

45. Saudi neighbor : YEMENI
Yemen is located on the Arabian Peninsula, lying just south of Saudi Arabia and west of Oman. Yemen is the only state on the peninsula that is a republic (its official name is the Republic of Yemen). Everyone over the age of 18 gets to vote, but only Muslims can hold elected office. Yemen has seen many rebellions over the centuries, and has been suffering through a Shia uprising since February 2015.

51. Second-to-last word in a fairy tale : EVER
… and they all lived happily ever after.

54. Yen : ITCH
The word “yen”, meaning “urge”, has been around in English since the very early 1900s. It comes from the earlier word “yin” imported from Chinese, which was used in English to describe an intense craving for opium!

55. Brand touted as “Milk’s favorite cookie” : OREO
National Oreo Cookie Day is March 6th each year. There is an urban legend that the particular day was chosen as this was the day that the name “Oreo” was registered as a trademark. However, that’s not the case. The application was filed on March 14, 1912 and registration took place on August 12, 1913. So, who knows why it’s March 6th?

59. New York baseballer : MET
The New York Mets baseball team was founded in 1962, a replacement for two teams that the city had lost, namely the Brooklyn Dodgers and the New York Giants. For several years the Mets played very poorly, finishing no better than second-to-last in their division. Then of course along came the “Miracle Mets” who beat the Baltimore Orioles in 1969 to claim the World Series in a huge upset.