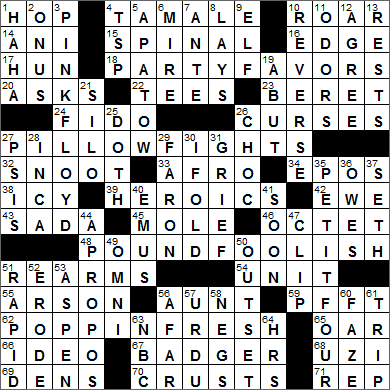 Today’s Wiki-est, Amazonian Googlies
Across
4. Burrito alternative : TAMALE
A tamale is a traditional dish from Central America composed of a starchy dough that is steamed or boiled in a wrapper made of leaves. The dough is called masa, and can include many different ingredients including meat, cheese fruit and vegetables.

A burrito is a common dish served in Mexican cuisine, It is a flour tortilla filled with all sorts of good stuff. The term “burrito” is Spanish for “little donkey”, the diminutive of “burro” meaning “donkey”. It’s thought that the name was applied as a burrito looks like a bedroll or pack that might be carried by a donkey.

17. Attila or one of his followers : HUN
The Huns were a nomadic people who originated in Eastern Europe in the 4th century. Under the command of Attila the Hun they developed a unified empire that stretched from modern-day Germany across to the steppes of Central Asia. The whole of the Hunnic Empire collapsed within a year of Attila’s death in 453 AD.

22. Caddie’s bagful : TEES
“Caddie” is a Scottish word, as one might expect given the history of the game of golf. “Caddie” is a local word derived from the French “cadet”, meaning a younger son or brother, and also a student officer in the military.

32. Hoity-toity sort : SNOOT
“Snoot” is a variant of “snout” and is a word that originated in Scotland. The idea is that someone who is “snooty”, or snouty, tends to look down his or her nose at the rest of the world.

33. Jimi Hendrix hairdo : AFRO
Many of his contemporaries regarded Jimi Hendrix as the greatest electric guitarist in the history of rock music. Hendrix was from Seattle and didn’t really have a really stellar start to his working life. He failed to finish high school and fell foul of the law by getting caught in stolen cars, twice. The courts gave him the option of the army or two years in prison. Hendrix chose the former and soon found himself in the famous 101st Airborne. In the army, his less-than-disciplined ways helped him (as he would have seen it) because his superiors successfully petitioned to get him discharged after serving only one year of his two-year requirement, just to get him out of their hair.

34. Poems featuring 39-Across : EPOS
“Epos” is the Greek word for a story or a poem. We have absorbed it into English as “epic”, a long narrative poetic work describing heroic deeds and ventures.

43. Actress Thompson of TV’s “Family” : SADA
Sada Thompson was an actress from Des Moines, Iowa. Thompson is best known for playing the mother and wife in the eighties television drama series called “Family”.

48. Not good with large sums of money, in a saying : POUND-FOOLISH
That would be “penny-wise and pound-foolish”.

56. ___ Jemima : AUNT
The Aunt Jemima brand name was taken from an old vaudeville song called “Old Aunt Jemima”. The whole Aunt Jemima image has been surrounded by controversy for many years, understandably.

67. Harass, as a witness in court : BADGER
“To badger” is to harass. The term comes from the cruel practice of “badger-baiting”, which dates back to medieval times. Badger-baiting is a blood sport in which a dog is used as “bait” for a badger in its den, to draw him out into the open. The den is an artificial structure built to resemble a natural badgers’ den, complete with a tunnel entrance. The dog is sent down the tunnel causing the badger and dog to lock their jaws on each other. The badger and dog are then removed from the den by pulling on the dog’s tale. I am ashamed to say that badger-baiting is still practiced (illegally) in Ireland, with ten convictions in the courts over the past 20 years.

68. Gun in an action film : UZI
The first Uzi submachine gun was designed in the late 1940s by Major Uziel “Uzi” Gal of the Israel Defense Forces, who gave his name to the gun.

Down
3. “The Wall” rock band : PINK FLOYD
Pink Floyd were an English rock band founded in 1965. The band’s most famous albums are probably “The Dark Side of the Moon” and “The Wall”.

5. Judd who wrote and directed “Knocked Up” : APATOW
Judd Apatow is known for producing the TV series “Freaks and Geeks” and “Undeclared”. Those shows aren’t my cup of tea, but he also collaborated with Lena Dunham to create the show “Girls”. I could drink that tea all day long …

8. Brand of chips : LAY’S
Lay’s potato chips were introduced in 1938 by Herman W. Lay. Lay started selling his chips out the trunk of his car, travelling all over the US. In those days the chips were pretty much handmade, but Lay put an end to that in 1942. He invented the first continuous potato processor in 1948, and chips started to take over the world!

13. Observes the Sabbath : RESTS
The Sabbath is a day of rest and religious observance in several religions. The Sabbath is Saturday in the Jewish faith and in some Christian traditions. It is Sunday for most Christians, and Friday in the Muslim faith.

21. Farm storage building : SILO
“Silo” is a Spanish word that we absorbed into English, originally coming from the Greek word “siros” that described a pit in which one kept corn.

27. Letters between chis and omegas : PSIS
The Greek letter psi is the one that looks a bit like a trident or a pitchfork. It is the 23rd letter of the 24 letters in the Greek alphabet.

28. Ancient alpaca herder : INCA
The Inca people emerged as a tribe around the 12th century, in what today is southern Peru. The Incas developed a vast empire over the next 300 years, extending along most of the western side of South America. The Empire of course fell to the Spanish, finally dissolving in 1572 with the execution of Tupac Amaru, the last Incan Emperor.

29. ___ Young, singer with the #1 country hit “Live Fast, Love Hard, Die Young” : FARON
Faron Young was a country singer who was nicknamed the Hillbilly Heartthrob. Young started performing in the fifties and continued until the mid-nineties. Some believe that a waning career and failing health led to his suicide in 1996 at the age of 64 years.

30. “Uncle,” in poker : I FOLD
To “say uncle” is an American expression meaning to submit or yield. Its usage dates back to the early 1900s, but nobody seems to know how “uncle!” came to mean “stop!”

35. Small frosted cake : PETIT FOUR
A “petit four” is a small confection served at the end of a meal, either as a dessert or with coffee. The name “petit four” is French for “small oven”.

37. MacFarlane of “Family Guy” : SETH
Seth MacFarlane is best known for creating the very successful (although they don’t get my vote!) animated TV shows “Family Guy” and “American Dad”. My kids love ’em …

40. Cousins of ostriches : EMUS
The emu has had a tough time in Australia since man settled there. There was even an “Emu War” in Western Australia in 1932 when migrating emus competed with livestock for water and food. Soldiers were sent in and used machine guns in an unsuccessful attempt to drive off the “invading force”. The emus were clever, breaking their usual formations and adopting guerrilla tactics, operating as smaller units. After 50 days of “war”, the military withdrew. Subsequent requests for military help for the farmers were ignored. The emus had emerged victorious …

44. Fittingly : APROPOS
“Apropos” comes into English directly from French, in which “à propos” means “to the purpose”. Note that we use the term as one word (apropos), but the original French is two words (à propos).

53. Colorado ski town : ASPEN
Aspen, Colorado used to be known as Ute City, with the name change taking place in 1880. Like many communities in the area, Aspen was a mining town, and in 1891 and 1892 it was at the center of the highest production of silver in the US. Nowadays of course, it’s all about skiing and movie stars.