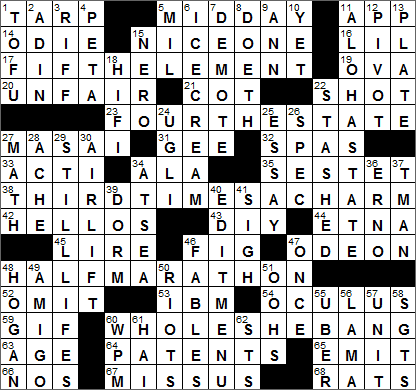 CROSSWORD SETTER: Parker Lewis
THEME: Fractions … at the starts of today’s themed answers, we have sequence of fractions that get progressively larger as we descend through the grid, ending with a WHOLE unit:

17A. 1997 Bruce Willis sci-fi film, with “The” : FIFTH ELEMENT
23A. Journalistic profession : FOURTH ESTATE
38A. Saying about persistence paying off : THIRD TIME’S A CHARM
48A. Race just over 13 miles long : HALF MARATHON
60A. Entirety, informally : WHOLE SHEBANG

Today’s Wikii-est, Amazonian Googlies
Across
1. Cover during a rain delay : TARP
Originally, tarpaulins were made from canvas covered in tar that rendered the material waterproof. The word “tarpaulin” comes from “tar” and “palling”, with “pall” meaning “heavy cloth covering”.

5. Noon : MIDDAY
Our word “noon”, meaning “midday”, comes from the Latin “nona hora” that translates as “ninth hour”. Back in Ancient Rome, the “ninth hour” was three in the afternoon. Over the centuries, traditions such as church prayers and “midday” meals shifted from 3 p.m. to 12 p.m., and so “noon” became understood as 12 noon.

23. Journalistic profession : FOURTH ESTATE
Nowadays, we use the term “Fourth Estate” to refer to the news media, although the term has also applied to lawyers. It was Anglo-Irish politician Edmund Burke who first linked journalism with “the Fourth Estate”, in 1787 when commenting on the introduction of press reporting of the House of Commons in Britain.

27. Native Kenyans : MASAI
The Masai (also “Maasai”) are a semi-nomadic people found in Kenya and Tanzania. They are semi-nomadic in that over the years they have been migrating from the Lower Nile Valley in northwest Kenya, and are moving into Tanzania.

32. Workplaces for masseuses : SPAS
The word “spa” migrated into English from Belgium, as Spa is the name of a municipality in the east of the country that is famous for its healing hot springs. The name “Spa” comes from the Walloon word “espa” meaning “spring, fountain”.

34. Pie ___ mode : A LA
In French, “à la mode” simply means “fashionable”. In America, the term has also come to describe a way of serving pie, usually with ice cream, or as I recall from when I lived in Upstate New York, with cheese.

35. Six-line stanza : SESTET
A sestet is a group of six lines of poetry similar to a quatrain, a group of four lines.

43. Like many home improvement projects, for short : DIY
Back in Ireland we don’t have “hardware stores” as such, but rather DIY Centres (and that’s the spelling of “centre”). DIY is an abbreviation for “Do It Yourself”.

44. Sicilian volcano : ETNA
Mt. Etna is the largest of three active volcanoes in Italy. Mt Etna is about 2 1/2 times the height of its equally famous sister, Mt. Vesuvius. The third of Italy’s famous volcanoes is Stromboli.

45. Sicilians used to spend them : LIRE
The word “lira” is used in a number of countries for currency. “Lira” comes from the Latin for “pound” and is derived from a British pound sterling, the value of a Troy pound of silver. For example, the lira (plural “lire”) was the official currency of Italy before the country changed over to the euro in 2002.

46. ___ Newtons : FIG
The Fig Newton is based on what is actually a very old recipe that dates back to Ancient Egypt. Whereas we grew up with “Fig Rolls” in Ireland, here in America the brand name “Fig Newton” was used, named after the town of Newton, Massachusetts where they were first produced.

47. Big name in theaters : ODEON
In Ancient Greece an odeon (also “odeum”) was like a small theater, with “odeon” literally meaning a “building for musical competition”. Odea were used in both Greece and Rome for entertainments such as musical shows and poetry readings.

53. Tech giant known as Big Blue : IBM
The origin of the IBM nickname “Big Blue” seems to have been lost in the mists of time. That said, maybe it has something to do with the fact that the IBM logo is blue, and almost every mainframe they produced was painted blue. I remember visiting IBM on business a few times in my career, and back then we were encouraged to wear white shirts and blue suits to “fit in” with our client’s culture.

54. ___ Rift (virtual reality product owned by Facebook) : OCULUS
Oculus Rift is a head-mounted display intended to enhance a virtual reality experience. It is one of the first virtual reality headsets that is focused on the consumer market.

59. Repeating film snippet online : GIF
A bitmap is an image file format used to store digital images. Basically, each pixel in a bitmap file is stored as a “bit” of information, hence the name “bitmap”. In 1987, CompuServe introduced a new type of image file called the Graphics Interchange Format (GIF). A GIF image takes the same information as a bitmap and then compresses it, resulting in a smaller file size. However, during compression the image may lose some resolution. The GIF format also handles short video clips, usually animations.

60. Entirety, informally : WHOLE SHEBANG
The word “shebang” is probably a derivative of “shebeen”, an Irish word for a “speakeasy”, where liquor was drunk and sold illegally. In English “shebang” was originally a “hut” or a “shed”. Just how this evolved into the expression “the whole shebang”, meaning “everything”, is unclear.

Down
1. High-protein food that often comes in cubes : TOFU
Tofu is another name for bean curd, and is a Japanese word meaning just that … bean that has “curdled”. Tofu is produced by coagulating soy milk, using either salt or something acidic. Once the protein has coagulated, the curds are pressed into the familiar blocks. Personally I love tofu dishes, but my wife, she absolutely hates them …

2. Game point, in tennis : AD IN
In tennis, if the score reaches “deuce” (i.e. when both players have scored three points), then the first player to win two points in a row wins the game. The player who wins the point immediately after deuce is said to have the “advantage”. If the player with the advantage wins the next point then that’s two in a row and that player wins the game. If the person with the advantage loses the next point, then advantage is lost and the players return to deuce and try again. If the one of the players is calling out the score then if he/she has the advantage then that player announces “ad in” or more formally “advantage in”. If the score announcer’s opponent has the advantage, then the announcement is “ad out” or “advantage out”. Follow all of that …?

4. Org. against dog or cock fighting : PETA
People for the Ethical Treatment of Animals (PETA) is a very large animal rights organization, with 300 employees and two million members and supporters worldwide. Although the group campaigns for animal rights across a broad spectrum of issues, it has a stated focus in opposition of four practices:

6. Product from Ben & Jerry’s or Baskin-Robbins : ICE CREAM
Ben Cohen and Jerry Greenfield did a correspondence course on ice-cream making in 1977 given by Pennsylvania State University’s Creamery. The following year they opened an ice cream parlor in an old gas station in Burlington, Vermont. Today Ben & Jerry’s has locations in over 20 countries around the world, and theirs was the first brand ice-cream to go into space.

The Baskin-Robbins chain of ice cream parlors is the largest in the word. The chain was founded by Burt Baskin and Irv Robbins in Glendale, California in 1945. The company started using the slogan “31 flavors” in 1953, suggesting that a customer could order a different flavor of ice cream on every day of every month.

9. Advice-dispensing Landers : ANN
“Ask Ann Landers” was an advice column written by Eppie Lederer from 1995 to 2002. Eppie was the twin sister to Pauline Phillips, the person behind “Dear Abby”. Eppie took over the “Ask Ann Landers” column from Ruth Crowley who started it in 1943.

11. Hawaii’s nickname : ALOHA STATE
The Hawaiian word “Aloha” has many meanings in English: affection, love, peace, compassion and mercy. More recently “aloha” has come to mean “hello” and “goodbye”, but only since the mid-1800s.

15. Roman emperor known for his vanity : NERO
The Roman emperor Nero had quite the family life. When Nero was just 16-years-old he married his stepsister, Claudia Octavia. He also had his mother and step-brother executed.

18. Revolutionary music device? : HI-FI
Hi-fi systems were introduced in the late forties, and is audio equipment designed to give a much higher quality reproduction of sound than cheaper systems available up to that point. “Hi-fi” stands for “high fidelity”.

24. ___ fruit (relative of a tangelo) : UGLI
A fruit called a tangelo is a hybrid between a tangerine and either a grapefruit or a pomelo (which gives its the name). A pomelo is a very large, pear-shaped citrus fruit native to Southeast Asia. The Jamaican form of tangelo is known as the ugli fruit.

36. Cube maker Rubik : ERNO
What was originally called the “Magic Cube” became better known as Rubik’s Cube, named for its inventor Ernő Rubik. Rubik’s Cube is the world’s biggest selling puzzle game, with over 350 million sold in just over 30 years.

46. “The Fox and the Grapes” and “The Tortoise and the Hare” : FABLES
Our expression “sour grapes” is an allusion to one of Aesop’s fables, the story of “The Fox and the Grapes”. In the fable, a squirrel could climb up to grapes high in a tree that a fox was unsuccessful in getting to. On seeing this the fox said, “It’s okay, the grapes were sour anyway”.

48. Wrestler Hulk : HOGAN
Hulk Hogan is the stage name (well, “ring name”) for wrestler Terry Gene Bollea. Hogan was big in the eighties and nineties. He fell out of public favor in 2015 when tapes of him making repeated racist remarks were published.

55. Lyft competitor : UBER
Uber is a ridesharing service that was founded in 2009 and is based in San Francisco. The service is somewhat controversial and has been described as an illegal taxicab operation. Central to Uber’s service is the company’s mobile app, which can use the client’s GPS location to help find the nearest available ride. Personally, I love the service and only have had good experiences …

Lyft is a ridesharing service that is based in San Francisco, as is Lyft’s biggest competitor: Uber.

56. Dalai ___ : LAMA
The Dalai Lama is a religious leader in the Gelug branch of Tibetan Buddhism. The current Dalai Lama is the 14th to hold the office. He has indicated that the next Dalai Lama might be found outside of Tibet for the first time, and may even be female.

58. Pepper and Friday: Abbr. : SGTS
Sgt. Pepper’s Lonely Heart Club Band was the alter-ego of the Beatles and was the title of a famous studio album released in 1967.

61. “Bali ___” : HA’I
The song “Bali Ha’i” is from the musical “South Pacific” by Rodgers and Hammerstein. In the musical, Bali Ha’i is the name of a volcanic island that neighbors the island on which the story takes place.