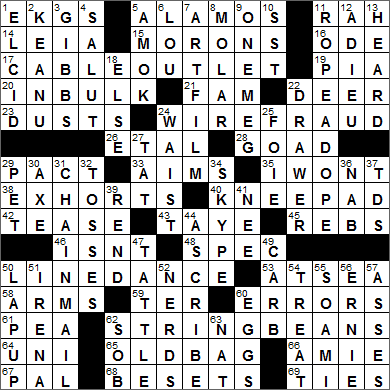 69A. Binds … or a hint to the starts of the answers to the six starred clues : TIES

Today’s Wiki-est, Amazonian Googlies
Across
1. Heart tests, for short : EKGS
An EKG measures electrical activity in the heart. Back in my homeland of Ireland, an EKG is known as an ECG (for electrocardiogram). We use the German name in the US, Elektrokardiogramm, giving us EKG. Apparently the abbreviation EKG is preferred as ECG might be confused (if poorly handwritten, I guess) with EEG, the abbreviation for an electroencephalogram.

5. Los ___, N.M. : ALAMOS
The town of Los Alamos, New Mexico takes its name from the Spanish for “the poplars” or “the cottonwoods”. Famously, it is home to Los Alamos National Laboratory which was founded during WWII to work on the Manhattan Project, the development of the first atomic bomb. The town of Los Alamos didn’t exist as such, until it was planned and constructed to support the employees working on development of the bomb.

14. Sci-fi princess who appears as a hologram : LEIA
In the first “Star Wars” movie, Princess Leia hides plans for the Galactic Empire’s Death Star in the droid named R2-D2. She also records a holographic message, so when it is played we see Princess Leia as a hologram, asking for help to destroy the Death Star:
I have placed information vital to the survival of the Rebellion into the memory systems of this R2 unit. My father will know how to retrieve it. You must see this droid safely delivered to him on Alderaan. This is our most desperate hour. Help me, Obi-Wan Kenobi. You’re my only hope.

15. Nincompoops : MORONS
The rather unsavory term “moron” was formerly used by the medical community to describe someone with a degree of mental retardation. The term comes from the Greek “moros” meaning “foolish, dull”. Back in the early 1900s, IQ tests were used to classify those suffering from mental retardation into categories:

19. Singer Zadora : PIA
Pia Zadora is an American actress and singer. Zadora’s most famous role was in the 1982 film “Butterfly” in which she worked with Orson Welles and Stacey Keach. The film was based on the novel “The Butterfly” by James M. Cain and deals with the difficult subject of father-daughter incest.

29. Nafta, for one : PACT
The North American Free Trade Agreement (NAFTA) is between Canada, Mexico and the United States. When NAFTA came into force in 1994 it set up the largest free trade zone in the world.

43. Diggs of “How Stella Got Her Groove Back” : TAYE
Taye Diggs is an actor most associated with the Broadway show “Rent”, in which he played the nasty landlord Benny. He then co-starred on the television show “Private Practice”. Diggs given name is “Scott”, and the nickname “Taye” comes from saying the given name as “Scottay”.

50. *Electric Slide or Cotton-Eyed Joe : LINE DANCE
The Electric Slide is a line dance that purportedly dates back to 1976. It’s a dance often associated with the 1983 song “Electric Boogie” performed by Marcia Griffiths.

The line dance known as the Cotton-Eyed Joe is inspired by a traditional American country folk song of the same name.

58. Vests don’t cover them : ARMS
Here’s another word that often catches me out. What we call a vest in the US is a waistcoat back in Ireland. And the Irish use the word “vest” for an undershirt.

61. Popeye’s Swee’___ : PEA
Originally Popeye used the nickname “Swee’pea” to address his girlfriend Olive Oyl. Then along comes a baby, found on Popeye’s doorstep. Popeye adopts the little guy and raises him, calling him “Swee’Pea”.

64. Commercial prefix with vision : UNI-
Univision is a Spanish-language television broadcaster based in New York City with production facilities in Doral, Florida.

Down
1. Legendary Spanish hero : EL CID
Rodrigo Diaz de Vivar was known as El Cid Campeador, which translates as “The Champion” or perhaps “The Lord, Master of Military Arts”. El Cid was a soldier who fought under the rule of King Alfonso VI of Spain (among others). However, he was sent into exile by the King in 1080, after acting beyond his authorization in battle. El Cid then offered his services to his former foes, the Moorish kings, After a number of years building a reputation with the Moors, he was recalled from exile by Alfonso. By this time El Cid was very much his own man. Nominally under the orders of Alfonso, he led a combined army of Spanish and Moorish troops and took the city of Valencia on the Mediterranean coast, making it is headquarters and home. He died there, quite peacefully in 1099.

2. Reeves of “The Matrix” : KEANU
Keanu Reeves is a Canadian actor whose most celebrated roles were a metalhead in “Bill & Ted’s Excellent Adventure” (1989), a cop in “Speed” (1994) and the main antagonist Neo in “The Matrix” series of films. Although Reeves is a Canadian national, he was born in Beirut, Lebanon. Reeves has some Hawaiian descent, and the name “Keanu” is Hawaiian for “the coldness”.

3. Barry, Robin and Maurice of the Bee Gees : GIBBS
The Brothers Gibb (hence, the name “The Bee Gees”) were born in England but grew up and started their musical careers in Australia. They moved back to Manchester in the north of England as youths, and there hit the big time.

5. Running ___ : AMOK
The phrase “to run amok” (sometimes “to run amuck”) has been around since the 1670s and is derived from the Malay word for “attacking furiously”, “amuk”. The word “amok” was also used as a noun to describe Malay natives who were “frenzied”. Given Malaya’s troubled history, the natives probably had good reason for that frenzy …

6. “Skip to My ___” : LOU
“Skip to My Lou” is a children’s dance that can also be used at a barn dance as an icebreaker. Couples dance to the tune, with an extra male in the middle of the group. The odd man “steals” a lady with whom to dance, leaving her partner to find another. The word “lou” is the Scottish for “love”.

The bicuspid (also “premolar”) teeth are located between the molar and canine teeth. Adult humans have eight premolars in all. A premolar is called “bicuspid” because each tooth has two cusps, two raised points on the crown.

10. Concorde, e.g., for short : SST
The most famous supersonic transport (SST) is the retired Concorde. Concorde was developed and produced under an Anglo-French treaty by France’s Aérospatiale and the UK’s British Aircraft Corporation (BAC). Concordes were mainly operated by Air France and British Airways, with both companies buying the planes with substantial subsidies from the French and British governments.

11. *Signature Muhammad Ali ploy : ROPE-A-DOPE
The Rumble in the Jungle was that celebrated fight between Muhammad Ali and George Foreman that took place in Zaire (now the Democratic Republic of the Congo). The fight was set in Zaire because of financial arrangements between promoter Don King and Zaire’s President Mobutu Seko. Ali coined the term “Rope-a-dope” to describe his incredibly successful strategy in the contest. From the second round onwards, Ali adopted a protected stance on the ropes letting Foreman pound him with blows to the body and head, with Ali using his arms to dissipate the power of the punches. He kept this up until the eighth round and then opened up and downed the exhausted Foreman with a left-right combination. I hate boxing but I have to say, that was an fascinating fight.

22. Bureau compartment : DRAWER
“Bureau” is the French word for “office, desk”. The term was originally used in French for the cloth covering put on a desk, from “burel”, a coarse woolen cloth used for that covering.

25. Pâté de ___ gras : FOIE
Pâté is a rich spreadable paste made up of a mixture of ground meat and fat, to which various vegetables, herbs and spices may be added. The most famous version of the paste is pâté de foie gras, made from the fattened livers of geese (“foie gras” means “fat liver” in French).

27. Parlor ink, for short : TAT
The word “tattoo” (often shortened to “tat”) was first used in English in the writings of the famous English explorer Captain Cook. In his descriptions of the indelible marks adorning the skin of Polynesian natives, Cook anglicized the Tahitian word “tatau” into our “tattoo”.

31. *Protective medieval gear : CHAIN MAIL
Mail is a type of armor that was worn as far back as 300 BCE. Mail is basically a mesh made of metal rings that are linked together and fashioned into a protective garment.

34. Modern alternative to the telephone : SKYPE
The main feature of the Skype application is that it allows voice communication to take place over the Internet (aka VoIP). Skype has other features such as video conferencing and instant messaging, but the application made its name from voice communication. Skype was founded by two Scandinavian entrepreneurs and the software necessary was developed by a team of engineers in Estonia. The development project was originally called “Sky peer-to-peer” so the first commercial name for the application was “Skyper”. This had to be shortened to “Skype” because the skyper.com domain name was already in use.

37. Scores in the end zone, for short : TDS
Touchdowns (TDs)

49. Nutrition unit in pasta, informally : CARB
Only relatively small amounts of carbohydrate can be stored by the human body, but those stores are important. The actual storage molecule is a starch-like polysaccharide called glycogen, which is found mainly in the liver and muscles. Glycogen is a quick source of energy when required by the body. Most of the body’s energy is stored in the form of fat, a more compact substance that is mobilized less rapidly. Endurance athletes often eat meals high in carbohydrate (carbo-loading) a few hours before an event, so that their body’s glycogen is at optimum levels.

52. Poindexters : NERDS
Poindexter is a character in the television show “Felix the Cat”, which originally aired in the late fifties. He is a nerdy type, wearing a lab coat and glasses with thick lenses. The character lends his name to the term “poindexter”, meaning just that, a nerd.

57. Nincompoops : ASSES
The word “nincompoop”, meaning a fool, seems to have been around for quite a while. It has been used since the 1670s, but no one appears to know its origins.

63. Singer ___ King Cole : NAT
Nat King Cole’s real name was Nathaniel Adams Coles. Cole made television history in 1956 when his own show debuted on NBC, a first for an African-American. Cole couldn’t pick up a national sponsor, so in order to save money and possibly save the show, many guest artists worked for no fee at all – the likes of Ella Fitzgerald, Harry Belafonte and Peggy Lee. The show survived for a year, but eventually Nat King Cole had to pull the plug on it himself.