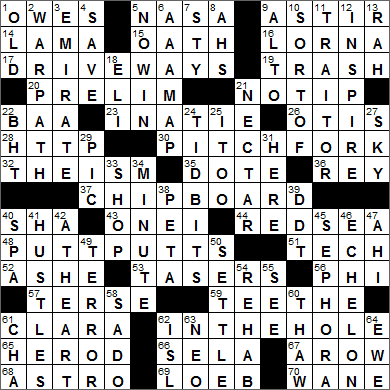 CROSSWORD SETTER: Paula Gamache
THEME: In the Hole … The starts of today’s themed answers take us from the tee to the hole on a golf course:

Today’s Wiki-est, Amazonian Googlies
Across
5. Shuttle program org. : NASA
The Soviet Union launched the Sputnik satellite towards the end of 1957, a development that shocked the establishment in the US. Within months, President Eisenhower created the Advanced Research Projects Agency (ARPA, now DARPA) and the National Aeronautics and Space Administration (NASA). The Space Race had begun …

16. “___ Doone” (1869 historical novel) : LORNA
The novel “Lorna Doone: A Romance of Exmoor” was written by Richard Doddridge Blackmore. R. D. Blackmore was an English novelist, very celebrated and in demand in his day (the late 1800s). His romantic story “Lorna Doone” was by no means a personal favorite of his, and yet it is the only one of his works still in print.

26. Soul singer Redding : OTIS
Otis Redding is often referred to as the “King of Soul”, and what a voice he had. Like so many of the greats in the world of popular music it seems, Redding was killed in a plane crash, in 1967 when he was just 26 years old. Just three days earlier he had recorded what was to be his biggest hit, “(Sittin’ On) The Dock of the Bay”.

32. Belief in the existence of God : THEISM
Broadly speaking, “theism” is the belief that there is at least one god. The term is also used describe the belief in just one god, what is perhaps more accurately referred to as “monotheism”. As such, followers of Christianity, Judaism and Islam would all be classified as theists.

40. ___ Na Na : SHA
Do you remember the band “Johnny Casino & The Gamblers” in the movie “Grease”? That was actually the real-world group Sha Na Na. Johnny Casino & the Gamblers sang “Those Magic Changes” at the high school dance, in between “Rock’N Roll Is Here to Stay” and “Hound Dog”. Sha Na Na got together in the sixties and are still performing today.

44. Waters parted in Exodus : RED SEA
The Red Sea (sometimes called the Arabian Gulf) is a stretch of water lying between Africa and Asia. The Gulf of Suez (and the Suez Canal) lies to north, and the Gulf of Aden to the south. According to the Book of Exodus in the Bible, God parted the Red Sea to allow Moses lead the Israelites from Egypt.

52. Arthur of tennis : ASHE
Arthur Ashe was a professional tennis player from Richmond, Virginia. In his youth, Ashe found himself having to travel great distances to play against Caucasian opponents due to the segregation that still existed in his home state. He was rewarded for his dedication by being selected for the 1963 US Davis Cup team, the first African American player to be so honored. Ashe continued to run into trouble because of his ethnicity though, and in 1968 was denied entry into South Africa to play in the South African Open. In 1979 Ashe suffered a heart attack and had bypass surgery, with follow-up surgery four years later during which he contracted HIV from blood transfusions. Ashe passed away in 1993 due to complications from AIDS. Shortly afterwards, Ashe was posthumously awarded the Presidential Medal of Freedom by President Bill Clinton.

53. Stunning weapons : TASERS
Victor Appleton wrote a novel for young adults called “Tom Swift and His Electric Rifle”. The company that developed the TASER electroshock weapon named its product as a homage to the novel. The acronym TASER stands for “Thomas A. Swift’s Electric Rifle”.

56. ___ Beta Kappa : PHI
Phi Beta Kappa was the first collegiate Greek fraternity in the US, founded in 1776 at the College of William and Mary. The organization served as a model for future collegiate fraternities and sororities, although in the 19th century Phi Beta Kappa distanced itself from the fraternal focus and transformed into the honor society that it is today, recognizing academic excellence. The initials Phi Beta Kappa stand for “philosophia biou kybernētēs”, which translates into “philosophy is the guide of life”. The symbol of the Phi Beta Kappa Society is a golden key.

61. Pioneering nurse Barton : CLARA
Clara Barton was deeply disturbed by her experiences caring for the wounded during the Civil War. She dedicated herself after the war towards American recognition of the International Committee of the Red Cross. The American Red Cross was inevitably formed, in 1881, and Barton was installed as its first president.

65. Biblical king of Judea : HEROD
Herod Agrippa was the grandson of Herod the Great, and like his grandfather was a Roman client king of Judea. It is thought that Herod Agrippa is the “Herod” mentioned in the Bible’s “Acts of the Apostles”, the king who imprisoned Peter and who had killed James son of Zebedee. Agrippa’s grandfather was the King Herod who ordered the Massacre of the Innocents described in the Gospel of Matthew. This was Herod’s attempt to kill the young Jesus by ordering the murder of all boys aged two or younger in Bethlehem and vicinity.

66. Ward of “The Fugitive” : SELA
The actress Sela Ward turns up in crosswords a lot. Ward played Teddy Reed in the TV show “Sisters” in the nineties, and was in “Once and Again” from 1999-2002. I don’t know either show, but I do know Ward from the medical drama “House” in which she played the hospital’s lawyer and Greg House’s ex-partner. That was a fun role, I thought. More recently Ward played a lead role on “CSI: NY” and was a very welcome and much-needed addition to the cast …

“The Fugitive”is a 1993 film based on on the incredibly successful TV series from the sixties. Harrison Ford plays the title character, with Tommy Lee Jones playing the colorful US Marshal in pursuit. Jones won a Best Supporting Oscar for his performance.

69. Lisa with the 1994 #1 hit “Stay (I Missed You)” : LOEB
The singer Lisa Loeb was discovered by actor Ethan Hawke, who lived just across the street from her in New York City. Hawke took a demo of her song “Stay (I Missed You)” and gave it to director Ben Stiller, who in turn used it over the ending credits of his 1994 movie “Reality Bites”. The movie was a hit, the song went to number one, and Loeb became the first artist ever to hit that number one spot without having signed up with a record label. Good for her!

3. Dubai, for one : EMIRATE
Dubai is one of the seven Emirates that make up the federation known as the United Arab Emirates (UAE). The two largest members of the UAE (geographically) are Dubai and Abu Dhabi, the only two of the seven members that have veto power over UAE policy.

11. Judas : TRAITOR
A “judas” is a treacherous person, and a term derived from the disciple named Judas Iscariot. Judas was paid thirty pieces of silver to identify Jesus so that he could be arrested. He did so with a kiss, at which point he was taken by the soldiers of the High Priest Caiaphas and handed over to Pontius Pilate, the prefect of the Roman province of Judea.

21. Food for hummingbirds : NECTAR
Hummingbirds are the smallest of all the birds. The species known as the Bee Hummingbird is native to Cuba and weighs less than a tenth of an ounce and is about two inches in length!

22. Food preservative letters : BHT
Butylated hydroxytoluene (BHT) is a food additive that is allowed in our food. BHT is an antioxidant.

27. Often-difficult part of a jigsaw puzzle : SKY
The original jigsaw puzzles were created by painting a picture on a sheet of wood and then cutting the picture into small pieces using a jigsaw, hence the name. Today, almost all jigsaw puzzles are pictures glued onto cardboard. The puzzle pieces are then die-cut, and there’s no jigsaw involved at all.

38. Antifur org. : PETA
People for the Ethical Treatment of Animals (PETA) is a very large animal rights organization, with 300 employees and two million members and supporters worldwide. Although the group campaigns for animal rights across a broad spectrum of issues, it has a stated focus in opposition of four practices:

39. Banned insecticide : DDT
DDT is dichlorodiphenyltrichloroethane (don’t forget now!). DDT was used with great success to control disease-carrying insects during WWII, and when made available for use after the war it became by far the most popular pesticide. And then Rachel Carson published her famous book “Silent Spring”, suggesting there was a link between DDT and diminishing populations of certain wildlife. It was the public outcry sparked by the book, and reports of links between DDT and cancer, that led to the ban on the use of the chemical in 1972. That ban is touted as the main reason that the bald eagle was rescued from near extinction.

45. International cosmetics chain : SEPHORA
Sephora is a French chain of cosmetic stores, founded in 1969. The name “Sephora” is derived from the Greek for “beauty” (sephos). We’ve been able to visit Sephora outlets in JCPenney stores since 2006.

46. Level of authority : ECHELON
We use the word “echelon” (ech.) to describe a rank or level, particularly in the military. The term comes from French, in which language it has the same meaning, although the original meaning in Old French is “rung of a ladder”.

“Sashimi” is thinly sliced raw fish, although it can also be raw meat. The word “sashimi” translates literally as “pierced body”, which may be a reference to the practice of sticking the tail and fin to sliced fish to identify it.

54. 2007 Record of the Year by Amy Winehouse : REHAB
Amy Winehouse was a much-ridiculed singer from the UK whose life was fraught with very public bouts of drug and alcohol abuse. Winehouse’s lifestyle caught up with her in 2011 when she was found dead from alcohol poisoning. The unfortunate singer was only 27 years old when she died, which means she is now viewed as a member of the “27 Club”. This “club” is made up of famous musicians who all died at the age of 27, including Brian Jones of the Rolling Stones, Jimi Hendrix, Janis Joplin, Jim Morrison of the Doors, and Kurt Cobain of Nirvana.

58. ___-masochist : SADO
A sadist is someone who derives pleasure from inflicting pain, with that pleasure often being sexual in nature. The term “sadist” comes from the Marquis de Sade who was known to exhibit such tendencies.

A masochist, in sexual terms, is someone who gets sexual pleasure in being hurt or abused. The term comes from the name of the Austrian novelist Leopold von Sacher-Masoch who wrote “Venus in Furs”, a novel that features female dominance and male subservience.

61. When doubled or tripled, a dance : CHA
The cha-cha-cha is a Latin dance with origins in Cuba, where it was introduced by composer Enrique Jorrin in 1953.

62. Any of the Florida Keys: Abbr. : ISL
A “key” (also “cay”) is a low island offshore, as in the Florida Keys. Our term in English comes from the Spanish “cayo” meaning “shoal, reef”.