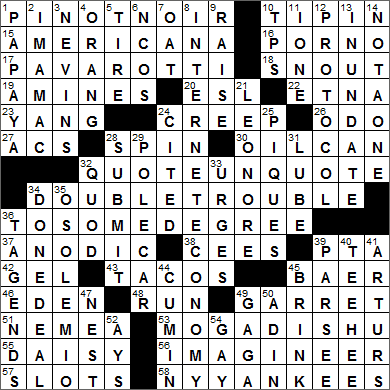 Today’s Wiki-est, Amazonian Googlies
Across
1. Product of Champagne country : PINOT NOIR
The Pinot noir wine grape variety takes its name from the French for “pine” and “black”. The grapes grow in tight clusters shaped like pine cones, and are very dark in color. The Pinot noir grape is most closely associated with Burgundy wines in France, although in recent years the popularity (and price) of California Pinot noir wine has soared after it featured so prominently in the wonderful, wonderful 2004 movie “Sideways”. Grab a bottle of Pinot, and go rent the DVD…

The sparkling wine from the Champagne region of France is produced from black Pinot noir and Pinot Meunier grapes, as well as white Chardonnay.

15. Diners and drive-in theaters : AMERICANA
The world’s first drive-in theater opened near Camden, New Jersey in 1933. The drive-in theater really does represent epitomise what’s fun about America to me, and I still remember my first taste drive-in experience soon after I moved to the US. Great stuff …

17. Singer with the Guinness Book record for greatest number of curtain calls at a single performance (165) : PAVAROTTI
Luciano Pavarotti has to have been one of the most celebrated tenors of all time. He was able to appeal to audiences beyond the traditional fans of opera, helped by his performances “The Three Tenors”, Pavarotti, Placido Domingo and Jose Carreras. Pavarotti made his final performance on stage at the 2006 Winter Olympics in Turin, Italy, where he sang his famous rendition of the moving aria “Nessun dorma” and brought the house down. Pavarotti passed away from pancreatic cancer the following year, at the age of 71.

19. Organic compounds with nitrogen : AMINES
The chemical compounds known as amines are derivatives of ammonia.

20. Course for a prospective citizen, for short : ESL
English as a Second Language (ESL) is sometimes referred to as English for Speakers of Other Languages (ESOL) and English as a Foreign Language (EFL).

22. Place to ski in Italy : ETNA
Mt. Etna is the largest of three active volcanoes in Italy. Mt Etna is about 2 1/2 times the height of its equally famous sister, Mt. Vesuvius. Etna is home to a 110-km long narrow-guage railway, and two ski resorts.

37. Like certain battery ends : ANODIC
A battery is a device that converts chemical energy into electric energy. A simple battery is made up of three parts: a cathode, an anode and a liquid electrolyte. Ions from the electrolyte react chemically with the material in the anode producing a compound and releasing electrons. At the same time, the electrolyte reacts with the material in the cathode, absorbing electrons and producing a different chemical compound. In this way, there is a buildup of electrons at the anode and a deficit of electrons at the cathode. When a connection (wire, say) is made between the cathode and anode, electrons flow through the resulting circuit from the anode to cathode in an attempt to rectify the electron imbalance.

45. Old newspaper humorist Arthur “Bugs” ___ : BAER
Arthur “Bugs” Baer was a sports journalist and cartoonist in New York. Among Baer’s claims to fame is the coining of the nickname “Sultan of Swat” for Babe Ruth.

46. Dystopia’s opposite : EDEN
A dystopia is an imaginary community in which the residents live unhappily and in fear. “Dystopia” is the opposite of “utopia”. One example of such a society is that described by George Orwell in “Nineteen Eighty-Four”.

49. Attic : GARRET
A garret is a room on the top floor of a house, under a gabled roof. It can be another word for an attic.

51. Where Hercules slew the lion : NEMEA
“The Twelve Labors of Hercules” is actually a Greek myth, although Hercules is the Roman name for the hero that the Greeks called Heracles. The first of these labors was to slay the Nemean Lion, a monster that lived in a cave near Nemea. Hercules had a tough job as the lion’s golden fur was impenetrable to normal weapons. One version of the story is that Hercules killed the lion by shooting an arrow into its mouth. Another version says that Hercules stunned the monster with a club and then strangled him with his bare hands.

53. Capital on the Indian Ocean : MOGADISHU
Mogadishu is a major port city on the west coast of Africa, and is the capital of Somalia. The city is known locally as Xamar.

58. Ones getting a Bronx cheer, for short? : NY YANKEES
Not so much here in America, but over in the British Isles “blowing a raspberry” is a way of insulting someone (I think it’s called “a Bronx cheer” in the US). The verb “to razz” comes from a shortened form of “raspberry”.

Down
1. Smoothie fruit : PAPAYA
The papaya is the fruit of the Carica papaya, a large tree-like plant that is native to southern Mexico and Central America. One traditional use of papaya is as a meat tenderizer. The fruit and sap contain the enzyme papain that breaks down meat fibers. Papain is used today as a component of powdered meat tenderizers.

3. Civil War historian Allan : NEVINS
Allan Nevins was a historian known for his books about the American Civil War, and his biographies of the likes of Grover Cleveland, Henry Ford and John D. Rockefeller.

4. Animal in “The Jungle Book,” for short : ORANG
“The Jungle Book” by Rudyard Kipling was originally published in 1894, and is a collection of adventure stories or fables featuring the animals of the jungle and a young boy called Mowgli. The sloth bear who teaches the cubs of a wolf pack the Law of the Jungle is named Baloo. Baloo’s most challenging pupil however is no lupine, but rather the man-cub Mowgli.

6. Base runners, in brief? : NCOS
An NCO is a non-commissioned officer in the armed forces. Usually such an officer is one who has earned his or her rank by promotion through the enlisted ranks. A good example would be a sergeant.

8. Google and Alibaba are parts of it : INTERNET ECONOMY
Google is a remarkably successful and profitable technology company. Google makes most of its money from it AdWords product. Advertisers pay Google a lot of money to place their ads at the most advantageous spots on the Internet.

10. Plays a campus prank on, informally : TPS
TP’ing (toilet papering) is a prank involving the covering of some object or location with rolls and rolls of toilet paper. If you live in Texas or Minnesota, that little “prank” is legal, but if you live here in California it is classed as mischief or vandalism.

21. Heroine of “Fidelio” : LEONORE
“Fidelio” is Ludwig van Beethoven’s one and only opera, and a work that he really struggled with. “Fidelio” tells of a woman named Leonore who disguises herself as a prison guard in order get her condemned husband out of prison.

25. Stimulates : PIQUES
The words “whet” and “pique” can both be used in the sense of sharpening or awaking one’s interest or desire.

29. Leader of the pack? : POLE CAR
The term “pole position” is used in motor racing. It refers to position of the vehicle at the front of the starting grid, the pole car. The term originated with horse racing. The fastest horse to qualify in a race was given the inside track on the course, the position next to the pole at the starting line.

35. Song for which 17-Across won a Grammy : O SOLE MIO
“‘O sole mio” is a famous Italian song from Naples, written in 1898. The song’s lyrics are usually sung in the original Neapolitan, as opposed to Italian. The title translates from Neapolitan into “My Sun” (and not into “O, My Sun” as one might expect). It’s a love song of course, sung by a young man declaring that there is a sun brighter than that in the sky, the sun that is his lover’s face. Awww …

41. Pianist Schnabel and conductor Rodzinski : ARTURS
Artur Schnabel was a classical pianist from Austria, best known for his recording of Beethoven’s piano sonatas.

Artur Rodziński was a classical conductor from Poland who served as music director for the Cleveland Orchestra and the New York Philharmonic in the thirties and forties.

44. Spice in Indian cuisine : CUMIN
Cumin is a flowering plant native to the region stretching from the eastern Mediterranean to East India. Cumin spice is made from the dried seeds and is the second most common spice used in the world (only black pepper is more popular). Cumin is particularly associated with Indian cuisine and is a key ingredient in curry powder. Lovely stuff …

50. Game point situation : AD IN
In tennis, if the score reaches “deuce” (i.e. when both players have scored three points), then the first player to win two points in a row wins the game. The player who wins the point immediately after deuce is said to have the “advantage”. If the player with the advantage wins the next point then that’s two in a row and that player wins the game. If the person with the advantage loses the next point, then advantage is lost and the players return to deuce and try again. If the one of the players is calling out the score then if he/she has the advantage then that player announces “ad in” or more formally “advantage in”. If the score announcer’s opponent has the advantage, then the announcement is “ad out” or “advantage out”. Follow all of that …?