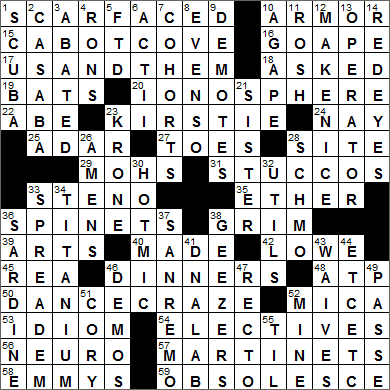 Today’s Wiki-est, Amazonian Googlies
Across
1. Like Blofeld in Ian Fleming’s “You Only Live Twice” : SCAR-FACED
Ernst Stavro Blofeld is a villain in the James Bond universe. Blofeld has been played on the big screen several times by different actors. My favorite is Donald Pleasance in 1967’s “You Only Live Twice”. In the original Ian Fleming novels, Blofeld was born on 28 May 1908, which happens to be Fleming’s own birthday.

10. Some tiltyard paraphernalia : ARMOR
Tilting is the most recognized form of jousting. Jousting can involve the use of a number of different weapons, but when lances are used the competition is called “tilting”. Jousting took place in a roped-off enclosure that was called the lists, or list field. In later medieval times, some castles and palaces had purpose-built “tiltyards” that were used for jousting. Do you remember where the Beach Volleyball events were held in the 2012 London Olympics? Well that was Horse Guards Parade, the former tiltyard for the Palace of Whitehall that was used in the time of King Henry VIII.

Back in the 17th century, “paraphernalia” was a woman’s property, above and beyond that which was classified as her dowry. Nowadays we tend to use the word to mean just “personal belongings”.

15. “Murder, She Wrote” setting : CABOT COVE
“Murder, She Wrote” is a mystery television show with the lead character Jessica Fletcher, a mystery writer who is also an amateur detective. Fletcher is played by the charming Angela Lansbury. The show was created by Richard Levinson and William Link who had just failed with the TV series “Ellery Queen”, which was pulled after only one season. “Ellery Queen” was also about a mystery writer who was an amateur detective.

19. Off one’s rocker : BATS
The expression “bats in the belfry” meaning “mad, crazy” conjures up images of bats flying around Gothic bell towers, but actually it’s a relatively recent addition to our vernacular. The term is American in origin, and dates back only to the early 1900s. The concept is that someone who is “crazy”, with wild ideas flying around his or her head, can be described as having bats (wild ideas) flying around the belfry (head). The terms “bats” and “batty” originated at the same time, and are clearly derivative.

22. Fiver : ABE
The US five-dollar bill is often called an “Abe”, as President Lincoln’s portrait is on the front. An Abe is also referred to as a “fin”, a term that has been used for a five-pound note in Britain since 1868.

23. Alley of reality TV : KIRSTIE
Kirstie Alley was born Kirstie Deal, and takes her stage name from her first marriage, to Robert Alley. Her most famous role was that of Rebecca Howe, Sam Malone’s boss on the sitcom “Cheers” from 1987 to 1993.

25. 29-day month : ADAR
Adar is the twelfth month of the Hebrew ecclesiastical calendar. Ada is equivalent to February-March in the Gregorian calendar.

29. Inventor of a mineral hardness scale : MOHS
The Mohs scale of mineral hardness was developed in 1812 by Friedrich Mohs. Basically Mohs took minerals and scratched them with other minerals. In this way he was able to determine which minerals were hardest (most scratch resistant) and which softest.

31. Covers with a trowel, say : STUCCOS
Stucco is a decorative coating that is applied to walls and ceilings. “Stucco” is the Italian name for the material, and a word that we imported into English.

33. One whose work hours may involve minutes : STENO
Stenography is the process of writing in shorthand. The term comes from the Greek “steno” (narrow) and “graphe” (writing).

35. It’s a knockout : ETHER
Ethers are a whole class of organic compounds, but in the vernacular “ether” is specifically diethyl ether. Diethyl ether was once very popular as a general anesthetic.

36. Small pianos : SPINETS
A spinet is the name given to a smaller version of keyboard instruments, such as the harpsichord, piano or organ. Spinets are still made today, as smaller and cheaper versions of full-size instruments.

42. Brat Pack name : LOWE
The actor Rob Lowe is one of the “founding members” of the so-called Brat Pack, having appeared in the movie “St. Elmo’s Fire”. More recently, he played a regular character on the TV show “Parks and Recreation”. My favorite of his roles though, was playing Sam Seaborn on Aaron Sorkin’s great drama series “The West Wing”. When “The West Wing” first aired, Seaborn was billed as the show’s main character, but outstanding performances from the rest of the cast and some great writing meant that Lowe’s role became “one of many”. This led to some dissatisfaction on Lowe’s part, and eventually he quit the show.

The Brat Pack moniker is reminiscent of the Rat Pack of the fifties and sixties (Franks Sinatra & co.). To qualify as a “founding” member of the Brat pack the actor had to appear in either “The Breakfast Club” or “St. Elmo’s Fire”, or both. So we have Emilio Estevez, Anthony Michael Hall, Rob Lowe, Andrew McCarthy, Demi Moore, Judd Nelson, Molly Ringwald and Ally Sheedy.

45. Mens ___ (criminal intent) : REA
“Mens rea” is Latin for “guilty mind” and is a central concept in criminal law. The concept is expanded to “actus non facit reum nisi mens sit rea” meaning “the act does not make a person guilty unless the mind be also guilty”. In other words, a someone should not be deemed guilty of an act, unless he or she had a “guilty mind”, intended to do wrong.

50. Chicken or mashed potato : DANCE CRAZE
The Chicken Dance is performed to an oom-pah song usually called the “Birdie Song” that was composed in Switzerland in the fifties. A version of “The Birdie Song” was released in 1981 by the Tweets as a novelty tune and it became a surprising chart hit, and everyone started doing the Chicken Dance at dances right across the country.

53. Challenge for an E.S.L. student : IDIOM
English as a Second Language (ESL) is sometimes referred to as English for Speakers of Other Languages (ESOL) and English as a Foreign Language (EFL).

57. Disciplinarians : MARTINETS
A martinet is someone who is a hard taskmaster and someone who sticks to the rules. Our use of the term is said to come from Jean Martinet, an Inspector General in the army of Louis XIV of France. Martinet was a noted drill master and disciplinarian.

58. Show of shows, with “the” : EMMYS
The Emmy Awards are the television equivalent of the Oscars in the world of film, the Grammy Awards in music and the Tony Awards for the stage. Emmy Awards are presented throughout the year, depending on the sector of television being honored. The most famous of these ceremonies are the Primetime Emmy Awards and the Daytime Emmy Awards. The distinctive name of “Emmy” is a softened version of the word “immy”, the nickname given to the video camera tubes found in old television cameras.

A SCUBA diver might visit a school of fish while underwater, if he or she can catch them …

2. Yellow-skinned fruit : CASABA
A casaba is type of honeydew melon. The casaba takes its name from the Turkish city of Kasaba, from where the fruit was imported into America in the late 1800s.

4. Cey and Darling of baseball : RONS
Ron Cey played third base for the Dodgers, the Cubs and the As.

5. Co. with budding prospects? : FTD
Back in 1910, fifteen florists from around America agreed to fulfill each other’s orders using the telegraph system, setting up what they called the Florists’ Telegraph Delivery. The concept grew so large that in 1965 the group started to offer international service, and changed its name to Florists’ Transworld Delivery (FTD).

6. When Musetta’s waltz is heard in “La Bohème” : ACT II
“La bohème” by Giacomo Puccini is the second most frequently performed opera in the US (after Puccini’s “Madama Butterfly”). The lead female role in the piece is Mimì, a seamstress. The contemporary stage musical “Rent” is a retelling of “La bohème”.

11. Start of a holy day? : ROSH
Rosh Hashanah is loosely referred to as “Jewish New Year”. The literal translation from Hebrew is “head of the year”.

23. Scandinavian coin with a hole in it : KRONE
“Krone” translates into English as “crown”, and was the name given to coins that bore the image of the monarch in several countries. Today, the krone is the name given to the currency of Norway and of Denmark. Some of the Norwegian and Danish kroner have holes in the middle, giving them a “doughnut” or “torus” shape.

28. Dummy : SCHMO
“Schmo” (also “shmo”) is American slang for a dull or boring person, from the Yiddish word “shmok”.

30. Source of some political gaffes : HOT MIC
Our word “gaffe” , meaning a social blunder, comes from the French word “gaffe” meaning “clumsy remark”, although it originally was the word for “boat hook”. The exact connection between a boat hook and a blunder seems to be unclear.

32. Monopoly pair: Abbr. : UTILS
In most versions of the board game Monopoly, the two utilities are Water Works and Electric Company.

37. Italian Riviera city : SAN REMO
The Italian city of San Remo sits on the Mediterranean, right on the border with France. In Italian the city is named Sanremo, just one word, although the spelling of “San Remo” dates back to ancient times.

47. Odd-numbered page : RECTO
The left and right pages of a book or magazine are known in publishing circles as verso and recto. Recto comes from the Latin for “right”, and verso comes from the Latin word for “turned”. The idea is that the left side of the page is “turned” and is the reverse of the recto/right side.

51. Sen. Booker of New Jersey : CORY
Cory Book has been a US Senator for New Jersey since 2013, having previously served as the Mayor of Newark. Booker is one of the few vegetarians in the US Congress.