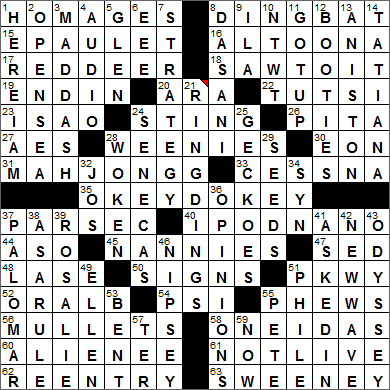 Today’s Wiki-est, Amazonian Googlies
Across
8. Yo-yo : DINGBAT
The word “dingbat” has been used to mean a “fool” since the early 1900s. It became very popular after it was used repeatedly by Archie Bunker in the seventies TV show “All in the Family”.

16. Home of a Penn State campus : ALTOONA
Altoona is in central Pennsylvania, and is home to the Ivyside Park Campus of Pennsylvania State University.

17. Alberta city named after a quadruped : RED DEER
Red Deer is the third-most populous city in the province of Alberta, after Calgary and Edmonton. One might argue that the city should be called Wapiti or Elk, as the name is a European translation of the Cree name for the river on which the city stands: Waskasoo Seepee (Wapiti/Elk River). The first British traders thought that the North American Elk or wapiti was a type of European red deer, but in fact they are different species.

22. Rwandan minority : TUTSI
The Tutsi are the second largest population of people in Rwanda, with the Hutu being the largest group. The bloody conflict that has existed between the Tutsi and Hutu peoples dates back to about 1880 when Catholic missionaries arrived in the region. The missionaries found that they had more success converting the Hutus than the Tutsi, and when the Germans occupied the area during WWI they confiscated Tutsi land and gave it to Hutu tribes in order to reward religious conversion. This injustice fuels fighting to this very day.

24. Unpleasant surprise from a worker : STING
A worker bee might give you a sting.

26. Mediterranean restaurant staple : PITA
Pita is a lovely bread in Middle-Eastern and Mediterranean cuisines. Pita is usually round, and has a “pocket” in the center. The pocket is created by steam that puffs up the dough during cooking leaving a void when the bread cools. The pockets were a big hit in the seventies when someone came up with the idea of using them for fillings hence creating pita sandwiches or “pita pockets”.

27. 1950s runner’s inits. : AES
Adlai Stevenson (AES) ran for president unsuccessfully against Dwight D. Eisenhower in 1952 and in 1956. Some years after his second defeat, Stevenson served under President Kennedy as Ambassador to the United Nations. Stevenson was always noted for his eloquence and he had a famous exchange in a UN Security Council meeting during the Cuban missile crisis. Stevenson bluntly demanded that the Soviet representative on the council tell the world if the USSR was installing nuclear weapons in Cuba. His words were “Don’t wait for the translation, answer ‘yes’ or ‘no’!” followed by “I am prepared to wait for my answer until Hell freezes over!”

30. The Hadean was the earth’s first one : EON
The Hadean isn’t an official geologic eon, but it is noted as the “age” just after the Earth formed, about 4.5 billion years ago. The name “Hadean” comes from the Greek word “Hades” meaning “Underworld”.

31. Four winds are featured in it : MAHJONGG
“Mahjong” (also “mahjongg” and “mah-jongg”) is the Chinese word for “sparrow”. Mahjong is a game that originated in China, and is usually played by four players. There is a myth that the game was developed by the Chinese philosopher, Confucius. The myth also suggests that Confucius was fond of birds, and hence chose the name “sparrow”.

33. Skylane maker : CESSNA
The Cessna Aircraft manufacturing company was founded in 1911 by Clyde Cessna, a farmer from Kansas. Cessna is headquartered in Wichita and today has over 8,000 employees.

37. Distance light travels in 3.26 years : PARSEC
A parsec is a measure of length or distance used in astronomy. One parsec is equal to about 19.2 trillion miles.

40. Very light player : IPOD NANO
The iPod Nano is the successor to the iPod Mini and was introduced to the market at the end of 2005. There have been seven versions of the Nano to date and the current Nano as well as playing tunes is an FM player, records voice memos, has a pedometer and can connect with external devices (like a heart monitor, maybe) using Bluetooth technology.

47. “Non sibi ___ patriae” (Navy motto) : SED
The motto of the US Navy is “Non sibi sed patriae”, which translates from Latin as “Not for self but for country”.

51. N.Y.C.’s F.D.R. Drive, e.g. : PKWY
The full name of the parkway known as FDR Drive in New York City is the Franklin D. Roosevelt East River Drive. The FDR is a parkway that runs along the East River for almost ten miles through Manhattan. A large portion of the road is built on rubble that came from Bristol, England during WWII. The rubble from the bombed city was loaded as ballast on ships returning to the US after having delivered war supplies to England.

52. Brand with a Pro-Health product line : ORAL-B
The Oral-B toothbrush was introduced to the world in 1950, designed by a California periodontist. The first “model” was the Oral-B 60, a name given to reflect the 60 tufts in the brush. In 1969, the Oral-B was the first toothbrush to get to the moon as it was the toothbrush of choice for the crew of the Apollo 11 spacecraft.

54. Inflation fig. : PSI
Pounds per square inch (PSI) is a measure of pressure.

56. Retro hairstyles : MULLETS
A mullet haircut is one that is short at the front and sides, and long in the back.

58. New York natives : ONEIDAS
The Oneida people originally lived in the area that is now Central New York. The Oneida were one of the five founding nations of the Iroquois Confederacy, also known as the Five Nations (the Mohawk, Oneida, Onondaga, Cayuga and Seneca).

60. Grant recipient : ALIENEE
An alienee is one to whom ownership of property is transferred.

62. Event near the end of a mission : REENTRY
When a spacecraft reenters the earth’s atmosphere, it compresses the air in front of it creating a tremendous amount of heat. This heated air ionizes and surrounds the vehicle. The ionized air interferes with radio signals leading to the famous spacecraft reentry communications blackout. This blackout lasted for about 3 minutes for each of the Apollo missions. Famously, the miraculous Apollo 13 spacecraft entered the atmosphere at a much shallower angle than was routine, and the resulting blackout lasted for a nail-biting 6 minutes.

63. Actress who starred in the “It’s Pat” sketches on “S.N.L.” : SWEENEY
The androgynous character known as “Pat” on “Saturday Night Live” was played by the comedienne Julia Sweeney. Pat appeared in a 1994 movie called “It’s Pat”, which is one of the worst films of all time, I am told …

Down
3. Black Friday event? : MAD DASH
In the world of retail, “Black Friday” is the day after Thanksgiving in the US. Black Friday is when many stores start the holiday shopping season, and so offer deep discounts to get ahead of the competition.

5. Highland lowland? : GLEN
The Scottish Highlands are that part of the country that is not classified as the Lowlands. The Highlands make up the north and west of Scotland.

7. Chess necessity : STRATEGY
It is believed that the game of chess originated in northwest India, evolving from a 6th-century game called “chaturanga”, a Sanskrit word meaning “four divisions”. These four (military) divisions were represented in the game:

13. “The Switch” co-star, 2010 : ANISTON
Jennifer Aniston won a 2002 Emmy for playing Rachel on the great sitcom “Friends”. Jennifer’s parents are both actors, and her godfather is the actor Telly Savalas.

“The Switch” is a romantic comedy film released in 2010 starring Jennifer Aniston and Jason Bateman. The movie’s plot hinges on a “switched” sperm sample.

21. Alternative to Ho Hos : RING DINGS
Ring Dings are round, chocolate-coated and creme-filled snack cakes introduced in 1958 by Drake’s Cakes.

Ho Hos snack cakes were first produced in San Francisco in 1967; not the best thing to come out of the sixties I’d say …

24. New York natives : SENECAS
The Seneca nation’s name came from their principal village of Osininka. There is no link at all with Seneca the famous Roman statesman, and the similarity in name is just a coincidence.

25. Creatures that can lick their own eyes : GECKOES
The word “gecko” comes from an Indonesian/Javanese word “tokek”, which is imitative of the reptile’s chirping sound. In making such a sound, geckos are unique in the world of lizards. More interesting to me than a gecko’s chirping is its ability to cling to walls and to other vertical surfaces. Their feet are specially adapted with “toes” that make extremely intimate, close contact to a surface. The toes have millions of hairs called setae that enable the clinging. It isn’t suction that supports them, but rather van der Waals forces (weak “gravitational” attractions). Fascinating stuff …

29. Ones who might be upset : SEEDS
A “seeded” player or team in a tournament is one given a preliminary ranking that is used in the initial draw. The intention is that the better competitors do are less likely to meet each other in the early rounds.

The author Louisa May Alcott was raised in Massachusetts. She had quite an education and received lessons from Henry David Thoreau, Ralph Waldo Emerson, Nathaniel Hawthorne and Margaret Fuller, all of whom were friends of her family. Alcott’s first book was Flower Fables (1849), which he wrote for Ralph Waldo Emerson’s daughter. The Alcott family were part of the Underground Railroad that helped and housed fugitive slaves. During the Civil War, Alcott worked for a while as a nurse in the Union Hospital in Georgetown, D.C. Her most famous novels are unofficially known as the “Little Women” trilogy, namely “Little Women”, “Little Men” and “Jo’s Boys”.

39. “Twilight” vampire ___ Hale : ROSALIE
The reference is to a character in the “Twilight” series of books by Stephenie Meyer. “The Twilight Saga” is a series of films based on the books. The “Twilight” books feature vampires, and I don’t do vampires …

43. It tells of a trip to Ithaca : ODYSSEY
Ithaca is a Greek island in the Ionian Sea. Ithaca featured in Homer’s “Odyssey” as it was the home of the mythological hero Odysseus.

46. Russell of comedy : NIPSEY
Nipsey Russell was a comedian who was best known as a panelist on game shows like “Match Game”, Password”, “Hollywood Squares”, :To Tell the Truth” and “Pyramid”. Russell also played the Tin Min in the 1978 musical film “The Wiz”.

49. First name in talk shows : ELLEN
Ellen DeGeneres is a very, very successful TV personality, having parlayed her career in stand-up comedy into lucrative gigs as an actress and talk show host. Back in 1997 DeGeneres chose the “Oprah Winfrey Show” to announce that she was a lesbian. Her character on “The Ellen Show” also came out as a lesbian in a scene with her therapist, who was played by Oprah Winfrey. Nice twist!

55. Rose with many hits : PETE
Pete Rose was a talented baseball player who holds the record for all-time Major League hits. In recent years of course his reputation has been tarnished by admissions that he bet on games in which he played and managed.

59. Oxymoronic lead-in to “then” : NOW
The word “oxymoron” is in itself an oxymoron, as it is derived from the Greek words “Oxys” and “moros” meaning “sharp” and “stupid”.