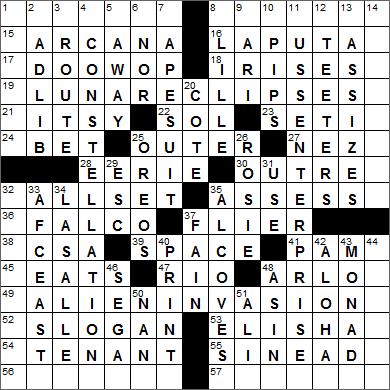 CROSSWORD SETTER: Timothy Polin
THEME: There is a note accompanying each of this week’s crosswords:

In today’s puzzle, we are dealing with OUTER SPACE. We have four long answers that relate to the concept of OUTER SPACE:

1A. Entry forms : BLANKS
8A. You might draw them when answering questions : BLANKS
56A. Billy of infomercials : BLANKS
57A. Voids, with “out” : BLANKS
1D. Valuable things to have in Scrabble : BLANKS
14D. Doesn’t remember, as something obvious, with “on” : BLANKS
32D. What starter pistols shoot : BLANKS
44D. Unstamped metal discs used for making coins : BLANKS

Something that is “abstruse” is esoteric, hard to understand. The term comes from the Latin “abstrusus” meaning “hidden, concealed”, or more literally “thrust away”.

16. Floating island visited in “Gulliver’s Travels” : LAPUTA
Laputa is the name of a floating island in Jonathan Swift’s satirical novel “Gulliver’s Travels”. The island is circular, about nine miles across, and floats above a land called Balnibarbi. The inhabitants of Laputa are well-educated, although the society is dominated by males and ruled by a tyrannical king.

17. Barbershop relative : DOO-WOP
Doo-wop developed in the 1940s and can be described as a vocal-based R&B music. Even though the style has been around since the forties, the name doo-wop wasn’t introduced until the early sixties.

18. Van Gogh masterpiece : IRISES
Van Gogh painted his “Irises” while he was in an asylum in the south of France the year before he committed suicide. The original owner was a French art critic and supporter of Van Gogh who paid 300 francs to purchase the painting. “Irises” was bought for $53.9 million in 1987 making it the most expensive painting sold up to that point. But, the buyer didn’t actually have the necessary funds, so it had to be resold in 1990. It was picked up by the J. Paul Getty Museum in Los Angeles, where you can see it today.

21. Lilliputian, informally : ITSY
The word “lilliputian” meaning “wee” or “very small”, comes from Jonathan Swift’s “Gulliver’s Travels”. In Swift’s tale, Lilliput and Blefuscu are two island nations that are inhabited by tiny people who are under six inches tall.

22. Sun : SOL
Sol was the Roman god personifying the sun.

23. Project that analyzes electromagnetic radiation, for short : SETI
SETI is the name given to a number of projects that are searching for extraterrestrial life. The acronym stands for “search for extraterrestrial intelligence”. One of the main SETI activities is the monitoring of electromagnetic radiation (such as radio waves) reaching the Earth in the hope of finding a transmission from a civilization in another world.

Electromagnetic radiation can take many forms, such as radio waves, infrared light, X-rays and visible light. Electromagnetic waves are oscillations of electric and magnetic fields that propagate perpendicular to each other at the speed of light.

25. With 39-Across, region beyond the Kármán line … or a literal hint to what this puzzle has : OUTER
39. See 25-Across : SPACE
The exploration and use of outer space is governed by the Outer Space Treaty that came into force in 1967. The initial signatories were the US, UK and USSR, and now 102 nations are party to the treaty. For the purposes of the treaty, outer space begins at the Kármán line, a theoretical sphere that lies at an altitude of 100km about the Earth’s sea level.

30. Weird : OUTRE
The word “outré” comes to us from French, as you might imagine, derived from the verb “outrer” meaning “to overdo, exaggerate”. “Outrer” is also the ultimate root of our word “outrage”.

36. Singer with the 1986 #1 hit “Rock Me Amadeus” : FALCO
The Austrian pop singer Falco was the only artist to get to number one in the US with a German-language song, doing so in 1986 with “Rock Me Amadeus”. Sadly, Falco died at 40 years of age, in a collision with a bus in the Dominican Republic.

38. ’60s org. : CSA
The Confederate States of America (CSA) set up government in 1861 just before Abraham Lincoln took office. Jefferson Davis was selected as President of the CSA at its formation and retained the post for the life of the government.

41. Canola oil product : PAM
PAM cooking oil was introduced in 1961 by Leon Rubin and Arthur Meyerhoff. The name “PAM” is an acronym … standing for “Product of Arthur Meyerhoff”. Who’d a thunk it …?

45. Grub : EATS
“Grub” is slang for food. The word “grub” has been used in this sense since way back in the 1600s, possible derived from birds eating grubs.

47. Exotic “Now, Voyager” setting : RIO
The 1942 movie “Now, Voyager” stars Bette Davis, Paul Henreid and Claude Rains. The film is based on a novel of the same name by Olive Higgins Prouty. Prouty got the title of her book from the Walt Whitman poem “The Untold Want”:

48. Comic strip husband : ARLO
The comic strip “Arlo and Janis” is written by Jimmy Johnson. Introduced in 1985, Arlo and Janis are a baby booming couple with an easy approach to life, and who are very much in love.

49. Recurrent “Twilight Zone” plot device : ALIEN INVASION
The iconic television series called “The Twilight Zone” first aired in 1959 and then ran for 156 episodes before being pulled in 1964. “The Twilight Zone” was revived for four years in the late eighties, and was also spun-off into a movie by Steven Spielberg in 1983.

52. Pitch-perfect words? : SLOGAN
Our word “slogan” comes from the Gaelic “sluagh-ghairm”, which was a battle cry used in Scotland and Ireland. We’ve been using “slogan” to mean a phrase used by a political or other movement since the early 1700s.

53. Wonder-working prophet in II Kings : ELISHA
The prophet Elisha is mentioned both in the Hebrew Bible and the Qur’an. In the Islamic tradition, Elisha is usually known by his Arabic name, Alyasa.

54. Typical Manhattanite : TENANT
I guess most people are renting in Manhattan …

56. Billy of infomercials : BLANKS
Billy Blanks is a fitness guru and the creator of the exercise program known as Tae Bo.

Down
1. Valuable things to have in Scrabble : BLANKS
The game of Scrabble has been produced in many international versions, and each of these editions has its own tile distribution to suit the local language. For example, in English we have two tiles worth ten points: one “Q” and one “Z”. If you play the game in French then there are five tiles worth ten points: one “K”, one “W”, one “X”, one “Y” and one “Z”.

2. It can’t be canned : AD LIB
“Ad libitum” is a Latin phrase meaning “at one’s pleasure”. In common usage the phrase is usually shortened to “ad lib”. On the stage the concept of an “ad lib” is very familiar. For example, an actor may substitute his or her own words for forgotten lines using an ad lib, or a director may instruct an actor to use his or her own words at a particular point in a performance to promote a sense of spontaneity.

“Canned” is an informal term meaning “prepared in advance”, as in a canned speech. In this sense, one can’t “can” an ad lib, as by definition an ad lib is unprepared.

4. Hercules or Perseus : CONSTELLATION
The constellation of Hercules is named for the hero of Roman myth. Roman Hercules is based on the Greek hero Heracles.

The constellation of Perseus is named for the hero of Greek myth who beheaded the Gorgon Medusa.

8. French metropolis near the Belgian border : LILLE
Lille is a large city in the very north of France sitting right on the border with Belgium. The name “Lille” is a derivation of the term “l’isle” meaning “the island”.

11. Setting for many sci-fi stories : USS ENTERPRISE
The USS Enterprise is a starship in the “Star Trek” universe (pun!). There have been several generations of starship with the name Enterprise, starting with the vessel numbered NCC-1701, which appeared in the original TV series. My favorite “Star Trek” series is “Next Generation”, which features USS Enterprise NCC-1701-D.

13. Old English county court sessions : ASSIZES
The assizes (also “courts of assize”) were a precursor to the Crown Court that is used in England Wales today. The term “assize” comes from the Old French “assise” meaning “sitting of a court”, which in turn comes from “asseoir” meaning “to cause to sit”.

20. Bird house : COTE
The Old English word “cote” was used for a small house. Our modern word “cottage” comes from “cote”. We now use “cote” to mean a small shelter on a farm for sheep or birds.

26. W.W. II poster girl : ROSIE
Rosie the Riveter is a cultural icon that represented women working in factories across the country during WWII as part of the war effort. The term “Rosie the Riveter” first appeared as the title of a 1942 song that was a national hit.

The Miami Dolphins football team was founded in 1966, by politician Joe Robbie and the comedian Danny Thomas.

34. Explorer born René-Robert Cavelier : LA SALLE
Robert de La Salle (more completely “René-Robert Cavelier, Sieur de La Salle”) was an explorer famous for his exploits in North America. La Salle’s expeditions brought him from the Great Lakes in the north of the modern-day US to the Gulf of Mexico in the south.

42. Greeting that means “love” or “peace” : ALOHA
The Hawaiian word “Aloha” has many meanings in English: affection, love, peace, compassion and mercy. More recently “aloha” has come to mean “hello” and “goodbye”, but only since the mid-1800s.

43. Unicellular organism : MONAD
A monad is a single-celled organism, especially on of the genus Monas, a flagellate protozoan.

46. Creator of Saturn : SEGA
The Sega Saturn is a video console that was released in the mid-nineties as the successor to the Sega Genesis system. Apparently, the Saturn was not a big success …

50. Bread in some ethnic cuisine : NAN
Naan (also “nan”) bread is very popular in Indian restaurants, as well as in other West, Central and South Asian cuisines. Indian Naan is traditionally baked in a clay oven known as a tandoor.

51. Winning party in Clay v. United States : ALI
The boxer Muhammed Ali was classified as ineligible for the draft in 1964 due to poor writing and spelling skills. The standards were lowered in 1965, and Ali was notified in 1966 that he was eligible to serve in the US Armed Forces. When notified as such, Ali publicly declared himself a conscientious objector on religious grounds. Ali was in fact drafted and refused to serve in 1967. At that point his boxing license was suspended and he was stripped of his World Heavyweight title. Ali was convicted for refusing to to report for induction during the Vietnam War. Ultimately, the US Supreme Court reversed the decision to convict on the grounds that the government had failed to properly specify why Ali’s application for conscientious objector classification had been denied.