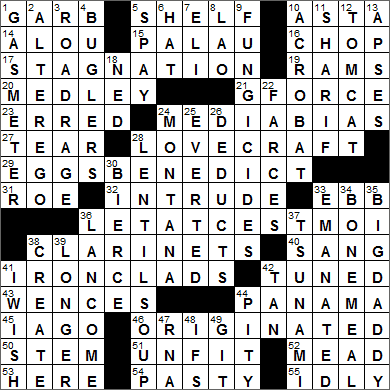 Today’s Wiki-est, Amazonian Googlies
Across
5. Continental ___ : SHELF
The shallow waters surrounding most of a continent lie above what’s called a continental shelf. The similar underwater landmass surrounding an island is called an insular shelf.

10. 1930s film canine : ASTA
Asta is the wonderful little dog in the superb “The Thin Man” series of films starring William Powell and Myrna Loy (as Nick and Nora Charles). In the original story by Dashiell Hammett, Asta was a female Schnauzer, but on screen Asta was played by a wire-haired fox terrier called “Skippy”. Skippy was also the dog in “Bringing up Baby” with Cary Grant and Katharine Hepburn, the one who kept stealing the dinosaur bone. Skippy retired in 1939, so Asta was played by other dogs in the remainder of “The Thin Man” films.

14. Jesus in the outfield : ALOU
Jesus Alou played major league baseball, as did his brothers Matty and Felipe, and as does Felipe’s son Moises.

15. Pacific island country that uses U.S. currency : PALAU
Palau is a tiny island nation lying 500 miles east of the Philippines, and 2,000 miles south of Japan. Palau was once a Spanish possession and was sold by Spain to Germany in the late 19th century. During WWI, Japan invaded the islands (as Japan had declared war on Germany) and was awarded the islands as a territory by the League of Nations at the end of hostilities. In WWII the US took Palau from the Japanese in a bloody battle in 1944. Palau emerged from American administration in 1994 and is now a sovereign state.

19. Merlin Olsen’s team : RAMS
Merlin Olsen played in the NFL with the LA Rams. Olson was selected to the Pro Bowl 14 a record 14 times (shared with Bruce Matthews). After retiring from the game, his career continued to flourish. He worked as a sports broadcaster for many years, and then landed a major role on television’s “Little House on the Prairie”, playing Jonathan Garvey. In one episode, Garvey was to help coach a boy’s football team, so the writers gave Olsen’s character the tongue-in-cheek line “I don’t know nothin’ about football!” Olsen was also the commercial face of FTD florists for many years. Olson passed away in March 2010, aged 69.

21. Cause of “fainting in the air” : G-FORCE
A G-suit is needed when astronauts and aviators are subject to high accelerations. Such acceleration can cause blood to pool in the lower part of the body, reducing the supply to the brain and possibly leading to a blackout. A G-suit is basically a special pair of tight-fitting pants that are fitted with inflatable bladders. The bladders inflate during high accelerations, tightening around the legs and abdomen, reducing the amount of blood pooling. So, a “G-suit” is more correctly referred to as an “anti-G suit”.

28. Horror author who wrote “The Call of Cthulhu” : LOVECRAFT
H. P. Lovecraft was an author of horror, fantasy and science fiction. His books aren’t my cup of tea …

29. Breakfast dish with hollandaise sauce : EGGS BENEDICT
Eggs Benedict is a dish traditionally served at an American breakfast or brunch. It usually consists of a halved English muffin topped with ham and poached eggs, all smothered in Hollandaise sauce. The exact origin of the dish is apparently debated, but one story is that it is named for a Wall Street stockbroker called Lemuel Benedict. In 1894 in the Waldorf Hotel, Benedict ordered toast, poached eggs, crispy bacon and Hollandaise sauce as a cure for his hangover. The hotel’s maître d’ Oscar Tschirky was impressed by the dish and added the variant that we use today to the hotel’s menu, naming it for the gentleman who had first ordered it.

Hollandaise sauce is a mixture of egg yolk and melted butter that is then seasoned, usually with lemon juice, salt and pepper. Hollandaise has an exalted position in French cuisine. Although the origin is debated, some say that the recipe was invented in the Netherlands and taken to France by the Huguenots, hence the name “Hollandaise” meaning “of Holland”.

36. The Sun King’s infamous declaration : L’ETAT, C’EST MOI
“L’État, c’est moi” is a French phrase, supposedly spoken by Louis XIV on his deathbed. It translates to “I am the State”, and would appear to mean that Louis considered himself to be “above his station” as it were. However, many dispute the quotation, and argue that Louis actually said on his deathbed that even though he was dying, the State would live on.

Louis XIV is perhaps the most famous of the kings (“rois”) of France and was known as the “Sun King” (le Roi Soleil”). Louis XIV was king from 1638 to 1715. That reign of over 72 years is the longest reign of any European monarch.

38. Black winds : CLARINETS
The clarinet is a lovely-sounding instrument, isn’t it? The name comes from the Italian word “clarino” meaning “trumpet” with the “-et” suffix indicating “small”.

41. Civil War ships : IRONCLADS
Ironclads were steam-powered warships used in the mid-to late-1800s. The vessels earned got their name from the iron or steel plates used as armor around the keel and deck. Although deployed by the likes of the French and British navies, the first ironclads to go into battle did so during the American Civil War.

44. With 6-Down, bit of summer wear : PANAMA
(6. See 44-Across : HAT)
Panama hats are also known as Jipijapas, named for a town in Ecuador (and not Panama, surprisingly) that was a major player in the hat trade.

45. “I will wear my heart upon my sleeve” speaker, in Shakespeare : IAGO
Iago is the schemer in Shakespeare’s “Othello”. Iago is a soldier who fought alongside Othello and feels hard done by, missing out on promotion. He hatches a plot designed to discredit his rival Cassio by insinuating that Cassio is having an affair with Desdemona, Othello’s wife. By the end of the play it’s Iago himself who is discredited and Othello (before committing suicide) apologizes to Cassio for having believed Iago’s lies. Heavy stuff …

52. “Beowulf” beverage : MEAD
Mead is a lovely drink, made from fermented honey and water.

“Beowulf” is an old epic poem from England, although the story is set in Scandinavia. There’s a lot of drinking of mead in the poem, in mead-halls, sitting on mead-benches. All part of that feasting tradition …

54. Cadaverous : PASTY
“Cadaver” is the Latin word for a dead body, and a word we’ve been using in English since about 1500.

Down
5. Fix : SPAY
Our verb “to spay”, meaning “to surgically remove the ovaries of” (an animal) comes from an old Anglo-French word “espeier” meaning “to cut with a sword”.

8. Southeast Asian tongue : LAO
The Lao people are an ethnic group found mainly in Laos, but who also have a significant presence in Thailand, Cambodia and Vietnam.

11. Streisand’s “Funny Girl” co-star : SHARIF
Omar Sharif is the great Hollywood actor from Egypt, an actor who played major roles in memorable movies such as “Doctor Zhivago” and “Lawrence of Arabia”. But to me he is my bridge hero (the card game). In his heyday Sharif was one of the best bridge players in the world.

13. Cathedral features : APSES
The apse of a church or cathedral is a semicircular recess in an outer wall, usually with a half-dome as a roof and often where there resides an altar. Originally apses were used as burial places for the clergy and also for storage of important relics.

18. Land in a nautical adventure : NED
Ned Land was one of the protagonists in Jules Verne’s classic “20,000 Leagues Under the Sea”. In the famous movie adaptation from 1955, Ned Land was played by Kirk Douglas.

22. Plot-heavy comedies : FARCES
A “farce” is a comedy play that features an exaggerated and improbable storyline, with lots of physical humor. I love a good farce …

24. Cattle drive destination in “Lonesome Dove” : MONTANA
“Lonesome Dove” is a Pulitzer-winning western novel by Larry McMurtry, first published in 1985. The novel was originally written as a screenplay for a feature film that never made it to the screen called “The Streets of Laredo”. The movie fell through because John Wayne pulled out of the project, whereas co-stars James Stewart and Henry Fonda were all set to go.

28. Food that Esau sold his birthright for : LENTIL SOUP
Esau was the twin brother of Jacob, the founder of the Israelites. When their mother Rebekah gave birth to the twins “the first emerged red and hairy all over (Esau), with his heel grasped by the hand of the second to come out (Jacob)”. As Esau was the first born, he was entitled to inherit his father’s wealth (it was his “birthright”). Instead, Esau sold his birthright to Jacob for the price of a “mess of pottage” (a meal of lentils).

36. Popular name in cosmetics : LANCOME
Lancôme Paris is a brand of makeup. Founded in 1935, the name Lancôme comes from the name of an old French castle, the Château de Lancosme.

42. Khaki : TAN
“Khaki” is an Urdu word, translating literally as “dusty”. The word was adopted for its current use as the name of a fabric by the British cavalry in India in the mid-1800s.

49. Dogpatch yell : GIT!
The cartoonist Al Capp set his classic comic strip “Li’l Abner” in the fictional community of “Dogpatch”. According to one of the “Li’l Abner” strips, Dogpatch was located somewhere in the state of Kentucky.