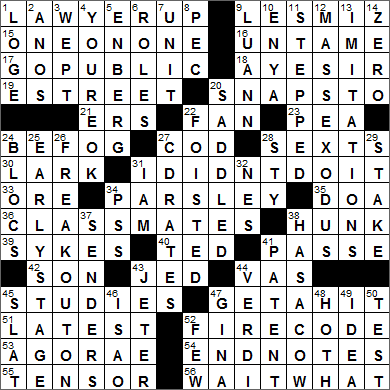 Today’s Wiki-est, Amazonian Googlies
Across
9. 1987 B’way smash : LES MIZ
The 1980 musical “Les Misérables” is an adaptation of the 1862 novel of the same name by Victor Hugo. The show opened in London in 1985, and is the longest running musical in the history of London’s West End. My wife and I saw “Les Miz” in the Queen’s Theatre in London quite a few years ago, but were only able to get tickets in the very back row. The old theater’s seating is very steep, so the back row of the balcony is extremely high over the stage. One of the big events in the storyline is the building of a street barricade over which the rebels fight. At the height we were seated we could see the stagehands behind the barricade, sitting drinking Coke, even smoking cigarettes. On cue, the stagehands would get up and catch a dropped rifle, or an actor that had been shot. It was pretty comical. I didn’t really enjoy the show that much, to be honest. Some great songs, but the musical version of the storyline just didn’t seem to hang together for me.

19. Locale of the American Red Cross headquarters in Washington : E STREET
Clara Barton was deeply disturbed by her experiences caring for the wounded during the Civil War. She dedicated herself after the war towards American recognition of the International Committee of the Red Cross. The American Red Cross was inevitably formed, in 1881, and Barton was installed as its first president.

24. Obfuscate : BEFOG
“To obfuscate” is to make something unclear, a word derived from the Latin “obfuscare” meaning “to darken”.

27. Cousin of a pollock : COD
In the British Isles, the most common fish that is used in traditional “fish and chips” is Atlantic cod. Cod has been overfished all over the world, and is now considered to be an endangered species by many international bodies. Confrontations over fishing rights in the North Atlantic led to conflicts called “the Cod Wars” between Iceland and the UK in the 1950s and the 1970s, with fishing fleets being protected by naval vessels and even shots being fired.

28. Barely communicates on a smartphone? : SEXTS
“Sexting” (a portmanteau of “sex” and “texting”) is the sending of explicit dialog and images between cell phones. The term “sexting” was first coined by the UK’s “Sunday Telegraph Magazine” in a 2005 article. Apparently the practice is “rampant” among teens and young adults. Whatever happened to dinner and a movie …?

34. Chimichurri ingredient : PARSLEY
The original recipe for the green sauce called chimichurri comes from the Rio de la Plata area in Argentina. The ingredients are chopped parsley, minced garlic, olive oil, oregano and white vinegar. It’s not really clear how the sauce got its name.

38. Many a bachelorette party hiree : HUNK
I know, they’re always calling me …

39. Star of the sitcom “Wanda at Large” : SYKES
Wanda Sykes is a very successful American comedienne and comic actress. Interestingly, Sykes spent her first five years out of school working for the NSA. I saw her perform in Reno not that long ago, and she is very, very funny.

40. ___ talk : TED
The acronym TED stands for Technology Entertainment and Design. TED is a set of conferences held around the world by a non-profit group called the Sapling Foundation. The conference subjects are varied, and the meetings are often led by big names such as Bill Clinton, Al Gore, Bill Gates and Jane Goodall. The Sapling Foundation then makes recordings of the conferences available for free online with the intent of disseminating the ideas globally. These conferences are known as “TED talks”.

43. Leo’s advisee on “The West Wing” : JED
In the excellent television show “The West Wing”, President Jed Bartlet is played by Martin Sheen. Leo McGarry was played very ably by John Spencer. If you haven’t seen them, the early seasons of “The West Wing” are just fabulous. I learned so much about the workings of the American government through this TV show.

53. Classical squares : AGORAE
In early Greece the “agora” was a place of assembly. Often the assemblies held there were quite formal, perhaps for the reading of a proclamation. Later in Greek history, things became less formal as the agora evolved into a market place. Our contemporary word “agoraphobia” comes from these agorae, in the sense that an agoraphobe has a fear of open spaces, a fear of “public meeting places”.

55. Stretching muscle : TENSOR
A tensor muscle is one that tightens or stretches a part of the body.

2. A long time in Barcelona : ANOS
In Spanish, there are ten years (años) in a decade (una decada).

3. Experienced lacrimation : WEPT
“Lacrimation” is the secretion of tears, especially when crying really hard. The term comes from the Latin “lacrimare” meaning “to weep”.

5. Sportscaster Dick : ENBERG
Dick Enberg is a sportscaster famous for uttering the lines “Oh, my!” after particularly notable plays.

7. Fermi, for one : UNIT
The unit of distance called a fermi is pretty small, one quadrillionth of a meter, and is named after Enrico Fermi.

8. Muscle mag subject : PEC
“Pecs” is the familiar term for the chest muscle, more correctly known as the pectoralis major muscle. “Pectus” is a the Latin word for “breast, chest”.

10. “Trains and Winter Rains” singer, 2008 : ENYA
Enya’s real name is Eithne Ní Bhraonáin, which can translate from Irish into Enya Brennan. Her Donegal family (in the northwest of Ireland) formed a band called Clannad, which included Enya. In 1980 Enya launched her very successful solo career, eventually becoming Ireland’s best-selling solo musician. And … she sure does turn up a lot in crosswords!

11. Like ziggurats and some mesas : STEPPED
Ziggurats were massive, terraced, step pyramids built in the ancient Mesopotamian valley. The ziggurat-style of architecture has been used in modern buildings, with notable examples being the US Bullion Depository in Fort Knox, and the MI6 Building in London.

22. Imposed (on) : FOISTED
The word “foist”, meaning “to pass off as genuine”, comes from the Dutch word meaning “take in hand”. The original concept came from playing dice, in which one die was held surreptitiously in one hand.

24. Groups sharing views : BLOCS
“Bloc” is the French word for “block”. We use the term in English for a voting alliance.

27. Bank postings : CD RATES
A certificate of deposit (CD) is like a less-flexible and higher-paying savings account. Instead of depositing money into a savings account and earning interest periodically, one can open a CD. With a CD one deposits a minimum amount of money but must leave it there for a specified length of time. In return for committing the funds for a fixed period, one is given a higher interest rate than a savings account and can redeem that interest and the initial deposit when the term has expired. CDs are relatively low-risk investments as they are FDIC insured, just like savings accounts.

32. Maniac Mansion console, for short : NES
The Nintendo Entertainment System (NES) was sold in North America from 1985 to to 1995. The NES was the biggest selling gaming console of the era.

Maniac Mansion is an adventure video game that dates back to 1987.

34. Brief afterthoughts, in brief : PSS
One adds a PS (post scriptum, or simply “postscript”) at the end of a letter (ltr.). A second postscript is a post post scriptum, a PPS.

37. Info on cover sheets : SENDERS
One might include the sender’s name on a cover sheet, perhaps when sending a fax. I can remember the last time I sent a fax …

38. Wigs out : HAS A COW
The phrase “don’t have a cow” originated in the fifties, a variation of the older “don’t have kittens”. The concept behind the phrase is that one shouldn’t get worked up, it’s not like one is giving birth to a cow.

43. Captain Clutch of baseball : JETER
Derek Jeter played his entire professional baseball career with the New York Yankees, and was the team’s captain. Jeter is the all-time career leader for the Yankees in hits, games played, stolen bases and at bats. He is also the all-time leader in hits by a shortstop in the whole of professional baseball. Jeter’s performances in the postseason earned him the nicknames “Captain Clutch” and “Mr. November”. Jeter retired from the game in 2014.

44. One who made many Shakespeare characters sing? : VERDI
Giuseppe Verdi was an Italian composer mainly of operas who was active during the Romantic era. Equally as famous as Verdi’s operas, are arias from those operas such as “La donna è mobile” from “Rigoletto”, “The Drinking Song” from “La Traviata” and “The Chorus of the Hebrew Slaves” from “Nabucco”. Verdi was a big fan of William Shakespeare and wrote three operas based on the Bard’s plays: “Macbeth”, “Otello” and “Falstaff”.

46. Aoki of the Champions Tour : ISAO
Isao Aoki is one of Japan’s greatest golfers, now playing on the senior circuit. Aoki’s best finish in a major tournament was runner-up to Jack Nicklaus in the 1980 US Open.

The Champions Tour is a golf tour hosted by the PGA in which golfers aged 50 years or more compete.

47. Actress Carano of “Fast & Furious 6,” 2013 : GINA
Gina Carano is a former martial artist from Texas who took up acting when she retired from fighting. As one might expect, Carano tends to appear in action films.

50. Follower of alpha and beta : TEST
In the world of software development, the first tested issue of a new program is usually called the “alpha” version. Expected to have a lot of bugs that need to be fixed, the alpha release is usually distributed to a small number of testers. After reported bugs have been eliminated, the refined version is called a “beta” and is released to a wider audience, but with the program clearly labeled as “beta”. The users generally check functionality and report further bugs that are encountered. The beta version feeds into a release candidate, the version that is tested just prior to the software being sold into the market, bug-free. Yeah, right …