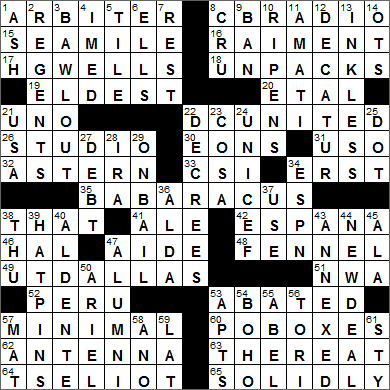 CROSSWORD SETTER: Joon Pahk
THEME: Similar Answers … there is a note with today’s puzzle:
Seven Across answers in this puzzle have a highly unusual property for which we can’t think of a single other common example. What is the property?
The seven themed answers start with two initials, with each pair of initials being beside each other in the alphabet, but reversed alphabetically in the answer:

In 1945, the FCC set aside certain radio frequencies for the personal use of citizens. The use of the Citizens’ Band increased throughout the seventies as advances in electronics brought down the size of transceivers and their cost. There aren’t many CB radios sold these days though, as they have largely been replaced by cell phones.

17. “The Invisible Man” author : HG WELLS (GH reversed)
The full name of the English author known as H. G. Wells was Herbert George Wells. Wells is particularly well known for his works of science fiction, including “The War of the Worlds”, “The Time Machine”, “The Invisible Man” and “The Island of Doctor Moreau”. He was a prolific author, and a prolific lover as well. While married to one of his former students with whom he had two sons, he also had a child with writer Amber Reeves, and another child with author Rebecca West.

21. Game with Wild Draw 4 cards : UNO
In my youth I remember being taught a great card game, by a German acquaintance of mine, called Mau Mau. Years later I discovered that Uno is basically the same game, but played with a purpose-printed deck instead of the regular deck of playing cards that’s used for Mau Mau. I hear that Mau Mau is derived from the game called Crazy Eights.

31. G.I.-entertaining grp. : USO
The United Service Organization (USO) was founded in 1941 at the request of FDR “to handle the on-leave recreation of the men in the armed forces”. A USO tour is undertaken by a troupe of entertainers, many of whom are big-name celebrities. A USO tour usually includes troop locations in combat zones.

33. “___: Cyber” : CSI
“CSI: Cyber” is the youngest show in the incredibly successful franchise of “CSI” crime dramas. I was excited to hear of the concept behind “CSI: Cyber”, but have given up watching the show after a few episodes …

35. “The A-Team” character played by Mr. T : BA BARACUS (AB reversed)
“The A-Team” is an action television series that originally ran in the eighties. The A-Team was a group of ex-US special forces personnel who became mercenaries. Star of the show was Hollywood actor George Peppard, ably assisted by Mr. T and Robert Vaughan.

42. Land bordering Francia : ESPANA
In Spanish, France (Francia) is a neighbor of Spain (España) in Europe.

48. Aromatic seasoning : FENNEL
Fennel is a hardy perennial plant species in the celery family that is used as a herb. Personally, I can’t stand fennel …

49. Educational institution near Plano, informally : UT DALLAS (TU reversed)
The University of Texas at Dallas has its main campus in Richardson, a few miles north of downtown Dallas. Prior to be being bequeathed to the state, UT Dallas was a research arm of Texas Instruments.

52. Birthplace of Paddington Bear : PERU
Paddington Bear is a character from a series of books written by Michael Bond. Paddington is an immigrant from Peru who is found sitting on his suitcase in Paddington Railway Station in London.

64. “Four Quartets” poet : TS ELIOT (ST reversed)
T. S. Eliot was awarded the Nobel Prize in Literature in 1948, largely due to his “Four Quartets”, a set of four poems that Eliot himself considered to be his life’s masterpiece.

Down
2. New York State’s ___ Examinations : REGENTS
Regents Exams are standardized test that all high school students must pass before graduation. These exams have been around for a long time, and date back to 1866.

4. Contacted via Google Talk, say : IMED
Even though instant messaging (sending IMs) has been around since the 1960s, it was AOL who popularized the term “instant message” in the eighties and nineties.

“Gchat” is a common name for the Google Talk instant messaging service. Google Talk offers both text and voice communication as well as a plugin that allows video chat. All of this works seamlessly with Gmail, my personal favorite email client. That said, much of this functionality seems to have been replaced with the Google Hangouts service.

6. Duckbill’s tail? : ELLS
There are two letters L (ells) at the tail of the word “duckbill”.

7. Note’s counterpart : REST
In music, a note might be followed by a rest.

8. Grand ___ (wine designation) : CRU
“Cru” is a term used in the French wine industry that means “growth place”. So, “cru” is the name of the location where the grapes are grown, as opposed to the name of a specific vineyard. The terms “premier cru” and “grand cru” are also used, but the usage depends on the specific wine region. Generally it is a classification awarded to specific vineyards denoting their potential for producing great wines. “Grand cru” is reserved for the very best vineyards, with “premier cru” the level just below.

11. Fine fiddle : AMATI
The first of the Amati family to make violins was Andrea Amati, who lived in the 14th century. He was succeeded by his sons, Antonio and Girolamo. In turn, they were succeeded by Girolamo’s son, Nicolo. Nicolo had a few students who achieved fame making musical instruments as well. One was his own son, Girolamo, and another was the famed Antonio Stradivari.

12. Stephen ___, War of 1812 naval hero : DECATUR
Stephen Decatur was a naval officer from Maryland who served with distinction in the US Navy in a career that included the 1812. In 1804, Decatur became the youngest captain in the history of the Navy. His career, and life, came to an untimely end when he was killed in a duel with a fellow officer in the navy.

23. ___ Nostra : COSA
Apparently “Cosa Nostra” is the real name for the Italian Mafia. “Cosa Nostra” translates as “our thing” or “this thing of ours”. The term first became public in the US when the FBI managed to turn some members of the American Mafia. The Italian authorities established that “Cosa Nostra” was also used in Sicily when they penetrated the Sicilian Mafia in the 1980s. The term “Mafia” seems to be just a literary invention that has become popular with the public.

24. International humanitarian grp. : UNICEF
The United Nations Children’s Fund is known by the acronym UNICEF because the organization’s original name when it was founded in 1946 was the United Nations International Children’s Emergency Fund. The original focus of the fund was to provide relief to children in countries that had been devastated by WWII. UNICEF is supported by contributions from governments, but also by individual donors. One of the more successful programs for collecting private donations is the Trick-or-Treat UNICEF box that has been a tradition here in North America since 1950.

28. Lyricist Gershwin : IRA
Ira Gershwin was a lyricist who worked with his brother George to create such American classics as the songs “I Got Rhythm” and “Someone to Watch Over Me”, as well as the opera “Porgy and Bess”. After George Gershwin died, Ira continued to create great music, working with the likes of Jerome Kern and Kurt Weill.

36. Pierce portrayer : ALDA
Hawkeye Pierce is the lead character in the “M*A*S*H” novel, movie and TV series. Hawkeye was originally portrayed by Donald Sutherland in the film, and then by Alan Alda in the television show. Pierce is the only character appearing in all 250 episodes of the groundbreaking TV series.

38. Election Day in the U.K. : THU
There are several theories about how election day in the UK came to be Thursday. One is that Thursday is a traditional market day in many towns around the country, so much of the rural population would be in town and available to vote.

39. Milliners’ accessories : HATPINS
A milliner is someone who makes, designs or sells hats. Back in the 1500s, the term described someone who sold hats made in Milan, Italy, hence the name “milliner”.

40. Somewhat firm : AL DENTE
The Italian expression “al dente” literally means “to the tooth” or “to the bite” and is used to describe not only pasta, but also vegetables that are cooked so that they are tender yet still crisp.

44. Noted recovery program : NEW DEAL
The New Deal was the series of economic programs championed by President Franklin D. Roosevelt in response to the Great Depression. The New Deal was focused on three objectives, the “3 Rs”:

“Selma” is a 2014 film about the Selma to Montgomery voting rights marches of 1965. The film stars British actors David Oyewale as Dr. Martin Luther King, Jr. and Tom Wilkinson as President Lyndon Johnson. “Selma” was received extremely well by critics and audiences alike. That said, there is some criticism about the way President Johnson is portrayed as being less supportive of civil rights than is assumed to be the case in reality.

50. Prince Eric’s love : ARIEL
“The Little Mermaid” is a 1989 animated feature from Disney that is based on the Hans Christian Andersen fairy tale of the same name. It tells the story of a mermaid princess named Ariel who falls in love with the human Prince Eric. Ariel’s father is chief merman King Triton.

53. Flats: Abbr. : APTS
“Flat” is a word more commonly used in the British Isles than here. A flat is basically an apartment or condominium. The word “flat” is Scottish in origin, in which language it meant a “floor in a house”.

54. ___-chic (fashion style) : BOHO
Boho-chic is a style of fashion that grew out of the bohemian and hippie looks.

55. Genesis son : ABEL
According to the Bible, Adam and Eve had several children, although only the first three are mentioned by name: Cain, Abel and Seth.

56. Singer Amos : TORI
Tori Amos is an American pianist and singer. Amos started playing the piano at two years old, and was composing piano pieces by age five. She was playing in piano bars (chaperoned by her father) when she was 14. I’m going to have to find some of her music (I lead such a sheltered life …)!