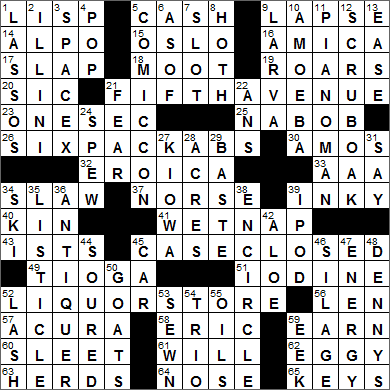 CROSSWORD SETTER: Joel Fagliano
THEME: Liquor Store Purchases … each of today’s themed answers starts with an amount of alcohol one might purchase in a LIQUOR STORE:

Today’s Wiki-est, Amazonian Googlies
Across
14. Dog food brand : ALPO
Alpo is a brand of dog food first produced by Allen Products in 1936, with “Alpo” being an abbreviation for “Allen Products”. Lorne Greene used to push Alpo in television spots, as did Ed McMahon and Garfield the Cat, would you believe?

15. European capital on a fjord : OSLO
Oslo is the capital of Norway. The city of Oslo burns trash to fuel half of its buildings, including all of its schools. The problem faced by the city is that it doesn’t generate enough trash. So, Oslo imports trash from Sweden, England and Ireland, and is now looking to import some American trash too.

17. Sound of a high-five : SLAP
The celebratory gesture that we call a “high-five” is said to have been invented by former baseball players Dusty Baker and Glenn Burke when they were both playing for the Los Angeles Dodgers in the later 1970s.

20. Bracketed word in a quote : SIC
“Sic” indicates that a quotation is written as originally found, perhaps including a typo. “Sic” is Latin for “thus, like this”. The term is more completely written as “sic erat scriptum”, which translates as “thus was it written”.

21. Fashionable shopping area in New York City : FIFTH AVENUE
Fifth Avenue in New York is sometimes referred to as the “most expensive street in the world” as the section that runs through Midtown Manhattan is home to upscale stores such as Saks Fifth Avenue.

32. Symphony that premiered 4/7/1805 : EROICA
Beethoven originally dedicated his Symphony No. 3 to Napoleon Bonaparte. Beethoven admired the principles of the French Revolution and as such respected Bonaparte who was “born” out of the uprising. When Napoleon declared himself Emperor, Beethoven (and much of Europe) saw this as a betrayal to the ideals of the revolution so he changed the name of his new symphony from “Bonaparte” to “Eroica”, meaning “heroic” or “valiant”.

34. Barbecue side dish : SLAW
The term “coleslaw” is an Anglicized version of the Dutch name “koolsla”, which in itself is a shortened form of “Koolsalade” meaning “cabbage salad”.

41. Moist towelette : WET NAP
“Wet nap” is a term commonly used for a “wet wipe”, a manufactured paper tissues that comes pre-moistened. They are often provided after a meal at some restaurants after a finger-food dish, or perhaps as a refresher on an airplane. I think the “nap” is short of “napkin”.

51. First-aid kit supply : IODINE
Tincture of iodine is a disinfectant. A “tincture” is a substance used in dyeing. Since the 1600s, “tincture” has also been used for a solution of medicine in an alcohol mixture.

56. Dawson who played in Super Bowl I : LEN
Len Dawson is a retired AFL-NFL quarterback who played for the Kansas City Chiefs (originally the Dallas Texans).

57. 45-Down from Japan : ACURA
(45D. See 57-Across : CAR)
Acura is a division of the Honda Motor Company, their luxury brand. As an aside, Infiniti is the equivalent luxury brand for the Nissan Motor Company, and Lexus is the more luxurious version of Toyota’s models.

60. Ugly weather : SLEET
Apparently “sleet” is a term used to describe two weather conditions. One is a shower of ice pellets, smaller than hail, and the second is a mixture of rain and snow, with the snow melting as it falls. It’s the second definition that I have always used …

64. Missing part of the Great Sphinx of Giza : NOSE
In Greek mythology, the creature known as the Sphinx has the body of a lion, the wings of a bird and the face of a woman. The Sphinx threatened to strangle and devour any person who could not answer a famous riddle: “Which creature walks on four legs in the morning, two legs in the afternoon, and three legs in the evening?” Oedipus was able to save himself by answering correctly “Man”. The idea is that a man crawls on all fours as a baby, and then walks on two feet as an adult, and walks with a cane in old age. “Sphinx” is actually a Greek word, meaning “the strangler” …

Down
1. Gets in the loop? : LASSOS
Our English word “lasso” comes from the Spanish “lazo”, and ultimately from the Latin “laqueum” meaning “noose, snare”.

2. “Fighting” Big Ten team : ILLINI
The Illini (or “the Fighting Illini”) is the name given to the athletic teams and marching band of the University of Illinois at Urbana-Champaign. The name Illinois is a French name that was given to the people who lived in the area (called Illiniwek).

3. Private-sector rocket launcher : SPACEX
SpaceX (Space Exploration Technologies Corporation) is a space transportation company that was founded in 2002 by Elon Musk, veteran of PayPal and Tesla Motors. In 2012, SpaceX became the first private concern to send a spacecraft to the International Space Station. Apparently, SpaceX are the lowest-price player in the game.

9. Grub vis-à-vis a beetle : LARVA
The larvae of stag beetles are commonly known as grubs, and the pupa known as the chrysalis.

10. Blob that divides : AMOEBA
An ameba (or “amoeba” as we spell it back in Ireland) is a single-celled microorganism. The name comes from the Greek “amoibe”, meaning change. The name is quite apt, as the cell changes shape readily as the ameba moves, eats and reproduces.

11. 1974 hit that begins “It’s nine o’clock on a Saturday” : PIANO MAN
“Piano Man” is a great 1973 song released by Billy Joel, his first ever single. The song reflects Joel’s own experiences working a piano-lounge singer in a Los Angeles bar called the Executive Room. The lyrics mention a “waitress practicing politics”, which is a reference to Elizabeth Weber who worked at the Executive Room and was Joel’s first wife.

Billy Joel is the third-best selling solo artist in the US, after Elvis Presley and Garth Brooks. Joel’s name has been associated with two supermodels in his life. He dated Elle Macpherson, and wrote two songs about their relationship: “This Night” and “And So It Goes”. Joel’s second wife was Christie Brinkley, to whom he was married from 1985 to 1994. Brinkley appeared in the title role in the music video for “Uptown Girl”.

27. Great Plains tribe : KIOWA
The Kiowa Native Americans have a name that means “Principal People”. Most of the Kiowas today live on a reservation in southwestern Oklahoma.

28. There are about 14,500 in Manhattan : ACRES
The island we know as Manhattan was inhabited by the Lenape Indians when the first Europeans explorers arrived in the area. According to the logbook of one of the officers on explorer Henry Hudson’s yacht, the island was called “Manna-hata” in the local language, from which the modern name derives.

35. “21 Pictures That Will Restore Your Faith in Humanity,” e.g. : LISTICLE
A “listicle” is a form of writing used by some journalist and bloggers that is basically a list, but which is fleshed out with extra information for each list item. Typically, listicles have title such as “10 Ways to …”, “The 100 best …” or “The 10 Most …” The term “listicle” is a portmanteau of “list” and “article”.

46. Livestock feed : SILAGE
Silage is animal fodder that has fermented.

48. IHOP competitor : DENNY’S
Denny’s was the first restaurant I ate at on my initial visit to the US over 30 years ago. I thought I was in heaven. I’ve changed my opinion a little since then! Denny’s is famous for being “always open” (almost), something that blew my mind as a visitor from Ireland back in 1980. Denny’s was founded in 1953 in Lakewood, California, and originally went by the name “Denny’s Donuts”.

50. Their hair makes cashmere : GOATS
Cashmere wool comes from not only the Cashmere goat, but also from other types of goat. Technically, cashmere isn’t really a wool, but rather a hair. Unlike hair, wool is elastic and grows in clusters.

54. “Jeopardy!” contestants, e.g. : TRIO
The word is that Alex Trebek will step down as host of the game show “Jeopardy” in 2016, when his current contract expires. The list of names mentioned to replace Trebek includes Brian Williams, Dan Patrick, Matt Lauer and Anderson Cooper. I vote for Cooper, but I can’t see him taking the job …

59. Exclamation while jumping on a chair, say : EEK!
At seeing a mouse, one might scream out “Eek!”, and then jump on a chair.