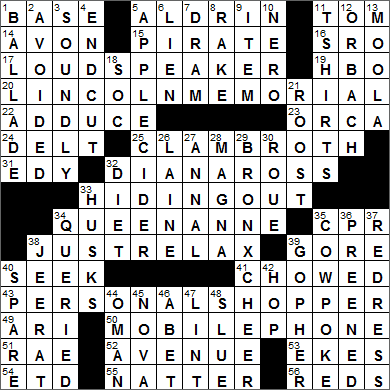 Today’s Wiki-est, Amazonian Googlies
Across
1. Place to lead a private life? : BASE
Privates often live on a military base.

5. Armstrong contemporary : ALDRIN
Buzz Aldrin is a true American hero, I’d say. He flew 66 combat missions in Korea, shot down two MiGs, earned his Sc. D. degree from MIT, and was one of the two men who landed on the moon for the first time. Now that man, he has lived a life worth living.

Neil Armstrong was the most private of individuals. You didn’t often see him giving interviews, unlike so many of the more approachable astronauts of the Apollo space program. His famous, “That’s one small step for (a) man, one giant leap for mankind” statement; that was something that he came up with himself while Apollo 11 was making its way to the moon.

“The Great Gatsby” is the 1925 novel by F. Scott Fitzgerald, that tells of the prosperous life of Jay Gatsby during the Roaring 20s. Gatsby develops an obsessive love for Daisy Fay Buchanan, a girl he met while serving during WWI, and meets again some years later after he has improved his social standing.

14. Call girl employer? : AVON
In 1886, a young man called David McConnell was selling books door-to-door. To enhance his sales numbers he was giving out free perfume to the ladies of the houses that he visited. Seeing as his perfume was more popular than his books, he founded the California Perfume Company in New York City and started manufacturing and selling across the country. The company name was changed to Avon in 1939, and the famous “Avon Calling” marketing campaign was launched in 1954.

19. Where to find “Girls” : HBO
“Girls” is an HBO comedy-drama series that was created by and stars Lena Dunham. The show follows a group of female friends living their lives in New York City. Good show …

20. Backing for some U.S. currency? : LINCOLN MEMORIAL
The Lincoln Memorial is my favorite place to visit in the whole of Washington D.C. The memorial was designed by Henry Bacon, and the sculptor of the magnificent statue of President Lincoln was Daniel Chester French. I spent a wonderful afternoon a few years ago touring the workshop and home of French, in Stockbridge, Massachusetts. The workshop is stunning, with miniature studies for his magnus opus, the Lincoln Statue, as well as many other beautiful works.

22. Cite as evidence : ADDUCE
“To adduce” is to cite as an example or as a means of proof.

23. Sea menace : ORCA
The taxonomic name for the killer whale is Orcinus orca. The use of the name “orca”, rather than “killer whale”, is becoming more and more common. The Latin word “Orcinus” means “belonging to Orcus”, with Orcus being the name for the Kingdom of the Dead.

24. Upper body muscle, for short : DELT
The deltoid muscle is actually a group of muscles, the ones that cover the shoulder and create the roundness under the skin. The deltoids are triangular in shape resembling the Greek letter delta, hence the name.

31. Eponym in the frozen food aisle : EDY
Dreyer’s ice cream sells its products under the name Dreyers in the Western United States, and Edy’s in the Eastern states. The company’s founders were William Dryer and Joseph Edy.

32. Supreme leader? : DIANA ROSS
The Supremes were the most successful vocal group in US history, based on number one hits. The group started out in 1959 as a four-member lineup called the Primettes. The name was changed to the Supremes in 1961. One member dropped out in 1962, leaving the Supremes as a trio. Lead singer Diana Ross began to garner much of the attention, which eventually led to a further name change, to Diana Ross & the Supremes.

34. English monarch after whom a brickwork building style is named : QUEEN ANNE
Queen Anne was the last of the Stuarts to rule in the British Isles, and the first sovereign of the Kingdom of Great Britain (after England and Scotland united).

The YMCA (The “Y”) is a worldwide movement that has its roots in London, England. There, in 1844, the Young Men’s Christian Association (YMCA) was founded with the intent of promoting Christian principles through the development of “a healthy spirit, mind and body”. The founder, George Williams, saw the need to create YMCA facilities for young men who were flocking to the cities as the Industrial Revolution flourished. He saw that these men were frequenting taverns and brothels, and wanted to offer a more wholesome alternative.

49. N.L. West team, on scoreboards : ARI
The Arizona Diamondbacks joined Major League Baseball’s National League in 1998. By winning the World Series in 2001, the Diamondbacks became the fastest expansion team to do so in Major League history.

51. Singer Carly ___ Jepsen : RAE
Carly Rae Jepsen is a singer/songwriter from Mission, British Columbia. Jepsen got her start on TV’s “Canadian Idol” when she placed third in the show’s fifth season.

52. States in Monopoly, e.g. : AVENUE
States Avenue is a property in the game of Monopoly. It is one of the pink properties, along with St. Charles Place. The street names in the US version of Monopoly are locations in or around Atlantic City, New Jersey.

56. Cabs and such : REDS
The Cabernet Sauvignon grape has been around since the 17th century, and is the result of a chance crossing in southwestern France of the Cabernet franc and Sauvignon blanc grapes.

Down
1. Verse with an envoi : BALLADE
An envoy (also “envoi”) is a short closing stanza in some works of poetry.

6. Security measure : LIEN
A lien is the right that one has to retain or secure someone’s property until a debt is paid. When an individual takes out a car loan, for example, the lending bank is usually a lien holder. The bank releases the lien on the car when the loan is paid in full.

8. Playboy : RAKE
A “rake” (short for “rakehell”) is defined as a man who is habituated to immoral conduct (isn’t it always the man??!!). The rake is a character who turns up frequently in novels and films, only interested in wine, women and song and not accepting the responsibilities of life. Good examples would be Wickham in Jane Austen’s “Pride and Prejudice” and Daniel Cleaver (the Hugh Grant part) in the movie “Bridget Jones’s Diary”. “Rake” comes from the Old Norse “reikall”, meaning “vagrant or a wanderer”.

9. Two people in People, maybe : ITEM
An unmarried couple known to be involved with each other might appear in the gossip columns. This appearance as “an item” in the papers, led to the use of “item” to refer to such a couple, but only since the very early seventies.

10. Emperor who committed matricide : NERO
The Roman emperor Nero had quite the family life. When Nero was just 16-years-old he married his stepsister, Claudia Octavia. He also had his mother and step-brother executed.

12. Jerry of “Dirty Dancing” : ORBACH
Jerry Orbach was an American actor, noted for playing one of the lead detectives in “Law & Order” on television. Orbach also provided the voice for the character Lumière in the Disney feature “Beauty and the Beast”. He had an important role in the great movie “Dirty Dancing”, playing Dr. Jake Houseman, Baby’s father.

The celebrated 1987 film “Dirty Dancing” stars Patrick Swayze and Jennifer Gray, who were two relative unknowns at that time of filming. “Dirty Dancing” had a relatively low budget but was destined to earn over $200 million. It became the first movie to sell more than a million copies on home video. There was a prequel made in 2004 called “Dirty Dancing: Havana Nights”, that wasn’t a good film at all. Patrick Swayze was paid $200,000 for his 1987 performance, and received $5 million to make a cameo in the prequel.

26. Frankie whose song “That Lucky Old Sun” topped the charts for eight weeks : LAINE
The singer Frankie Laine was known for singing the theme songs from Western movies and shows, although he wasn’t a country & western singer. Laine released a version of the theme for “High Noon” for example, and “Champion the Wonder Horse”, and they became bigger hits than the originals.

27. Record book record : ANNAL
“Annal” is a rarely used word, the singular of the more common “annals”. An annal would be the recorded events of one year, with annals being the chronological record of events in successive years. The term “annal” comes from the Latin “annus” meaning “year”.

29. Show of disrespect : BRONX CHEER
Not so much here in America, but over in the British Isles “blowing a raspberry” is a way of insulting someone (I think it’s called “a Bronx cheer” in the US). The verb “to razz” comes from a shortened form of “raspberry”.

30. Playboy : ROUE
“Roue” is a lovely word, I think, describing a less than lovely man. A roue could otherwise be described as a cad, someone of loose morals. “Roue” comes from the French word “rouer” meaning “to break on a wheel”. This describes the ancient form of capital punishment where a poor soul was lashed to a wheel and then beaten to death with cudgels and bars. I guess the suggestion is that a roue, with his loose morals, deserves such a punishment.

35. Range figure : COWPOKE
Cowpoke is a term used nowadays for any cowboy, but it was originally limited to the cowboys who prodded cattle onto railroad cars using long poles.

36. Combed, coxcomb-style : PREENED
A coxcomb is a bit of a fop or a dandy. The term comes from “cockscomb”, the comb or crest sported by a cockerel.

45. Deli item that’s 14-Across backward : NOVA
Nova lox is salmon that has been cured with a mild brine and then cold-smoked. The term originally applied to salmon from Nova Scotia.

46. Assist with a job : ABET
The word “abet” comes into English from the Old French “abeter” meaning “to bait” or “to harass with dogs” (it literally means “to make bite”). This sense of encouraging something bad to happen morphed into our modern usage of “abet” meaning to aid or encourage someone in a crime.