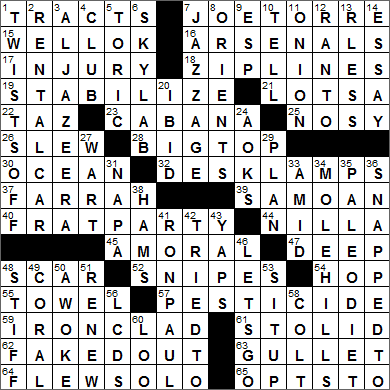 Today’s Wiki-est, Amazonian Googlies
Across
7. “The Yankee Years” co-author : JOE TORRE
As a manager, Joe Torre was part of four World Series wins, all of them with the New York Yankees baseball team. Torre is an Italian American who was born in Brooklyn, New York. During the run up (pun intended!) to the 2006 Winter Olympics in Turin, Torre carried the Olympic flame part of the way through Florence in Italy, handing it over to the next runner at the famous Ponte Vecchio. I’d guess that was quite a thrill for him …

16. Mutineers’ targets : ARSENALS
Our word “arsenal” comes from the Italian “arzenale”, a work adapted from the Arabic for “workshop”. There was a large wharf in Venice called the Arzenale that became associated with the storage of weapons and ammunition, and this led to our contemporary usage of “arsenal”.

22. Animated devil : TAZ
The “Looney Tunes” character known as the Tasmanian Devil, or “Taz”, first appeared on screens in 1964 but gained real popularity in the 1990s.

The carnivorous marsupial known as the Tasmanian devil is aptly named, in the sense that the only place the animal is found in the wild is on the island of Tasmania. The “little devils” are about the size of a small dog, and they have the strongest bite for their size of any known mammal.

23. Poolside sight : CABANA
Our word “cabana” comes from the Spanish “cabaña”, the word for a small hut or a cabin.

28. Trapeze act venue : BIG TOP
The circus act known as the “trapeze” is so called because the shape defined by the crossbar, ropes and ceiling of the tent is a “trapezium”.

37. Best-selling 1970s poster subject, familiarly : FARRAH
Farrah Fawcett’s first big role was that of Jill Monroe, one of the famous “Charlie’s Angels”. Fawcett’s life off-screen was just as celebrated as her performances on television. Fawcett was married to actor Lee Majors (“The Six Million Dollar Man”) for nine years, and then spent fifteen years with actor Ryan O’Neal.

39. Language in which the first six counting numbers are tasi, lua, tolu, fa, lima and ono : SAMOAN
The official name for the South Pacific country formerly known as Western Samoa is the Independent State of Samoa. “Samoa” is the western part of the island group, with American Samoa lying to the southeast. The whole group of islands used to be known as Navigators Island, a name given by European explorers in recognition of the seafaring skills of the native Samoans.

40. Event that one might rush to attend? : FRAT PARTY
A “rush” is a drive by a fraternity or sorority to recruit new members on campus.

44. Cookie brand : NILLA
As one might expect, Nilla is a shortened from of “vanilla”. However, you won’t find any vanilla in Nilla cookies or wafers. They have always been flavored with vanillin, which is synthetic vanilla. Is nothing sacred …?

45. Like Gordon Gekko in “Wall Street” : AMORAL
The business strategy known as “corporate raiding” really is pretty ruthless and short sighted (excuse my being judgmental). The idea is to buy a large interest in a corporation, sometimes “stealthily”, by buying up a significant number of voting shares. Then, the raider uses the power of the voting rights to convince other voters to change the way the company is run, purely to increase the share price in the relatively short term. The changes often involve replacement of the management team, downsizing and even liquidation of the company, all for short term, personal gain. Corporate raider, Gordon Gekko said in the 1987 movie “Wall Street”, “greed is good”, but I wonder is he right?

48. Arthroscopy reminder : SCAR
“Arthroscopy” is surgery that is minimally invasive and is performed on a joint, often the knee, hip or shoulder.

63. Food channel : GULLET
The esophagus is the gullet, the “pipe” that carries food from the mouth down into the stomach. The term comes from the Greek “oisophagos” that can be translated as “to carry to eat”.

Down
2. Thrifty selection : RENTAL CAR
Thrifty Car Rental was founded back in 1958. Thrifty became part of Chrysler in 1989 and was merged by Chrysler with Dollar Rent A Car the following year.

3. Its English offshoot launched in 2006 : AL JAZEERA
Al Jazeera is an independent news service owned by the state of Qatar. Since 2006, Al Jazeera has been broadcasting an English language channel, hiring many top journalists from American news outlets. “Al jazeera” is Arabic for “the island”.

4. Neanderthal accompanier, in cartoons : CLUB
The Homo genus includes the species Homo sapiens (modern humans), but we’re the only species left in that genus. The last known species related to humans was Homo neanderthalensis (Neanderthal Man) which died off about 24,000 years ago. However, another species was discovered in Indonesia in 2003 that has been dubbed Homo floresiensis (Flores Man … sometimes called “hobbit”), and it may possibly have lived as recently as 12,000 years ago. Watch this space …

5. Like bagels : TORIC
The bagel was invented in the Polish city of Kraków in the 16th century. Bagels were brought to this country by Jewish immigrants from Poland who mainly established homes in and around New York City.

6. The orbital workshop was its largest component : SKYLAB
Skylab was sent into orbit by NASA in 1973 and continued to circle the Earth there until 1979. Although it was in orbit for many years, Skylab was only occupied by astronauts for 171 days, in three missions in 1973-1974. Skylab burned up in the Earth’s atmosphere a lot earlier than expected, showering some huge chunks of debris on our friends in Australia.

10. Hold ’em giveaway : TELL
The official birthplace of the incredibly popular poker game of Texas Hold ‘Em is Robstown, Texas where the game dates back to the early 1900s. The game was introduced into Las Vegas in 1967 by a group of Texan enthusiasts including Doyle Brunson, a champion often seen playing on TV today. Doyle Brunson published a poker strategy guide in 1978, and this really helped increase the popularity of the game. But it was the inclusion of Texas Hold ‘Em in the television line-up that really gave the game its explosive surge in popularity, with the size of the prize money just skyrocketing.

13. Like inopportune months to eat oysters : R-LESS
There is a traditional warning that one shouldn’t eat shellfish in a month without an R i.e. May through August. That’s because these are the warmer months here in the northern hemisphere when algae blooms can spread toxins that are soaked up by clams, mussels and oysters. Personally, I only eat shellfish in months containing a Q … that would be never …

14. Salon offering : ESSAY
Salon.com is a popular online magazine, one of the first “ezines” ever published. “Salon” focuses on American politics and current affairs, but also has articles about books, music and films. The magazine was launched in 1995, and managed to survive many loss-making years. Most of “Salon’s” content is free, but it does make money by offering a premium service with extra content, and by selling ad space.

20. Reference notation : IBID
Ibid. is short for the Latin word “ibidem” and is typically found in footnotes and bibliographies. Ibid. is used to refer the reader to the prior citation, instead of giving the same information all over again (title, author etc.).

24. Breezy assents : A-OKS
Our term “A-OK” is supposedly an abbreviation for “A(ll systems are) OK”, and arose in the sixties during the Space Program.

William Scholl worked part time as a cobbler and then in a shoe retailer in Chicago. Noting that many people had similar foot problems he went to night school and qualified as a podiatrist in 1904. Soon after he started his own company making footcare products, giving us the brand name Dr. Scholl’s.

31. Major region for viticulture : NAPA
The first commercial winery in Napa Valley, California was established way back in 1858. However, premium wine production only dates back to the 1960s, with the region really hitting the big time after its success at the Paris Wine Tasting of 1976. The story of that famous blind wine tasting is told in the entertaining 2008 film “Bottle Shock”.

34. Problems that may get overblown : MOLEHILLS
Don’t make a mountain out of a molehill …

35. Old/new food regimen : PALEO DIET
The paleolithic or caveman diet is a fad diet that became popular in the 2000s. The idea is to eat wild plants and animals that would have been available to humans during the Paleolithic era (roughly the Stone Age). This period precedes the introduction of agriculture and domestication of animals. As a result, someone on the diet avoids consuming grains, legumes, dairy and processed foods. The diet consists mainly of lean meat (about 45-65% of the total calorie intake), non-starchy vegetables, fruits, berries and nuts.

38. They lack subtlety : HAMS
The word “ham”, describing a performer who overacts, is apparently a shortened form of “hamfatter” and dates back to the late 1800s. “Hamfatter” comes from a song in old minstrel shows called “The Ham-Fat Man”. It seems that a poorly performing actor was deemed to have the “acting” qualities of a minstrel made up in blackface.

41. Name in the news that’s an anagram of OUR PLAN : RON PAUL
Ron Paul is a celebrated Republican Congressman from Texas. Paul is a libertarian, and actually ran for president in 1988 as a Libertarian Party candidate. He ran for the Republican nomination for President in 2008 as a member of the Liberty Caucus of the party, meaning that he values a federal government that is limited in size and scope.

48. Not pay what’s due : STIFF
The etymology of our verb “to stiff”, meaning “to fail to tip”, seems unclear. The usage originated in the late 1930s, and is possibly an extension of the noun “stiff” meaning “corpse”. The idea is that dead men don’t leave tips.

58. Texan’s rival : COLT
The Indianapolis Colts professional football team has been in Indiana since 1984. The team traces its roots back to the Dayton Triangles, one of the founding members of the NFL created in 1913. The Dayton Triangles relocated and became the Brooklyn Dodgers in 1930, and then the Brooklyn Tigers in 1944. The team merged with the Boston Yanks in 1945, so then played in Boston. The Yanks were moved to New York in 1949, and then to Dallas in 1952 as the Dallas Texans. The Texan franchise moved to Baltimore in 1953, forming the Colts. The Colts made their last move, to Indianapolis, in 1984. Whew!

60. Place to go in London : LOO
When I was growing up in Ireland, a “bathroom” was a room that had a bath and no toilet. The separate room with the commode was called “the toilet” or sometimes the W.C. (the water closet). Apparently the term closet was used because in the 1800s when homeowners started installing toilets indoors they often displaced clothes and linens in a “closet”, as a closet was the right size to take the commode. It has been suggested that the British term “loo” comes from Waterloo (water-closet … water-loo), but no one seems to know for sure. Another suggestion is that the term comes from the card game of “lanterloo” in which the pot was called the loo!