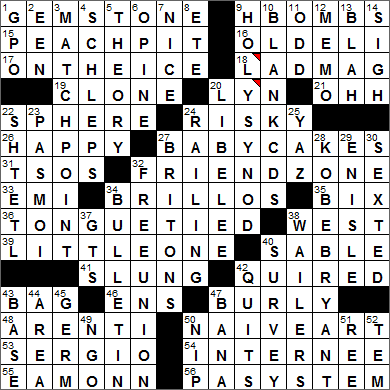 Today’s Wiki-est, Amazonian Googlies
Across
9. Big releases of the ’50s : H-BOMBS
The first test of a hydrogen bomb was in 1954 at Bikini Atoll in the Marshall Islands. It may have been a technical success but it was an environmental disaster, largely because the actual yield of 15 megatons was unexpected (the military anticipated only 4-6 megatons). The resulting nuclear fallout caused many deaths, and led to birth defects in generations to come.

15. Cobbler waste : PEACH PIT
The dessert called “cobbler” originated in colonial America when settlers invented it as a substitute for suet pudding as they didn’t have the necessary ingredients to make the more traditional dish. Instead, they stewed fruit and covered it with a layer of uncooked scones or biscuits, creating a surface that resembled a “cobbled” street, hence the name.

16. Yale, to the “ten thousand men of Harvard” : OLD ELI
Yale University in New Haven, Connecticut was founded in 1701, making it the third-oldest university in the US. Originally called the Collegiate School, it was renamed to Yale University in honor of retired merchant from London called Elihu Yale, who made generous contributions to the institution. Yale University’s nickname is “Old Eli”, in a nod to the benefactor.

“Ten Thousand Men of Harvard” is one of Harvard’s fight songs, one that was written by student A. Putnam of the class of 1918.

20. Nixon adviser Nofziger : LYN
Lyn Nofziger was a press secretary for Ronald Reagan when he was Governor of California. Nofziger was also a political advisor to the White House during the Nixon and Reagan administrations. One of Nofziger’s legacies is that he managed to convince President Reagan to drop the program to bring metrification to the US.

24. Parlous : RISKY
“Parlous” is an old contraction of the word “perilous”, with both meaning “risky, dangerous”.

31. Possessive on a Chinese menu : TSO’S
General Tso’s chicken is an American creation, often found on the menu of a Chinese restaurant. The name General Tso may be a reference to General Zuo Zongtang of the Qing Dynasty, but there is no clear link.

33. Classic record label : EMI
EMI was a British music company, with the initialism originally standing for Electric and Musical Industries.

34. Some kitchen pads : BRILLOS
Brillo Pad is a soapy, steel wool pad, patented in 1913. The company claims that the name “Brillo” is derived from the Latin word for “bright”. The problem with the assertion is that no such word exists in Latin, although the prefix brill- is used for words meaning “bright” in Italian, French and Spanish.

35. Jazz’s Beiderbecke : BIX
Bix Beiderbecke was a jazz cornet player and composer. Beiderbecke was very influential in the world of jazz in the 1920s in particular and is said to have invented the jazz ballad style.

38. Cornel who wrote “Race Matters” : WEST
Cornel West is a philosopher, academic and activist who was the first African American to graduate Princeton with a Ph.D. in philosophy.

40. Shade of black : SABLE
Sables are small mammals about two feet long, found right across northern Europe and northern Asia. The sable’s black pelt is highly prized in the fur trade. Sable is unique among furs in that it feels smooth no matter which direction it is stroked.

42. Put in bundles for the bookbinder : QUIRED
A “quire” is a measure of paper quantity. There are usually 25 sheets in a quire, and 20 quires (500 sheets) in a ream. However, a quire sometimes only contains 15, 18 or 20 sheets, depending on the type of paper.

46. Characters of average width : ENS
In typography, there are em dashes and en dashes. The em dash is about the width of an “m” character, and an en dash about half that, the width of an “n’ character. An en dash is used, for example, to separate numbers designating a range, as in 5-10 years. Th em dash seems to be going out of style, and indeed the application I am using to write this paragraph won’t let me show you one!

53. Musician Mendes known for the bossa nova : SERGIO
Sérgio Mendes is a musician from Brazil who headed up the band Sérgio Mendes and Brasil ‘66.

55. Irish runner Coghlan : EAMONN
Eamonn Coghlan is a former middle-distance runner who is now a Senator in his native Ireland. Coghlan ran a sub-four-minute mile at the age of 22, the first Irishman to do so. He also became the first man anywhere over the age of 40 to run a mile below 4 minutes.

2. “Good-___, good fellow” (greeting from Romeo) : E’EN
William Shakespeare’s “Romeo and Juliet” is all about the love between the two title characters, which is forbidden as the pair come from two families who are sworn enemies. Early in the play, Romeo (a Montague) sneaks into a masquerade ball being held by the Capulets in the hope of meeting a Capulet girl named Rosaline. Instead, he meets and falls for Juliet, also a Capulet. Tragedy ensues …

4. Lugs : SCHLEPS
Our word “schlep” means “to carry, drag”. “Schlep” comes from Yiddish, with “shlepen” having the same meaning in that language.

7. See 8-Down : NICE
8. When 7-Down gets hot : ETE
The French city of Nice is on the Mediterranean coast in the southeast of the country. Although Nice is only the fifth most populous city in France, it is home to the busiest airport outside of Paris. That’s because of all the tourists flocking to the French Riviera.

One might spend the summer (été) under the sun (le soleil) in France.

9. Highest authority in some Eastern churches : HOLY SYNOD
Several Eastern Orthodox and Eastern Catholic Churches have ruling bodies called Holy Synods, comprising a group of bishops who elect the head bishop or patriarch for their church.

20. One who’s disparaged : LIBELEE
The word “libel”, meaning a published or written statement likely to harm a person’s reputation, comes into English from the Latin “libellus”, the word for a small book. Back in the 1500s “libel” was just a formal written statement, with the more damaging meaning arising in the 1600s.

22. “Fiddler on the Roof” setting : SHTETL
The Yiddish word for “town” is “shtot”, and so “shtetl” is the diminutive form meaning “small town”.

25. 1960s-’80s Bosox legend : YAZ
Yaz is the nickname for Carl Yastrzemski who played his whole career with the Boston Red Sox.

27. Ones symbolized by John Bull : BRITONS
John Bull is a character used in artwork to portray the country of England, much in the way that we use Uncle Sam in the United States. Bull was created by John Arbuthnot in 1712 and is a portly man dressed in a top hat and tails, often with a Union Jack pattern on his vest (or waistcoat as the Brits would say).

28. Basketball’s Black Mamba : KOBE BRYANT
Kobe Bryant plays basketball for the LA Lakers. Kobe Bryant got his name from a menu would you believe? His parents were in a Japanese restaurant and liked the name of “Kobe” beef, the beef from around the city of Kobe on the island of Honshu in Japan.

29. Maroon : ENISLE
To maroon: to enisle, to leave on an island.

30. Sent pixxx? : SEXTED
“Sexting” (a portmanteau of “sex” and “texting”) is the sending of explicit dialog and images between cell phones. The term “sexting” was first coined by the UK’s “Sunday Telegraph Magazine” in a 2005 article. Apparently the practice is “rampant” among teens and young adults. Whatever happened to dinner and a movie …?

38. Original band that sang “I Shot the Sheriff,” with “the” : WAILERS
The Bob Marley song “I Shot the Sheriff” tells of someone who killed the local sheriff. Marley wanted to say “I shot the police”, but figured the government wouldn’t like that too much. He also stated that the song is about justice.

The Wailers were the band, formed in Jamaica in 1963, whose most famous member was Bob Marley. The band’s name went through a few iterations, starting out as the Teenagers, then the Wailing Rudeboys, the Wailing Wailers, and finally simply the Wailers.

“Family Feud” is an American game show that has been remade in countries all over the world. We even make a version in Ireland that we call “Family Fortunes”.

43. Plinth, for a pillar : BASE
A plinth is a block on which a column is based. The Greek word “plinthos” means “squared stone”.

47. Eric of “Munich” : BANA
Eric Bana is an Australian actor who enjoyed a successful career in his home country before breaking into Hollywood playing an American Delta Force sergeant in “Black Hawk Down”. A couple of years later he played the lead in Ang Lee’s 2003 movie “The Hulk”, the role of Dr Bruce Banner. More recently he played the Romulan villain Nero, in the 2009 “Star Trek” movie.

The Cooperative for Assistance and Relief Everywhere (CARE) is a humanitarian agency that was founded in 1945 in the US as a conglomerate of twenty-two charities with the aim of delivering aid to Europe after WWII.

51. Food writer Drummond : REE
Ree Drummond is a food writer and blogger. Drummond’s blog “The Pioneer Woman” recounts her daily life on her family’s working ranch outside of Pawhuska, Oklahoma.

52. Pro ___ : TEM
“Pro tempore” can be abbreviated to “pro tem” or “p.t.” “Pro tempore” is a Latin phrase that best translates as “for the time being”. It is used to describe a person who is acting for another, usually a superior.