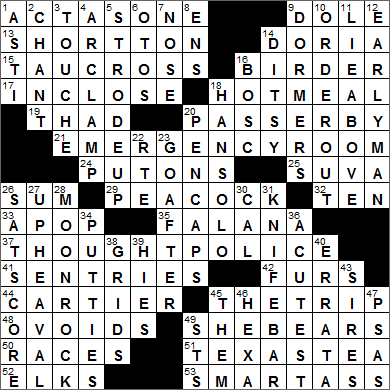 13. U.S. freight measure : SHORT TON
Here in the US, a ton is equivalent to 2,000 pounds. Over in the UK, a ton is 2,240 pounds. The UK unit is sometimes referred to as an Imperial ton or sometimes a “long ton”. Folks over there refer to the US ton then as a “short ton”. To further complicate matters, there is also a “metric ton” or “tonne”, which is equivalent to 2,204 pounds. I wish we’d just stick to kilograms …

14. Italian admiral for whom several ships were named : DORIA
The SS Andrea Doria was an Italian ocean liner with the home port of Genoa. She was named after Andrea Doria, a 16th-century admiral from the city. As always seems to be the case with ships that go down, the Andrea Doria was the pride of the fleet and was deemed to be the biggest, fastest and safest of Italy’s ships in the fifties. Her end came in 1956 when she collided with the MS Stockholm off the coast of Nantucket Island. Such was the damage to the side of the vessel that she quickly and severely listed to starboard, rendering half her lifeboats unusable. Nonetheless, 1,660 crew and passengers were rescued by vessels that came to her aid. Only 46 lives were lost, mainly in the collision itself. The Andrea Doria capsized and sank eleven hours after the collision.

15. Symbol of the Franciscan order : TAU CROSS
The Cross of Tau is a variant of the cross symbol used in the Christian tradition. Also known as St. Anthony’s Cross, the Cross of Tau resembles the Greek letter tau, and our letter T. St. Anthony of Egypt bore such a symbol on his cloak, hence the alternate name.

16. Jays’ fan, maybe : BIRDER
A “birder” is a bird watcher, an ornithologist.

26. Sigma signification : SUM
Sigma is the eighteenth letter of the Greek alphabet, and is the one used for an “ess” sound, equivalent to our letter S. Sigma is used in mathematics to represent a summation, the adding together of a sequence of numbers.

29. Recipient of Argus’s 100 eyes, in myth : PEACOCK
Argus Panoptes is a monster of Greek mythology. “Panoptes” means “all-seeing”, so over time Argus has been described as having many, many eyes. Argus was noted for being alert, always keeping some eyes open when sleeping. This characteristic led to Argus being used for a vigilant person, and has been adopted as the name for many newspapers. After Argus died, Hera transferred his eyes to the tail of the peacock.

35. Singer/actress once called the “Black Venus” : FALANA
Lola Falana is a singer, dancer and actress who grew up in Philadelphia. In the sixties Falana had an affair with, and later became good friends with, Sammy Davis Jr. Davis helped get her act into Las Vegas where she was very successful, eventually earning Falana the nickname “Queen of Las Vegas”. With her success came money, and so she became the highest paid female performer in Vegas at that time. Sadly, Falana suffers from multiple sclerosis, a disease that forced her to cut short her career as an entertainer.

37. Iconoclast stiflers : THOUGHT POLICE
The original Thought Police were a creation of the novelist George Orwell, who featured them in his 1949 novel “Nineteen Eighty-Four”. The Thought Police tracked down “thoughtcrimes” and punished “thought-criminals”, people who had thoughts about challenging authority. In modern parlance, we might label people who embrace the concept of political correctness as “thought police”.

Iconoclasm is the deliberate destruction of society’s icons, either religious or cultural. The term applies more to a rebellious action from within a society, as opposed to an act by external forces invading another culture. As such, the term “iconoclast” has come to have a broader meaning, describing anyone who stands up against established convention.

44. Longtime jeweler to royals : CARTIER
Cartier is a manufacturer of jewelry and watches based in Paris that has had a long association with royalty and the very rich. According to King Edward VII, Cartier is “the jeweller of kings and the king of jewellers” (note the English spelling of “jeweller”!).

45. Peter Fonda cult film about an acid experience : THE TRIP
“The Trip” is a 1967 movie starring Peter Fonda as man who takes his first ever dose of LSD while going through a divorce. The film basically documents the man’s experience on that first “trip”. As an aside, “The Trip” was written by famed actor Jack Nicholson.

51. Crude, in slang : TEXAS TEA
“Texas tea” is a familiar term for oil drilled from the Earth.

52. Group started as the Jolly Corks : ELKS
The Benevolent and Protective Order of Elks (BPOE) was founded in 1868, and is a social club that has about a million members today. It started out as a group of minstrel performers called the Jolly Corks getting together in a “club” in order to get around the legal opening hours of taverns in New York City. The club took on a new role as it started to look out for poor families of members who passed away. The club now accepts African Americans as members (since the seventies) and women (since the nineties), but atheists still aren’t welcome.

53. Snarky sort : SMART ASS
“Snark” is a term that was coined by Lewis Carroll in his fabulous 1876 nonsense poem “The Hunting of the Snark”. Somehow, the term “snarky” came to mean “irritable, short-tempered” in the early 1900s, and from there “snark” became “sarcastic rhetoric” at the beginning of the 21st century.

Down
1. Bubbly option : ASTI
Asti is in the Piedmont region of northwest Italy. The region is perhaps most famous for its Asti Spumante sparkling white wine.

3. Comeback to a comeback : TOUCHE
“Touché” is a term from fencing, acknowledging a successful “touch” in a duel. The term has been extended to mean that a successful criticism or riposte has hit home in a conversation.

5. Approached like John Wayne, with “to” : STRODE UP
John Wayne was called Marion Mitchell Morrison at birth, named after his grandfather who was a Civil War veteran. When young Marion was a little boy, a local fireman used to call him “Little Duke” because he was always seen walking with his large dog called “Duke”. Marion liked the name “Duke” and so he called himself Duke Morrison for the rest of his life. That said, Duke Morrison also used John Wayne as a stage name.

6. Relatives of Winnebagos : OTOS
The Otoe (also Oto) Native American tribe originated in the Great Lakes region as part of the Winnebago or Siouan tribes. The group that would become the Otoe broke away from the Winnebago and migrated southwestwards ending up in the Great Plains. In the plains the Otoe adopted a semi-nomadic lifestyle dependent on the horse, with the American bison becoming central to their diet.

9. Loft additions : DORMERS
A dormer window is a window in a dormer! A dormer is a roofed structure that protrudes from the slope of the main roof.

12. Concern of paleoanthropology : EARLY MAN
The prefix “paleo-” means “prehistoric, primitive”. It comes from the Greek word “palaios” which means “old, ancient”. The prefix “neo-” would be the opposite, meaning “new, recent”.

16. Good pear for poaching : BOSC
Bosc is a cultivar of the European Pear grown in the northwest of the United States. The Bosc is that pear with a skin the color of a potato, with a long neck. I always seem to use the potato as my point of reference. How Irish am I …?

18. Film figure who said “I take orders from just one person: me” : HAN SOLO
Han Solo is the space smuggler in “Star Wars” played by Harrison Ford. Ford was originally hired by George Lucas just to read lines for actors during auditions for “Star Wars”, but over time Lucas became convinced that Ford was right for the pivotal role of Han Solo.

26. Consideration for college admission : SAT SCORE
Today the standardized test for admission to colleges is known as the SAT Reasoning Test, but it used to be called the Scholastic Aptitude Test and Scholastic Assessment Test, which led to the initialism SAT.

27. Sturm und Drang : UPHEAVAL
“Sturm und Drang” translates from the German into “Storm and Stress” or perhaps “Storm and Impulse”. “Sturm und Drang” was the name given to a movement in German literature and music in the latter half of the 18th century. The writer Johann Goethe was a major proponent of the movement, which took its name from a play by Maximilian Klinger. The term “Sturm und Drang” has come to mean “turmoil, upheaval”.

28. Apollo collection : MOONROCK
President Kennedy famously gave the nation the goal of landing on the moon in a speech in 1961. The Mercury program had been the project that put Americans into space, and NASA decided that more development work was need to bridge the gap in capabilities needed between what was known from Mercury and what was needed to land a man on the moon, the objective of the Apollo program. So, the Gemini program was born, in which astronauts learned to spend extended periods in orbit, rendezvous and dock spacecraft, walk in space, and improve the reentry and landing stage of a space flight.

40. Slips of paper? : ERRATA
“Errata” is the past participle of the Latin word “errare” meaning “to err”. We use “errata” (singular “erratum”) to mean a list of errors that have been noted in some publication.

43. Studbook figures : SIRES
The word “stud”, meaning “a male horse kept for breeding”, is derived from the Old English word “stod”, which described a whole herd of horses.

46. Prefix related to benzene’s shape : HEXA-
Benzene is a remarkable chemical compound, from a molecular standpoint anyway. It is made up of six carbon atoms arranged in a ring, with one hydrogen atom attached to each carbon. Benzene is a significant component of gasoline, and is also very carcinogenic.

“G.I. Joe: A Real American Hero” is a cartoon series based on the Hasbro toy soldier. The show’s original run was in the 1980s. Each episode ended with a public safety lesson aimed at kids. The catchphrase used for the lessons was “… and knowing is half the battle”.