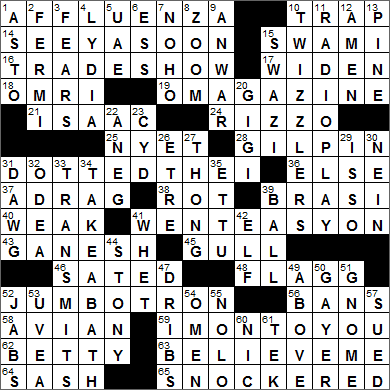 Today’s Wiki-est, Amazonian Googlies
Across
1. Woe that’s the result of extreme materialism : AFFLUENZA
“Affluenza” might be described as the obsessive pursuit of perceived wealth accompanied by debt, anxiety and waste. The term is a portmanteau of “affluent” and “influenza”.

15. Know-it-all? : SWAMI
A swami is a religious teacher in the Hindu tradition. The word “swami” can also mean “husband” in the Bengali and Malay languages.

18. King of Israel who founded Samaria : OMRI
Omri was the sixth king of Israel, and was succeeded by his son Ahab.

The ancient city of Samaria, according to the Bible, was founded by Omri, the king of the northern kingdom of Israel. Somebody from Samaria was known as a “Samaritan”.

19. Hearst publication since 2000 : O MAGAZINE
The full name of the publication usually called “O”, is “O: The Oprah Magazine”. Since the magazine’s founding in 2000, Oprah has appeared alone on the cover of each issue, with two exceptions. On the April 2009 cover Oprah was shown with First Lady Michelle Obama, and on the December 2009 cover Oprah shared the limelight with Ellen DeGeneres.

21. Singer of stories : ISAAC
Isaac Bashevis Singer was a Jewish-American author from Poland who won the Nobel Prize in Literature in 1978. His memoir “A Day of Pleasure: Stories of a a Boy Growing Up in Warsaw” won a National Book Award in children’s Literature. As well as being a much-respected author, Singer was a noted vegetarian, and featured the theme of vegetarianism in his some of his works. He was once asked if he had become a vegetarian for health reasons, to which he remarked “I did it for the health of the chicken”.

24. Hoffman’s role in “Midnight Cowboy” : RIZZO
Enrico Salvatore “Ratso” Rizzo is one of the characters in the groundbreaking 1969 movie “Midnight Cowboy”. Rizzo is a down-and-out con man, played by Dustin Hoffman.

The 1969 movie “Midnight Cowboy” is a Hollywood adaptation of a novel of the same name by James Leo Herlihy. It’s a pretty depressing story about a young Texan (played by Jon Voight) who heads to New York City to make money as a hustler, hiring himself out to women for sex. Pretty soon the young man ends up selling his body for sex with males as well. Prior to release the MPAA gave the movie an R-rating, but the United Artists studio took advice and decided to release it with an X-rating. When “Midnight Cowboy” won the Best Picture Academy Award in 1969, it became the only X-rated film to be so honored.

28. Peri of “Frasier” : GILPIN
Peri Gilpin is an actress best known for playing Roz Doyle on the hit sitcom “Frasier”. “Frasier” was a spinoff of “Cheers”, and indeed Gilpin made an appearance on the original show, albeit playing a completely different character.

38. Balderdash : ROT
“Balderdash” means “senseless jumble of words”. The original balderdash (back before the late 1600s) was a jumbled mix of liquids, like maybe beer and wine, or even beer and milk!

39. Corleone’s enforcer in “The Godfather” : BRASI
Luca Brasi is one of Don Corleone’s most loyal “enforcers” in Mario Puzo’s novel “The Godfather”. In the big screen adaptation, Luca Brasi is played by ex-wrestler and professional bodyguard Lenny Montana. The role launched a very successful television character-acting career for Montana.

45. Take in : GULL
A gull is a person who is easily tricked or cheated, a dupe. The word probably comes from the same root as “gullet”, in that a dupe will easily swallow anything you feed him.

46. Full : SATED
“Sate” is a variant of the older word “satiate”. Both terms can mean either to satisfy an appetite fully, or to eat to excess.

48. Randall ___, recurring character in Stephen King novels : FLAGG
Randall Flagg appears in several of Stephen King’s novels. Flagg is sometimes the main antagonist, but at other times he just makes a cameo appearance. I’m not a fan of the horror genre, so I’ve never bumped into the gentleman …

52. What might make you a big fan? : JUMBOTRON
A JumboTron is a big-screen television system from Sony, often seen in sports stadiums. The brand name “JumboTron” is used pretty generically now for any big-screen system in such venues, even though Sony exited the business in 2001.

58. For the birds? : AVIAN
“Avis” is the Latin word for a bird, giving rise to our adjective “avian” meaning “relating to birds”.

62. Brown ___ : BETTY
Brown Betty is a simple dessert made from apples (usually) with sweetened crumbs on top, and then baked.

64. Door part : SASH
A movable (up and down) window frame is called a sash, from the French word for a frame “châssis”. The term is also applied to that part of a door or window into which windows are set.

Down
2. Physicist who coined the word “neutrino” : FERMI
The physicist Enrico Fermi was born in Rome, Italy. Fermi moved to the US just before WWII, largely to escape the anti-Semitic feelings that were developing in Italy under Mussolini. It was Fermi’s work at the University of Chicago that led to the construction of the world’s first nuclear reactor. Fermi died at 53 years of age from stomach cancer. Cancer was a prevalent cause of death among the team working on that first nuclear pile. The synthetic element Fermium was discovered in 1952 and is named in his honor.

4. Girl’s name derived from the name of an ancient Anatolian kingdom : LYDIA
Lydia and Ionia were ancient territories in a part of the world now covered by modern-day Turkey. Both territories eventually fell under Greek and then Roman rule.

5. It’s served by Gulf Air: Abbr. : UAE
The United Arab Emirates (UAE) is a federation of seven emirates (states) in the Middle East. Included in the seven are Abu Dhabi and Dubai, with the city of Abu Dhabi being the UAE capital and cultural center.

Gulf Air is an airline based in Bahrain that was founded in 1950 as Gulf Aviation.

6. Story’s opening? : ESS
The opening letter in the word “story” is the letter S (ess).

7. Big Apple neighborhood : NOHO
NoHo is short for North of Houston (street), and is the equivalent area to SoHo, South of Houston, both in New York City.

9. ___ al-Awlaki, terrorist targeted in a 2011 American drone strike : ANWAR
Anwar al-Awlaki was an American-raised and -educated member of al-Qaeda. He graduated with an engineering degree from Colorado State University, and then became an imam. al-Awlaki even conducted a sanctioned prayer service in the US Capitol building. He left the US for the UK in 20002, and eventually settled in Yemen. He was arrested in Yemen and imprisoned from 2006 to 2007. He ended up in hiding in Yemen and in 2011 was killed by a US drone strike.

10. Sticks in a Halloween bag? : TWIZZLERS
Twizzlers candy has been produced since 1845, although back then the only flavor available was licorice. My wife is addicted to strawberry Twizzlers. Can’t stand the stuff myself …

11. 1938’s “The War of the Worlds,” e.g. : RADIO PLAY
Orson Welles starred in and directed 1938’s famous radio play “The War of the Worlds”. This adaptation of the H. G. Wells science-fiction novel included several apparent news broadcasts that reported the effects of an alien invasion. Many people who heard the broadcasts didn’t realise that they were part of a play. It is estimated that of 6 million people who tuned it, 1.2 million listeners were genuinely frightened by what they were hearing.

15. Neighbor of a Mozambican : SWAZI
The Kingdom of Swaziland is located in southern Africa and is a nation almost completely surrounded by South Africa. Swaziland is quite a small country, only 120 miles long from north to south, and 80 miles from east to west.

Mozambique is a nation in the southwest of Africa on the Indian Ocean. It was a Portuguese colony for centuries, gaining independence in 1975. The country was named for the Island of Mozambique, which lies a few miles off the coast.

20. Movie with the song “I Remember It Well” : GIGI
In the lovely musical “Gigi”, released in 1958, the title song is sung by Louis Jourdan who plays Gaston. My favorite number though, has to be “Thank Heaven for Little Girls” sung by Maurice Chevalier. Many say that “Gigi” is the last in a long line of great MGM musicals.

22. Rare blood type, for short : A-NEG
The most important grouping of blood types is the ABO system. Blood is classified as either A, B, AB or O, depending on the type of antigens on the surface of the red blood cells. A secondary designation of blood is the Rh factor, in which other antigens are labelled as either positive or negative. When a patient receives a blood transfusion, ideally the donor blood should be the same type as that of the recipient, as incompatible blood cells can be rejected. However, blood type O-neg can be accepted by recipients with all blood types, A, B, AB or O, and positive or negative. Hence someone with O-neg blood type is called a “universal donor”.

23. Charisse of “Brigadoon” : CYD
Actress Cyd Charisse was famous for her dancing ability and the many roles she played opposite Fred Astaire and Gene Kelly. Charisse carved out a career based on dance despite the fact that she suffered from polio as a child. In fact, she took up ballet at the age of twelve to help build up her strength as she recovered from the disease.

32. Some ancient halls : ODEA
In Ancient Greece an odeon (also odeum) was like a small theater, with “odeon” literally meaning a “building for musical competition”. Odea were used in both Greece and Rome for entertainments such as musical shows and poetry readings.

35. Response to an attack by a group of senators : ET TU
It was Shakespeare who popularized the words “Et tu, Brute?” (And you, Brutus?), in his play “Julius Caesar”, although the phrase had been around long before he penned his drama. It’s not known what Julius Caesar actually said in real life just before he was assassinated on the steps of the Senate in Rome.

50. More like Paree : GAYER
“Who Said Gay Paree?” is a song from the Cole Porter musical “Can-Can”.

51. Legendary guard of treasure : GNOME
In English folklore, the lovable fairy’s anti-hero is the diminutive gnome, an evil ugly character. Over the centuries, the gnome has become more lovable so we now have garden gnomes and even the Travelocity Gnome …

53. Place for an iris : UVEA
The uvea is the middle of the three layers that make up the eyeball. The outer layer is called the fibrous tunic, and the inner layer is the retina.

55. Certain plea, briefly : NOLO
“Nolo contendere” is a legal term that translates from Latin as “I do not wish to contend”. It’s the plea of “no contest” and is an alternative to “guilty” or “not guilty”, meaning that one doesn’t admit guilt but nor does one dispute the charge.

60. Actor Cage, informally : NIC
Nic Cage was born Nicolas Coppola. Cage is the nephew of director Francis Ford Coppola and actress Talia Shire, both of whom are his father’s siblings.

61. Sci-fi drug : TEK
The “Tekwar” series of science-fiction novels was co-authored by Ron Goulart and the actor William Shatner, although it’s only Shatner’s name that appears on the book covers. The stories center around the microchip “drug” called “tek” which dominates the Tekwar universe.