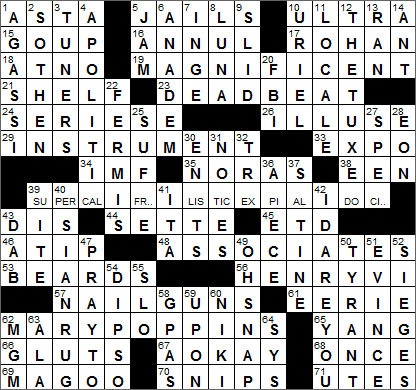 CROSSWORD SETTER: Timothy Polin
THEME: Super Song … we have a rebus puzzle today, with the song title “SUPERCALIFRAGILISTICEXPIALIDOCIOUS”squeezed into the center of the grid:

39A. Mouthful from a 1964 song : SUPERCALIFRAGILISTICEXPIALIDOCIOUS
19A. What 39-Across means : MAGNIFICENT
62A. Musical featuring 39-Across : MARY POPPINS

Today’s Wiki-est, Amazonian Googlies
Across
1. Top dog in Hollywood in the 1930s : ASTA
Asta is the wonderful little dog in the superb “The Thin Man” series of films starring William Powell and Myrna Loy (as Nick and Nora Charles). In the original story by Dashiell Hammett, Asta was a female Schnauzer, but on screen Asta was played by a wire-haired fox terrier called “Skippy”. Skippy was also the dog in “Bringing up Baby” with Cary Grant and Katharine Hepburn, the one who kept stealing the dinosaur bone. Skippy retired in 1939, so Asta was played by other dogs in the remainder of “The Thin Man” films.

16. Abrogate : ANNUL
Abrogate is such a lovely sounding word. It means to annul or do away with, especially by authority.

17. Gondor’s northern ally in Middle-earth : ROHAN
Rohan is one of the realms in J. R. R. Tolkien’s Middle-earth, a realm which features most significantly in his book “The Lord of the Rings”.

18. 42, for Mo : AT NO
The atomic number of an element is also called the proton number, and is the number of protons found in the nucleus of each atom of the element.

24. W.W. II bond type : SERIES E
Series E Savings Bonds were introduced in 1941, just before the start of WWII, as “defense bonds”. After the attack on Pearl Harbor they became known as “war bonds”.

34. Global capital inst. : IMF
The International Monetary Fund (IMF) was established at the end of 1945 with 29 major economies supporting and funding an effort to stabilize economies across the globe after WWII. Headquartered in Washington, D.C., today the IMF has 187 member countries.

35. Comedian Dunn and others : NORAS
Nora Dunn is a comedian best known as a cast member on “Saturday Night Live”.

38. Gloaming, to a poet : E’EN
“Gloaming” is an alternative word for twilight or dusk, and is often used poetically. The word is particularly associated with Scottish poetry, and notably the work of Robert Burns.

39. Mouthful from a 1964 song : SUPERCALIFRAGILISTICEXPIALIDOCIOUS
The title of the “Mary Poppins” song “Supercalifragilisticexpialidocious” has been broken into it’s individual components and given the meaning “Atoning for educability through delicate beauty”. I am none the wiser …

43. Slam : DIS
“Dis” is a slang term meaning “insult” that originated in the eighties, and is a shortened form of “disrespect” or “dismiss”.

44. Number of giorni in a week : SETTE
In Italian, there are seven (sette) days (giorni) in a week.

46. On tenterhooks : ATIP
The literal meaning of “tenterhooks” is “hooks that hold cloth in place on a tenter”. A tenter is a frame over which cloth is stretched in the process of manufacture so that it may dry evenly.

53. What shadows become as they lengthen : BEARDS
That five o’clock shadow will grow into a beard on a man’s face if it is left long enough.

56. The Wars of the Roses began during his reign : HENRY VI
King Henry VI of England succeeded to the throne when he was just nine months old, making him the youngest monarch ever to sit on the English throne.

The Wars of the Roses was a series of civil wars fought for the throne of England between the rival Houses of Lancaster and York. Ultimately the Lancastrians emerged victorious after Henry Tudor defeated King Richard III at the Battle of Bosworth Field. Henry was crowned King Henry VII, and so began the Tudor dynasty. Henry Tudor united the rival houses by marrying his cousin Elizabeth of York. Henry VII had a relatively long reign of 23 years that lasted until his death, after which his son succeeded to the throne as Henry VIII, continuing the relatively short-lived Tudor dynasty. Henry VIII ruled from 1509 until his death in 1547. Henry VIII was the last male to lead the the House of Tudor, as his daughter Queen Elizabeth I died without issue. When Elizabeth died, the Scottish King James VI succeeded to the throne as James I of England and Ireland. James I was the first English monarch of the House of Stuart.

61. Preternatural : EERIE
“Preternatural” is another word for supernatural. The term comes from the Latin phrase “praeter naturam” meaning “beyond nature”.

62. Musical featuring 39-Across : MARY POPPINS
The “Mary Poppins” series of children’s novels was written by Australian-born English writer and actress P. L. Travers. Mary Poppins is a magical children’s nanny with a best friend called Bert. In the famous musical film adaptation of the Mary Poppins stories, Poppins is played by Julie Andrews and Bert is played Dick Van Dyke.

69. Mr. in two Oscar-winning shorts : MAGOO
Mr. Quincy Magoo is a wonderful cartoon character voiced by Jim Backus. Backus is probably equally well-known for playing Mr. Magoo as well as Thurston Howell, III on “Gilligan’s Island”. Mr. Magoo first appeared on the screen in a short called “The Ragtime Bear” in 1949. His persona was at least in part based on the antics of W. C. Fields. Backus originally used a fake rubber nose that pinched his nostrils in order to create the distinctive voice, although in time he learned to do the voice without the prop. My absolute favorite appearance by Mr. Magoo is in “Mr Magoo’s Christmas Carol”, a true classic from the sixties. There was a movie adaptation of “Mr Magoo” released in 1997, with Leslie Nielsen playing the title role.

71. The Pac-12’s Runnin’ ___ : UTES
The Runnin’ Utes are the basketball team of the University of Utah. The team was given the nickname the Runnin’ Redskins back when Jack Gardner was the head coach from 1953 to 1971. The “Runnin'” part of the name was chosen because Gardner was famous for playing quick offenses. The “Redskins” name was later dropped in favor of the less controversial “Utes”.

Down
1. Sports champion whose father twice represented Iran as an Olympic boxer : AGASSI
Renowned tennis professional Andre Agassi wrote an autobiography called “Open”, published in 2009. An amazing revelation in the book is that Agassi’s famous head of hair was actually a wig for much of his playing career. Can you imagine how hard it must have been to play tennis at his level with a rug stuck on?

6. Floral garland : ANADEM
An anadem is a wreath or garland worn around the head, derived from the Greek word for “to bind up”.

7. Playwright William : INGE
Playwright William Inge had a run of success on Broadway in the early fifties. Inge’s most celebrated work of that time was the play “Picnic”, for which he was awarded a Pulitzer Prize. The original 1953 cast of “Picnic” included a young male actor making his debut on Broadway. His name was Paul Newman. Many of Inge’s works are set in the American heartland and so he became known as the “Playwright of the Midwest”.

8. 1960s-’70s Soviet space program : LUNA
The Soviet Union’s Luna program sent a series of unmanned spacecraft to the moon, some ebing orbiters and some landers. Luna 2 hit the moon’s surface in 1959, and became the first manmade object to reach the moon. Luna 17 and Luna 21 carried robotic vehicles that roamed around the moon in 1970 and 1973. Some Luna missions went to the moon, collected samples and then returned those samples to Earth.

10. Archangel in “Paradise Lost” : URIEL
Uriel is one of the archangels in the Jewish and Christian traditions.

12. Jackie Chan action film featuring a high-tech jacket : THE TUXEDO
“The Tuxedo” is a 2002 spy spoof starring Jackie Chan and Jennifer Love Hewitt. Chan plays a taxi driver who acquires a gadget tuxedo that gives him special abilities. With the tuxedo he can fight using martial arts, has great speed and can even dance!

13. Reacted pusillanimously : RAN
Someone described as “pusillanimous” lacks courage and resolution. The term comes into English via Middle French from the Latin “pusillis” meaning “very weak” and “animus” meaning “spirit”.

22. Minuscule distance units : FERMIS
A femtometer is 10 to the power of -15 meters, and can also be called a “fermi”, in honor of physicist Enrico Fermi.

The physicist Enrico Fermi was born in Rome, Italy. Fermi moved to the US just before WWII, largely to escape the anti-Semitic feelings that were developing in Italy under Mussolini. It was Fermi’s work at the University of Chicago that led to the construction of the world’s first nuclear reactor. Fermi died at 53 years of age from stomach cancer. Cancer was a prevalent cause of death among the team working on that first nuclear pile. The synthetic element Fermium was discovered in 1952 and is named in his honor.

25. Subject of the 15th and 19th Amendments : SUFFRAGE
The Fifteenth Amendment to the US constitution guarantees a citizen’s right to vote, regardless of “race, color or previous condition of servitude”.

The 19th Amendment to the US Constitution prohibits the denial of voting rights to citizens based on sex, and was ratified by the states in 1920. The amendment was first drafted by Susan B. Anthony and Elizabeth Cady Stanton in 1878, but it wasn’t submitted by the Congress to the states for ratification until 1919.

32. Natural history museum attraction, for short : T REX
The Tyrannosaurus rex (usually written T. rex) was a spectacular looking dinosaur. “Tyrannosaurus” comes from the Greek words “tyrannos” (tyrant) and “sauros” (lizard), and the “rex” is of course Latin for “king”. They were big boys, measuring 42 feet long and 13 feet tall at the hips, and weighing 7.5 tons.

51. Bespeak : EVINCE
“To evince” is to show clearly, to make evident.

52. Protracted campaigns : SIEGES
Our word “siege” comes from a 13th century word for a “seat”. The military usage derives from the concept of a besieging force “sitting down” outside a fortress until it falls.

54. Tosspot : DIPSO
“Dipsomania” is a craving for alcohol to the point of damaging one’s health. “Dipsa” is the Greek for “thirst”, hence dipsomania is a “manic thirst”.

Drunks have been referred to as tosspots since the mid-1500s. Back then, a tosspot was someone who habitually “tossed” back numerous “pots” of ale.

60. Supermodel Taylor : NIKI
Niki Taylor is a supermodel from Fort Lauderdale, Florida. Taylor has been modeling since she was 13 years old. Sadly, Taylor was involved in a car accident in 2001, after which she needed two steel rods inserted in her back to hold her spine together. She was in a coma for six week, and needed 56 operations to help with her recovery.

62. “Grand” letters : MGM
MGM Grand is the name given to a chain of hotel resorts and casinos, most famously the MGM Grand in Las Vegas. The MGM Grand Las Vegas was the largest hotel in the world when it opened in 1993, and is now second largest (behind the Venetian, also in Las Vegas).

64. M.O.: Abbr. : SYS
“Modus operandi” is the Latin for “mode of operating”, a term we’ve been using since the mid-1600s. It’s often used by the police when referring to the methods typically employed by a particular perpetrator of a crime, and is usually abbreviated to “M.O.”