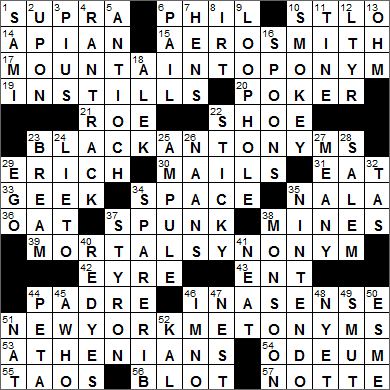 17A. The Olympics or Andes Mints : MOUNTAIN TOPONYM
23A. White and lighted : BLACK ANTONYMS
39A. Deadly or human : MORTAL SYNONYM
51A. Wall Street and Madison Avenue : NEW YORK METONYMS

Today’s Wiki-est, Amazonian Googlies
Across
1. Old Toyota sports car : SUPRA
The Supra was a sporty car made by Toyota from 1979 to 2002. The Supra was in effect a longer and wider Celica.

10. Scene of W.W. II fighting : ST LO
Saint-Lô is a town in Normandy that was occupied by Germany in 1940. Saint-Lo stood at a strategic crossroads and so there was intense fighting there during the Normandy invasion of 1944. After a prolonged bombardment, very little of the town was left standing.

14. Packing a sting? : APIAN
Something described as “apian” is related to bees. “Apis” is the Latin for “bee”.

15. “Sweet Emotion” band : AEROSMITH
Aerosmith is a hard rock band from Boston that formed in 1970. Aerosmith is the best-selling American rock band of all time, and holds the record for most gold albums by any American group.

17. The Olympics or Andes Mints : MOUNTAIN TOPONYM
A “toponym” is a name that comes from a place or region. For example, New Jersey is named for the island of Jersey in the English Channel and Indianapolis is named for the state of Indiana.

21. Mentaiko, at a sushi bar : ROE
Mentaiko is an ingredient often used in Japan. It is the marinated roe of pollock and cod.

22. Last place? : SHOE
A “last” is a tool used by a cobbler that has the shape of a human foot. A last is used as a block on which a shoe is placed for fabrication or for repair.

29. Segal who wrote “Love Story” : ERICH
Erich Segal wrote two hit screenplays, “Yellow Submarine” (the Beatles’ animated movie) and “Love Story” (starring Ryan O’Neal and Ali MacGraw). He wrote the novel “Love Story” after the screenplay. As the novel was published before the film was released, there’s a popular misconception that the movie is based on the book.

36. Grain in Nutri-Grain : OAT
The Nutri-Grain brand of breakfast foods is made by Kellogg. The brand was actually first introduced in Australia in 1981.

37. Vivacity : SPUNK
We’ve been using the word “spunk” to mean “pluck, courage” since the late 1700s. Prior to that it was a Scottish word meaning “spark” that we absorbed into English.

38. Searches for the useful parts of, as data : MINES
The process of data mining is used to extract information from a database and present it in a form that facilitates further use.

42. Orphan of British literature : EYRE
“Jane Eyre” is the celebrated novel written by Charlotte Brontë, under the pen name Currer Bell. Over the years, I’ve shared here on my blogs that the “Jane Eyre” story line is a little too dark and Gothic for my taste, but a very persuasive blog reader convinced me to look more at the romantic side of the story and give it a second chance. I watched a wonderful 4-hour television adaptation of the novel made by the BBC a while back and I have to say that because I was focused on the relationship between Jane and Rochester, I was able to push past the Gothic influences (that depress me) so I really enjoyed the story. I thoroughly recommend the 2006 BBC adaptation to fans of the novel.

51. Wall Street and Madison Avenue : NEW YORK METONYMS
A metonym is a word that is used for something that is closely associated with that word. For example, “Broadway” is a metonym for “American theater” and “Washington” is a metonym for “the US government”.

54. Theater : ODEUM
In Ancient Greece an odeon (also odeum) was like a small theater, with “odeon” literally meaning a “building for musical competition”. Odea were used in both Greece and Rome for entertainments such as musical shows and poetry readings.

55. New Mexico’s ___ Ski Valley : TAOS
Taos Ski Valley is a resort village in New Mexico, founded in 1955. About twelve families live there, making up thirty or so households and a population of about 60 people. It is said to very much resemble a Swiss village, and even includes an elected village council.

Down
1. Arctic residents : SAMI
Lapland is a geographic region in northern Scandinavia, largely found within the Arctic Circle. Parts of Lapland are in Norway, Sweden and Finland. The people who are native to the region are called the Sami people. The Sami don’t like to be referred to as “Lapps” and they regard the term as insulting.

3. Papal name last used in 1958 : PIUS
There have been twelve popes named Pius, the latest being Pope Pius XII who led the Roman Catholic Church until his death in 1958.

5. Third-largest city of the Roman Empire : ANTIOCH
Antioch on the Orontes was an ancient Greek city that was once the capital of Syria. The city lay on the banks of the Orontes River, and its ruins now lie in modern Turkey.

7. Roosters … or not roosters? : HENS
Hen’s may inhabit a roost, but they’re female, so aren’t “roosters”.

8. Big Apple subway line : IRT
The Interborough Rapid Transit Company (IRT) was the original private operator of the New York Subway when it opened in 1904. The city took over ownership of the system in 1940, but the lines originally operated by the IRT are still known by the IRT moniker.

10. Safety icon : SMOKEY
Smokey Bear is the mascot of the US Forest Service. Smokey first appeared in 1944, in an advertising campaign directed towards preventing forest fires.

12. Astronomical distance: Abbr. : LT YR
A light-year (lt. yr.) is a measure of distance, not time. It is the distance that light travels in a vacuum in one year. The accepted abbreviation for a light-year is “ly”. A light-second is a lot shorter distance: about 186,282 miles.

13. German electrical pioneer : OHM
The unit of electrical resistance is the ohm (with the symbol omega) named after German physicist Georg Simon Ohm. Ohm was the guy who established experimentally that the amount of current flowing through a circuit is directly proportional to the voltage applied, (V=IR) a relationship that every school kid knows as Ohm’s Law.

25. It may hold the solution : AMPULE
An ampule is a sealed vial that is commonly used to hold pharmaceuticals. Ampoules are usually made from glass, and are opened by snapping off the neck of the container.

26. Indian flatbreads : NAANS
Naan (also “nan”) bread is very popular in Indian restaurants, as well as in other West, Central and South Asian cuisines. Indian Naan is traditionally baked in a clay oven known as a tandoor.

28. It “refreshes naturally,” in old ads : SALEM
The Salem brand was introduced in 1956 as the first filter-tipped menthol cigarette. Salem is an R. J. Reynolds brand, and along with the Winston brand, is named for the city of Winston-Salem, North Carolina, where R. J. Reynolds is headquartered.

34. Part of a rack : SPARE RIB
Spare ribs are so called because “spare” can indicate the absence of fat.

35. Company that owns the Seattle Mariners : NINTENDO
The Seattle Mariners are one of only two Major League teams never to have appeared in a World Series. The other is the Washington Nationals. The Mariners are owned by the Nintendo Corporation of America, making them one of three Major League teams owned by businesses. The other two are the Atlanta Braves (owned by Liberty Media) and the Toronto Blue Jays (owned by Rogers Communications).

45. What Horton heard : A WHO
Horton the elephant turns up in two books by Dr. Seuss: “Horton Hatches the Egg” and “Horton Hears a Who!”

46. Mae West’s “___ Angel” : I’M NO
“I’m No Angel” is an 1933 film starring Mae West and a very young Cary Grant who just making a name for himself in Hollywood. “I’m No Angel” gives us some iconic Mae West quotations:

Soviet Premier Nikita Khrushchev only ever made two visits to the United States. The second visit was in September 1960 without an invitation, when he appointed himself temporary head of the USSR delegation to the United Nations. The US responded to his unannounced visit by limiting his travel to the island of Manhattan and visits to a Soviet-owned estate on Long Island. During one of the debates at the UN, Khrushchev became outraged at a statement made by the Filipino delegate who called the Soviets two-faced for decrying colonialism while forcibly dominating and occupying Eastern Europe. Khrushchev demanded the right to reply immediately, and when the Filipino delegate refused to yield, the Soviet leader famously took off his shoe and began to pound it on his desk.

49. Some banned literature : SMUT
“Smut” means “dirt, smudge” and more recently “pornographic material”. The term comes from the Yiddish “schmutz”, which is a slang word used in English for dirt, as in “dirt on one’s face”.

50. Salinger dedicatee : ESME
J. D. Salinger wrote a short story called “For Esme – with Love and Squalor”, originally published in “The New Yorker” in 1950. It is a story about a young English girl called Esme and an American soldier, and is set in WWII.

51. Commercial lead-in to Geo : NAT
The National Geographic Society started as a club for academics and wealthy people interested in travel, founded in 1888 in Washington, D.C. The society’s “National Geographic Magazine” was first published at the end of the same year. I’ve always thought it very cool that the logo of the society (you can see it on the National Geographic cable TV channel) is simply the rectangular yellow frame that appears in the margins around the front cover of the magazine.