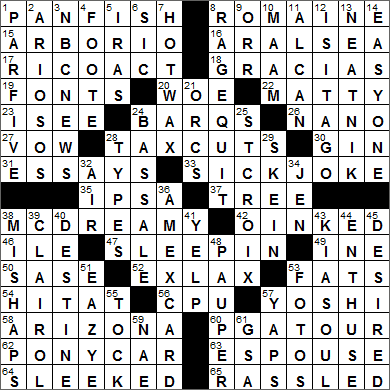 Today’s Wiki-est, Amazonian Googlies
Across
1. Bluegill or crappie : PANFISH
“Panfish” are gamefish that are usually pan-fried for the table.

8. Iceberg neighbor : ROMAINE
Romaine is also known as cos lettuce, with the “romaine” name being most common here in North America. One suggestion is that the lettuce originated on the Greek island of Cos, and arrives in the west via Rome, hence the names “cos” and “romaine”.

15. Rice variety used in rice pudding : ARBORIO
Arborio is a short-grain rice that originated in the Italian town of Arborio in the Po Valley.

16. The Amu Darya no longer feeds it : ARAL SEA
The Aral Sea is a great example of how man can have a devastating effect on his environment. In the early sixties the Aral Sea covered 68,000 square miles of Central Asia. Soviet Union irrigation projects drained the lake to such an extent that today the total area is less than 7,000 square miles, with 90% of the lake now completely dry. Sad …

17. Mob law? : RICO ACT
The RICO act is more fully called the Racketeer Influenced and Corrupt Organizations Act. The law was used largely to prosecute members of the Mafia in the seventies, and has been applied more broadly since.

18. Follower of un favor : GRACIAS
In Spanish, one might say “thank you” (gracias) for a favor (un favor).

22. One of Jesus’ brothers, in baseball : MATTY
Jesus Alou played major league baseball, as did his brothers Matty and Felipe, and as does Felipe’s son Moises.

24. Hires competition : BARQ’S
When the Barq Brothers decided to go into the root beer business around 1900, they were faced with a dilemma as the Hires Root Beer Company was attempting to trademark the term “root beer”. So, the Barqs produced their beverage and called it simply Barq’s. They did indeed keep things simple, with an early advertising slogan of “Drink Barq’s. It’s good.” As the trademark issue dissipated, the company then introduced a slogan “Is it root beer?” before finally “coming out” and calling their drink “Barq’s root beer”.

26. Head of technology? : NANO-
Nanotechnology is the study of the manipulation of matter at the atomic and molecular level. Nanotechnology is essential to the electronic and biomaterials industries.

28. Tea Party goals : TAX CUTS
The famous destruction of tea in Boston Harbor to protest against the Tax Act took place on December 16, 1773. The action was referred to as the “destruction of the tea” for decades, and it wasn’t until 1834 that the term “Boston Tea Party” first appeared in print.

30. Game-ending exclamation : GIN!
Gin rummy is a variant of the slower game of standard rummy and was introduced in 1909 by one Elwood Baker and his son.

35. Itself, in a Latin legal phrase : IPSA
The literal translation of the legal term “res ipsa loquitur” is “the thing speaks for itself”. It refers to situations when there is an injury, and the nature of the injury is such that one can assume that negligence had to have taken place.

49. Plastic finish? : -INE
Plasticine is the brand of modelling clay that I used to play with growing up in Ireland and the UK. Plasticine is the material of choice used for many stop-motion animation films such as the “Wallace and Gromit” series.

52. “Excellent mornings guaranteed” product : EX-LAX
Ex-Lax is a brand of laxative. That should get you going …

56. Core of a tablet, briefly : CPU
The Central Processing Unit (CPU) is the main component on the “motherboard” of a computer. The CPU is the part of the computer that carries out most of the functions required by a program. Nowadays you can get CPUs in everything from cars to telephones.

57. Dinosaur in many Nintendo games : YOSHI
Yoshi is a dinosaur-like character in some Nintendo video games. He first appeared as a sidekick for Mario and Luigi in the 1991 game called “Super Mario World”.

58. Brand name whose middle letter is capitalized for no apparent reason : ARIZONA
The AriZona Beverage Company has been making flavored iced tea drinks since 1992. Paradoxically, the company is not based in Arizona, but rather on Long Island in New York State.

62. Mustang, e.g. : PONY CAR
The Ford Mustang car was introduced in 1964. Back then the Mustang wasn’t a brand new design, but was based on the Ford Falcon. The Mustang was the first of the “pony cars”, American models that are compact and affordable, as well as sporty in image and performance.

2. Relatives of recitatives : ARIOSOS
An arioso (plural “ariosi”) is a solo vocal piece in a classical work such as an opera or an oratorio. An arioso’s structure lies somewhere between that of a full-blown aria and speech-like recitative.

3. “Dateline” group : NBC NEWS
“Dateline NBC” is a weekly show that has been on the air since 2011. Originally a news magazine show, it now focuses on true crime stories.

5. They can roll over, briefly : IRAS
A rollover IRA is a subtype of a traditional Individual Retirement Account (IRA). The funds for a rollover IRA come from another qualified plan such as a 401(k) or a 403(b) account.

6. Editorial qualification : SIC
“Sic” indicates that a quotation is written as originally found, perhaps including a typo. “Sic” is Latin for “thus, like this”.

7. Brazilian supply : HOT WAX
Brazilian waxing is the removal of all hair in the pelvic area. The practice took off (pun) relatively recently with introduction of thong bikinis, especially for the beaches of Brazil. Brazilian waxing was popularized here in the US by J. Sisters International Salon in Manhattan, New York that opened in 1987. The “J Sisters” were seven real sisters from Brazil, named Jocely, Jonice, Joyce, Janea, Jussara, Juracy and Judseia Padilha.

9. Subject of a statue outside Boston’s TD Garden : ORR
Bobby Orr is a former hockey player from Ontario who played most of his professional career with the Boston Bruins. Orr is regarded as one of the greatest hockey players of all time. A bronze statue of Orr was erected outside Boston’s TD Garden in 2010. By the time he retired in 1978, Orr had undergone over a dozen knee surgeries. At 31 years of age, he concluded that he just couldn’t skate anymore. Reportedly, he was even having trouble walking …

11. U.S.-built route that’s mostly outside the U.S. : ALCAN
The Alaska Highway is also known as the Alaska-Canadian Highway or ALCAN Highway. A highway connecting the contiguous United States to Alaska was proposed in the twenties, but the Canadian authorities didn’t believe the project had much merit as the road would be used by very few of its citizens. The perceived importance of the route increased during WWII and President Roosevelt deemed the road a strategic necessity so he made a deal with Canada. The cost of construction would be born by the US, but the road and related facilities were to be handed over to Canada at the end of the war. The project was accelerated when the Japanese invaded and occupied Kiska and Attu Islands in the Aleutians. The road of course has been improved and is still in use today. The ALCAN Highway forms part of what is popularly known as the Pan-American Highway, which runs from Prudhoe Bay, Alaska to the south of Argentina or Chile depending on how the route is defined.

21. Meanies of fantasy : ORCS
Orcs are mythical humanoid creatures that appear in the writings of J. R. R. Tolkien. Since Tolkien’s use of orcs, they have also been featured in other fantasy fiction and in fantasy games.

24. Its logo was the U.K.’s first registered trademark : BASS ALE
The red triangle on the label of a bottle of Bass Ale was registered in 1875 and is UK Registered Trade Mark (TM) No: 00001, the first trademark issued in the world.

25. Denmark sold it to the U.S. in 1917 : ST CROIX
Saint Croix has been ruled by a number of countries, most recently the US. The first colonists were the Spanish, who named the island Santa Cruz. After Britain and the Netherlands, the French took over control of the island, and named it Saint Croix. Both Santa Cruz and Saint Croix can be translated into English as “Holy Cross”.

29. Tangled mass : SKEIN
I always think of a “skein” as a relatively organized length of thread or yarn, not a “tangled mess”, but maybe it’s just me …

34. Garner, for short : JEN
Jennifer Garner is an actress who garnered (pun!) attention for her recurring role as the lead in the thriller series “Alias” on ABC. Garner is married to fellow actor Ben Affleck.

36. Plastic that’s often green : AMEX CARD
Amex is short for American Express. In dollar terms, there are more transactions conducted in the US using the Amex card than any other card.

39. Born Blonde brand : CLAIROL
“Does she…or doesn’t she? Only her hairdresser knows for sure” was the catchphrase for Miss Clairol Hair Color Bath. Clairol had been around since 1931 selling hair coloring products to salons, and then hit the big time with the introduction of a one-step hair coloring product for use at home. As famous as the product was the “does she … doesn’t she” advertising campaign. Six years after the launch of the campaign, 70% of women in the US were coloring their hair.

41. Business review company with a 2012 I.P.O. : YELP
yelp.com is a website that provides a local business directory and reviews of services. The site is sort of like Yellow Pages on steroids, and the term “yelp” is derived from “yel-low p-ages”.

43. Korean compact : KIA SOUL
The Kia Soul is a compact car produced in South Korea, although it was designed by Kia here in Irvine, California. Yep, the Kia Soul is made in Seoul …

48. Twain’s Tom Canty, e.g. : PAUPER
In Mark Twain’s 1881 novel “The Prince and Pauper”, the title characters are Prince Edward, son of English King Henry VIII, and Tom Canty, the son of a poor and abusive father who lives in London.

51. The Godfather of Gangsta Rap : EAZY-E
Eazy-E was the stage name of rapper Eric Lynn Wright. Eazy-E had a pretty liberal lifestyle, fathering seven children with six different women. In 1995, he died due to complications from AIDS. He was only 32 years old.

61. It auctions off used fed. property : GSA
The US Government’s General Services Administration (GSA), as the name suggests, provides general services to other federal agencies. So for example, the GSA manages office space for the other agencies, and transportation.