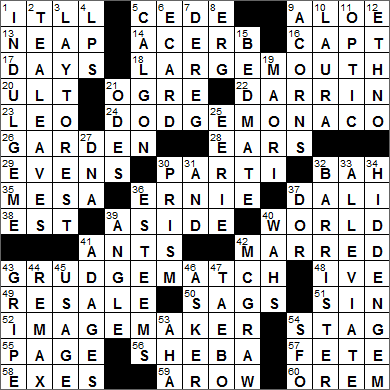 34D. Well-kept secret … or a hint to the answer to each starred clue : HIDDEN GEM

14. Harsh : ACERB
“Acerb” is a variant of “acerbic”, meaning sour or bitter-tasting, acidic.

16. One with special quarters: Abbr. : CAPT
I am guessing that the reference is to a captain’s quarters on a seagoing vessel.

18. *Kind of bass : LARGEMOUTH
The largemouth bass is a freshwater fish that isn’t a bass at all, but rather is a member of the sunfish family.

21. Man-eater : OGRE
An ogre is a monster of mythology and folktales that has the appearance of a man, and which eats human beings. The term “ogre” comes to us via French from the name of the Etruscan god Orcus, who feasted on the flesh of humans.

The delightful sitcom “Bewitched” originally ran on ABC from 1964 to 1972. The lead character in the show is Samantha Stephens, played by the lovely Elizabeth Montgomery. Elizabeth was the daughter of Hollywood star Robert Montgomery.

23. One of 13 popes : LEO
The first pope named Leo is now known as Pope Saint Leo the Great. Leo I is famous for meeting with the feared Attila the Hun and persuading him to turn back his invading force that was threatening to overrun Western Europe.

26. ___ City, Long Island : GARDEN
Garden City is a village on Long Island, just under twenty miles east of midtown Manhattan. Charles Lindbergh took off from Roosevelt Field in nearby East Garden City in 1927, starting his historic solo flight across the Atlantic Ocean.

35. Southwest hikers’ destination : MESA
The city of Mesa, Arizona is in effect a suburb of Phoenix. The original settlement of non-Native Americans was founded by Daniel Webster Jones who led a Mormon group from St. George, Utah. The settlement was first called Jonesville, then Fort Utah and eventually Lehi. A second group of Mormons arrived and formed a settlement on top of a nearby mesa. It was this use of a mesa that eventually gave the city its current name.

36. Cartoonist Bushmiller who created “Nancy” : ERNIE
The comics character Nancy first appeared a strip called “Fritzi Ritz” that had been created by Larry Whittington, which Ernie Bushmiller took over in 1925. Nancy debuted in “Fritzi Ritz” in 1933, and her great reception led to Bushmiller renaming the strip to “Nancy” in 1938. Nancy Ritz is Fritzi’s mischievous young niece.

41. Myrmecophobe’s fear : ANTS
“Myrmeco-” is a combining form meaning “ant”, as in “myrmecophobe” meaning “‘someone afraid of ants, and “myrmecology” meaning “the study of ants”.

56. Old Testament kingdom : SHEBA
Sheba is referenced in the Bible several times. The “Queen of Sheba” is mentioned as someone who traveled to Jerusalem to behold the fame of King Solomon. No one knows for sure where the kingdom of Sheba was located, although there is evidence that it was actually the ancient Semitic civilization of Saba. The Sabeans lived in what today is Yemen, on the Arabian Peninsula.

60. U.S. city that’s an anagram of a world capital : OREM
Orem, Utah was originally known as “Sharon” (a Biblical name), then “Provo Bench”, and in 1914 it was given the family name of a local railroad operator called “Orem”. Orem gave itself the nickname “Family City USA” and sure enough in 2010, “Forbes” rated Orem the 5th best place in the country to raise a family.

Down
2. Reading material for the future? : TEA LEAVES
“Tasseography” is the name given to reading fortunes by interpreting the patterns of tea leaves, coffee grounds and wine sediments that are left in the bottom of a cup or glass.

5. Brand of bath beads : CALGON
The Calgon brand was originally associated with a product that used up calcium ions in the water that inhibit the efficacy of soap. The name Calgon is derived from this effect, i.e. CAL-cium GON-e!!

6. Gift with a GIF, maybe : E-CARD
A bitmap is an image file format used to store digital images. Basically, each pixel in a bitmap file is stored as a “bit” of information, hence the name “bitmap”. In 1987, CompuServe introduced a new type of image file called the Graphics Interchange Format (GIF). A GIF image takes the same information as a bitmap and then compresses it, resulting in a smaller file size. However, during compression the image may lose some resolution. The GIF format also handles short video clips, usually animations.

7. Libertarian’s aim, for short : DEREG
By definition, a “libertarian” is the antithesis of an “authoritarian”. The US Libertarian Party was founded in 1971, prompted in part by concerns about the Vietnam War and conscription.

8. Physics unit : ERG
An erg is a unit of energy or mechanical work. “Erg” comes from the Greek word “ergon” meaning “work”. A dyne is a unit of force. The name “dyne” comes from the Greek “dynamis” meaning “power, force”. Ergs and dynes are related to each other in that one erg is the amount of energy needed to move a force of one dyne over a distance of one centimeter.

10. Classic 1944 Otto Preminger film noir : LAURA
“Laura” is a 1944 film noir directed by Otto Preminger, starring Gene Tierney and Dana Andrews. The film’s screenplay is based on a novel of the same name by Vera Caspary, first published in 1943. “Laura” is ranked highly in most critics’ list of favorite movies.

Otto Preminger was noted for his films that pushed the envelope in terms of subject matter, at least in the fifties and sixties. Great examples would be 1955’s “The Man with the Golden Arm” that dealt with drug addiction, 1959’s “Anatomy of a Murder” that dealt with rape, and 1962’s “Advise and Consent” that dealt with homosexuality. If you’ve seen these films, you’ll have noticed that the references are somewhat indirect and disguised, in order to get past the censors.

12. Prefix with biology : ETHNO-
Ethnobiology is the study of the relationship between plants and animals and the humans of different cultures. The emphasis is on the way animals and plants are treated by different human cultures.

19. Official New Zealand language besides English : MAORI
The Māori are the indigenous people of New Zealand. The Māori are eastern Polynesian in origin and began arriving in New Zealand relatively recently, starting sometime in the late 13th century. The word “māori” simply means “normal”, distinguishing the mortal human being from spiritual entities.

30. Light splitter : PRISM
When light passes through a prism, it is split up (“disperses”) into differing wavelengths. It then becomes clear that white light is actually a mixture of different colors, which show up as beautiful spectra.

32. Wig wearer : BARRISTER
In a common law jurisdiction with a split legal profession, such as England, lawyers can be either solicitors or barristers. Someone needing legal help will retain a solicitor for that purpose. If a court trial is required, then that a barrister is retained to make representation before a judge and perhaps a jury. The barrister is the lawyer who wears the wig.

37. Palme ___ (top prize at Cannes) : D’OR
The “Palme d’Or” (or “Golden Palm” in English) is the highest award given at the Cannes Film Festival. The Palme d’Or goes to the director of the film selected as the best shown at the festival that year. The palm was selected as an emblem for the award as there is a palm featured on the coat of arms of the Commune of Cannes.

43. Beef : GRIPE
A “beef” is a complaint or a grievance. It’s not quite clear how “beef” came to have this meaning, but one suggestion is that derives from the habit of soldiers at the end of the 1800s complaining about the quality or availability of beef in their rations.

44. Big name in real estate : RE/MAX
RE/MAX is an international real estate company headquartered in Denver, Colorado. The name RE/MAX stands for “real estate maximum”, and the company’s logo is a hot air balloon with RE/MAX emblazoned on it.

47. Exercise with a portmanteau name : TAE BO
Tae Bo isn’t an ancient martial art, and rather was developed as a form of aerobic exercise in the 1990s. The discipline was introduced by taekwondo expert Billy Blanks who gave it the name Tae Bo, a melding of “taekwondo” and “boxing”.

54. Calif. air hub : SFO
San Francisco International Airport (SFO) serves as the main base of operations for Virgin America, and is also the maintenance hub for United Airlines. SFO was the site of a 2013 crash of an Asiana Airlines Boeing 777 that resulted in three fatalities.