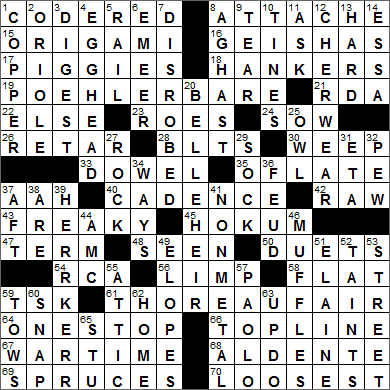 Today’s Wiki-est, Amazonian Googlies
Across
8. Case for a lawyer, maybe : ATTACHE
Attaché is a French term which literally means “attached”, and is used for a person who is assigned to the administrative staff of some agency or other service. The term is most recognized as it applies to someone assigned to an Ambassador’s staff at an embassy. The word was extended to “attaché case” at the beginning of the twentieth century, meaning a leather case used for carrying papers, perhaps by an attaché at an embassy.

15. Paper work not usually done at the office : ORIGAMI
Origami is the traditional Japanese art form of paper folding. The best-known example of the craft is the paper crane. The word “origami” is derived from “ori“ (folding) and “kami” (paper).

17. Quintet in a nursery rhyme : PIGGIES

19. Naked “Parks and Recreation” star? : POEHLER BARE (sounds like “polar bear”)
Amy Poehler was a cast member on “Saturday Night Live” from 2001 to 2008, notable for appearing in many great sketches, including those where she played Hillary Clinton opposite Tina Fey’s Sarah Palin. Poehler also starred with Fey in the 2008 movie “Baby Mama”. And, Poehler led the cast of the sitcom “Parks and Recreation” for its seven-season run.

21. Fig. for a dietitian : RDA
Recommended Daily Allowances (RDAs) were introduced during WWII and are a set of recommendations for the standard daily allowances of specific nutrients. RDAs were effectively absorbed into a broader set of dietary guidelines in 1997 called Recommended Daily Intakes (RDIs). RDIs are used to determine the Daily Values (DV) of foods that are printed on nutrition fact labels on most food that we purchase.

23. Some expensive hors d’oeuvres : ROES
An hors d’oeuvre is the first course in a meal. “Hors d’oeuvre” translates from French as “apart from the work”, really meaning “not the main course”.

“Balderdash” means “senseless jumble of words”. The original balderdash (back before the late 1600s) was a jumbled mix of liquids, like maybe beer and wine, or even beer and milk!

54. Onetime owner of NBC : RCA
The National Broadcasting Company (NBC) has had a number of different logos in its history, including the famous peacock with which we are familiar today. The first peacock logo was introduced in the early days of color television and was designed to illustrate how wonderful color television would be, so go buy one! (NBC was owned by RCA, and so had a vested interest in sales of color television sets).

61. Event at Walden Pond? : THOREAU FAIR (sounds like “thoroughfare”)
Henry David Thoreau is a personal hero of mine. Thoreau is best known for his book called “Walden” published in 1854. The book outlines his philosophy of life and details his experiences living in a cabin near Walden Pond just outside Concord, Massachusetts.

67. “The last thing I wanted to do was to be a ___ president”: Lyndon Johnson : WARTIME
Here are a couple of quotes from President Lyndon B. Johnson, all related to the Vietnam War:

– We are not about to send American boys 9 or 10 thousand miles away from home to do what Asian boys ought to be doing for themselves.
– Peace is a journey of a thousand miles and it must be taken one step at a time.
– The last thing I wanted to do was to be a wartime President.

68. Firm, in a way : AL DENTE
The Italian expression “al dente” literally means “to the tooth” or “to the bite” and is used to describe not only pasta, but also vegetables that are cooked so that they are tender yet still crisp.

Down
1. Conductor of note : COPPER
Copper is a great conductor of electricity because the outer electrons of the copper atom are easily detached. These outer electrons can detach in a chain reactions enabling them to move with very little resistance in a circuit.

2. Maker of a hanging nest : ORIOLE
An oriole’s nest is a woven, cup-like structure that is suspended from a branch like a hammock.

6. Mideast title: Var. : EMEER
In English, “emir” can also be written as emeer, amir and ameer (watch out for those spellings in crosswords!).

12. Clothing line from an Oscar-winning singer? : CHER WEAR (sounds like “shareware”)
Cher’s real name is Cherilyn Sarkisian, born in 1946. In her acting career, Cher was nominated for the Best Supporting Actress Oscar of 1984 for her performance in “Silkwood”. She went further in 1998 and won the Best Actress Oscar for playing Loretta Castorini in “Moonstruck”.

Shareware is software that is distributed for free, although there is usually request to pay non-compulsory license fee.

20. Offspring of Beauty? : BELLE HEIR (sounds like “Bel Air”)
“Beauty and the Beast” is a fairy tale was that was written by novelist Jeanne-Marie Leprince de Beaumont. Titled “La belle et la bête” in French, the story was first published in 1756. The “beauty” in the tale is named “Belle”.

Bel Air is a ritzy neighborhood in Los Angeles, once home to stars of film and television. Famously, the sitcom “The Fresh Prince of Bel Air” was set in the neighborhood. President Ronald Reagan and Nancy Reagan had a home in Bel Air, and in fact the former president passed away there in 2004.

25. Snowy ___ : OWL
The snowy owl (also “snow owl”) is such a beautiful-looking creature, I think. The snowy owl has plumage that is thick and white making it well-adapted for life north of the Arctic Circle.

37. Like a mizzenmast on a ship : AFT
A mizzenmast is found aft of the main mast on a vessel having more than one mast.

39. The Galloping Gourmet in Germany? : HERR KERR (sounds like “haircare”)
Graham Kerr is an English celebrity cook who had a very popular TV show called “The Galloping Gourmet”. Kerr was noted for the liberal use of butter, cream, fat and wine in his recipes. However, after his wife had a stroke followed by a heart attack in 1986, Kerr completely changed his style of cooking, He calls his new style of cuisine “Minimax”, minimizing the fat and cholesterol content while maximizing the aroma, color, texture and taste.

41. Any of about 18 elements on the periodic table : NONMETAL
Although about 80% of the elements in the Periodic Table are metals, the nonmetals hydrogen and helium make up over 99% of the Universe. Additionally, the nonmetal oxygen makes up almost 50% of the Earth’s atmosphere, crust and oceans. And when it comes to living organisms, they are are almost completely made from nonmetals.

51. Paige of Broadway and London’s West End : ELAINE
The English singer and actress Elaine Paige got her big break in musical theater when she was cast at the original Eva Perón in the first production of “Evita”. She was also the first to play Grizabella in “Cats”, giving her a top ten hit with the song “Memory”. She paired up with Barbara Dickson in the musical “Chess” and together released the single “I Know Him So Well”, which is the biggest-selling record in history by a female duo.

63. Pageant coif, maybe : UPDO
A “coif” is a hairdo. The term comes from an old French term “coife”, a skull-cap that was worn under a helmet back in the late 13th century.