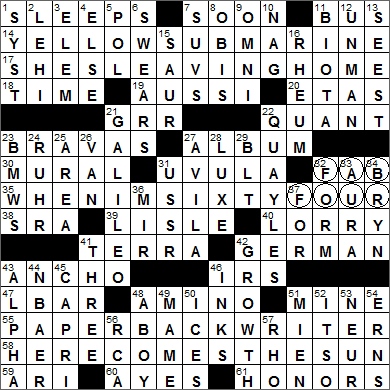 CROSSWORD SETTER: Alex Silverman
THEME: Fab Four … our five themed answers today are the titles of Beatle songs. We also have the FAB FOUR in the grid, shown by the circled letters:

32A. With the shaded squares of 35-Across, subject of this puzzle : FAB
35A. Sexagenarian’s favorite Beatles song? : WHEN I’M SIXTY-FOUR

Today’s Wiki-est, Amazonian Googlies
Across
14. Navy captain’s favorite Beatles song? : YELLOW SUBMARINE
Paul McCartney wrote the song “Yellow Submarine” with Ringo Starr in mind as the lead singer. As he said himself, because it was for Ringo, he wrote something that wasn’t “too rangey”. It turned out be more like a children’s song, and a couple of years later in 1968, the song was used as the title for an animated film. The song is full of sound effects, including John Lennon blowing through a straw into a bowl of water to create a “bubbling”, and Lennon and McCartney speaking into tin cans to create the sound of the captain and officer exchanging orders. And at one point in the recording, a backing vocalist leads everyone around the studio on a conga line, while pounding on a bass drum. What a way to make money, and lots of it …

17. Empty nester’s favorite Beatles song? : SHE’S LEAVING HOME
“She’s Leaving Home” is a 1967 song released by the Beatles on the “Sgt. Pepper’s Lonely Hearts Club Band” album. None of the four members of the band play an instrument in this song, and instead the music is played by a small string orchestra. The lyrics are performed by Paul McCartney and John Lennon. In fact, George Harrison and Ringo Starr weren’t even in the studio at the time of the recording.

20. When planes are due in, for short : ETAS
Estimated time of arrival (ETA)

22. Math whiz, in Wall Street lingo : QUANT
In financial jargon, a “quant” is a quantitative analyst, someone who uses mathematical methodology to assess risk.

30. Wall painting : MURAL
A “mural” is a painting that is applied directly to a wall or a ceiling. The term comes from the Latin “murus” meaning “wall”.

31. Dangling tissue near the tonsils : UVULA
The uvula is that conical fleshy projection hanging down at the back of the soft palate. The uvula plays an important role in human speech, particularly in the making of “guttural” sounds. The Latin word for “grape” is “uva”, so “uvula” is a “little grape”.

32. With the shaded squares of 35-Across, subject of this puzzle : FAB (FOUR)
(35A. Sexagenarian’s favorite Beatles song? : WHEN I’M SIXTY-FOUR)
The Beatles were described on the sleeve notes of their 1963 album “With the Beatles” as the “fabulous foursome”. The press picked up on the phrase and morphed it into “the Fab Four”.

35. Sexagenarian’s favorite Beatles song? : WHEN I’M SIXTY-FOUR
“When I’m Sixty-Four” is a 1967 Beatles song composed by Paul McCartney. McCartney may have been looking forward to “when’s he’s sixty-four”, but he wrote the song when he was only 16 years old.

39. Fine glove material : LISLE
Lisle is a cotton fabric that has been through an extra process at the end of its manufacture that burns off lint and the ends of fibers leaving the fabric very smooth and with a clean edge.

43. Mexican chili pepper : ANCHO
An ancho is a dried poblano pepper. The poblano is a mild chili.

48. ___ acid : AMINO
Amino acids are essential to life in many ways, not least of which is their use as the building blocks of proteins.

55. Author’s favorite Beatles song? : PAPERBACK WRITER
“Paperback Writer” is a Beatles hit from 1966. Apparently Paul McCartney wrote the song after his aunt requested him to come up with a song that wasn’t about love. Soon after, McCartney noticed Ringo Starr reading a book, and so “Paperback Writer” was born.

58. Early riser’s favorite Beatles song? : HERE COMES THE SUN
“Here Comes the Sun” is a song on the Beatles album “Abbey Road”. It is one of the few Beatles recordings that was written by George Harrison.

59. Shipping magnate Onassis : ARI
Aristotle Onassis was born to a successful Greek shipping entrepreneur in Smyrna in modern-day Turkey. However, his family lost its fortune during WWI and so Aristotle worked with his father to build up a new business empire centered on the importation of tobacco. In 1957, Aristotle founded the Greek national airline, what is today called Olympic Air, and he also got into the business of shipping oil around the world. He married Athina Livanos in 1946, the daughter of a wealthy shipping magnate. They had two children, including the famous Christina Onassis. Livanos divorced Onassis on discovering him in bed with the opera singer Maria Callas. Onassis ended his affair with Callas in order to marry Jackie Kennedy in 1968.

Down
1. The “S” of GPS: Abbr. : SYST
The modern Global Positioning System (GPS) that we use today was built by the US military who received the massive funding needed because of fears during the Cold War of the use of Intercontinental Ballistic Missiles. We civilians, all round the world, owe a lot to President Ronald Reagan because he directed the military to make GPS technology available to the public for the common good. President Reagan was moved to do so after the Soviet Union shot down KAL flight 007 carrying 269 people, just because the plane strayed accidentally into Soviet airspace.

2. Where Samson slew the Philistines : LEHI
In the story of Samson in the Bible, Samson is tied up with ropes and taken to Lehi where he breaks free of his bonds and uses the jawbones of an ass to slay one thousand Philistines. The full name for Lehi is Ramath Lehi which translates as “jawbone hill”.

7. Some 4x4s : SUVS
The term SUV, an acronym for Sports Utility Vehicle, was introduced by our marketing friends. Using the term Sports Utility Vehicle was a very clever way to get us to pay a lot of money for what was essentially a station wagon on a truck chassis, or at least it was back then.

8. Japanese sashes : OBIS
The sash worn as part of traditional Japanese dress is known as an obi. The obi can be tied in what is called a butterfly knot.

15. Ending with dino- : -SAUR
Dinosaurs are extinct reptiles that roamed the Earth from the late Triassic period until the Cretaceous-Paleogene extinction event. The term “dinosaur” was coined by English paleontologist Sir Richard Owen in 1842. Owen used the Greek words “deinos” meaning “terrible” and “sauros” meaning “lizard” to come up with the name.

16. Watery eye discharge : RHEUM
Rheum is a watery discharge that comes from the eyes or the nose.

21. Astronomer who discovered the main moons of Jupiter : GALILEO
So far, Jupiter is known to have 67 moons, more than any other planet in the Solar System. The four largest moons (Io, Europa, Ganymede and Callisto) were discovered by Galileo in 1610, making theme the first objects found that did not orbit either the Earth or the Sun.

22. Vice-presidential family of 1989-93 : QUAYLES
Dan Quayle served as both a US Representative and a US Senator from Indiana before becoming the 44th Vice President, under President George H. W. Bush. Quayle refused to run for office in 1996, going up against the Clinton/Gore ticket, but entered the fray again in 2000 seeking the Republican nomination for president. Ironically, he was defeated by the son of his former Commander-in-Chief, George W. Bush.

23. Rivals of Audis : BMWS
The abbreviation BMW stands for Bayerische Motoren Werke, which translates into Bavarian Motor Works. BMW was making aircraft engines during WWI, but had to cease that activity according to the terms of the Treaty of Versailles. The company then started making motorcycles, and then moved into automobile production starting in 1928. BMW moved back into aircraft engine manufacturing during the build-up of the Luftwaffe prior to WWII.

24. ___ Valley, European steelmaking region : RUHR
The Ruhr is a large urban area in western Germany. The area is heavily populated, and is the fifth largest urban area in the whole of Europe, after Istanbul, Moscow, London and Paris. The Ruhr became heavily industrialized due to its large deposits of coal. By 1850, the area contained nearly 300 operating coal mines. Any coal deposits remaining in the area today are too expensive to exploit.

27. St. Teresa of ___ : AVILA
St. Teresa of Avila (also known as St. Teresa of Jesus) was a Carmelite nun living in Spain in the 1500s. She is particularly noted for her writings on Christian meditation and mental prayer.

28. Sumptuousness : LUXE
Luxe is another word for luxury. The term came into English via French from the Latin “luxus” meaning luxury.

31. Lenin’s land, for short : USSR
Vladimir Lenin wasn’t the birth name of the Russian leader. He was born Vladimir Ulyanov, and originally took the name Lenin as a pen name.

34. ___ Mawr : BRYN
I used to live not far from Bryn-mawr (also “Brynmwar”) in Wales, the town with the highest elevation in the country. Appropriately enough, “bryn mawr” is Welsh for “big hill”. There is also a Bryn Mawr in Pennsylvania (note the different capitalization) that is named after its Welsh counterpart. At the Pennsylvania location there’s a Bryn Mawr college, a private women’s school that was the first American university to offer graduate degrees to women.

36. Old Russian space station : MIR
The Russian Mir Space Station was a remarkably successful project, with the station still holding the record for the longest continuous manned presence in space, at just under ten years. Towards the end of the space station’s life however, the years began to take their toll. There was a dangerous fire, multiple system failures, and a collision with a resupply ship. The Russian commitment to the International Space Station drained funds for repairs, so Mir was allowed to reenter the Earth’s atmosphere and burn up in 2001.

The Boston Celtics NBA basketball team were founded just after WWII in 1946. The Celtics won eight league championships in a row from 1958 to 1966. That’s the longest consecutive championship winning streak of any professional sports team in North America.

45. Isle of ___ : CAPRI
The island of Capri off the coast of Southern Italy has been a tourist resort since the days of ancient Rome. Capri is home to the famous Blue Grotto, a sea cave that is illuminated with sunlight , which takes on a lovely blue color as it passes through the seawater into the cave. Natives of Capri are known as “Capriotes”.

49. “We Need a Little Christmas” musical : MAME
The song “We Need a Little Christmas” is from the Broadway musical “Mame”. The original lyrics include the line “But, Auntie Mame, it’s one week past Thanksgiving Day now!”. The Christmas season has become such a commercial windfall and seems to start earlier and earlier each year, so recent recordings have a slightly different lyric: “But, Auntie Mame, it’s one week “from” Thanksgiving Day now!”

53. Prefix with -algia : NEUR-
Neuralgia is a pain along the length of a nerve.

54. Sea eagles : ERNS
The ern (also erne) is also called the white-tailed eagle, and the sea-eagle.

57. Letter between pi and sigma : RHO
Rho is the Greek letter that looks just like our Roman letter “p”.