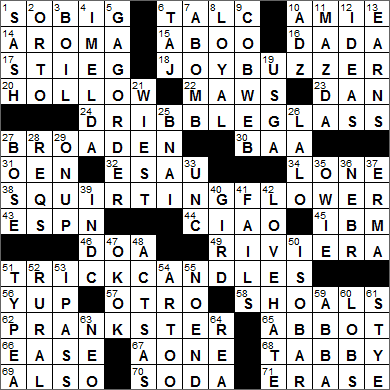 CROSSWORD SETTER: Sharon Delorme
THEME: April Fool! … each of today’s themed answers is something that might be used by a PRANKSTER, with each answer being clued by what the PRANKSTER might say when using the joke item:

Today’s Wiki-est, Amazonian Googlies
Across
1. 1925 Pulitzer Prize winner for Edna Ferber : SO BIG
Edna Ferber was a novelist and playwright from Kalamazoo, Michigan. Ferber won a Pulitzer for her novel “So Big”, which was made into a film a few times, most famously in 1953 starring Jane Wyman.

6. Barber’s sprinkle : TALC
Talc is a mineral, actually hydrated magnesium silicate. Talcum powder is composed of loose talc, although these days “baby powder” is also made from cornstarch.

10. Gallic girlfriend : AMIE
A male friend in France is “un ami”, and a female friend is “une amie”.

18. “Put ‘er there, pal!” : JOY BUZZER
A “joy buzzer” is also known as a “hand buzzer”. It’s that practical joke device that is hidden in the palm of one person before he or she shakes hands with another. When contact is made, a button on the device causes a wound spring to unwind creating a sudden vibration that might be mistaken for an electric shock. The joy buzzer was invented in 1928 by Danish American inventor Soren Sorensen Adams.

30. Welcome to the fold? : BAA
A “fold” is an enclosure for sheep, or an alternative name for a “flock”.

31. Wine: Prefix : OEN-
In Greek mythology, Oeno was the goddess of wine, giving us “oen-” as a prefix meaning “wine”. For example, oenology is the study of wine and an oenophile is a wine-lover.

I saw Esau kissing Kate.
I saw Esau, he saw me, and she saw I saw Esau.

34. “___ Survivor” (2013 war film) : LONE
“Lone Survivor” is a 2013 war film starring Mark Wahlberg as a US Navy SEAL who is the only survivor from a 4-man team in a mission in Afghanistan. The film is based on a 2007 book that recounts the real-life experience of Marcus Luttrell and the comrades that he lost on that mission. It’s a powerful movie …

45. “Smarter Planet” co. : IBM
IBM was founded as the Tabulating Machine Company in 1896. The company changed its name to the Computing Tabulating Recording Corporation (CTR) in 1911 and was listed on the New York Stock Exchange in 1916. The name of International Business Machines (IBM) was given first to the company’s Canadian subsidiary, and then its South American subsidiary. In 1924, it was decided to adopt the International Business Machines name for the whole company. Good choice …

The Côte d’Azur is on the Mediterranean coast of France and stretches from Saint Tropez in the west and to the Italian border in the east. In English we often refer to the area as the French Riviera. It’s a little crowded for me (okay, “expensive”), especially in the summer

68. Meower : TABBY
Tabbies aren’t a breed of cat, but rather are cats with particular markings regardless of breed. Tabbies have coats with stripes, dots and swirling patterns, and usually an “M” mark on the forehead.

Down
4. Well-heeled Marcos? : IMELDA
Imelda Marcos is the widow of former Philippine President Ferdinand Marcos, and is a former politician in her own right. Imelda fled the Philippines with her husband and family in 1986, ending up in exile in Hawaii. She was allowed to return in 1991, and set up residence in an apartment block in Manila. One of my personal claims to fame is that I lived for two years in an apartment block right next door to Imelda Marcos when I lived in Manila …

6. Atlantic City casino, with “the” : TAJ
Donald Trump’s Taj Mahal Casino Resort opened up for business in Atlantic City in 1990.

7. Manhattan Project project, informally : A-BOMB
The Manhattan project was the joint US-Canada-UK project to develop an atomic bomb during WWII. Initially, the Army headquarters for the program was located on the 18th floor of a building on Broadway in New York City. Eventually, because of that first location, the project adopted the name “Manhattan”.

10. Cooper’s tool : ADZ
An adze (also adz) is similar to an axe, but different in that the blade of an adze is set at right angles to the tool’s shaft. An axe’s blade is set in line with the shaft.

A cooper is a craftsman who makes wooden vessels, such as barrels.

11. Toyota competitor : MAZDA
Mazda is a Japanese car manufacturer based in the Hiroshima Prefecture in Japan. The ballpark where the Hiroshima baseball team play was for many years known as the MAZDA Zoom-Zoom Stadium.

19. Links org. : USGA
The United States Golf Association (USGA) was formed in 1894. The need for a governing body for the sport became evident that year when both the Newport Country Club and the St. Andrew’s Golf Club in Yonkers, declared that the winner of a tournament at each of their courses was the “national amateur champion”. The first president of the USGA was Theodore Havemeyer, and to this day the one and only US Amateur Trophy bears his name.

21. Dianne of “Law & Order” : WIEST
Dianne Wiest is an actress from Kansas City, Missouri. Wiest has won two Best Supporting Actress Academy Awards, for “Hannah and Her Sisters” in 1987 and for “Bullets over Broadway” in 1995. In both movies, she was directed by Woody Allen.

26. Film composer Schifrin : LALO
Lalo Schifrin is an Argentine pianist and composer best-known for writing film and television scores. Famously, Schifrin wrote the theme for “Mission: Impossible”, but also for “The Man from U.N.C.L.E.”, “Mannix” and “Starsky and Hutch”.

27. Big name in audio equipment : BOSE
Bose Corporation was founded in 1964 by Amar G. Bose, and is a company that specializes in manufacture of audio equipment.

29. Curtis Mayfield’s “Move ___” : ON UP
Curtis Mayfield was a soul and R&B singer-songwriter from Chicago who was very influential during the Civil Rights Movement of the fifties and sixties. Mayfield’s most famous song is probably 1964’s “Keep on Pushing” which he wrote and recorded while a member of the Impressions.

50. Weather line : ISOBAR
An isobar is a line on a weather map connecting points of equal barometric pressure.

51. Not laid-back : TYPE A
The Type A and Type B personality theory originated in the fifties. Back then, individuals were labelled as Type A in order to emphasize a perceived increased risk of heart disease. Type A personality types are so called “stress junkies”, whereas Type B types are relaxed and laid back. But there doesn’t seem to be much scientific evidence to support the linkage between the Type A personality and heart problems.

52. Lacking Verizon coverage, maybe : RURAL
GTE was a rival to AT&T, the largest of the independent competitors to the Bell System. GTE merged with Bell Atlantic in 2000 to form the company that we know today as Verizon.

C-3PO, Threepio for short, is the “protocol droid” that appears in all six “Star Wars” movies.

59. Group with the hit 1978 album “The Album” : ABBA
I am an unapologetic fan of ABBA’s music. ABBA was of course the Swedish group who topped the charts in the seventies and eighties. The name ABBA is an acronym formed from the first letters of the given names of each of the band members, namely: Agnetha, Benny, Bjorn and Anni-Frid.