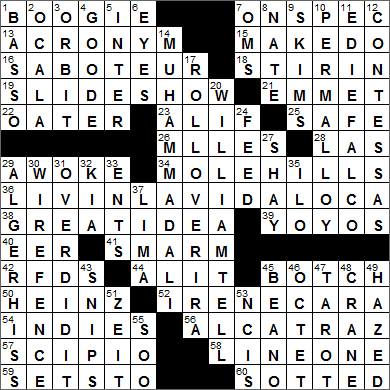 Today’s Wiki-est, Amazonian Googlies
Across
13. Laser or radar : ACRONYM
Strictly speaking, words formed from the first letters or other words are known as “initialisms”. Examples would be FBI and NBC, where the initials are spoken by sounding out each letter. Certain initialisms are pronounced as words in their own right, such as NATO and AWOL, and are called “acronyms”. So, acronyms are a subset of initialisms. As I say, that’s “strictly speaking”, so please don’t write in …

Scientists have been using radio waves to detect the presence of objects since the late 1800s, but it was the demands of WWII that accelerated the practical application of the technology. The British called their system RDF standing for Range and Direction Finding. The system used by the US Navy was called Radio Detection And Ranging, which was shortened to the acronym RADAR.

16. 1942 Hitchcock thriller : SABOTEUR
“Saboteur” is a 1942 Hitchcock film, a spy movie starring Robert Cummings. Hitchcock had made a film with a similar title six years earlier in 1936, called “Sabotage”.

21. ___ Brickowski (“The Lego Movie” protagonist) : EMMET
“The LEGO Movie” is a 2014 computer animated film in which all the characters are Lego figures. Apparently “The Lego Movie” was well received, and there’s already a sequel in the works.

22. Movie genre parodied in 2011’s “Rango” : OATER
The term “oater” that is used for a western movie comes from the number of horses seen, as horses love oats!

“Rango” is a 2011 animated feature film starring the voice of Johnny Depp. The anti-smoking organization known as Breathe California labelled “Rango” as a public health hazard because of 60 instances of smoking in the movie.

23. Arabic leader? : ALIF
“Alif” is the first letter in the Arabic Semitic alphabet, equivalent to the Hebrew “aleph”.

26. Misses in Marseille: Abbr. : MLLES
Señorita (Srta.) is Spanish and mademoiselle (Mlle.) is French for “Miss”.

34. Small issues, metaphorically : MOLEHILLS
Mountains made out of molehills …

36. Ricky Martin hit sung by Puss in Boots and Donkey at the end of “Shrek 2” : LIVIN’ LA VIDA LOCA
“Livin’ La Vida Loca” is a 1999 single recorded by Ricky Martin, the title of which translates as “living the crazy life”.

Before “Shrek” was a successful movie franchise and Broadway musical, it was a children’s picture book called “Shrek!” authored and illustrated by William Steig. The title “Shrek!” came from the German/Yiddish word Schreck, meaning “fear” or “terror”.

41. Unction : SMARM
“Unction” is another term for “anointing”. The literal sense has been extended to the figurative usage of “smarm, superficial and earnest language”

42. Country addresses: Abbr. : RFDS
Rural Free Delivery (RFD) was started in the US in 1891. Prior to RFD, rural Americans had to travel to the nearest post office to pick up their mail.

50. The Steelers’ ___ Field : HEINZ
Heinz Stadium in Pittsburgh is home to the Pittsburgh Steelers of the NFL and the University of Pittsburgh Panthers football team. The stadium opened in 2001 and has been sold out for every Steelers home game since.

52. Actress of “Fame” fame : IRENE CARA
Irene Cara (as well as acting in “Fame”) sang the theme songs to the hit movies “Fame” and “Flashdance”.

56. Pen that’s no longer used : ALCATRAZ
Alcatraz Federal Penitentiary was a maximum high-security prison operating from 1934 to 1963 on Alcatraz Island in San Francisco Bay. The US Army had opened Fort Alcatraz on the island back in 1859, and constructed the first prison there in 1868. The first buildings that were to become the Federal Penitentiary were erected between 1910 and 1912, and again were used as a military prison. The construction was modernized and became the Alcatraz Federal Penitentiary in 1934. The Federal prison housed famous inmates like Al Capone, The Birdman of Alcatraz and “Machine Gun” Kelly. The prison was closed in 1963 by Attorney General Robert Kennedy, as the cost of operation was excessively high and major capital improvements were needed.

60. Blotto : SOTTED
Our word “sot” comes from the Old English “sott”, meaning a fool. The term “sot” started to be associated with alcohol and not just foolery in the late 1500s.

Down
1. Boito’s Mefistofele, e.g. : BASSO
Arrigo Boito was an Italian poet and librettist who completed one opera of his own (“Mefistofele”) and who left one other opera partially complete called “Nerone”.

2. City between Citrus Springs and Silver Springs : OCALA
The city of Ocala, Florida was founded near a historic village with the same name. In the local Timucua language “Ocala” means “Big Hammock”. Back in the 1890s, Ocala was famous for its oranges, with over one third of that fruit shipped from Florida coming from the city. Also, thoroughbred horse farming in Florida started in Ocala, back in 1943. Some folks today call Ocala the “Horse Capital of the World”, but I bet that’s disputed by others …

3. Trident alternative : ORBIT
Orbit is a sugarless gum made by Wrigley’s. Orbit was first introduced during WWII, but was taken off the shelves in the 1980s when there was a concern that the gum’s sweetener was carcinogenic. Orbit was relaunched in 2001.

Trident chewing gum was introduced in 1960, and was marketed as a gum that aided in dental health. The original formula included three enzymes that were thought to soften dental tartar. This trio of enzymes gave rise to the name “Trident”.

6. Peer group? : EYES
One’s eyes are a group of two organs that peer all around.

7. Yogi’s utterances : OMS
“Om” is a sacred mystic word from the Hindu tradition. “Om” is sometimes used as a mantra, a focus for the mind in meditation.

A yogi is a practitioner of yoga. In the West we tend to think of yoga as a physical discipline, a means of exercise that uses specific poses to stretch and strengthen muscles. While it is true that the ancient Indian practice of yoga does involve such physical discipline, the corporeal aspect of the practice plays a relatively small part in the whole philosophy. Other major components are meditation, ethical behavior, breathing and contemplation.

8. ___ the Great of children’s literature : NATE
The “Nate the Great” series of children’s novels was written (mainly) by Marjorie Sharmat. Nate is like a young Sherlock Holmes, with a dog for a sidekick called Sludge. Some of the books have been adapted for television.

10. Magnetizable nickel-iron combo : PERMALLOY
Permalloy is an alloy that was invented in 1914. The alloy comprises 20% iron and 80% nickel is noted for for a high magnetic permeability. This means that permalloy is easily magnetized when a magnetic field is applied. As a result, permalloy is commonly used as a magnetic core in electrical equipment, and also as a magnetic shield.

11. “Nurse Jackie” actress : EDIE FALCO
“Nurse Jackie” is a comedy-drama series centered on an emergency room nurse at a hospital in New York City. The lead character is played by Edie Falco, who also played Tony Soprano’s wife on the “The Sopranos”.

14. Who said “My only fault is that I don’t realize how great I really am” : MUHAMMAD ALI
Muhammad Ali won 56 professional fights, 37 of which were knockouts. He lost 5 fights, 4 being decisions and one being a technical knockout (TKO). The TKO-loss was Ali’s second-last fight, against Larry Holmes. By the time Ali took on Holmes, he was already showing signs of Parkinson’s Syndrome, although the diagnosis would not come until four years later. Ali turned out for his last two fights largely because he needed the money. A sad end to a career, I’d say …

17. Investment option after leaving a job : ROLLOVER IRA
A rollover IRA is a subtype of a traditional Individual Retirement Account (IRA). The funds for a rollover IRA come from another qualified plan such as a 401(k) or a 403(b) account.

20. Rossini’s final opera : WILLIAM TELL
“Guillaume Tell” is an opera by Gioachino Rossini based on the legend of William Tell. It is actually Rossini’s last opera, and is certainly the Rossini opera with the most recognizable overture. The whole of the overture is superb, but the driving finale is widely recognized as the theme from the television show “The Lone Ranger”.

27. Horse-drawn vehicle : SHAY
A chaise is a light carriage with a folding hood that transports one or two people. “Chaise” is the French for “chair”, and takes its name from the “sedan chair” means of transportation. In the US, the name “chaise” evolved into “shay”.

29. Red Scare target : ALGER HISS
Alger Hiss was US government official involved in the establishment of the United Nations. Hiss was accused of being a spy in testimony to the House Committee on Un-American Activities (HUAC) in 1948. Hiss vigorously denied and fought the accusation but eventually served over three years in jail on related charges. The consensus seems to be that Hiss was indeed a spy, but there may be new evidence available when the HUAC’s papers are unsealed in 2026.

32. Maker of the Optima : KIA
The Kia Optima was sold for a while in Canada and Europe as the Kia Magentis.

35. U.N. agcy. created by the Treaty of Versailles : ILO
The ILO (International Labour Organization) is an agency now administered by the UN which was established by the League of Nations after WWI. The ILO deals with important issues such as health and safety, discrimination, child labor and forced labor. The organization was recognized for its work in 1969 when it was awarded the Nobel Peace Prize.

The 1919 Treaty of Versailles ended the war between Germany and the Allied Powers, and was the most significant treaty signed at the end of WWI. The war itself ended in November of 1918, but it took six months of negotiations at a peace conference in Paris to hammer out a peace treaty. The treaty called for reparations to paid by Germany to the Allies, an amount so heavy that it could have taken Germany until the 1980s to settle the debt in full. As it turned out, the agreement was not honored consistently by Germany, and when Adolf Hitler came to power, reparation payments were halted altogether.

45. Gas-X competitor : BEANO
Beano is a dietary supplement that is used to reduce gas in the digestive tract. Beano contains an enzyme which breaks down complex sugars found in many vegetables. This makes the food more digestible and apparently cuts down on gas.

Gas-X is a trade name for the anti-foaming agent called simethicone. Simethicone causes small gas bubbles in the stomach to combine into larger bubbles that can then be “burped” more easily.

51. Time, in Germany : ZEIT
“Zeit” is the German word for “time”, as in “zeitgeist”, the word imported into English meaning “the spirit of the times”.

53. CBS drama set in D.C. : NCIS
NCIS is the Naval Criminal Investigative Service, which investigates crimes in the U.S. Navy and Marine Corps. The service gives its name to the CBS TV show “NCIS”, a spin-off drama from “JAG” in which the main “NCIS” characters were first introduced. The big star in “NCIS” is the actor Mark Harmon.

55. ___ Locks (Great Lakes connectors) : SOO
In the summer of 2010 I spent a very interesting afternoon watching ships make their way through the Soo Locks and Soo Canals between Lake Superior and the lower Great lakes. The name “Soo” comes from the US and Canadian cities on either side of the locks, both called Sault Ste. Marie.