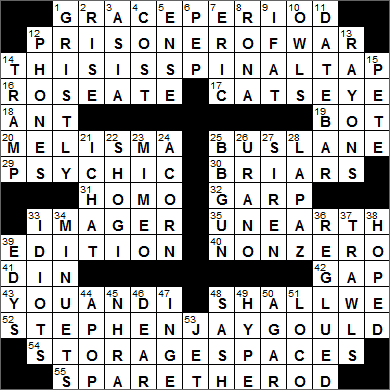 Today’s Wiki-est, Amazonian Googlies
Across
12. Jean-Paul Sartre or Winston Churchill, once : PRISONER OF WAR
Jean-Paul Sartre was a leading French philosopher, as well as a writer and political activist. He also served with the French army during WWII and spent nine months as a prisoner of war having been captured by German troops. Sartre was one of the few people to have been awarded a Nobel Prize and to have then refused to accept it. He was named winner of the prize for Literature in 1964, for his first novel “Nausea”. Before his win, Sartre knew that his name was on the list of nominees so he wrote to the Nobel Institute and asked to be withdrawn from consideration. The letter somehow went unread, so he found himself having to refuse the award after he had been selected.

Winston Churchill worked as a war correspondent during the Second Boer War. After only a few weeks in the front lines, he was captured with British troops while traveling in an armoured train. Churchill was imprisoned in a POW camp in Pretoria. He managed to escape and traveled almost 300 miles to safety. Reports of his escape led to churchill becoming somewhat of a hero back in Britain.

14. Classic 1984 film in which most of the dialogue was ad-libbed : THIS IS SPINAL TAP
“This Is Spın̈al Tap” is a rock musical mockumentary about the fictional band Spinal Tap, directed by the great Rob Reiner. I love Rob Reiner’s work, but this movie … not so much …

16. Pink : ROSEATE
Something roseate is “rose colored”, like rose colored glass, and hence also refers to something that is optimistic, perhaps overly so.

17. Certain shooter : CAT’S EYE
A “cat’s eye” is a type of marble, sometimes used as a shooter in the game. A cat’s eye marble is made from glass, with a colored insert that resembles a real cat’s eye.

19. Google worker : BOT
A bot is computer program that is designed to imitate human behavior. It might “crawl” around the Web doing searches for example, or it might participate in discussions in chat rooms by giving pre-programmed responses. It might also act as a competitor in a computer game.

20. Musical phrase in which a single syllable is sung over several notes : MELISMA
Melisma is the singing of a single syllable in a word while moving through a succession of single notes. A classical example of the technique is in the Christmas carol “Angels We Have Heard on High”, in which the “o” in the word “gloria” is sung to a string of 16 notes. The technique is used in popular songs a lot from the eighties and nineties. I’m not generally a fan of singers who do the melisma “thing”, to be honest …

30. Rabbit homes, maybe : BRIARS
“Briar” is a generic name for several plants that have thorns, including the rose. Famously, Br’er Rabbit lives in a “briar patch”.

31. Group of people : HOMO
The Homo genus includes the species Homo sapiens (modern humans), but we’re the only species left in that genus. The last known species related to humans was Homo neanderthalensis (Neanderthal Man) which died off about 24,000 years ago. However, another species was discovered in Indonesia in 2003 that has been dubbed Homo floresiensis (Flores Man … sometimes called “hobbit”), and it may possibly have lived as recently as 12,000 years ago. Watch this space …

52. Evolutionary biologist who wrote “The Panda’s Thumb” : STEPHEN JAY GOULD
Stephen Jay Gould was an influential writer of popular science, but also a respected paleontologist and evolutionary biologist. Gould developed the theory of punctuated equilibrium with biologist Niles Eldredge. The theory suggests that evolution is not a gradual process, but rather takes place in spurts. Species have stable characteristics for long periods, with evolutionary branches taking place very rarely.

Down
3. Where the “tiger cub economies” are : ASIA
The Four Asian Tiger economies are Hong Kong, Singapore, South Korea and Taiwan. The Tiger Cub Economies are the economies of Indonesia, Malaysia, the Philippine and Thailand.

5. First word in Massachusetts’ motto : ENSE
The motto of the Commonwealth of Massachusetts is “Ense petit placidam sub libertate quietem”, a Latin phrase that can be translated as “By the sword we seek peace, but peace only under liberty”. The quotation is from a passage written by English politician Algernon Sidney who was executed for treason by King Charles II.

7. “True Blood” vampire Northman : ERIC
“True Blood” is a television drama made by HBO. The series is based on novels written by Charlaine Harris that describe human and vampires who co-exist in a small town in Louisiana. I don’t do vampires …

8. First name in gossip : RONA
Rona Barrett is a gossip columnist originally from New York City but who plies her trade in Southern California. Barrett started out as with a gossip column that was syndicated in newspapers but then made a successful transition to television. She made regular appearances in news broadcasts and on her entertainment shows in the sixties and seventies.

11. Relative of a Fig Newton : DATE BAR
The Fig Newton is based on what is actually a very old recipe that dates back to Ancient Egypt. Whereas we grew up with “Fig Rolls” in Ireland, here in America the brand name “Fig Newton” was used, named after the town of Newton, Massachusetts where they were first produced.

13. Some old-fashioned hosiery : RAYONS
Rayon is a little unusual in the textile industry in that it is not truly a synthetic fiber, but nor can it be called a natural fiber. Rayon is produced from naturally occurring cellulose that is dissolved and then reformed into fibers.

14. Galumph : TRAMP
To galumph is to prance about, somewhat smugly. The word is an invention of Lewis Carroll and he used it in his famous nonsense poem “Jabberwocky”. Apparently he arrived at “galumph” by blending the words “gallop” and “triumph”.

15. Colleague of Don on “Mad Men” : PETE
On the AMC hit “Mad Men”, the character Pete Campbell is an ambitious account executive who works with Don Draper and Peggy Olson. Campbell is played by Vincent Kartheiser, Draper by Jon Hamm and Olson by Elizabeth Moss. For my money, Moss is the star of the whole show …

21. Apple messaging software : ICHAT
iChat was introduced in 2002, and is still in use today. It is Apple’s “instant messaging” application that integrates with the Mac Operating System.

22. So-called Japanese chess : SHOGI
“Shogi” is a game that is also known as Japanese Chess. The name “shogi” translates as “general’s board game”.

23. Photocopy predecessor : MIMEO
A mimeograph (also “mimeo”) is a cheap printing press that applies ink to paper through a stencil wrapped around a rotating drum. Mimeographs are still around, but have largely been replaced by offset printers and photocopiers.

25. Certain shooter : BB GUN
A BB gun is an air pistol or rifle that shoots birdshot known as BBs. Birdshot comes in a number of different sizes, from size 9 (0.080″ in diameter) to size FF (.23″). 0.180″ diameter birdshot is size BB, which gives the airgun its name.

27. Frequent demonstrator of the Doppler effect : SIREN
The Doppler effect is the change in frequency of a sound experienced by an observer when the source of the sound is moving nearer or further away. The effect was proposed by Austrian physicist Christian Doppler in 1842.

28. Setting for Steinbeck’s “The Pearl” : LA PAZ
La Paz is the capital city of the state of Baja California Sur in Mexico.

34. Dances in 3/4 time : MINUETS
A minuet is a dance that originated in France. At some point, the middle section of the minuet was routinely scored for just a trio of instruments. The resulting composition was known as a minuet and trio, and in the Classical Era was commonly chosen as the third movement of a symphony.

39. Nestlé brand : EDY’S
Dreyers’ ice cream sells its products under the name Dreyers in the Western United States, and Edy’s in the Eastern states. The company’s founders were William Dryer and Joseph Edy.

Nestlé is the world’s largest food company. It was founded in 1905 in Vevey, Switzerland where the company headquarters is to this day. Although the company came into being as the result of a merger, it retains the name of one of the co-founders, German confectioner Henri Nestlé. Henri Nestlé’s real breakthrough product was baby formula.

Back in the 18th century “drag” was slang for a wagon or buggy, as it was “dragged” along by a horse or horses. In the 1930s, the underworld adopted drag as slang for an automobile. This sense of the word was imported into automobile racing in the forties, giving the name to “drag racing”. A drag race is basically a competition between two cars to determine which can accelerate faster from a standstill.

Playwright William Inge had a run of success on Broadway in the early fifties. Inge’s most celebrated work of that time was the play “Picnic”, for which he was awarded a Pulitzer Prize. The original 1953 cast of “Picnic” included a young male actor making his debut on Broadway. His name was Paul Newman. Many of Inge’s works are set in the American heartland and so he became known as the “Playwright of the Midwest”.

50. Culture medium : AGAR
Agar (also “agar-agar”) is a jelly extracted from seaweed that has many uses. Agar is found in Japanese desserts, and can also be used as a food thickener or even as a laxative. In the world of science it is the most common medium used for growing bacteria in Petri dishes.

53. Blacker than black : JET
The color “jet black” takes its name from the minor gemstone known as jet. The gemstone and the material it is made of takes its English name from the French name: “jaiet”.