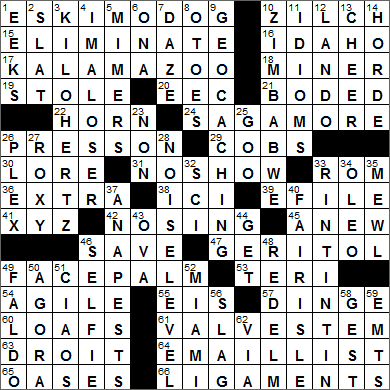 Today’s Wiki-est, Amazonian Googlies
Across
1. Inuit companion : ESKIMO DOG
Although still used in the US, the term “Eskimo” tends to be avoided in Canada and Greenland as there it is considered pejorative.

10. Nothin’ : ZILCH
We use the term “zilch” to mean “nothing”. Our current usage evolved in the sixties, before which the term was used to describe “meaningless speech”. There was a comic character called Mr. Zilch in the 1930s in “Ballyhoo” magazine. Mr. Zilch’s name probably came from the American college slang “Joe Zilch” that was used in the early 1900s for “an insignificant person”.

17. Starting point of a train trip to Timbuktu, in song : KALAMAZOO
“Kalamazoo to Timbuktu” is a 1951 song:
There’s a train by the station

In Kalamazoo
And it soon will be leaving
On track number two
I heard the conductor say
It’s going a long long way
It’s going all the way
From Kalamazoo To Timbuktu.

20. Former trade union, for short : EEC
The European Economic Community (EEC) was also called “the Common Market”. The EEC was a NAFTA-like structure that was eventually absorbed into today’s European Union.

24. ___ Hill, historic home of Theodore Roosevelt : SAGAMORE
President Theodore Roosevelt and his wife Edith lived much of their lives in a 22-room mansion near Oyster Bay on the north shore of Long Island, New York. Sagamore Hill was also known as the “Summer White House” in the years that President Roosevelt was in office.

33. E.U. member since ’07 : ROM
Romania sits just east of Hungary and north of Bulgaria in Europe. Romania was formed from the union of two principalities in 1859, Moldavia and Wallachia. The Kingdom of Romania grew larger in size after WWI with the addition of three new regions, including the “vampirish” Transylvania. After the collapse of the Soviet Union, the nation developed stronger ties with the West. Romania joined NATO in 2004 and the EU in 2007.

46. Credit to a reliever : SAVE
In baseball, a relief pitcher is focused on saves.

47. Tonic for “tired blood” : GERITOL
The “Geritol” brand name was very carefully chosen at the time it was introduced, in 1950, to suggest that it is efficacious for us as we move on in years. In general, the formula has always featured iron and several B-complex vitamins. Geritol ran afoul of the Federal Trade Commission (FTC) in the early sixties due to its claims that it is effective in relieving tiredness, regardless of the cause. In 1965, the company was instructed by the FTC to make it clear in its advertising that Geritol’s formula is only effective in relieving tiredness in individuals suffering from anemia (a lack of iron).

53. Polo of TV’s “The Fosters” : TERI
Teri Polo’s most prominent role on the big screen was Pam Focker in “Meet the Fockers” and its sequel. Pam is the wife of the character played by Ben Stiller. Polo also played the wife of Presidential candidate Matt Santos in “The West Wing”.

64. Phishing fodder : EMAIL LIST
Phishing is the name given to the online practice of stealing usernames, passwords and credit card details by creating a site that deceptively looks reliable and trustworthy. Phishers often send out safe-looking emails or instant messages that direct someone to an equally safe-looking website where the person might inadvertently enter sensitive information. “Phishing” is a play on the word “fishing”, as in “fishing for passwords, PIN numbers etc.”

65. Retreats from the heat : OASES
The most famous oasis in the US is Las Vegas, in the middle of the Mojave Desert.

66. Hip bands : LIGAMENTS
A ligament is a band of tissue that connects bones. Ligaments are similar to tendons and fasciae. Tendons connect muscle to bone, and fasciae connect muscles to other muscles.

Down
2. Blind spot? : SLAT
A blind in a window is often composed of slats.

3. Measure of a radio band : KILOHERTZ
The unit of frequency measure is the hertz (Hz), the number of cycles per second of a periodic phenomenon.

4. Beatles song with the line “My tears are falling like rain from the sky” : I‘M A LOSER
The Beatles song “I’m a Loser” first appeared on the “Beatles for Sale” album in 1964. The first pressing of the album listed the song’s title as “I’m a Losser”. If you have one of those records, I’d say it’s worth a pretty penny …

8. Onetime dwellers along the Big Blue River : OTOES
The Big Blue River runs from central Nebraska into Kansas where is becomes the largest tributary of the Kansas River. “Big Blue” comes from the name given to it by the Kansa people: the Great Blue Earth River.

9. Coordinated activity? : GEOCACHING
Geocaching is a game rather like “hide and seek” that is played outdoors using hi-tech equipment. The idea is that someone places a waterproof container in a specific location with known GPS coordinates. The container has a logbook inside, so that players who find the “cache” can record their discovery along with any notes of interest. The location of the container is listed on special sites on the Internet for anyone to access. You can check out caches near you at www.geocaching.com. You will probably be surprised at how many there are! I know I was …

10. Country with the most official languages (16) : ZIMBABWE
The country now known as Zimbabwe started out as a British colony called Southern Rhodesia, named after Cecil Rhodes the British empire builder. Zimbabwe has 16 official languages, the most of any nation. The most common are English, Shona and Ndebele.

14. Huns by the hundreds, say : HORDE
A “horde” is a large crowd. “Horde” ultimately derives from the Turkish “ordu” that means “camp, army”.

27. Theater name : ROXY
The original Roxy Theater was opened in 1927 in New York City, designed to be the biggest and best “motion picture palace” of the day. The first theater operator was a professional, Samuel Rothafel. As part of the deal to entice him to take the job, the owners offered to name the theater after him. As Rothafel’s nickname was Roxy, that’s the name they used.

33. Shepherd of old movies : RIN TIN TIN
The original Rin Tin Tin was a real-life dog, a puppy discovered by a GI in a bombed-out kennel in France during WWI. The soldier named the pup Rin Tin Tin, the same name as a puppet given to American soldiers for luck. On returning to the US, “Rinty” was trained by his owner and was spotted doing tricks by a film producer. Rinty featured in some films, eventually getting his first starring role in 1923 in the silent movie “Where the North Begins”. Legend has it that this first Rin Tin Tin died in the arms of actress Jean Harlow. Not a bad way to go …

34. Imperial bars? : OLEO
Imperial is a brand of margarine from Unilever. Famously, the marketing folks ran TV ads in which anyone eating Imperial margarine had a crown appear on his or her head out of thin air.

37. Kin of iambs : ANAPESTS
Anapest is the name given to a metrical foot in poetry, one in which two unstressed syllables are followed by a stressed one. Indeed, the name “anapest” is a good example, when pronounced an-a-pest. Here is a better example of a verse using anapest, so let’s all say it out loud together! “‘Twas the night before Christmas and all through the house”.

40. Shetland sweater style : FAIR ISLE
Fair Isle is a small island in the north of Scotland, one of the Shetlands. The island gives its name to a knitting technique that produces a geometrical pattern using several colored yarns. I’m very fond of Fair Isle sweaters, I must say …

46. Many a Snapchat snap : SELFIE
Snapchat is a messaging system that allows users to send photos and video clips to a limited list of recipients. The photos and clips, called “snaps”, can be viewed for only a few seconds before they are deleted from the recipient’s device and from the Snapchat servers.

48. Crate and barrel wood : RED ELM
The Slippery Elm is a species of elm native to North America that is also known as the Red Elm. The inner bark of the slippery elm can used in a medicinal tea. Elm bark tea is said to ease a sore throat or irritated stomach.

49. One of only three winners of consecutive Masters : FALDO
Nick Faldo is an English golfer, a winner of six major tournaments and a former World No. 1. For some years now Faldo has been the lead golf analyst for CBS Sports. In 2009 he was knighted by Queen Elizabeth II, so if you’re chatting with him, don’t forget to address him as Sir Nick …

50. Spartan hangout : AGORA
In early Greece the “agora” was a place of assembly. Often the assemblies held there were quite formal, perhaps for the reading of a proclamation. Later in Greek history, things became less formal as the agora evolved into a market place. Our contemporary word “agoraphobia” comes from these agorae, in the sense that an agoraphobe has a fear of open spaces, a fear of “public meeting places”.

Sparta was a city-state in ancient Greece, famous for her military might. Spartan children had a tough upbringing, and newborn babies were bathed in wine to see if the child was strong enough to survive. Every child was presented to a council of elders that decided if the baby was suitable for rearing. Those children deemed too puny were executed by tossing them into a chasm. We’ve been using the term “spartan” to describe something self-disciplined or austere since the 1600s.

56. Filaments in wrought iron : SLAG
Wrought iron is an iron alloy containing fibrous filaments called slag. The term “wrought” is a allusion to the iron being worked (wrought) by hand. One of the more famous uses of wrought iron was the construction of the Eiffel Tower in Paris.

58. Knight-time story : GEST
Our word “gest” meaning a great deed or an exploit has been around since about 1300, and comes from the Old French word “geste” meaning the same thing. These days “geste” can also mean “gesture”.

“Triage” is the process of prioritizing patients for treatment, especially on a battlefield. The term “triage” is a French noun that translates as “sorting”.