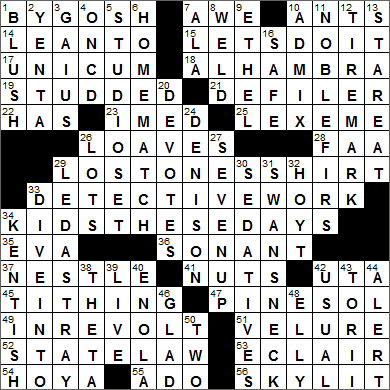 Today’s Wiki-est, Amazonian Googlies
Across
17. Hungarian liqueur sold in green bottles : UNICUM
Unicum is a herbal liqueur from Hungary that is usually drink before or after a meal. The list of over forty herbs used in the beverage’s production is kept a closely guarded secret.

18. Ancient Moorish palace in Granada : ALHAMBRA
Alhambra is a magnificent fortress and palace in Granada, Andalusia in the south of Spain. The large complex was completed in the 14th century in the days when the Moors ruled Andalusia.

21. Vandal, e.g. : DEFILER
A “vandal” is someone who destroys some beautiful or valuable. The term comes from the Germanic tribe called the Vandals who sacked Rome in the year 455. Our contemporary term “vandalism” was coined by Henri Grégoire in 1794, when he was describing the destruction of artwork during the French Revolution.

23. Reached quickly, quickly? : IMED
One might reach someone quickly by sending an instant message, and “instant message” is written quickly using the abbreviation “IM”.

Even though instant messaging (sending IMs) has been around since the 1960s, it was AOL who popularized the term “instant message” in the eighties and nineties.

25. Meaningful language unit : LEXEME
“Lexeme” is a term from linguistics. A lexeme is a fundamental unit in a language, a set of forms of a particular word e.g. the lexeme “find” contains the forms “find, finds, found, finding.”

28. Radar-using org. : FAA
The Federal Aviation Administration (FAA) was set up in 1958 (as the Federal Aviation Agency). The agency was established at that particular time largely in response to an increasing number of midair collisions. The worst of these disasters had taken place two years earlier over the Grand Canyon, a crash between two commercial passenger airplanes that resulted in 128 fatalities.

29. Flamed out at a casino, say : LOST ONE’S SHIRT
The “casino” originated in the 1700s, first describing a public room for music or dancing. The name “casino” is a diminutive of “casa” meaning “house”.

35. Green on the screen : EVA
Despite the English sounding name, Eva Green is a French actress. Green played Bond girl Vesper Lynd in the 2006 movie “Casino Royale”, opposite Daniel Craig.

36. Voiced, in phonetics : SONANT
In phonetics, a sonant consonant is one that is voiced, as opposed to a surd constant, which is not.

37. Crunch producer : NESTLE
The Nestlé Crunch candy bar was introduced way back in 1937.

45. Requirement of Mormonism : TITHING
A tithe is a traditional payment of one tenth of a person’s annual income and is usually given to a church. Tithing is a practice taught in many traditions, and according to a 2002 survey, about 3% of American adults donate 10% or more of their income to a church.

47. Fragrant Clorox brand : PINE-SOL
Pine-Sol first came on the market in 1929, and is a cleaner based on pine oil.

51. Cushiony fabric : VELURE
Velour (also “velure”) is a plush, knitted textile traditionally made from cotton. Velour has the feel of velvet combined with the stretchiness of a knit fabric.

53. Food item whose name means, literally, “lightning” : ECLAIR
The name for the pastry known as an éclair is clearly French in origin. The French word for lightning is “éclair”, but no one seems to be too sure how it came to be used for the rather delicious bakery item.

54. Washington athlete : HOYA
The athletic teams of Georgetown University are known as the Hoyas. The name is derived from “Hoya Saxa”, a traditional cheer yelled out at Georgetown games as far back as 1893. The term is a mixture of Greek and Latin, with the Greek word “hoya” meaning “such” or “what”, and “saxa” translating from Latin as “rocks” or “small stones”. The cheer is usually rendered in English as “what rocks!”.

56. Like an atrium : SKYLIT
In modern architecture an atrium (plural “atria” or “atriums”) is a large open space usually in the center of a building and extending upwards to the roof. The original atrium was an open court in the center of an Ancient Roman house. One could access most of the enclosed rooms of the house from the atrium.

Down
2. Person who might ask “Did you hear …?” : YENTA
Yenta (also “Yente”) is actually a female Yiddish name. In Yiddish theater “yenta” came to mean a busybody.

3. Given name of Augustus and Caligula : GAIUS
Gaius Octavius Thurinus (often called Octavian) was the adopted son of Gaius Julius Caesar. After Julius Caesar was assassinated, Octavian came to power in Rome and teamed up with Mark Antony and Marcus Aemilius Lepidus in what was called the Second Triumvirate. When the triumvirate fell apart, especially after Antony’s defeat at Actium, Octavian became more powerful within the Roman Republic. Several years later he wrested sufficient power from the Roman Senate to end the Republic and begin the Roman Empire. As the first Emperor of Rome, Octavian was given the name Caesar Augustus. The month of August, originally called “Sextilis” in Latin, was renamed in honor of Augustus.

11. Popular Christmas trees : NOBLE FIRS
The noble fir is also known as red fir, and even “Christmastree” as it is a popular choice for decoration during the December holiday.

16. First or second call, maybe : SAFE!
An umpire might call “safe!” at one of the bases, say first or second.

24. Ohio university nicknamed “Big Red” : DENISON
Denison University is a private school in Granville, which is just east of Columbus, Ohio. Denison was founded in 1831 as a Baptist college called the Granville Literary and Theological Institution. The name was changed in recognition of a $10,000 donation by a wealthy farmer named William S. Denison.

27. Card game also known as high-low-jack : SEVEN UP
All Fours is a trick-taking card game that is also known as High-Low-Jack or Seven Up. It is one of the oldest games in England, dating back at least to the 17th century.

32. Folk singer ___ Axton : HOYT
Hoyt Axton was a singer-songwriter best known for his folk-style songs. The Axton song most familiar to me is “Joy to the World”, which was a bit hit for Three Dog Night in 1971.

34. Dialect of SE England : KENTISH
Kent is a county in the southeast of England. Kent is a little unusual in that it shares a “land” border with France. That border nominally exists halfway through the Channel Tunnel, one end of which comes to surface in the Kent port of Folkestone.

38. Certain sorority member : THETA
The Greek letter theta is the one that looks like a number zero with a horizontal line in the middle.

48. ___ May Clampett of old TV : ELLY
Elly May Clampett was played by Donna Douglas on the sixties television show “The Beverly Hillbillies”. Douglas is best known on the big screen for playing the lead opposite Elvis Presley in 1966’s “Frankie and Johnny”.

50. Brace : TWO
A brace is a pair, as in a brace of game birds that have been killed for sport.