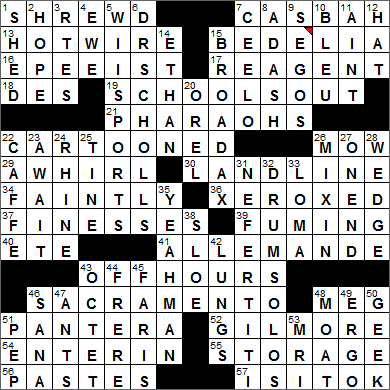 Today’s Wiki-est, Amazonian Googlies
Across
7. Foreign fortress : CASBAH
“Casbah” is the Arabic word for a citadel. The term usually refers to the citadel in the city of Algiers, and the area surrounding it.

13. Take for the road? : HOT-WIRE
To hot-wire a vehicle is to start it by bypassing the keyed ignition.

15. “Parenthood” actress Bonnie : BEDELIA
The actress Bonnie Bedelia is best perhaps for playing Holly McClane in the “Die Hard” series of movies (the wife of the character played by Bruce Willis). Bedelia is the aunt of the actor Macaulay Culkin, the child star of “Home Alone”.

16. Person making pointed attacks? : EPEEIST
The épée that is used in today’s sport fencing is derived from the old French dueling sword. In fact, the the sport of épée fencing is very similar to the dualing of the 19th century. The word “épée” translates from French as “sword”.

19. 1972 Alice Cooper hit with the lyric “we got no class” : SCHOOL’S OUT
“School’s Out” is a marvelous 1972 song written and recorded by Alice Cooper. While writing the song, Cooper was thinking about the greatest three minutes of one’s life. He came up with a choice between Christmas morning, getting ready to open presents, and the last day of school, waiting for the school bell to ring.

21. Line in the sand? : PHARAOHS
The pharaohs were the kings of Ancient Egypt. The term “pharaoh” translates as “great house”, and was originally the name of the king’s palace.

22. Worked for Mad, maybe : CARTOONED
“Mad” magazine has been around since 1952, although back them it was more of a comic book than a magazine. The original founder and editor was Harvey Kurtzman, and in order to convince him to stay, the publisher changed the format to a magazine in 1955, when the publication really took off in terms of popularity.

36. Not original, in a way : XEROXED
A xerox is a copy made on a xerograph machine. Xerography is a dry photocopying technique that was invented in 1938 by Chester Carlson, although he originally referred to the process as electrophotography. Joseph Wilson commercialized Carlson’s process some years later, coining the term “Xerography” using the Greek words for “dry” and “writing”. Wilson changed the name of his own photographic company to Xerox.

41. Baroque dance form : ALLEMANDE
An allemande is a dance that was very popular during the Baroque period. The dance evolved out of dances that were apparently favored in Germany during the Renaissance. “Allemande” is French for “German”.

46. Setting for TV’s “The Mentalist” : SACRAMENTO
“The Mentalist” is a police drama that has been airing on CBS since 2008. It’s all about a former psychic who now works as a consultant to the police. I have never watched it though …

48. Eldest sister in a classic 1868 novel : MEG
“Little Women” is a novel written by American author Louisa May Alcott. The quartet of little women is Meg, Jo, Beth and Amy March. Jo is a tomboy and the main character in the story, and is based on Alcott herself.

51. Heavy-metal band with the #1 album “Far Beyond Driven” : PANTERA
Pantera was a heavy metal band formed in 1981 by two brothers with the stage names of Vinnie Paul and Dimebag Darrell. The group disbanded in 2003. Any hopes for a reunion were dashed in 2004 when Dimebag Darrell was shot dead on stage by a deranged fan.

52. “___ Girls” : GILMORE
“Gilmore Girls” is a comedy show that originally aired from 2000 to 2007 on the WB. The title characters were a mother and daughter, played by Lauren Graham and Alexis Bledel.

54. Type, as a PIN : ENTER IN
One enters a Personal Identification Number (PIN) when using an Automated Teller Machine (ATM).

Desmond Tutu is a South African, a former Anglican bishop who is an outspoken opponent of apartheid. Tutu won the Nobel Peace Prize in 1984 and the Presidential Medal of Freedom in 2009, among other distinguished awards.

6. Sole supporter? : DR SCHOLL’S
William Scholl worked part time as a cobbler and then in a shoe retailer in Chicago. Noting that many people had similar foot problems he went to night school and qualified as a podiatrist in 1904. Soon after he started his own company making footcare products, giving us the brand name Dr. Scholl’s.

7. Singer Green : CEELO
CeeLo Green is the stage name of rapper Thomas DeCarlo Callaway. Apparently Green is one of the coaches for the contestants on the singing TV show “The Voice”. That’s all I need to know …

8. Not much, as of salt : A DASH
In cooking, a “dash” is a very small measure, one that is often undefined. However, you can in fact buy some measuring spoons that define not only a dash but also a “pinch” and a “smidgen”, as follows:

9. Mariposa relatives : SEGOS
The Sego Lily is the state flower of Utah, and is a perennial plant found throughout the Western United States.

14. Hawke of “Boyhood” : ETHAN
Ethan Hawke is a Hollywood actor who made his breakthrough in a supporting role in “Dead Poet’s Society”, playing opposite Robin Williams. Hawke was married to Uma Thurman, with whom he has two children.

“Boyhood” sounds like an interesting 2014 film about the coming-of-age of a young boy and his older sister. The film was actually shot over an 11-year period, so that the actors were seen to be growing up at the same time as the characters that they were playing. The critics loved this movie.

20. Ivan Turgenev’s birthplace : OREL
Orel (also Oryol) is a city lying on the Oka River, just over 200 miles SSW of Moscow. Orel was one of the cities occupied by Germany during WWII. It was liberated in 1943, but had been almost completely destroyed.

Ivan Turgenev was a Russian novelist and playwright. Turgenev’s most famous works are a collection of short stories called “A Sportsman’s Sketches” (1852) and the novel “Fathers and Sons” (1862).

The person who serves coffee in a coffee shop is often called a “barista”. “Barista” is the Italian for “bartender”.

31. Queen of the Nile : NEFERTITI
Nefertiti was the Great Royal Wife of the Egyptian Pharaoh Akhenaten. Nefertiti is relatively well-known in modern times largely due to a 3,300-year-old limestone bust that depicts her rather beautiful features. The painted bust was discovered by archaeologists in the sculptor’s workshop in 1912, and is on display in the Neues Museum in Berlin.

33. ___ Linda, Calif. : LOMA
Loma Linda is a city in California located not far from Los Angeles. The name Loma Linda translates from Spanish as “Beautiful Hill”.

38. Liqueur flavor : SLOE
The sloe is the fruit of the blackthorn bush, and the main flavoring ingredient in sloe gin.

44. ___ Jacques : FRERE
“Frère Jacques” is a children’s song from France. The French lyrics are:

45. Anna of the “Scary Movie” films : FARIS
I had no idea who Anna Faris was until I just looked her up online. It turns out that she is one of the stars in the sitcom “Mom”, alongside the fabulous Allison Janney. The funny thing is, I’m watching the show “Mom” while I type this …

“Scary Movie” is one of those parody movies, a film released in 2000 that pokes fun at famous horror films. It was advertised with the tagline “No mercy. No shame. No sequel”. The “no sequel” reference was a parody in itself, making fun of the fact that slasher movies in particular were made into strings of sequels. But there was in fact to be a sequel to “Scary Movie”, in fact three of them with one more on the way. “Scary Movie 2” came out in 2001, with the tagline “We lied”.

46. Capital near Aden : SANA
Sana (also Sanaa) is the capital city of Yemen. Within the bounds of today’s metropolis is the old fortified city of Sana, where people have lived for over 2,500 years. The Old City is now a World Heritage Site.

47. Myrmecologists’ study : ANTS
Myrmecology is the study of ants. The term derives from the Greek “myrmex” meaning “ant”.

48. Water under the bridge? : MOAT
A “moat” is a protective trench that surrounds a castle, say. The moat may or may not be filled with water.

50. Fanboy or fangirl : GEEK
Fanboys (and fangirls) are fans, but fans of a very specific subject in a particular field. So, someone might be a fan of home computing, but an Intel fanboy would have an enthusiasm for CPUs made by Intel. A fanzine (also “zine”) is a fan publication with a very limited circulation, dealing with a very specific subject matter. Fanzines are usually desktop published and distributed electronically or as photocopies.

53. Provider of inside info? : MRI
A CT (or “CAT”) scan produces (via computer manipulation) a three dimensional image of the inside of an object, usually the human body. It does so by taking a series of two dimensional x-ray images while rotating the camera around the patient. The issue with CT scans is that they use x-rays, and high doses of radiation can be harmful causing damage that is cumulative over time. An MRI on the other hand (Magnetic Resonance Imaging), uses powerful magnetic fields to generate its images so there is no exposure to ionizing radiation (such as X-rays). We used MRI equipment in our chemistry labs at school, way back in the days when the technology was still called Nuclear Magnetic Resonance Imaging (NMRI). Apparently the marketing folks didn’t like the term “nuclear” because of its association with atomic bombs, so now it’s just called MRI.