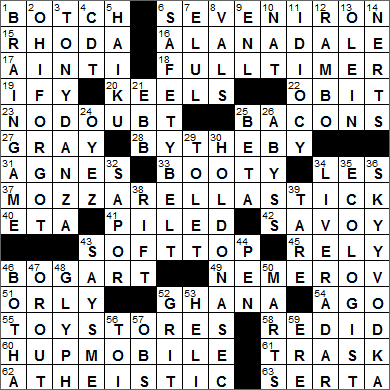 Today’s Wiki-est, Amazonian Googlies
Across
1. Bollix : BOTCH
“Bollix up” is a term absorbed from British English, and is yet another example of terms readily used here in the US that are considered very rude back in the UK. The term is used to mean “make a mess of”. “Bollix” is of Anglo-Saxon origin, a reference to “testicles”.

15. 1975 Golden Globe winner : RHODA
The seventies sitcom “Rhoda” was a spinoff of “The Mary Tyler Moore Show” that starred Valerie Harper. The eighth episode of the show was an hour-long special in which Rhoda married her fiance Joe (played by David Groh). At the time of airing it was the second-most watched television episode in history, second only to the 1953 birth of Little Ricky on “I Love Lucy”.

17. Marty Robbins’s “___ the Lucky One” : AIN’T I
Marty Robbins was a country singer-songwriter from a suburb of Phoenix, Arizona. Off the stage, Robbins was an avid fan of NASCAR and participated in quite a few races, with six finishes in the top ten.

22. Notice after the expiration date? : OBIT
The term “obituary” comes from the Latin “obituaris”, originally the record of the death of a person, although the literal meaning is “pertaining to death”.

25. ___ Rebellion (colonial uprising) : BACON’S
Nathaniel Bacon led an uprising in 1676 in the Virginia Colony. The uprising was remarkable in that poor whites and blacks united in opposition to the ruling class. The rebels were trying to drive Native Americans from Virginia.

27. Just for Men target : GRAY
Just for Men is a hair-coloring product. It is usually applied to remove gray in the hair, and is effective for one to six weeks. So they tell me …

31. Auntie Mame’s secretary : AGNES
“Auntie Mame” is a 1955 novel by Patrick Dennis that was adapted for the Broadway stage in 1958 with Rosalind Russell playing the title role. There is also a 1958 movie adaption that also stars Russell.

37. Munchie often dipped in marinara : MOZZARELLA STICK
Mozzarella is an Italian cheese that is prepared using a spinning and cutting technique. It is the cutting that gives the cheese its name, as “mozzare” means “to cut” in Italian.

Italians use the term “marinara” not for a sauce, but in the name of a recipe. For example, “spaghetti alla marinara” would be a spaghetti dish. The literal translation of the name of this dish would be “mariner’s spaghetti”. The sauce that we call “marinara” is called “salsa di pomodoro” in Italy.

42. Classic Harlem ballroom, with “the” : SAVOY
The Savoy Ballroom was a very popular dance spot in Harlem in New York city from the twenties to the fifties. In the days of “whites only” entertainment venues (like the “Cotton Club”), the Savoy was integrated, with white and black Americans dancing together.

43. Feature of many a convertible or Jeep : SOFT-TOP
The Jeep is the original off-road vehicle. It was developed by the American Bantam Car Company in 1940 at the request of the US government who recognized the upcoming need for the armed forces as American involvement in WWII loomed. The Bantam Company was too small to cope with demand, so the government gave the designs to competing car companies. The design and brand eventually ended up with AMC in the seventies and eighties.

49. Poet Howard who wrote “A Primer of the Daily Round” : NEMEROV
Howard Nemerov was a poet from New York City who was appointed as US Poet Laureate for two separate terms. He served from 1963-64 and again from 1988-90. Nemerov’s younger sister was famed photographer Diane Arbus (nee Nemerov).

51. Aéroports de Paris manages it : ORLY
Orly is on the outskirts of Paris, to the south of the city. It is home to the Paris-Orly Airport, the second busiest international airport for the city after the more recently built Charles de Gaulle Airport. That said, Orly is home to more domestic flights than Charles de Gaulle.

52. Kofi Annan’s home : GHANA
Kofi Annan is a diplomat from Ghana who served as General Secretary of the UN for ten years until the beginning of 2007. Annan was born into an aristocratic family, and had a twin sister named Efua Atta. Efua and Kofi shared the middle name “Atta”, which means “twin” in the Akan language of Ghana. Annan attended the MIT Sloan School of Management from 1971-72, and graduated with a Master of Science degree.

In his short life, James Dean starred in three great movies: “East of Eden”, “Rebel Without a Cause” and “Giant”, for which he received two posthumous Best Actor Oscar nominations (the only person to do so). On a fateful day in September 1955, Dean set off in Porsche for a race in Salinas, California. While driving to the race he was given a speeding ticket. Two hours later Dean was involved in a near head-on collision and was pronounced dead on arrival at a hospital in Paso Robles, California.

62. Eschewing a higher calling? : ATHEISTIC
The term “atheism”, meaning “disbelief in the existence of a god or gods”, comes from the Greek “atheos” meaning “without god”.

63. Maker of iComfort : SERTA
Serta was founded in 1931 when a group of 13 mattress manufacturers came together, essentially forming a cooperative. Today, the Serta company is owned by eight independent licensees in a similar arrangement.

Down
1. Crossword, e.g. : BRAIN GAME
It is generally accepted that the first crossword puzzle was published as a “Word-Cross” puzzle on December 21, 1913 in the “New York World”. The name “Word-Cross” was changed to “Cross-Word” a few weeks due to a mistake in the typesetting room. The name “crossword” has been used ever since. The “New York World” then started publishing the puzzles every week, and the idea was picked up by other newspapers. By 1920, crosswords were so popular that the New York Public Library reported difficulties in meeting the demand for access to dictionaries and encyclopedias.

3. Boxer-turned-sitcom star : TONY DANZA
The actor Tony Danza is noted for his roles in the TV shows “Taxi” and “Who’s the Boss?” Danza is from Brooklyn, New York and his real name is Antonio Iadanza. He was a professional boxer before his acting career took off.

The Minnesota Twins baseball team started out life as the Kansas City Blues in 1894, before becoming the Washington Senators in 1901. The team arrived in Minneapolis in 1961.

5. Traditional three-liner : HAIKU
A haiku is a very elegant form of Japanese verse. When writing a haiku in English we tend to impose the rule that the verse must contain 17 syllables. This restriction comes from the rule in Japanese that the verse must contain 17 sound units called “moras”, but moras and syllables aren’t the same thing. What the difference is though, is not so clear to me. Here’s an example of a Haiku:

7. Month in which Creation began, by tradition : ELUL
Elul is the month in the Hebrew calendar that occurs in August-September.

8. Triple-time dance, in Durango : VALS
“Vals” is Spanish for “waltz”.

10. Phillie foe : NAT
The Washington Nationals baseball team started out life as the Montreal Expos in 1969. The Expos moved to Washington in 2005 becoming the Nats. There are only two Major Leagues teams that have never played in a World Series, one being the Mariners and the other the Nats.

12. No wuss : RAMBO
A “rambo” is very violent and militant person. The term is relatively recent one, coming from the character John Rambo played by Sylvester Stallone in the “Rambo” series of movies. The first Rambo film made was “First Blood” in 1982. The film in turn is based on the 1972 novel of the same name by David Morrell.

13. Liquid part of fat : OLEIN
Triolein (also called “olein”) is a triglyceride, a liquid fat. Triolein is found in various amounts in most fats and oils. For example, olive oil can contain up to 30% triolein.

24. Cry for attention : OYEZ!
Town criers make public announcements on the streets, usually shouting “Oyez! Oyez! Oyez!” to attract attention. The term “oyez” derives from the Anglo-Norman word for “listen” and is used in this instance to mean “Hear ye!” “Oyez!” might also be used in a courtroom as the court’s proceedings are opened.

25. Test letter? : BETA
In the world of software development, the first tested issue of a new program is usually called the “alpha” version. Expected to have a lot of bugs that need to be fixed, the alpha release is usually distributed to a small number of testers. After reported bugs have been eliminated, the refined version is called a “beta” and is released to a wider audience, but with the program clearly labeled as “beta”. The users generally check functionality and report further bugs that are encountered. The beta version feeds into a release candidate, the version that is tested just prior to the software being sold into the market, bug-free. Yeah, right …

29. Flat sign : TO LET
“Flat” is a word more commonly used in the British Isles than here. A flat is basically an apartment or condominium. The word “flat” is Scottish in origin, in which language it meant a “floor in a house”.

32. Taste : SAPOR
“Sapor” is another word for a flavor, a quality that can be tasted. “Sapor” is the Latin word for “taste, flavor”.

36. Liquor with the slogan “West of Expected” : SKYY VODKA
Skyy Vodka is produced in the US, although the operation is owned by the Campari Group headquartered in Italy. Skyy first hit the shelves in 1992 when it was created by an entrepreneur from San Francisco, California.

39. Something discounted at a deli? : TARE
“Tare” is the weight of a container that is deducted from the gross weight to determine the net weight, the weight of the container’s contents.

46. De Klerk succeeded him : BOTHA
P. W. Botha was prime minister of South Africa from 1978 to 1984, and the country’s first state president from 1984 to 1989. Botha was an advocate of the apartheid system, but was given credit for steps taken towards equality by the magnanimous Nelson Mandela.

F. W. de Klerk was the President of South Africa who led his National Party when the country ended apartheid, the policy of racial segregation. For his work in ending apartheid, De Klerk was awarded the Nobel Peace Prize in 1993 along with Nelson Mandela.

48. Rosetta Stone figure : GLYPH
A “glyph” is a writing element, perhaps an individual letter. The related term “pictograph” describes a graphic symbol that can be used as an element in writing.

Rosetta is a coastal city and port on the Mediterranean coast of Egypt. The Rosetta Stone is an Ancient Egyptian artifact of tremendous importance in deciphering Egyptian hieroglyphics. Carvings on the stone are actually three translations of the same passage of prose, one in Egyptian hieroglyphics, one in Egyptian Demotic language, and one in classical Greek. The stone was discovered by the French military during Napoleon’s 1798 campaign in Egypt. Before the French could get it back to France, the stone somehow ended up in enemy hands (the British), so it is now on display in the British Museum. Ownership of the stone is very much in dispute. The French want it, and understandably, the Egyptians would like it back.

56. “Vous,” informally : TOI
In French, the pronouns “toi” and “vous” both mean “you”, with the former being used with family and friends, and children. “Vous” is more formal, and also the plural form of “you”.