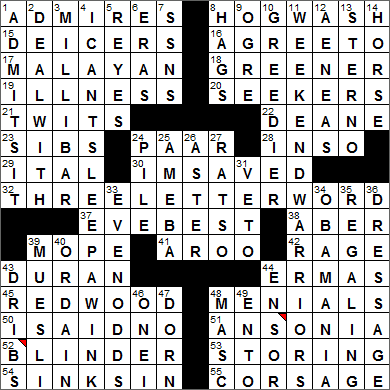 Today’s Wiki-est, Amazonian Googlies
Across
17. Like one of Brunei’s two main languages : MALAYAN
The official name of Brunei is the Nation of Brunei, the Abode of Peace. Brunei is situated in the island of Borneo, almost completely surrounded by Malaysia. Brunei’s government is dictated by the constitution adopted in 1959, and is ruled by a sultan with full executive authority. The main language spoken in the country is “Melayu Brunei” (Brunei Malay), with the official language being Malay. Apparently Malay and Brunei Malay are quite different from each other, with native speakers finding it difficult to understand each other.

21. Boobs : TWITS
“Twit” is a word not used very often here in America. It’s a slang term that was quite common in England where it was used for “someone foolish and idiotic”.

24. Onetime host of CBS’s “The Morning Show” : PAAR
Jack Paar was most famous as the host of “The Tonight Show”, from 1957 to 1962. When he died in 2004, “Time” magazine wrote that Paar was “the fellow who split talk show history into two eras: Before Paar and Below Paar”. Very complimentary …

29. Alternative to quotes: Abbr. : ITAL
Italic type leans to the right. The style is known as “italic” because the stylized calligraphic form of writing originated in Italy, probably in the Vatican.

30. Cry at a revival : I’M SAVED!
A “revival meeting” is a service in the Christian tradition that is held to provide inspiration to church members, or to gain converts.

“The King’s Speech” is a wonderful, wonderful 2010 film about King George VI and his efforts to overcome his speech impediment. Colin Firth, Geoffrey Rush and Helena Bonham Carter all do fabulous jobs playing the lead characters. It is an independent film, so was made with a relatively low budget of $15 million, but grossed almost $400 million at box offices worldwide. It is the most successful British independent film of all time.

38. But, in Bonn : ABER
After WWII, Bonn was chosen as the capital of West Germany, a choice promoted by Chancellor Konrad Adenauer who was from the area. After German reunification, the capital was moved to Berlin.

39. Be a Debbie Downer : MOPE
“Debbie Downer” is a slang phrase describing someone who knows how to bring down the mood. There was a character on “Saturday Night Live” who took the name Debbie Downer, played by comic actress Rachel Dratch.

43. Boxer who won 1980’s Brawl in Montreal : DURAN
Roberto Durán is a retired professional boxer from Panama. He earned the nickname “Manos de Piedra” (Hands of Stone) during his very successful career. Durán retired in 2001 after being involved in a car crash which required life-saving surgery.

44. Grammy-nominated Franklin and others : ERMAS
Erma Franklin was an R&B and gospel singer. She was the elder sister of Aretha Franklin. Erma toured with Aretha for a while, and even recorded backup vocals on her sister’s big hit “Respect”.

51. Historic residential hotel in Manhattan : ANSONIA
The Ansonia building in the Upper West Side of New York City was opened as a residential hotel in 1904, and in fact was the first air-conditioned hotel in the whole city. Former residents of the Ansonia include Babe Ruth, Arturo Toscanini, Igor Stravinsky and Enrico Caruso.

52. Part of a 14-Down’s harness : BLINDER
The piece of horse tack known as blinkers are also called blinders. Blinkers prevent a horse viewing what’s to the rear and to the side.

55. Spray on a dress : CORSAGE
“Corsage” is a word we imported from French in the late 15th century. Back then we used it to mean “the size of the body”. By the early 1800s a corsage was a bodice, or the body of a woman’s dress. At the beginning of the 20th century, the French term “bouquet de corsage” was being used for a “bouquet worn on the bodice”, and this has been shortened simply to “corsage”.

León is a province in the autonomous community of Castile and León in the northwest of Spain. The province’s capital is the city of León, which was founded as Roman military encampment around 29 BC.

12. Principal lieutenant of Hector in the “Iliad” : AENEAS
Aeneas was a Trojan who traveled to Italy and became the ancestor of all Romans. Aeneas’s story is told in Virgil’s epic poem “The Aeneid”.

13. Portable heater : STERNO
Sterno is a very useful product, a “jellied alcohol” that usually comes in a can. The can is opened and the contents burn very easily and persistently. The brand name “Sterno” comes from the original manufacturer, S. Sternau & Co. of Brooklyn, New York.

25. Formless life form : AMEBA
An ameba (or “amoeba” as we spell it back in Ireland) is a single-celled microorganism. The name comes from the Greek “amoibe”, meaning change. The name is quite apt, as the cell changes shape readily as the ameba moves, eats and reproduces.

26. Bloom in Robert Frost’s “A Late Walk” : ASTER
The wonderful poet Robert Frost was a native of San Francisco, but lived most of life in New England. He also spent a few years in England, just before WWI. Frost was well recognized for his work during his lifetime, and received four Pulitzer Prizes for Poetry.

When I go up through the mowing field,
The headless aftermath,
Smooth-laid like thatch with the heavy dew,
Half closes the garden path.

And when I come to the garden ground,
The whir of sober birds
Up from the tangle of withered weeds
Is sadder than any words

A tree beside the wall stands bare,
But a leaf that lingered brown,
Disturbed, I doubt not, by my thought,
Comes softly rattling down.

I end not far from my going forth
By picking the faded blue
Of the last remaining aster flower
To carry again to you.

27. Nickname in the Best Picture of 1969 : RATSO
Enrico Salvatore “Ratso” Rizzo is one of the characters in the groundbreaking 1969 movie “Midnight Cowboy”. Rizzo is a down-and-out con man, played by Dustin Hoffman.

31. Block from the White House : VETO
“Veto” comes directly from Latin and means “I forbid”. The word was used by tribunes of Ancient Rome to indicate that they opposed measures passed by the Senate.

34. Enthusiasm shown during a 2008 race : OBAMANIA
“Obamania” was a word coined for the enthusiasm expressed for then-presidential candidate Barack Obama in the 2008 election.

36. Olympic sport that includes passades and pirouettes : DRESSAGE
The equestrian sport of dressage involves demonstration of how well as horse responds to training. “Dressage” is a French word meaning “training”.

44. “Masks Confronting Death” painter, 1888 : ENSOR
James Ensor was a Belgian painter active in the first half of the twentieth century. Endor was noted for his influence on the expressionists and surrealists.