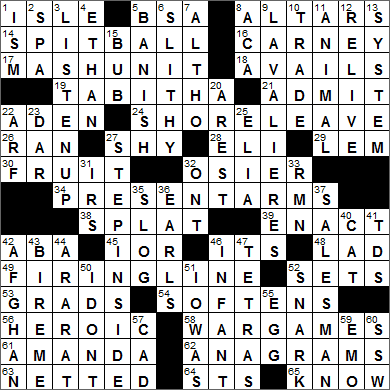 CROSSWORD SETTER: Michael S. Maurer
THEME: WarGames … today’s themed answers are all phrases associated with WAR, but are clued as though they have different meaning:

Today’s Wiki-est, Amazonian Googlies
Across
5. Eagles’ band?: Abbr. : BSA
The rank of Eagle Scout was introduced by the Boy Scouts of America (BSA) in 1911. A candidate for Eagle Scout must have first earned a minimum of 21 merit badges, and demonstrate leadership skills and embrace Scout Spirit. Prior to 1911, the highest rank attainable in the BSA was Wolf Scout.

14. Wet missile : SPITBALL
A spitball is a small lump of paper that has been chewed up and then used as a missile, say in a peashooter.

16. Jay ___, onetime Obama press secretary : CARNEY
Jay Carney served as the White House Press Secretary from 2011 to 2014, in the Obama administration. Carney also wrote and reported about the George W. Bush presidency, and indeed was on board Air Force One with President Bush on the day of the 9/11 attacks in 2001.

17. Potato? : MASH UNIT
The first Mobile Army Surgical Hospital (MASH) was deployed in August 1945. MASH units really came into the public consciousness after publication of the 1969 Richard Hooker novel “MASH”, which spawned the hit film and TV series that were both called “M*A*S*H”.

19. “Bewitched” spinoff : TABITHA
The sitcom “Tabitha” was a big flop, a spin-off of the very successful “Bewitched” series that had finished several years before “Tabitha” aired. The title role was played by Lisa Hartman, who continued with her acting career after “Tabitha” with some degree of success. Hartman is the wife of country music star Clint Black.

22. Major tanker port : ADEN
Aden is a seaport in Yemen, located on the Gulf of Aden by the eastern approach to the Red Sea. Aden has a long history of British rule, from 1838 until a very messy withdrawal in 1967. A native of Aden is known as an Adeni. Some believe that Cain and Abel are buried in the city.

27. Not quite enough : SHY
To be “shy” is to be short, lacking. The term originated as gambling slang, meaning to owe money to the pot.

28. Philanthropist Broad : ELI
Eli Broad made his fortune in real estate and was one of the founders of Kaufman and Broad, that we know these days as KB Homes. Broad’s net worth was recently reported at just over $5 billion.

29. Sci-fi author Stanislaw : LEM
Stanislaw Lem was a writer, mainly of science fiction, from Poland. Lem’s most famous work is the novel “Solaris”, which has been adapted into a film three times.

30. Most of the symbols on a traditional slot machine : FRUIT
Slot machines earned the nickname “one-armed bandits” simply because they had “one arm”, the handle pulled to operate the machine, and they robbed you of all your money!

32. Willow shoot : OSIER
Most willows (trees and shrubs of the genus Salix) are called just that, willows. Some of the broad-leaved shrub varieties are called sallow, and the narrow-leaved shrubs are called osier. The variety known as osier is commonly used in basketry, as osier twigs are very flexible.

42. Org. originating the three-point shot : ABA
The three-point field goal was adopted first by the American Basketball League (ABA), in 1961. It was instituted by the NBA in the 1979-80 season.

“FHM” is a men’s magazine published in the UK and was originally titled “For Him Magazine”, which was abbreviated to “FHM” in 1994.

56. Like Superman and Spider-Man : HEROIC
Superman’s comic book creators gave their title character’s alter-ego the name “Clark Kent” by melding the names of Clark Gable and Kent Taylor, two leading men of the cinema at the time Superman was created. However, they modeled Clark’s character more on the silent film actor Harold Lloyd.

Spider-Man was a creation of Stan Lee, along with Steve Ditko, and first appeared in comics in 1962. Spider-Man was a somewhat groundbreaking character in that his alterego was a teenage high school student, marking the first time that a young person featured front and center as the superhero.

58. 1983 sci-fi drama … or a possible title for this puzzle : WARGAMES
“WarGames” is a really fun 1983 movie starring Matthew Broderick and Ally Sheedy. I just found out that there is a sequel that was released in 2008 called “WarGames: The Dead Code”. I just put it on my Christmas list …

61. Actress Bynes of “She’s the Man” : AMANDA
Amanda Bynes is an actress that made it big as a teenager on TV shows like “All That” and “The Amanda Show”. She then moved on to playing teen roles on the big screen, particularly in “She’s the Man” and “Hairspray”.

6. Like the toves in “Jabberwocky” : SLITHY
Here are the first two verses of “Jabberwocky” by Lewis Carroll, probably the one poem that we all just loved learning to recite at school:

8. Signature Obama health measure, for short : ACA
The correct name for what has been dubbed “Obamacare” is the “Patient Protection and Affordable Care Act”.

13. What an anarchist rails against, with “the” : SYSTEM
By definition, an anarchist is someone who feels that government is oppressive and should be gotten rid of.

15. Pal : BUB
“Bub” is American slang, a term used to address males, and is possibly a variation of bud.

25. Director Kazan : ELIA
Elia Kazan won Oscars for best director in 1948 for “Gentleman’s Agreement” and in 1955 for “On The Waterfront”. In 1999 Kazan was given an Academy Lifetime Achievement Award. He also directed “East of Eden”, which introduced James Dean to movie audiences, and “Splendor in the Grass” that included Warren Beatty in his debut role.

31. Code letters? : IRS
The Internal Revenue Service (IRS) was set up during the Civil War to raise money to cover war expenses. Prior to the introduction of income tax in 1862, the government was funded by levies on trade and property.

33. Watergate initials : RMN
President Richard Milhous Nixon (RMN) used “Milhous” in his name in honor of his mother Hannah Milhous. Richard was born in a house in Yorba Linda, California. You can visit that house today as it is on the grounds of the Richard Nixon Presidential Library. It’s a really interesting way to spend a few hours if you ever get to Yorba Linda …

36. Doo-wop group with the 1963 hit “Remember Then,” with “the” : EARLS
The Earls were a doo-wop group from the Bronx, New York that formed in 1961. The big hit for the Earls was their 1962 single “Remember Then”. The group is still performing, so keep an eye out for them in your neighborhood.

The Minnesota Vikings joined the NFL as an expansion team in 1960. Founded in Minnesota, the team’s name reflects the location’s reputation a center of Scandinavian American culture.

42. Warm blanket : AFGHAN
An afghan is a blanket or a wrap that is knitted or crocheted from very colorful yarns.

43. Old galley : BIREME
Triremes were galleys used in the Mediterranean by a number of cultures, including the Ancient Greeks and Romans. The trireme was so called because there were three rows of oars on each side of the vessel. The term “trireme” comes from the Latin “tres remi” meaning “three-oar”. There was also a less ambitious version of the trireme that had only two banks of oars, and that was known as a bireme.

44. Biblical debarkation point : ARARAT
Mount Ararat is in Turkey. Ararat is a snow-capped dormant volcano with two peaks. The higher of the two, Greater Ararat, is the tallest peak in the country. Ararat takes its name from a legendary Armenian hero called Ara the Beautiful (or Ara the Handsome). According to the Book of Genesis, Noah’s ark landed on Mount Ararat as the Great Flood subsided.

47. Aquarium fish : TETRAS
The neon tetra is a freshwater fish, native to parts of South America. The tetra is a very popular aquarium fish and millions are imported into the US every year. Almost all of the imported tetras are farm-raised in Asia and very few come from their native continent.

52. Snide comments : SNARK
“Snark” is a term that was coined by Lewis Carroll in his fabulous 1876 nonsense poem “The Hunting of the Snark”. Somehow, the term “snarky” came to mean “irritable, short-tempered” in the early 1900s, and from there “snark” became “sarcastic rhetoric” at the beginning of the 21st century.

55. Humpty Dumpty, e.g. : EGG
Humpty Dumpty is a character in a nursery rhyme, actually an egg although that isn’t specifically called out in the original rhyme: