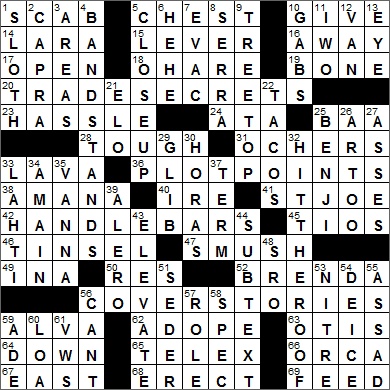 CROSSWORD SETTER: Adam G. Perl
THEME: Double Meanings … each of today’s themed answers is a common phrase, actually a noun in two parts. But, each answer is clued as if the phrase is a verb followed by a noun:

20A. What gossip columnists do? TRADE SECRETS
36A. What mathematicians do? PLOT POINTS
42A. What bouncers do? HANDLE BARS
56A. What literary critics do? COVER STORIES

Today’s Wiki-est, Amazonian Googlies
Across
5. Place to put a stethoscope CHEST
The word “stethoscope” comes from the Greek word for “chest examination”. The stethoscope was invented back in 1816 in France by René Laennec, although back then it looked just like an ear trumpet, a wooden tube with flared ends.

18. Midwest air hub O’HARE
O’Hare International is the fourth busiest airport in the world. The original airport was constructed on the site between 1942 and 1943, and was used by the Douglas Aircraft Company for the manufacture of planes during WWII. Before the factory and airport were built, there was a community in the area called Orchard Place, so the airport was called Orchard Place Airport/Douglas Field. This name is the derivation of the airport’s current location identifier: ORD (OR-chard D-ouglas). Orchard Place Airport was renamed to O’Hare International in 1949 in honor of Lieutenant Commander Butch O’Hare who grew up in Chicago. O’Hare was the US Navy’s first flying ace and a Medal of Honor recipient in WWII. As an aside, Butch O’Hare’s father Edward was a lawyer friend of Al Capone who eventually worked undercover for the IRS and helped get the famous gangster convicted on tax evasion. Some years later, Edward was shot to death while driving his car.

31. Earth tones OCHERS
Ochre is often spelled “ocher” in the US (it’s “ochre” where I come from). Ocher is a light, yellowy-brown color, although variations of the pigment are possible such as red ocher and purple ocher.

38. Big name in appliances AMANA
The Amana Corporation takes its name from the location of its original headquarters, in Middle Amana, Iowa.

41. Missouri city, familiarly ST JOE
The city of Saint Joseph in Missouri was the westernmost point in the US that was accessible by rail after the Civil War. As such, it was a final stopping-off point as people headed out to the Wild West. The city takes its name from its founder, fur trader Joseph Robidoux. Robidoux apparently like things named after himself and his family, as eight of the main streets downtown were named after his children, and another was named for his second wife!

46. Strands in December? TINSEL
The custom of decorating trees at Christmas seems to have originated in Renaissance Germany. Those first trees were placed in guildhalls and were decorated with sweets and candy for the apprentices and children. After the Protestant Reformation, the Christmas tree became an alternative in Protestant homes for the Roman Catholic Christmas cribs. The Christmas tree tradition was imported into Britain by the royal family because of its German heritage. That tradition spread from Britain into North America.

52. Starr of old comics BRENDA
“Brenda Starr” is a comic strip created by Dale Messick. The strip is somewhat unique in the world of syndicated comics in that it was created by a woman, and has been drawn by women ever since Messick retired in 1980. The storyline features Brenda Starr who lives through exciting and exotic adventures and romances.

59. Thomas ___ Edison ALVA
Thomas Edison was a very successful inventor. He held over a thousand US patents in his name. Included in the list of Edison’s inventions is the phonograph, the movie camera and the long-lasting light bulb. He passed away in 1931. There is a test tube at the Henry Ford Museum that supposedly holds Edison’s last breath. Ford convinced Thomas’s son Charles to seal up a tube of air in the room just after the inventor died, as a memento.

63. Soul singer Redding OTIS
Otis Redding is often referred to as the “King of Soul”, and what a voice he had. Like so many of the greats in the world of popular music it seems, Redding was killed in a plane crash, in 1967 when he was just 26 years old. Just three days earlier he had recorded what was to be his biggest hit, “(Sittin’ On) The Dock of the Bay”.

64. With 67-Across, coastal Maine DOWN
(67A. See 64-Across EAST)
The coast of Maine is often referred to as “Down East” by the people of New England.

65. Bygone communication TELEX
Telex grew out of the world of the telegraph. What Telex brought to telegraphy was the ability to route messages. Instead of having to talk to an operator to route a particular message to the intended party, the user of a telex could route the message directly to another telex machine by way of a rotary dial, very similar to that on a telephone.

66. SeaWorld attraction ORCA
The taxonomic name for the killer whale is Orcinus orca. The use of the name “orca”, rather than “killer whale”, is becoming more and more common. The Latin word “Orcinus” means “belonging to Orcus”, with Orcus being the name for the Kingdom of the Dead.

SeaWorld was started in San Diego in 1964. The original plan was build an underwater restaurant with a marine life show. Eventually the founders dropped the idea of the eating establishment and just went with a theme park. SeaWorld has been mired in controversy since the 2013 release of the documentary “Blackfish”, which tells of the involvement of a particular killer whale in the death of two SeaWorld employees and one SeaWorld visitor.

69. Twitter ___ (news source) FEED
A publisher can use a Twitterfeed to feed content (such as these blog posts) to Twitter users. I suppose I should look into that …

Down
1. It’s a sin SLOTH
“Sloth”, meaning “indolence, sluggishness”, comes from the Middle English word “slowe”, the same root for our contemporary word “slow”. The animal, the sloth, is named for its slow-moving behavior.

2. Frank who directed “It Happened One Night” CAPRA
I can’t tell you how many of Frank Capra’s movies are on my list of all-time favorites. He directed such classics as “It Happened One Night”, “Mr. Deeds Goes to Town”, “Lost Horizon”, “Mr. Smith Goes to Washington”, “Meet John Doe”, “Arsenic and Old Lace” and the holiday favorite “It’s a Wonderful Life”. Capra was the first person to win three directorial Oscars: for “It Happened One Night”, “Mr. Deeds Goes to Town” and “You Can’t Take It With You”. Capra also did his bit during WWII, enlisting just a few days after Pearl Harbor was attacked. Given his great talent, and the fact that he enlisted at the relatively advanced age of 44, the US Army put him to work directing 11 documentary war films in the “Why We Fight” series, for which he was awarded the Distinguished Service Medal.

8. Missionary Junípero ___ SERRA
Junípero Serra was a Spanish missionary, a founder of several missions out here in California. Among those associated with Serra is the Mission in Carmel, where Serra’s remains are buried, and Mission San Juan Capistrano, the chapel of which is believed to be the oldest standing building in the state.

9. “Rock-a-bye, baby” location TREETOP
“Rock-a-Bye Baby” is a lullaby, the history of which is much debated. Some say it originated in England, and others claim that it was the first poem that was written on American soil.

11. ___ Jima IWO
Iwo Jima is a volcanic island located south of Tokyo that today is uninhabited. The name is Japanese for “Sulfur Island”, referring to the sulfur mining on which Iwo Jima’s economy once depended. There were about a thousand Japanese civilians living on the island prior to WWII. In 1944, there was a massive influx of Japanese military personnel in anticipation of the inevitable US invasion. As the Japanese military moved in, the civilians were forced out and no one has lived there since.

25. Cinema canine BENJI
Benji is the main character in a series of “Benji” movies made starting from 1974. Benji is a mixed-breed dog.

30. Dances around a lifted chair, maybe HORAS
The hora (also “horah”) is a circle dance that originated in the Balkans. The hora was brought to Israel by Romanian settlers, and is often performed to traditional Israeli folk songs. The dance is a regular sight at Jewish weddings and at bar and bat mitzvahs. At such events, it is common for the honorees to be raised on chairs during the dance.

33. Christine of “Chicago Hope” LAHTI
Christine Lahti is an actress probably best known for playing Dr. Kate Austen on the TV medical drama “Chicago Hope”. If you read “The Huffington Post” you might run across her as well, as Lahti is a contributing blogger.

34. How the Titanic was going before it struck an iceberg AMAIN
“Amain” is an old term meaning “at great speed” or “of great strength”.

35. Woman who has a way with words? VANNA
Vanna White is the lady who turns the letters on the “Wheel of Fortune” game show. White is big into knitting and crochet, and has her own line of yarns called “Vanna’s Choice”.

37. Semester, e.g. TERM
“Semester” is a German word from the Latin “semestris”, an adjective meaning “of six months”. We use the term in a system that divides an academic year into two roughly equal parts. A trimester system has three parts, and a quarter system has four.

51. Meal that often includes matzo ball soup SEDER
The Passover Seder is a ritual feast that marks the beginning of the Jewish Passover holiday, celebrating the liberation of the Israelites from slavery in Egypt. One of the traditions at the meal is that the youngest child at the table asks “The Four Questions”, all relating to why this night is different from all other nights in the year:

53. Saltpetre NITRE
The chemical name for saltpeter (also called “niter”) is potassium nitrate. The exact origin of the name “saltpeter” isn’t clear, but it may have come from the Latin “sal petrae” meaning “stone salt”. The main use for potassium nitrate is as a fertilizer, a source of potassium and nitrogen. As it is a powerful oxidizing agent, it is also used in amateur rocket propellants. Anyone who has ignited one of those “engines” would have noticed the lilac-colored flame, indicating the presence of potassium.

55. Syrian strongman ASSAD
Dr. Bashar al-Assad is the current President of the Syrian Arab Republic and the son of the former President Hafez al-Assad whom he replaced in 2001. President Assad is a medical doctor, speaks fluent English and conversational French. Assad was studying ophthalmology in London when he met his wife, who is an Englishwoman.

61. Golfs, e.g., informally VWS
The Volkswagen Rabbit is a small, front-wheel drive car that is sold as the Volkswagen Golf outside of North America.