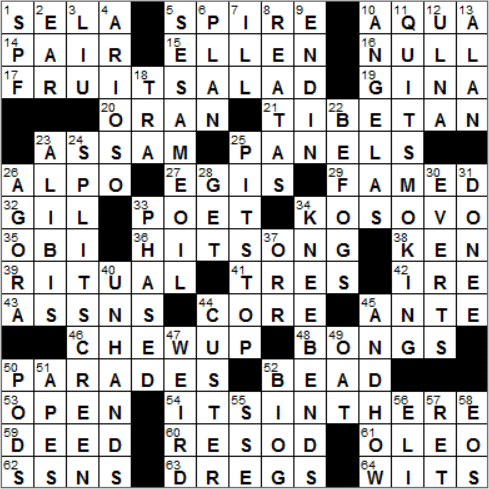 54A. Longtime Prego slogan … with a hint to the answers to the five starred clues IT’S IN THERE

Today’s Wiki-est, Amazonian Googlies
Across
1. Actress Ward SELA
The actress Sela Ward turns up in crosswords a lot. Ward played Teddy Reed in the TV show “Sisters” in the nineties, and was in “Once and Again” from 1999-2002. I don’t know either show, but I do know Ward from the medical drama “House” in which she played the hospital’s lawyer and Greg House’s ex-partner. That was a fun role, I thought. More recently Ward played a lead role on “CSI: NY” and was a very welcome and much-needed addition to the cast …

15. Barkin of “The Big Easy” ELLEN
Ellen Barkin is an actress from the Bronx in New York City. I mostly know Barkin from her roles in the 1989 movie “Sea of Love” and 2007’s “Ocean’s Thirteen”.

“The Big Easy” is a 1987 crime film set in New Orleans that stars Dennis Quaid and Ellen Barkin. The original screenplay was set in Chicago, and so the anticipated title for the movie was “Windy City”.

19. Actress Lollobrigida GINA
Gina Lollobrigida is an Italian actress, and also a photojournalist and sculptor. After her career in movies started to slow down in the seventies, she turned to photojournalism. She has photographed many of the greats, including Paul Newman, Salvador Dali, Audrey Hepburn and even the German national soccer team. In fact, she was also able to arrange an exclusive interview with Fidel Castro, much to the chagrin of the world’s professional journalists.

20. Port of Algeria ORAN
Oran lies on the Algerian coast, and is famous for being the port where the French Navy was largely destroyed by the British during WWII in order to avoid the French vessels falling into the hands of Nazi Germany after France surrendered. This decisive and unexpected unilateral action by the British sent a very strong message around the world that Britain was willing to fight alone against the axis powers if necessary.

21. Like one side of Mount Everest TIBETAN
Mount Everest was first summited in 1953 by New Zealander Edmund Hillary and Nepali sherpa Tenzing Norgay. Hillary and Norgay were part of an expedition from which two pairs of climbers were selected to make a summit attempt. The first pair were Tom Bourdillon and Charles Evans, and they came within 330 feet of their goal but had to turn back. The expedition sent up the second pair two days later, and history was made on 29 May 1953.

23. State that borders Bangladesh ASSAM
Assam is a state in the very northeast of India, just south of the Himalayas. Assam is noted for its tea as well as its silk.

26. Brand in a bowl ALPO
Alpo is a brand of dog food first produced by Allen Products in 1936, with “Alpo” being an abbreviation for “Allen Products”. Lorne Greene used to push Alpo in television spots, as did Ed McMahon and Garfield the Cat, would you believe?

27. Sponsorship: Var. EGIS
Someone is said to be under the aegis (also “egis”) of someone else (for example) if that other person provides protection, or perhaps sponsorship. The word “aegis” comes from the Greek word for a goat (“aigis”), the idea being that the goatskin shield or breastplate worn by Zeus or Athena, gave some measure of protection.

32. Baseball great Hodges GIL
Gil Hodges was a professional baseball player and manager. Perhaps Hodges’ most celebrated achievement was managing the New York Mets team (the “Miracle Mets”) that won the 1969 World Series. Hodges died from a heart attack just a few years later in 1972, when he was only 48 years old.

34. Its capital is Pristina KOSOVO
The country name “Kosovo” is an adjectival form of the Serbian word “kos” meaning “blackbird”. The name commemorates the “field of the blackbirds” the site of a 1389 battle between Serbia and the Ottoman Empire. The dispute over Kosovo technically dates back to the implosion of Yugoslavia in the 1990s. The capital of Kosovo is Pristina.

35. Geisha’s sash OBI
The sash worn as part of traditional Japanese dress is known as an obi. The obi can be tied in what is called a butterfly knot (chocho musubi) or perhaps in a drum knot (taiko musubi).

38. He’s a real doll KEN
Barbie’s male counterpart doll is Ken, and Ken’s family name is Carson. Barbie’s full name is Barbie Millicent Roberts. When Ken was introduced in 1959, it was as Barbie’s boyfriend. In 2004 it was announced that Ken and Barbie were splitting up, and needed to spend quality time apart. Soon after the split, Barbie “met” Blaine, a boogie boarder from Australia.

39. Holy Communion, e.g. RITUAL
The Communion rite is the part of the Mass in the Roman Catholic tradition. The rite involves distribution of the Communion bread (the host, a wafer) to the faithful.

41. Very, in Vichy TRES
Vichy is a spa town in the center of France. The people from Vichy are known as Vichyssois. After Paris, was occupied by the Germans in WWII, Vichy was chosen as the seat of government for what was called the French State. The Vichy government had theoretical authority even in occupied France, and is remembered for its collaboration with the German authorities. Vichy was chosen as the new seat of government because of its relative proximity to Paris, and simply because the town had the largest hotel room capacity in the “free zone” of the country.

48. Stoners’ purchases BONGS
A “bong” is a smaller and more portable version of a “hookah”, with both being filtration devices for smoking especially tobacco and cannabis. The term “bong” comes from the Thai word “baung” that is used for a wooden pope cut from bamboo.

54. Longtime Prego slogan … with a hint to the answers to the five starred clues IT’S IN THERE
The Prego brand of pasta sauce is owned by the Campbell Soup Company. It is actually based on the family recipe of one of the company’s chefs. “Prego” literally means “I pray” in Italian, but it translates in English best as “you’re welcome” when it is used after a “thank you” (“grazie”, in Italian).

61. Yellow sub? OLEO
Emperor Louis Napoleon III of France announced a competition to develop a substitute for butter, a substitute that would be more accessible to the lower classes and more practical for the armed forces. In 1869, a French chemist called Hippolyte Mege-Mouries came up with something that he called oleomargarine, which was eventually manufactured under the trade name “margarine”. The name “oleomargarine” also gives us our generic term “oleo”.

63. Bottom of the barrel DREGS
The dregs in wine, the sediment that settles during fermentation (and sometimes in the bottle), is also called “lees”.

Down
1. Tanning lotion letters SPF
In theory, the sun protection factor (SPF) is a calibrated measure of the effectiveness of a sunscreen in protecting the skin from harmful UV rays. The idea is that if you wear a lotion with say SPF 20, then it takes 20 times as much UV radiation to cause the skin to burn than it would take without protection. I say just stay out of the sun …

3. Actress Lucy LIU
Lucy Liu is an actress from Queens, New York. Liu’s big break came when she was chosen to play the Ling Woo character in “Ally McBeal”. I liked her in the 2000 film “Charlie’s Angels” but as I am no fan of Quentin Tarantino, I did not enjoy the movie “Kill Bill”. I am having fun watching one of Liu’s more recent projects, in which she plays one of the two leads in the TV crime drama “Elementary”.

4. Bach composition ARIOSO
An arioso (plural “ariosi”) is a solo vocal piece in a classical work such as an opera or an oratorio. An arioso’s structure lies somewhere between that of a full-blown aria and speech-like recitative.

7. Feeling fluish, say ILL
Influenza (flu) is an ailment that is caused by a virus. The virus is readily inactivated by the use of soap, so washing hands and surfaces is especially helpful in containing flu outbreaks.

8. Rodeo ropes REATAS
“Reata” is the Spanish word for “lasso”. We tend to use the spelling “riata” in English, but sometimes can use the original Spanish word.

10. Frank McCourt’s “___ Ashes” ANGELA’S
“Angela’s Ashes” is a Pulitzer-winning memoir by Frank McCourt. It tells of McCourt’s upbringing in an impoverished family in Limerick in the west of Ireland.

13. Ex-Fed head Greenspan ALAN
Alan Greenspan served as the Chairman of the Federal Reserve from 1987 to 2006, the longest anyone has held that post. He was appointed by President Reagan for a four-year term, and was reappointed by subsequent presidents until Greenspan retired. Outside of the world of economics, Greenspan is married to NBC journalist Andrea Mitchell, and back in the seventies he even dated Barbara Walters.

23. Excuses, excuses ALIBIS
“Alibi” is the Latin word for “elsewhere” as in, “I claim that I was ‘elsewhere’ when the crime was committed … I have an ‘alibi'”.

25. *Time to retire? PIT STOP
A racing car might get “retired” (get new tires) during a pit stop.

26. Ancient market AGORA
In early Greece the “agora” was a place of assembly. Often the assemblies held there were quite formal, perhaps for the reading of a proclamation. Later in Greek history, things became less formal as the agora evolved into a market place. Our contemporary word “agoraphobia” comes from these agorae, in the sense that an agoraphobe has a fear of open spaces, a fear of “public meeting places”.

37. Canadian-born hockey great ORR
Bobby Orr is regarded as one of the greatest hockey players of all time. By the time he retired in 1978 he had undergone over a dozen knee surgeries. At 31 years of age, he concluded that he just couldn’t skate anymore. Reportedly, he was even having trouble walking …

44. Big name at Little Bighorn CUSTER
The Battle of Little Bighorn was a famous engagement between the Lakota, Northern Cheyenne and Arapaho Native American peoples against the 7th Cavalry Regiment of the US Army led by General George Custer. Custer was soundly defeated and he and all of his men were killed in the engagement. I had the privilege of visiting the battle site a few years ago, and it was a very memorable experience.

50. Acacia features PODS
Acacia is a genus of tree and shrub, also known as thorntree, whistling thorn and wattle. The acacia is the primary food source for the giraffe in the wild, with the animal eating the leaves high in the tree, leaves that are inaccessible by competing species.

56. Yalie ELI
Eli is the nickname for a graduate of Yale University, a term used in honor of the Yale benefactor Elihu Yale.

57. Part of AARP: Abbr. RET
AARP is now the official name for the interest group that used to be called the American Association of Retired Persons. The name change reflects the current focus of the group on all Americans aged 50 or over, as opposed to just people who have retired.

58. Canon camera EOS
I’ve been using Canon EOS cameras for decades now, and have nothing but good things to say about the cameras and the lenses. The EOS name stands for Electro-Optical System, and was chosen because it evokes the name of Eos, the Titan goddess of dawn from Greek mythology.