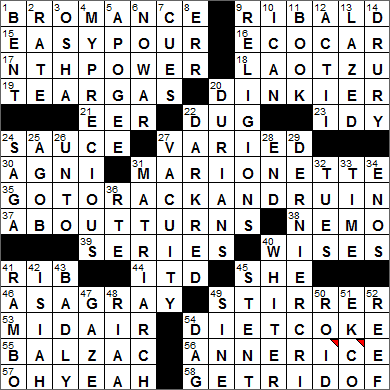 Today’s Wiki-est, Amazonian Googlies
Across
1. Two-man band? BROMANCE
A “bromance” is the name given these days to a close relationship between two straight males.

18. “Anticipate the difficult by managing the easy” philosopher LAO-TZU
Lao Tse (also Lao-Tzu) was a central figure in the development of the religion/philosophy of Taoism.

21. Sonnet extender? -EER
A sonnet is a short poem with varying rhyming schemes but always with 14 lines. The sonnet form has been around at least since the 13th century. The Shakespearean sonnet is composed of three quatrains (4 lines) and a final couplet (2 lines).

27. Partner of many VARIED
Many and varied …

31. One being strung along? MARIONETTE
A marionette is a type of puppet, one that is controlled from above by a series of strings or wires. The term “marionette” is French for “little, little Mary” and is probably a reference to one of the first such puppets, which depicted the Virgin Mary.

35. Decline dramatically GO TO RACK AND RUIN
The phrase “rack and ruin”, meaning “complete destruction”, is a derivative of “wreck and ruin”.

38. Title subject of a search in a 2003 film NEMO
“Finding Nemo” is a 2003 animated blockbuster from Pixar. The film was the winner of the Oscar that year for Best Animated Feature. Believe it or not, “Finding Nemo” is the best-selling DVD of all time and, until 2010’s “Toy Story 3”, it was the highest-grossing, G-rated movie at the box office.

39. “Twilight,” e.g. SERIES
The reference, is to the “Twilight” series of books by Stephenie Meyer. “The Twilight Saga” is a series of films based on the books. I don’t do vampires …

45. Storm designation SHE
Hurricanes are given names primarily to help the public keep track dangerous systems. The names are decided ahead of the hurricane season, with the first system given a name beginning with A, the second, B etc. The names are alternated between male and female names throughout the season. Also, if the first storm of the season is male, then the following year a female name is chosen. For hurricanes in the North Atlantic, names are assigned for every letter, except Q, U, X, Y and Z.

54. Mixer for losers? DIET COKE
Diet Coke is a sugar-free version of Coca Cola that was introduced back in 1982. If you drink Diet Coke around the world, you’ll receive a slightly different drink depending on where you are. Various artificial sweeteners are banned as health risks in various countries, so Coke varies its formulation to comply with local laws.

Down
3. Org. that, when spelled backward, is an old-timey exclamation OSHA
The Occupational Safety and Health Administration (OSHA) was created in 1970 during the Nixon administration. OSHA regulates workplaces in the private sector and regulates just one government agency, namely the US Postal Service.

4. What Gollum calls the Ring in “The Lord of the Rings” MY PRECIOUS
The words “Bless us and splash us, my precioussss!” are spoken by Gollum, in J. R. R. Tolkien’s fantasy novel “The Hobbit”. Gollum is a Hobbit with a split personality, which he developed under the influence of “the Ring”.

5. Nadir’s opposite APOGEE
I’m not sure that this answer is strictly correct …

11. Musical component BOOK
A libretto can be the book that contains the text of a dramatic musical work, with the text also being called a libretto.

12. Last part of “Waiting for Godot” ACT II
An Irishman I may be, but I have sat through so many Samuel Beckett plays (the Irish dramatist) and I have yet to come away feeling satisfied that I spent my time well. Of course I am in the minority, as Beckett’s play “Waiting for Godot” was once voted the most significant English language play of the 20th century. Maybe I will try again one day …

The Theatre Royal, Drury Lane in London, is actually the oldest theater in the city. The building itself has been replaced three times in its long history dating back to 1663 (1663! Can you imagine?). Today, the theater is owned by the great composer, Andrew Lloyd Webber, and he makes sure that it is used to stage musical theater. If you are heading over to London anytime soon, you can see the current production of “Charlie and the Chocolate Factory!”.

20. Southeast Asian fruits with large, thick spines DURIANS
Durian is a very popular fruit in southeast Asia, despite the fact that it has a very strong odor. Some say that smell is similar to rotten onions or raw sewage. In fact, the durian is forbidden in some hotels and public transportation systems.

22. Burgundy or claret DARK RED
Burgundy and claret are both dark red colors, with the names deriving from the red wines.

24. “Twilight,” e.g. SAGA
I don’t do vampires. The reference, is to a character in “The Twilight” series of books by Stephenie Meyer. “The Twilight Saga” is a series of films based on the books.

25. Oodles A GOB
“Gobs” is an informal term meaning “a large amount”.

It’s thought that the term “oodles”, meaning “a lot”, comes from “the whole kit and caboodle”.

How adequate unto itself
Its properties shall be
Itself unto itself and none
Shall make discovery.

Adventure most unto itself
The soul condemned to be —
Attended by a single Hound
Its own identity.

29. Newest fashion DERNIER CRI
The French phrase “dernier cri” translates literally as “the latest cry or scream”, but is used to denote the latest fashion.

32. It’s named for a Scand. god of battle TUES
The name “Tuesday” comes from an Old English word that translates as “Tiw’s Day”. In turn, “Tiw” was the Old English name for the Norse god “Týr”. Týr was the Norse god of single combat, victory and heroic glory.

34. Nonhuman Earth orbiter of 1961 ENOS
Enos was a chimpanzee who was launched into Earth orbit in 1961 by NASA on a Mercury Atlas 4 rocket. Enos’s flight was a rehearsal for the first orbital flight made by an American, astronaut John Glenn. Enos returned from his mission safely, but died the following year from dysentery.

41. Fanatically militant sort RAMBO
A “rambo” is very violent and militant person. The term is relatively recent one, coming from the character John Rambo played by Sylvester Stallone in the “Rambo” series of movies. The first Rambo film made was “First Blood” in 1982. The film in turn is based on the 1972 novel of the same name by David Morrell.

“Veep” is a political satire sitcom on HBO that is a remake of the British show “The Thick of It”. “Veep” is set in the office of a fictional Vice President of the United States played by Julia Louis-Dreyfus.

45. Widening agent in medicine STENT
In the world of medicine and surgery, a stent is an artificial tube inserted inside a vessel in the body, say an artery, so that it reduces the effects of a local restriction in the body’s conduit.

48. Gold-certifying grp. RIAA
The Recording Industry of America (RIAA) represents music distributors. It is the RIAA that certifies records that have gone gold and platinum i.e. reached fixed sales thresholds. It’s also the RIAA that goes after individuals who share music illegally online.

50. ___ rage (result of juicing) ROID
Steroids are found commonly in nature, with familiar examples being cholesterol and testosterone. The controversial class of drugs called anabolic steroids (known informally as “roids” or simply “steroids”) are artificially produced chemicals designed to mimic the effect of the male sex hormone, testosterone. They are termed “anabolic” as they build up cellular tissue (particularly muscle) in a process called anabolism. Taking anabolic steroids can be termed “juicing”, and the aggressive behavior that can be a side-effect is known as “roid rage”.

51. Sister brand of CorningWare EKCO
The EKCO name dates back to 1888 when Edward Katzinger founded his company in Chicago, to make baking pans. The acronym EKCO stands for “Edward Katzinger Co”.

54. The U.N.’s ___ Hammarskjöld DAG
Dag Hammarskjold was the second secretary-general of the United Nations, right up until his death in a plane crash in Rhodesia in 1961. The crash was considered suspicious at the time as the bodyguards were found to have bullet wounds when they died, but this was put down to bullets exploding in the fire after the crash.