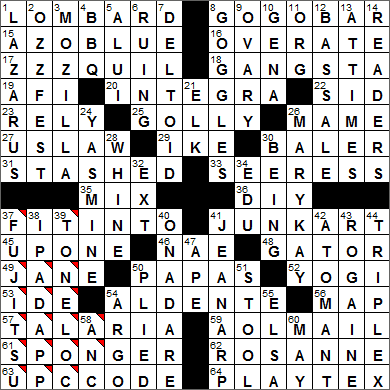 CROSSWORD SETTER: David Steinberg
THEME: None
BILL BUTLER’S COMPLETION TIME: Did not finish!
ANSWERS I MISSED: Too many in the bottom-left …

Today’s Wiki-est, Amazonian Googlies
Across
1. ___ Street, London’s onetime equivalent to New York’s Wall Street : LOMBARD
Lombard Street in London has been associated with the banking and insurance industries since medieval times, and is sometimes compared with New York City’s Wall Street. The street was developed on land granted in the late 13th century to goldsmiths from Lombardy in Italy, hence the name.

8. Lurid nightspot : GOGO BAR
Go-go dancing started in the early sixties. Apparently, the first go-go dancers were women at the Peppermint Lounge in New York City who would spontaneously jump up onto tables and dance the twist. It wasn’t long before clubs everywhere started hiring women to dance on tables for the entertainment of their patrons. Out in Los Angeles, the “Whisky a Go Go” club on Sunset Strip added a twist (pun intended!), as they had their dancers perform in cages suspended from the ceiling, creating the profession of “cage dancing”. The name “go-go” actually comes from two expressions. The expression in English “go-go-go” describes someone who is high energy, and the expression in French “a gogo” describes something in abundance.

15. Synthetic purplish colorant : AZO BLUE
Azo compounds have very vivid colors and so are used to make dyes, especially dyes with the colors red, orange and yellow. The term “azo” comes from the French word “azote” meaning “nitrogen”. French chemist Lavoisier coined the term “azote” from the Greek word “azotos” meaning “lifeless”. He used this name as in pure nitrogen/azote animals die and flames are snuffed out (due to a lack of oxygen).

17. Vicks product : ZZZQUIL
ZzzQuil, Benadryl, Unisom and Sominex are all brand names for the antihistamine diphenhydramine, which also has sedative properties.

18. Rap type : GANGSTA
Gangsta rap is a type of hip hop music with lyrics that reflect the violent lifestyle experienced by some inner-city youth.

19. Assn. with a “100 Years … 100 Movies” list : AFI
The American Film Institute (AFI) was founded in 1967 by the National Endowment for the Arts (NEA). One of the AFI’s more visible programs is the “100 Year Series”, including lists of Best Movies in several categories and a list of the Best Movie Quotes in 100 years of movie-making.

20. Bygone Acura : INTEGRA
Acura is a division of the Honda Motor Company, their luxury brand. As an aside, Infiniti is the equivalent luxury brand for the Nissan Motor Company, and Lexus is the more luxurious version of Toyota’s models.

22. Non-Roman Caesar : SID
Sid Caesar achieved fame in the fifties on TV’s “Your Show of Shows”. To be honest, I know Sid Caesar mainly from the fun film version of the musical “Grease”, in which he played Coach Calhoun.

26. Musical title character who “made us feel alive again” : MAME
The musical “Mame” opened on Broadway in 1966, with Angela Lansbury in the title role. The musical is based on the 1955 novel “Auntie Mame” written by Patrick Dennis.

29. “___ in ’56” (old campaign button) : IKE
“I Like Ike” was a political slogan that originated with the grassroots movement to get Dwight D. Eisenhower to run for president in the 1952 presidential election. The slogan was modified in the president’s reelection campaign four years later to “Ike in ‘56”.

35. Gorp, e.g. : MIX
“Gorp” is the name sometimes used for trail mix, particularly by hikers. It’s not really known for sure how this name came about, but some say it stands for “good old raisins and peanuts” or perhaps “gobs of raw protein”.

48. Tim Tebow, in college football : GATOR
Tim Tebow is a former quarterback who played mainly for the Denver Broncos and New York Jets. Tebow’s relatively short professional career followed a very successful college career during which he became the first sophomore to win the Heisman Trophy.

54. Trattoria specification : AL DENTE
The Italian expression “al dente” literally means “to the tooth” or “to the bite” and is used to describe not only pasta, but also vegetables that are cooked so that they are tender yet still crisp.

57. Mercury’s winged sandals : TALARIA
The winged sandals of the Greek messenger god Hermes, and his Roman equivalent Mercury, as called the talaria. The name comes from the Latin “talaris” meaning “of the ankle”.

62. Cash in a country bar : ROSANNE
Rosanne Cash is the eldest daughter of Johnny Cash, and is a successful singer in her own right.

63. Parallel bars? : UPC CODE
UPC stands for Universal Price Code or Universal Product Code. The first UPC-marked item to get scanned in a store was on June 26, 1974 at 08:01 a.m. at Marsh’s supermarket in Troy, Ohio. It was a 10-pack of Wrigley’s Juicy Fruit chewing gum …

2. Annual heavy metal tour : OZZFEST
Ozzfest is a festival tour held annually that was founded by Ozzy and Sharon Osbourne. As one might expect, it’s a heavy metal and hard rock event.

3. Big name in browsers : MOZILLA
Open-source software has the source code available to users and is not protected by copyright. The intent is to allow collaboration in the development of the software in the hope of producing a better product. One of the more famous examples of an open-source product is the Mozilla Firefox Internet browser that some of you may be using to read this blog.

7. Trapezius neighbor : DELTOID
The deltoid muscle (delt) is actually a group of muscles, the ones that cover the shoulder and create the roundness under the skin. The deltoids are triangular in shape resembling the Greek letter delta, hence the name.

The trapezius is a muscle in the neck and upper back that moves the shoulder blade and supports the arm.

10. Rowlands of “A Woman Under the Influence” : GENA
Gena Rowlands is an actress best known for the films made with her husband, actor and director John Cassavetes. More recently, Rowlands played a lead role opposite James Garner in the weepy, weepy 2004 film “The Notebook”. “The Notebook” was directed by her son, Nick Cassavetes.

12. Beverage with a triangular logo : BASS ALE
The red triangle on the label of a bottle of Bass Ale was registered in 1875 and is UK Registered Trade Mark (TM) No: 00001, the first trade mark issued in the world.

14. Kindles, e.g. : READERS
I finally bought myself a Kindle Fire HD not too long ago. I’ve started reading e-books for the first time in my life. I’ve always been behind the times …

24. Bleeth of “Baywatch” : YASMINE
Yasmine Bleeth is a former actress who is known for playing Caroline Holden on the TV show “Baywatch”, and Lee Anne Demerest on the soap opera “One Life to Live”.

26. Avon competitor : MARY KAY
Mary Kay Ash founded her skincare and cosmetics company, somewhat ominously on Friday 13th, 1963. In 1968, Mary Kay Ash bought herself a pink Cadillac, specially painted to match the color of one of her compacts. The car became so famous that she gave away five of them to her top saleswoman, a tradition that endures to this day.

34. URL ender : EDU
The .edu domain was one of the six original generic top-level domains specified. The complete original list is:

37. Japanese electronics giant : FUJITSU
The Japanese company Fujitsu is the third-largest IT service provide in the world, after IBM and HP. It is also the second-oldest IT company, after IBM, having been founded in 1935 as Fuji Telecommunications Equipment Manufacturing.

41. “Cloud Shepherd” sculptor : JEAN ARP
Hans Arp was a French artist renowned for his work with torn and pasted paper, although that wasn’t the only medium he used. Arp was the son of a French mother and German father and spoke both languages fluently. When he was speaking German he gave his name as Hans Arp, but when speaking French he called himself Jean Arp. Both “Hans” and “Jean” translate into English as “John”. In WWI Arp moved to Switzerland to avoid being called up to fight, taking advantage of Swiss neutrality. Eventually he was told to report to the German Consulate and fill out paperwork for the draft. In order to get out of fighting, Arp messed up the paperwork by writing the date in every blank space on the forms. Then he took off all of his clothes and walked with his papers over to the officials in charge. He was sent home …

“Cloud Shepherd” is a sculpture by the artist Jean Arp that can be seen on the grounds of the University City of Caracas.

43. Producer of a hair-raising experience? : ROGAINE
Rogaine is a brand name for the drug Minoxidil. It was developed as an oral medication to treat high blood pressure, but was found to have an exploitable side-effect. It caused an increased in the rate of hair growth. A topical solution was marketed to promote growth of hair especially in balding men. The drug seems to work well, but when the application is stopped, things go back to normal in about 60 days. Wouldn’t dream of touching the stuff myself …

47. Aldous Huxley’s “___ and Essence” : APE
Aldous Huxley was a writer from England whose best-known work is the novel “Brave New World”. Huxley was noted for his interest in parapsychology and mysticism, as well as for his promotion of the idea of taking psychedelic drugs “in a search for enlightenment”.

54. Best Picture before “12 Years a Slave” : ARGO
“Argo” is a 2012 movie that is based on the true story of the rescue of six diplomats hiding out during the 1979 Iran hostage crisis. The film was directed by and stars Ben Affleck and is produced by Grant Heslov and George Clooney, the same pair who produced the excellent “Good Night, and Good Luck”. I saw “Argo” recently and recommend it highly, although I found the scenes of religious fervor pretty frightening …

55. Wife of Albert Einstein : ELSA
Einstein was Elsa’s family name after she married Einstein, and also beforehand. Elsa and Albert were first cousins.