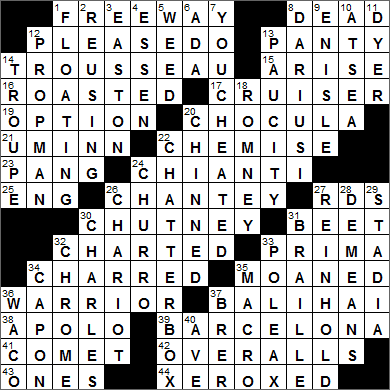 14. Something a bride brings to a marriage TROUSSEAU
A bride’s “trousseau” is the collection of clothes, linens and other soft furnishings that she brings into a marriage. The term comes from the Old French “trousse” meaning “bundle”.

17. Black-and-white CRUISER
A police car is often referred to by the slang term “black and white”, a reference to the vehicle’s common paint scheme.

20. Count at the breakfast table CHOCULA
General Mills have introduced us to a whole series of monster-themed breakfast cereals, starting in 1971 with Count Chocula and Franken Berry. They followed them up with Boo Berry, Fruit Brute and Fruity Yummy Mummy.

21. Golden Gophers’ sch. UMINN
Goldy Gopher is the mascot of the sports teams of the University of Minnesota. The teams themselves are known as the Golden Gophers. The mascot comes from Minnesota’s nickname, “The Gopher State”, a nickname that dates back to 1857.

22. Woman’s shift CHEMISE
A modern “chemise” is a female undergarment or perhaps a loose-fitting dress. “Chemise” is a French term, one that today is used for a shirt.

24. Italian red CHIANTI
Chianti is a red wine from the Chianti region of central Tuscany in Italy. Historically, Chianti was stored in a characteristically bulbous bottle wrapped in a straw basket. However, the pragmatists have won the day and regular wine bottles tend to be used nowadays.

25. Bath site: Abbr. ENG
Bath is a beautiful city in South West England of which I have very fond memories. Bath is an old Roman spa town, and the city’s name comes from the Roman baths that have been excavated and restored.

26. Number 10-Down CHANTEY
A sea shanty (also “chantey”) is a song sung by sailors, often when they are working away on some repetitive task. “Shanty” might be derived from the word “chanter”, the French for “to sing”.

30. Indian condiment CHUTNEY
A chutney is typically southern Asian condiment, made from spices with vegetables or fruit. The term “chutney” comes from the Sanskrit “caṭnī” meaning “to lick”.

36. Mars, notably WARRIOR
Mars was the god of war in Ancient Rome. Mars was viewed as the father of the Roman people, and the father of Romulus and Remus, the twin brothers who founded Rome according to Roman mythology..

37. 1949 show tune with the lyric “Here am I, your special island!” BALI HAI
The song “Bali Ha’i” is from the musical “South Pacific” by Rodgers and Hammerstein. In the musical, Bali Ha’i is the name of a volcanic island that neighbors the island on which the story takes place.

38. Olympian’s first name that sounds like another Olympian’s name APOLO
Speed-skater Apolo Ohno has won more Winter Olympics medals than any other American. Ohno also did a great job winning the 2007 season of television’s “Dancing with the Stars”.

In Greek and Roman mythology, Apollo was the son of Zeus and Leto, and the twin brother of the goddess Artemis.

39. Site of the largest sports arena in Europe BARCELONA
Camp Nou is a football stadium that is home to Futbol Club Barcelona. It is the largest stadium in Europe, with a capacity of 99,354.

41. Cupid’s teammate COMET
We get the names for Santa’s reindeer from the famous 1823 poem called “A Visit from St. Nicholas”, although we’ve modified a couple of the names over the years. The full list is:

44. Quickly reproduced XEROXED
Xerox was founded in 1906 in Rochester, New York and originally made photographic paper and equipment. Real success came for the company in 1959 when it introduced the first plain-paper photocopier. Xerox named Ursula Burns as CEO in 2009, the first African American woman to head up a S&P 100 company. Burn was also the first woman to succeed another female CEO (replacing Anne Mulcahy).

Down
3. City where the Lehigh and Delaware Rivers meet EASTON
The Lehigh Valley metropolitan area in Pennsylvania is primarily composed of the three cities, Allentown, Bethlehem and Easton.

4. Scene of W.W. II airstrikes ESSEN
Essen is a large industrial city located on the River Ruhr in western Germany.

8. Persian ruler dubbed “the Great” DARIUS I
Darius the Great ruled the First Persian Empire at its height, from 522 to 486 BCE.

13. Dearth PAUCITY
“Paucity” is a scarcity, a smallness of quantity. The term derives from the Latin “paucus” meaning “few, little”.

24. Spanish/Mexican pastry CHURRO
A churro is pastry made from fried dough, and is sometimes called a Spanish doughnut. Churros are often served for breakfast when they are dipped in hot chocolate or milky coffee.

27. Judge of movies REINHOLD
The actor Judge Reinhold is best known for his film appearances, mainly in the “Beverly Hills Cops” series, “Ruthless People”, “Fast Times at Ridgemont High” and “The Santa Clause” movies. “Judge” is a stage name, as he was born Edward Reinhold, Jr.

30. River that flows past four universities CHARLES
The Charles is the river that flows through Boston. Originally known as the Massachusetts River, the name was changed by Charles I, who named it for himself.

31. Touch-type? BRAILLE
The Braille system of reading and writing was devised in 1825 by Louis Braille, who was himself afflicted with blindness. Braille characters are composed of six positions or dots, each arranged in two columns of three dots each. Every dot can be raised or not raised, given a total of 64 possible characters.

33. Low-tech hacker? POLEAX
A pollaxe (also “poleax”) is a medieval weapon. As one might expect, it is an axe on a pole. The pole could be anything from 4 to 8 feet in length.

34. Dinner chicken CAPON
A capon is a castrated cockerel (poor guy!). Castration has a profound effect on the bird (duh!) making the meat more tender to eat when it is slaughtered.

35. Certain shortcut MACRO
A macroinstruction (usually shortened to “macro”) is a set of instructions in a computer program that are abbreviated to one simple command.

36. Only major U.S. city with a radio station whose call letters spell the city’s name WACO
WACO-FM is a local station in Waco, Texas. The station’s byline is “WACO 100, a station so big they named the entire city after it.” WACO is the only major city with call letters that spell out the name of the city, although the smaller town of Ware in Massachusetts has an AM station with the call letters WARE.

37. Title in children’s literature BR’ER
Br’er Rabbit and Br’er Fox are characters in the Uncle Remus stories, written by Joel Chandler Harris. The Uncle Remus stories are adaptations of African American folktales that Harris collected across the Southern States. “Br’er” is an abbreviated form of “brother”.

40. Hail and farewell AVE
“Ave” is a Latin word meaning “hail” as in “Ave Maria”, which translates as “Hail Mary”. “Ave” can also be used to mean “goodbye”.